If actions to mitigate climate change are not taken and global temperatures continue to rise in line with current trends, by 2030 the Arctic may be free of sea ice during the summer. This opens up a number of new routes for shipping, an opportunity China is currently moving to take advantage of with a series of development projects.

There are three potential routes across the Arctic: the northeast passage around Eurasia, the northwest passage around North America and the central Arctic ocean route. For China, they offer a shorter and cheaper alternative to current shipping routes, which reach major markets in Europe via the Indian ocean and the Suez canal. 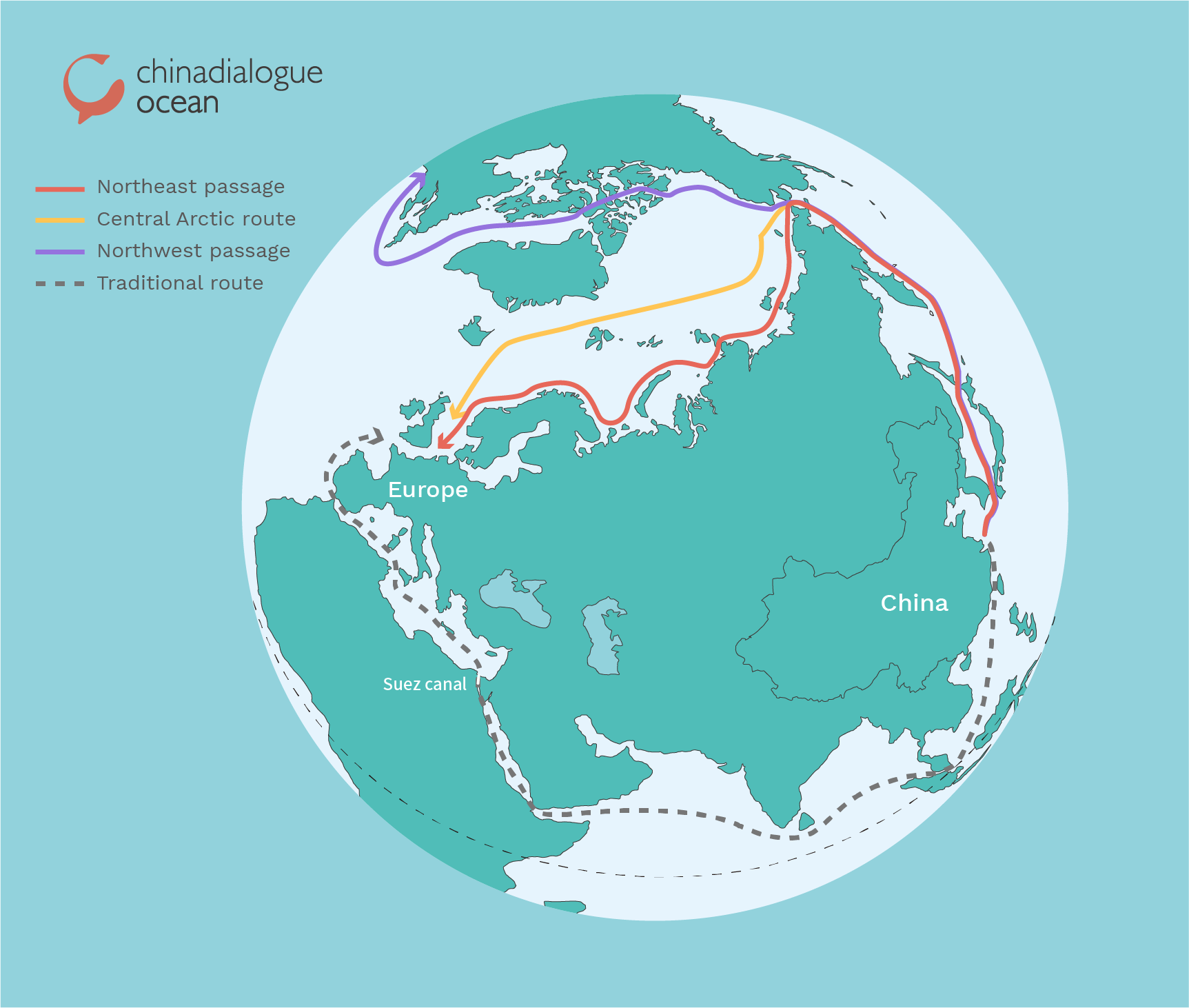 Identified as a focus of the Belt and Road Initiative (BRI) in June 2017, China’s interest in these Arctic routes is based on more than transporting trade goods. The melting sea ice is also making it more feasible to access the Arctic’s abundant oil and gas reserves, the majority of which have been identified in Russia. Of the three Arctic routes, ice along the northeast passage, which follows Russia’s coastline, is melting the fastest.

The idea of working with Russia to turn this route into an “Arctic Silk Road” was first proposed by China in July 2017. As the list below shows, the focus of most of the projects that will form the backbone of this economic cooperation is shipping and energy. But investment is also going into scientific research. As China underlined in its Arctic policy, published in January 2018, understanding the region’s changing environment is a key concern.

Because while the melting of sea ice opens up new opportunities, development in the region also opens up threats to the environment. There are widespread worries about disasters caused by oil spills or collisions once shipping lanes are open. Harmful air pollution is also a concern, and environmentalists have called for a ban on heavy fuel oil in the region. The Chinese government is keen to express its shared concern for these issues, stating in its Arctic policy that “both protection and development must be considered, with current and long-term interests balanced, and sustainable development promoted.”

Chinese shipping firms handle LNG cargos bound for China. In July 2018, seven months after operations started, the first shipment of LNG from Yamal arrived in Jiangsu province’s Nantong. A second phase of the project is now being constructed on the Gydan peninsula, to the east of Yamal, and due to begin operating in 2023.

In June 2019, the China National Chemical Engineering Group and Russian firm Neftegazholding signed a deal on developing the Payakha oilfield, promising investment of US$5 billion over four years.

This is Russia and China’s second Arctic Silk Road energy project after Yamal. Payakha lies on the Taymyr peninsula in the region of Krasnoyarsk. According to reports, the project includes the construction of six crude oil processing facilities, a crude oil port capable of handling 50 million tonnes a year, 410 kilometres of pressurized oil pipelines, a 750-megawatt power station and an oil storage facility.

Located just southwest of Vladivostok and close to the Chinese border, the port of Zarubino is ice free year-round. In 2014, the government of Jilin province, the China Merchants Group and Russia’s largest port operator signed a framework deal to develop Zarubino into the biggest port in northeast Asia over 18 years, with capacity to handle 60 million tonnes of goods a year. Railways linking the port with inland regions of China will also be built.

In September 2018, as the first stage of this project, a shipping route started running from Hunchun on the Tumen river in Jilin to Zarubino and then on to Zhoushan in Zhejiang province. The new Zarubino port will strengthen links between northeast China and the rest of the world, and aid development in Russia’s far east. It will also be a key link on the northeast passage trade route to Europe.

Arkhangelsk is the largest city on Russia’s northern coast, situated on the country’s European side close to Finland. The new deepwater port has been planned for over a decade. It will be located 55 kilometres from Arkhangelsk on the island of Mud’yug, which lies in the Dvina river delta close to existing port infrastructure. Linking up with Russia’s railway network, the port will help develop a combined sea–land transportation system, and improve links to Siberia.

The local government predicts the new port and associated railways will create 40,000 jobs in the region. According to one expert, the China Poly Group signed an agreement of intent in 2016, earmarking investment of 550 million yuan (US$79 million). The China Ocean Shipping Company has also made its interest in the project clear.

In April 2018, China’s Institute of Remote Sensing and Digital Earth signed an agreement with Finland’s Arctic Space Centre to establish a new monitoring and research centre for the polar region. The facility, based in northern Finland’s Sodankylä, will collect, process and share satellite data, providing an open international platform to support climate research, environmental monitoring and Arctic navigation.

The centre will contribute to China’s “Digital Silk Road” plan, which aims to create a spatial information system for regions covered by the BRI. It will also promote the Chinese Academy of Sciences’ “Global Three Poles Environment” project, which aims to better understand global climate change.

The project was inaugurated in October 2018.

In October 2018, the China–Iceland Arctic Science Observatory was officially opened in the city of Karholl in northern Iceland.

Set up to monitor climate and environmental change in the Arctic, the observatory is managed by the Polar Research Institute of China and Iceland’s Institute of Research Centres. It can accommodate 15 people and will also be open to researchers from third countries.

The partnership started in 2012 when the two governments signed a deal on Arctic cooperation. That year also saw a memorandum of understanding signed between organisations from the two countries on a joint aurora observatory. Plans were expanded in 2017, with work at the observatory now covering the atmosphere, the oceans, glaciers, geophysics, remote sensing and biology.

Heavy fuel oil has no place in Arctic shipping