“Where there’s muck there’s brass”, goes an old saying from northern England. Brass is slang for money, and those with a lot of it are today eyeing up with great interest a particular type of muck. Muddy, smelly, shoe-sucking sediment full of what’s known as blue carbon.

The latest buzzword in climate finance, blue carbon is the carbon stored in the ocean, particularly coastal ecosystems, such as mangrove swamps, salt marshes and seagrass meadows. It takes the form of organic matter, mainly decaying plant leaves, wood, roots and dead animals, captured under sediment and stored sometimes for thousands of years.

Just like with forests and tree-planting on land, markets are developing for the protection and restoration of these carbon-heavy environments as a way to mitigate climate change.

Swamps haven’t been sexy for a long time

“There’s so much appetite for blue carbon projects,” says Peter Macreadie, an environmental scientist at Deakin University, Australia. “Massive corporates and nations have woven blue carbon into their abatement plans and portfolios.” Apple and Gucci are among the high-profile brands to have invested in blue carbon schemes.

It’s a remarkable turnaround. For decades, environmental campaigners have tried and largely failed to secure protection for these coastal ecosystems. As well as reducing the force of onshore storms, they boost biodiversity and provide food and livelihoods.

“Swamps haven’t been sexy for a long time,” says Sebastian Thomas, who works on sustainability at Curtin University in Australia. “But in the last 10 or 15 years, communities of scientists, of NGOs, of activists, have been really pushing and saying, ‘Look, this stuff matters.’”

Late last year, an international team of scientists produced the first estimates of just how much it matters. They calculated that the three key marine habitats – seagrass, mangrove and marsh – may together store more than 30 gigatonnes of carbon. That’s about three times the amount emitted in China each year.

Adding to that capacity by restoring degraded and lost blue carbon ecosystems could soak up an extra 0.8 gigatonnes of carbon each year by 2030, the researchers estimated – or roughly 3% of global emissions.

What can be measured can be managed, and blue carbon is steadily being drawn into carbon accounting schemes. Some countries have begun including it in their Nationally Determined Contributions (NDCs) to the Paris Agreement, which quantify efforts to reduce emissions and adapt to the impacts of climate change.

“It’s not obligatory [for countries to account for blue carbon], but the guidance is there for them to do it. And the USA and Australia are already doing it,” says Hilary Kennedy, a marine biogeochemist at Bangor University in the UK. Kenya is another country accounting for blue carbon in its NDC inventory.

Under guidelines co-published by several organisations working on blue carbon, including the IUCN (International Union for Conservation of Nature) and UNESCO, countries are allowed to report reductions in their carbon emissions if they work to restore blue carbon systems. “In the UK, we’ve drained some of our marshes. So, we could allow the tide to flow back in again and that would be restoration,” Kennedy adds.

Projects to protect and restore blue carbon ecosystems are also some of the hottest carbon offsets right now. In such schemes, companies and individuals who want to compensate for their carbon pollution can pay someone else to either not emit an equivalent amount, or to make some change that will absorb that amount from the atmosphere in future.

In theory, the sale of blue carbon offset credits could channel much-needed funds into projects across the world that seek to restore coastal ecosystems, both preventing carbon being released into the atmosphere and soaking up further carbon.

For example, huge stretches of former shrimp-farming sites in Indonesia now lie derelict. They could be converted back to productive mangrove swamps, but it’s no quick fix. “You have to be pretty ballsy to get the early projects up and running. You might be spending a few million dollars, and then you’re sitting there waiting over many years to see the carbon accumulate,” Macreadie says. 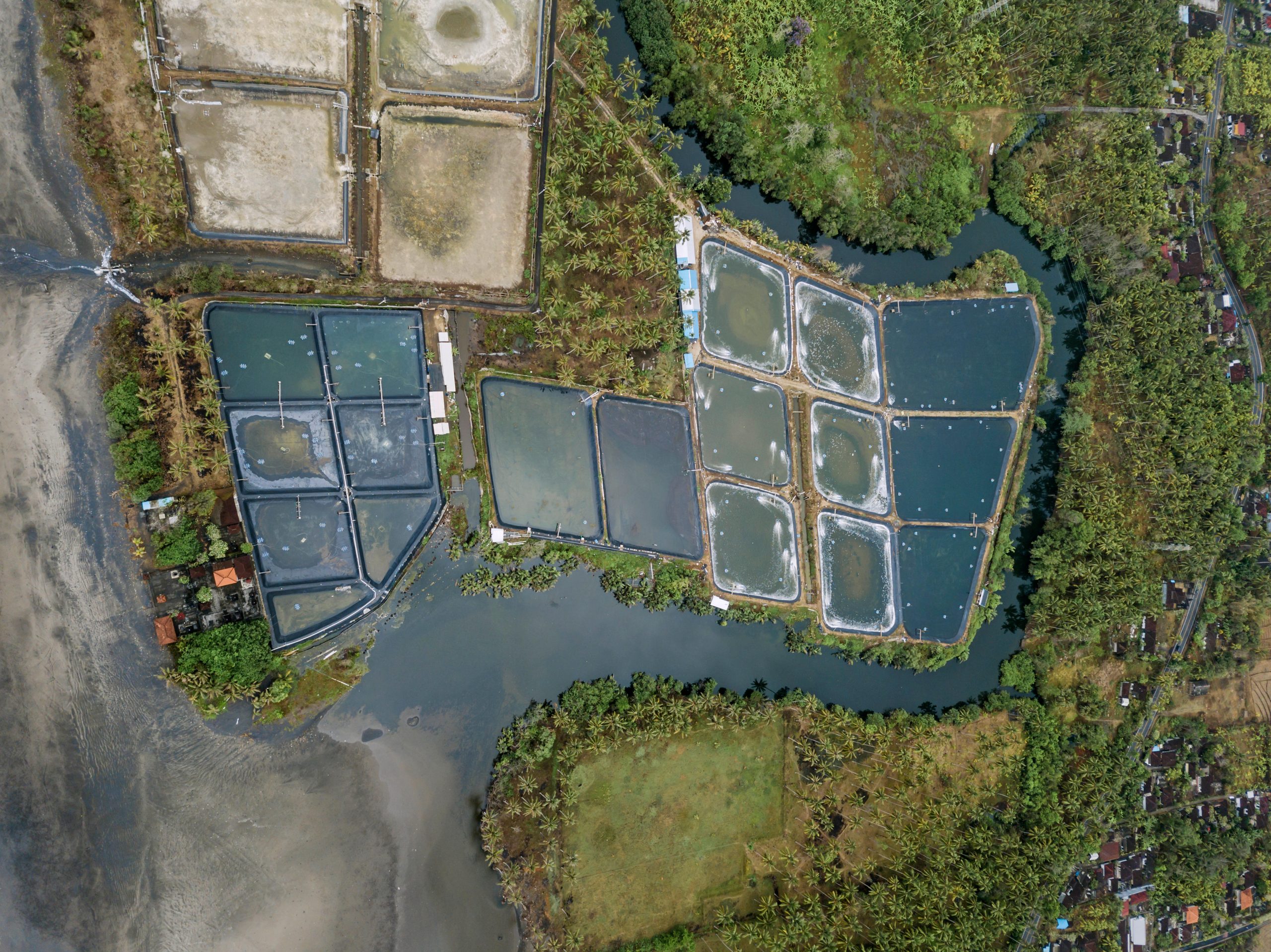 Shrimp farms in Indonesia. Cultivating the crustacean has destroyed swathes of mangrove across the world. Some blue carbon offset projects are now trying to turn abandoned shrimp farms back to mangrove. (Image: Alamy)

A few blue carbon projects are already up and running. One on Colombia’s Caribbean coast, set up with the help of Conservation International and Apple Inc, to conserve and sustainably manage a coastal mangrove ecosystem, issued its first carbon credits last year. But global demand for blue carbon credits massively outstrips supply, Macreadie points out.

Like all offsets, blue carbon credit schemes are criticised for being greenwash. “You shouldn’t let anybody convince you or say that this is the silver bullet to solve climate change, because it’s not. The opportunity is actually quite limited,” says Cath Lovelock, an expert on the ecology of coastal plant communities at the University of Queensland, Australia. “And it might allow polluters to keep polluting. It’s like: ‘Watch my beautiful blue carbon project over here, while I’m not doing anything about my emissions over there.’”

Despite such concerns, moves are being made to expand the scope of blue carbon projects, and so increase the flow of finance and carbon credits, such as by selling credits for farmed seaweed. The concept has also been taking off in China, whose long coastline is home to a diverse range of blue carbon ecosystems – degraded in recent decades, but now targets for restoration. “The Chinese want to call everything blue carbon,” Thomas says. “They want to do algae and all kinds of stuff.”

On the first day of this year, China completed its first carbon sink fishery trade, in Lianjiang, Fujian province. The 15,000-tonne saltwater “aquaculture carbon credit” was verified by the Ministry of Natural Resources. The type of aquaculture involved wasn’t revealed but seaweed and shellfish farming account for 90% of Lianjiang’s aquaculture output. As yet, China has no verification standards for carbon capture and storage during the farming of seaweed or shellfish, which themselves involve carbon emissions and ultimately harvesting and consumption. Currently, the IPCC (Intergovernmental Panel on Climate Change) only recognises mangrove swamps, seagrass meadows and salt marshes as coastal carbon stores suitable for management and trading.