At last year’s COP26 climate summit in Glasgow, 22 countries, including the UK, US, Germany and Japan, signed up to the Clydebank Declaration, announcing their intention to establish various zero-emissions shipping routes known as “green corridors”. By 2025, the aim is to have set up at least six such corridors, which would each run between two or more ports. By 2030, it is hoped many more routes will be operational.

Ships emit over 1 billion tonnes of greenhouse gases every year, or just under 3% of global emissions, according to the International Maritime Organization, the UN body responsible for shipping. Without further action, shipping emissions are projected to rise by at worst 30% by 2050, compared to 2008 levels.

Global shipping emissions need to reach net zero by mid-century to achieve the Paris Agreement goals. To date, the IMO has set an emissions reduction target of just 50% by 2050 compared to 2008 levels, which campaigners say is insufficient to help limit global heating to 1.5C above pre-industrial levels.

Dissatisfied by the IMO’s slow decision-making, countries are taking matters into their own hands by establishing green corridors. These aim to accelerate the uptake of zero-emissions fuels on vessels travelling between major shipping hubs and establish the necessary regulation, infrastructure and technology.

“In practice, you’re creating a special economic zone,” said Aparajit Pandey, shipping lead at the Energy Transitions Commission. “It’s a targeted area where fuel production and port infrastructure can be built up super quickly and efficiently and where safety procedures and regulations can be put in place.”

The agreements between countries and ports will allow governments to provide targeted support to an industry that is otherwise governed internationally by the IMO, Pandey said.

The green corridors will allow countries to identify which decarbonisation solutions are scalable, said Katherine Palmer, shipping lead on the UN High-Level Climate Champions team. They are a “testbed” that provide “an evidence base to show policymakers what is possible,” she said. “They give them confidence in what can be done.”

One of the major challenges facing the shipping industry is that zero-emissions fuels are currently not cost competitive. An average carbon price of just under US$200 per tonne of CO2 is needed to bridge the competition gap and fully decarbonise the shipping industry by 2050, according to analysis by the University Maritime Advisory Services (UMAS), which is partnered with University College London’s (UCL) Energy Institute.

“There’s no incentive to switch to new fuels and build zero-emissions vessels now. Declarations like Clydebank are trying to create those incentives but they are not enough in themselves,” said Aoife O’Leary, a long-time IMO observer and head of Opportunity Green, a non-profit focusing on international climate issues, including shipping. “But they will help build up momentum for policy that can make it happen,” she said.

The green corridors aim to incentivise the uptake of zero-emissions fuels by putting pricing mechanisms in place. This could be in the form of subsidies initially, such as feed-in tariffs, and eventually through carbon pricing, said Palmer.

The two fuels that will power green corridors are methanol and “green” ammonia, which are both deemed to be zero-carbon if they are generated from renewable sources. “In the near term, methanol is the better fit because there’s availability, but in the long term, green ammonia is likely to be the fuel of choice for decarbonising the shipping industry,” said Pandey.

The cost to build new vessels and convert existing ones to run on methanol is significantly lower than for alternative zero-carbon fuels. Ammonia, which is a compound of nitrogen and hydrogen, contains no carbon and so does not emit any CO2 when used to fuel an internal combustion engine.

Zero-emissions vessels will also require huge amounts of new infrastructure to produce and store the fuels and allow ships to refuel at ports. And the production of sustainable fuels must ramp up. Currently less than 0.2 million tonnes of renewable methanol is produced annually and ammonia production relies heavily on fossil fuels.

Both methanol and ammonia are derived from hydrogen, so countries will need to invest in electrolysers and renewable energy capacity, mainly wind and solar, to produce these fuels, as well as battery and hydrogen storage, said Pandey. Most of this will have to be built at or near the participating ports, as hydrogen is costly to transport.

China is the world’s largest shipbuilder and the country with the largest shipping fleet, but noticeably did not sign up to the Clydebank Declaration in Glasgow. Xiaoli Mao, a senior researcher on the marine programme team at the International Council on Clean Transportation (ICCT), said this fits with China’s view that plans to reduce maritime emissions should be decided under the IMO rather than the UN Framework Convention on Climate Change, which convened COP26.

“We anticipate that China will focus on improving energy efficiency of its fleet, but we do hope they consider measures to transition to low-carbon shipping fuels and zero-emission vessels,” Mao said.

Despite not joining the declaration, China is participating in the first green corridor. The ports of Los Angeles and Shanghai agreed in January to work on developing a plan for a zero-emission route by the end of 2022.

The Trans-Pacific corridor, as it is known, is the world’s busiest cargo route. In 2020, ships moved 31.2 million 20-foot unit containers – 21% of the world’s total – across the Pacific Ocean. Katherine Palmer said the corridor has strong first-mover potential because it carries out liner trade, which means goods are transported along a fixed route on a regular schedule.

Similar initiatives are being explored. A working paper by the ICCT analysed the technical feasibility of a zero-emissions container corridor running on hydrogen fuels cells between Shenzhen and Long Beach, a similar but longer route than LA–Shanghai. It concluded that 99% of the voyages it studied – all those that travelled the route in 2015 – could be powered by hydrogen, “with only minor changes to fuel capacity or operations”.

One vital change is the need for ports to identify refuelling points en route, as alternative fuels do not have the range of fossil fuels, said Elise Georgeff, an associate researcher on the ICCT’s marine programme team. For the Shenzhen–Long Beach route, she points to the Aleutian Islands, off the coast of Alaska, as a natural halfway point for refuelling.

It is still early days for the green corridor concept but work to identify and promote other potential routes is underway. These include the Australia–Japan iron ore corridor and the Asia–Europe container corridor, according to the “Next Wave: Green Corridors” report, published by the Global Maritime Forum and World Economic Forum and co-authored by Pandey.

The Australia–Japan corridor is one of the largest dry bulk trade routes, with 65 million tonnes of iron ore exported annually between the countries. Australia is already investing heavily in hydrogen and has announced plans to build 29 gigawatts of electrolyser capacity by 2030, much of it near major ports, the report notes. 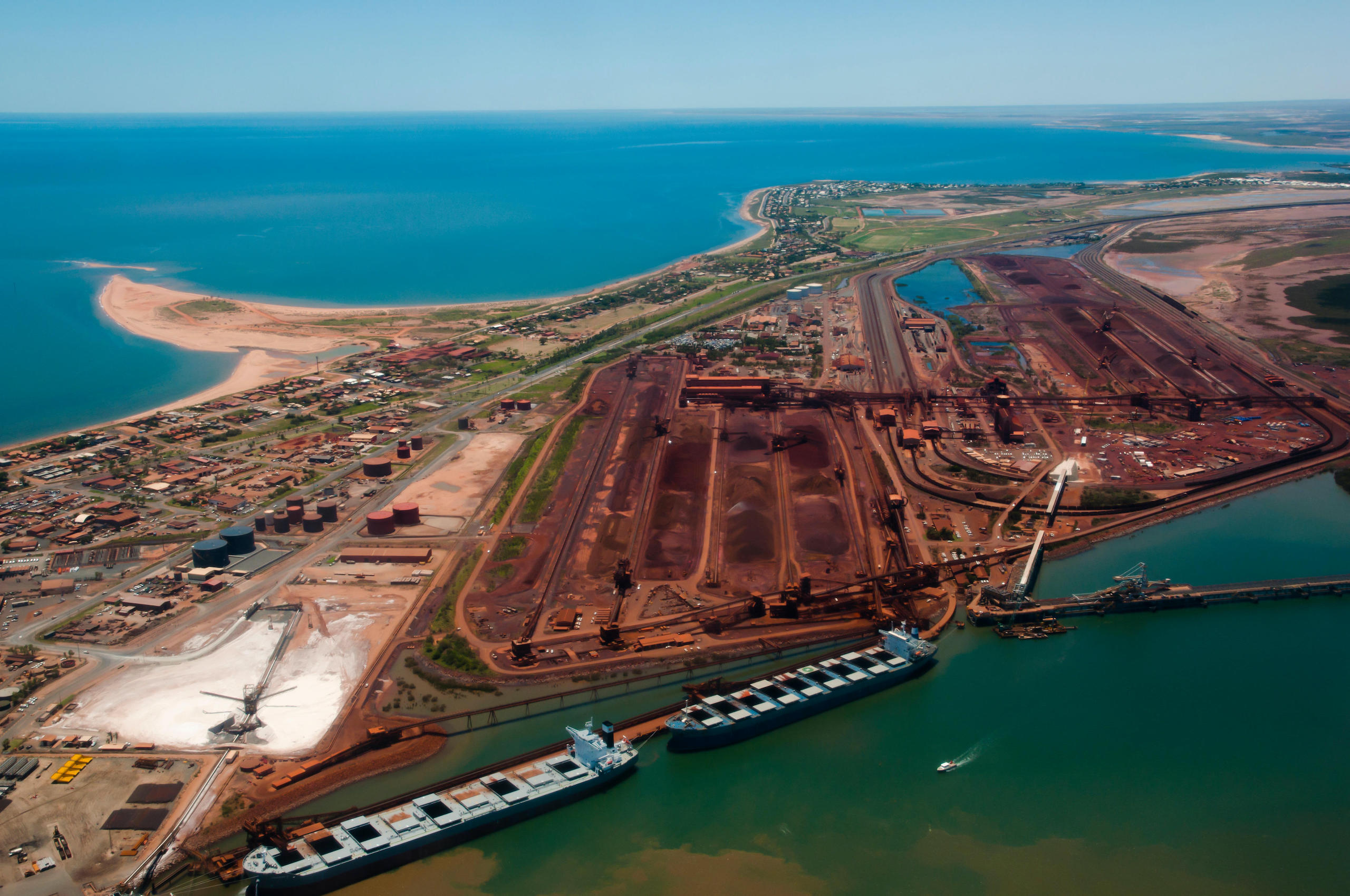 Sixty-five million tonnes of iron ore are exported between Australia and Japan each year. Australia is investing heavily in hydrogen production capacity, much of it near major ports such as Port Hedland. (Image: Adrian Wojcik / Alamy)

The Asia–Europe corridor is among the largest shipping routes in the world and is currently responsible for generating more emissions than any other trade route. It has multiple potential refuelling ports across the regions en route that make it suitable for being a green corridor, with more than 60 gigawatts of announced hydrogen electrolyser capacity by 2030, according to the report.

Pandey also points to the large cast of cargo owners and companies that are “eager to reduce their emissions” along the route. “That could be really helpful in setting up a green corridor,” he added.

Palmer said that more intra-European green corridors should be expected within the next decade. The European Union has been leading the way in decarbonising its shipping industry through a range of measures, including a sustainable fuel mandate within the EU and the inclusion of maritime emissions in the bloc’s emissions trading scheme (ETS).

Could the IMO get side-lined? “There is a significant role for the IMO going forward in regulating shipping internationally and around the long-term goal to reduce greenhouse gas emissions from shipping,” Palmer believes.

According to O’Leary, green corridors can help build momentum for action at the IMO, which moves more slowly as it operates by consensus.

“The more green corridors we see, the more the IMO will do, and the more national and regional governments will move forward with policy,” she said.

“There’s this whole ecosystem that is starting to come together. It’s really great to see it coming to fruition.”