Small island states and countries in the global south are leading the way in putting ocean solutions into national climate plans submitted to the United Nations, ocean advocates say.

After years of calling for greater ocean protection to fight climate change, campaigners are seeing some “encouraging” signs, as a study showed that an increasing majority of coastal countries are presenting at least one ocean-based solution in their latest climate plans.

But they say the progress is far from enough.

Ahead of the UN COP27 climate summit in Egypt this month, the ocean community aims to ensure this trend of “blueing” climate plans continues. More importantly, they want to guarantee countries are delivering on ocean actions, and not just talking.

Some positive progress has been seen in coastal countries’ climate plans, says Anna-Marie Laura, director of climate policy at Ocean Conservancy, a nonprofit based in Washington DC.

“There are quite a few mentions of ocean and coasts, and the connection between the health of the ocean and climate change,” she says.

Under the 2015 Paris Agreement, countries pledged to submit and update their national climate plans, known as nationally determined contributions (NDCs), to the UN Framework Convention on Climate Change (UNFCCC) every five years.

The UN received NDCs from 192 countries in the first round. After the pandemic delayed the second round of submissions, 147 countries have submitted new or updated NDCs, as of 4 November.

Last year, Ocean Conservancy analysed the NDCs of 62 coastal countries submitted in advance of the UN’s COP26 summit in Glasgow. The study showed that 85% of these countries included plans that touched on at least one of the climate solutions the ocean can provide.

Campaigners are also seeing more tangible promises in the second round of NDC submissions.

Loreley Picourt, executive director of the Ocean & Climate Platform, an alliance of nearly 100 ocean-focused organisations, says countries are moving forward from merely referencing ocean vulnerabilities, such as acidification, as was common in the first round of NDCs. In many updated submissions, countries laid out concrete measures and even nailed down measurable targets. For instance, in Chile’s latest NDC, the country has set specific targets such as designating at least 20 coastal wetlands as new protected areas by 2025.

Among the basket of ocean solutions, most of the coastal countries lean toward protecting and restoring blue carbon ecosystems.

Ocean Conservancy’s analysis found that some 75% of the countries that mentioned the ocean in their NDCs have committed to protecting coastal ecosystems, such as mangroves, salt marshes and seagrasses, which can sequester and store blue carbon.

Behind the wave of commitments, non-state actors, such as the International Union for Conservation of Nature (IUCN), have been campaigning and working closely with countries to launch blue carbon projects.

“But it is not enough,” the Ocean Conservancy’s Laura says. She highlights the relatively scarce mentions in NDCs of offshore renewable energy as climate solutions, compared to the prevalence of protection and restoration of blue carbon ecosystems.

Actions such as expanding offshore renewable energy and enhancing a blue economy were less common in the NDCs studied for the report, with only a handful of the 62 coastal nations analysed referencing such approaches.

She suggests that countries should look to overcome these challenges through multilateral cooperation and technology transfer, as the urgency of climate change doesn’t allow us to “leave any solutions on the table.”

Who are the ocean champions?

Small island states and countries in the global south are leading the way in raising the profile of the ocean as a climate solution.

The study by Ocean Conservancy found that archipelagic developing states, including Fiji, Cabo Verde and the Seychelles, are among the countries that include the widest range of ocean-based solutions in their NDCs.

For climate-vulnerable island countries, which rely heavily on the ocean for their livelihood, the need to act is “a reality of today, not a problem for tomorrow,” Picourt says.

Apart from strengthening ocean actions in their national plans, they are also pushing for multilateral change. “Seychelles, for instance, has been very forward thinking in terms of all the solutions and also driving political ambitions in the region in East Africa,” Picourt explains. 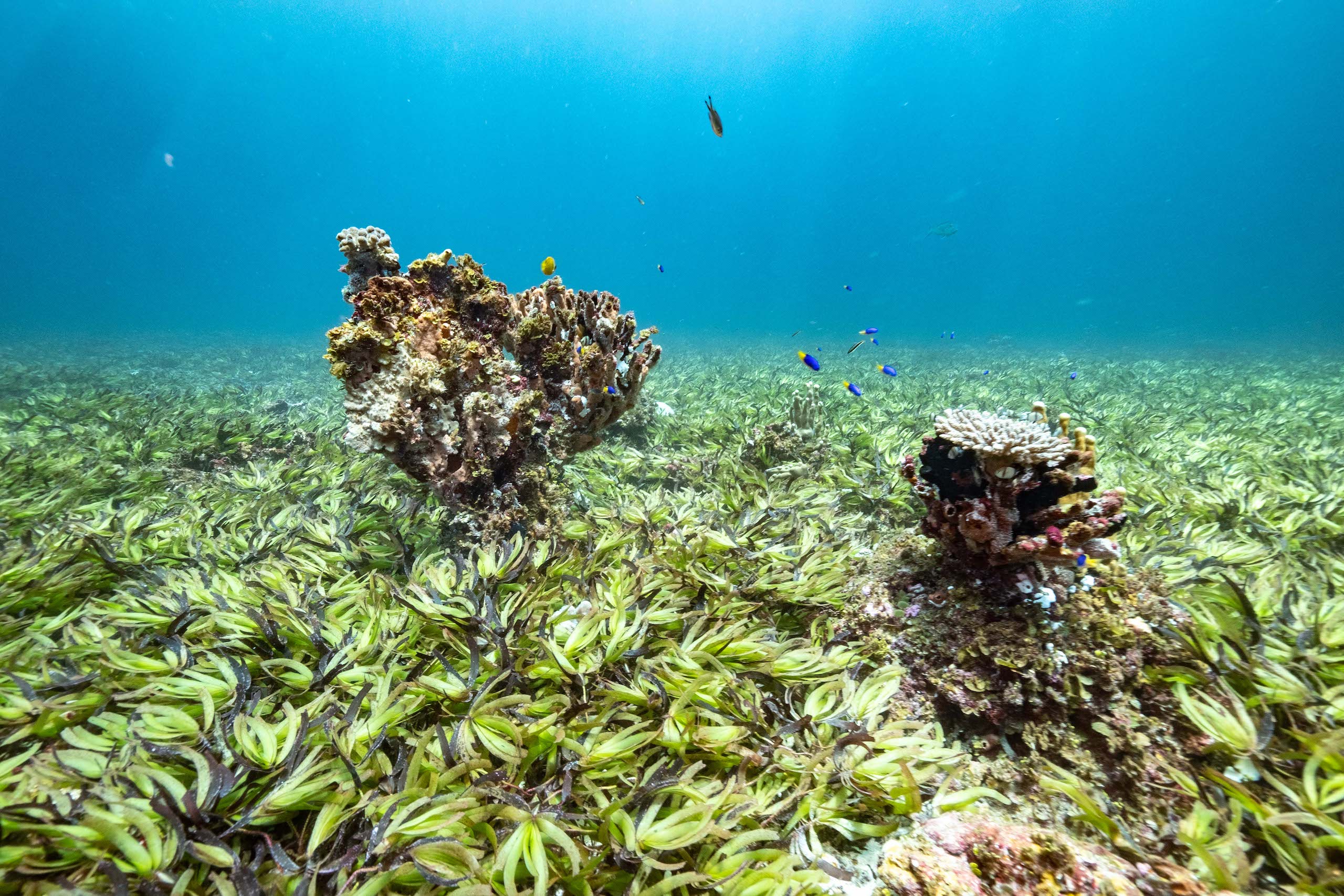 Seagrass and corals on the Saya de Malha Bank. The Saya de Malha Bank is part of the Mascarene Plateau and located between Mauritius and Seychelles in the Indian Ocean. It is the largest seagrass meadow in the world and one of the biggest carbon sinks in the high seas. (Image © Tommy Trenchard / Greenpeace)

Seychelles is leading the Great Blue Wall initiative to build a network of marine protected areas, joined by Western Indian Ocean countries such as Kenya and Mozambique.

Elsewhere, Chile and Monaco, which at the Paris COP in 2015 led the launch of the Because the Ocean Initiative, a coalition of countries committed to enhancing ocean actions in tackling climate change, have also been a major driving force behind the ocean and climate discussions, Picourt says.

Other nations lagging behind

Some countries are falling short when it comes to looking beyond conventional land-based options in their climate strategies. The Ocean Conservancy’s study showed that at least nine coastal countries did not mention any ocean solution in their updated NDCs while some countries only briefly touched on the ocean’s role.

For instance, the European Union, whose 27 member states control exclusive economic zones (EEZ) that together cover a larger area than that of any other nation, made only brief mention of its intention to include wetlands in estimating greenhouse gas emissions and removals, found in the annex of its updated joint NDC.

There are no ocean-related words in the EU’s NDC

“There are no ocean-related words in the EU’s NDC,” Picourt says. “From ‘the ocean’ and ‘marine’, to ‘coastal’ to ‘fish’, not a single one came up.”

Picourt says the EU has sidelined ocean actions as it prioritises reducing emissions from transportation, energy and agriculture in its climate plans. Its policy on the protection of biodiversity, including marine ecosystems, is laid out in a separate biodiversity plan.

She emphasises that the EU and other countries should “take a step back” from traditional environmental governance structures to look at how to bridge their climate and ocean plans.

Though there remains a long way to go, the inclusion of ocean solutions in climate commitments is a sign of hard-won progress, as a result of prolonged campaigning.

Traditionally, climate change policies often serve land-based activities, such as agriculture and forestry. But as the health of the ocean and climate are intricately tied together, scientists and ocean campaigners stress that we cannot isolate the ocean from the UN’s climate efforts.

While the ocean absorbs roughly a third of the carbon dioxide created by human activities and stabilises the global climate, it also provides a vast array of solutions to climate change. Ocean climate solutions could reportedly contribute up to 21% of the annual greenhouse gas emission cuts needed by 2050 to limit warming to 1.5C above pre-industrial levels.

Ocean advocates argue that policymakers should not overlook this potential contribution – and their calls are making headway gradually. After the Chilean presidency put the spotlight on the ocean’s role at COP25 in 2019, which was dubbed “the Blue COP”, the ocean–climate nexus has continued to gain momentum.

The deal that came out of COP26 last year, the Glasgow Climate Pact, carved out a space for discussion on the inclusion of the ocean in the UN climate process.

Picourt says the mandated Ocean and Climate Change Dialogue, which took place this June in Bonn, Germany, was “an important victory”, as it clearly put a comprehensive set of ocean actions on the table for countries to consider.

At the upcoming COP27 in Sharm el-Sheikh, Egypt, Picourt hopes the final agreement of the conference will underpin the calls for more ocean actions – and more funding for them – that were heard during the Bonn dialogue.

Picourt says she is working with Egypt’s environment minister Yasmine Fouad, and is pleased to relay that “the ocean will 100% be featured” by the Egyptian presidency. The nation has in recent years been actively conserving mangroves and corals in the Red Sea.

The ocean community will address the pressing challenges of food and energy security by promoting sustainable aquaculture and offshore renewable energy at COP27, Picourt adds.

Are countries fulfilling their promises?

Ocean Conservancy’s Laura also expects more talks on the implementation of ocean action promises at COP27. She says a lot of eyes will be “looking at what countries have said they were going to do, including in an ocean–climate space, and if it’s actually happening.”

The UN process for appraising the implementation of climate targets, the global stock take, is already underway and will culminate at COP28 in 2023, set to be held in the United Arab Emirates. Laura wants to see ocean and coastal ecosystems incorporated into the assessment process to ensure ocean–climate actions are being reported on and accounted for.

Looking ahead, Laura is “very hopeful” about the ocean playing a bigger role in addressing climate change: “We will see them more and more in NDCs, and in actions happening in countries. They will be contributing as much as possible to solving the climate crisis.”

Who is financing green shipping?

Shipping industry prepares for a future powered by sustainable fuels