To properly map the ocean floor is a long and costly undertaking. Satellites may have already mapped 100% of it, but they have done so in low resolution, missing every feature smaller than 1.5km. So far, only one-fifth has been closely mapped using modern sonar technology, according to UNESCO.

If we consider that the ocean covers more than 70% of the Earth’s surface, that’s a great deal of underwater terrain yet to be well explored. A growing movement is trying to change this. In the last five years, the amount of seafloor mapped in great detail has risen from 6% to 20%. Earlier this year, UNESCO announced it will partner with countries and companies to try and take that up to 80% by 2030. Various technological innovations, such as sonar attached to autonomous vessels, are opening up new avenues for progress towards that goal. 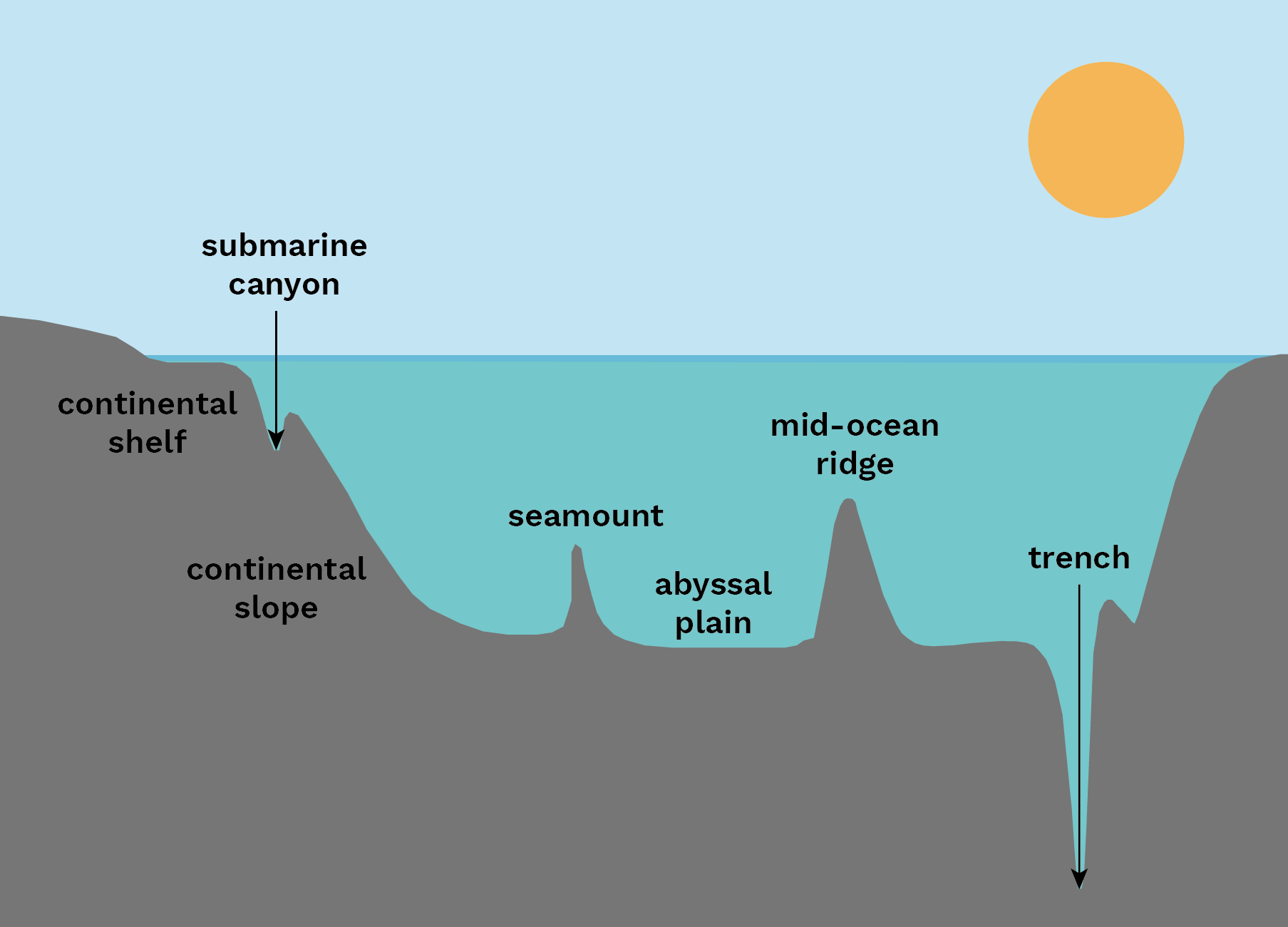 Graphic by China Dialogue Ocean. Based on a figure in The Law of Seabed (2020).

The huge flat bottoms of the deep ocean. Covered by fine-grained sediment like clay and silt, abyssal plains are also peppered with “abyssal hills” and underwater mountains known as seamounts.

The underwater extension of a continent – usually wide along low-lying land and narrow along mountainous coasts.

The sloped bottom of the ocean that extends from the continental shelf down to the abyssal plain.

Mountain ranges on the ocean floor that mark the boundaries between tectonic plates, where magma wells up and new ocean floor is formed.

A mountain, usually formed of volcanoes, rising from the seafloor but not reaching above the surface of the water.

The deepest parts of the ocean, trenches are formed by subduction – when a tectonic plate slides beneath another and forms a steep V-shaped depression. The world’s deepest point lies in the Mariana Trench in the Pacific Ocean. Known as Challenger Deep, it is more than 2,000 metres further from sea level than the Earth’s highest point, Mount Everest.

Narrow, steep-sided valleys that cut into continental slopes. They have steep rocky sides that can be thousands of metres tall. Those of the Grand Bahama Canyon, which are thought to be the highest, rise nearly 5km from the canyon floor. The walls of the Grand Canyon in Colorado, by comparison, measure about 1.6km at their tallest. Submarine canyons are found along continental slopes, unlike trenches, which tend to be deeper down where tectonic plates meet.

The interactive map below shows the locations of some of these features. Click on the circles and lines to find out more about them.

The features were chosen using different criteria: the trenches are some of the deepest in the world; the ridges are some of the longest and highest known in each of the world’s major oceans; while the seamounts and canyons are the largest or best known.

Why is it important to map the ocean floor?

Mapping is a first step towards greater exploration and learning. With high-res maps in hand, scientists can better identify areas where they want to send robots or other equipment to have a closer look. It makes studying the deep ocean easier and more efficient.

The ocean has a lot going on. Oil and gas extraction, fisheries, shipping, and seabed infrastructure constructions like offshore wind farms, are all in progress. High-res ocean floor maps can help with ship navigation, the laying of underwater cables and pipelines, and with making seabed constructions safer.

These maps also show us undersea landforms, like seamounts, that are usually home to rich biodiversity and marine wildlife. Using the data on the maps, we can better track marine animals and find efficacious ways to conserve their habitats and manage fisheries. 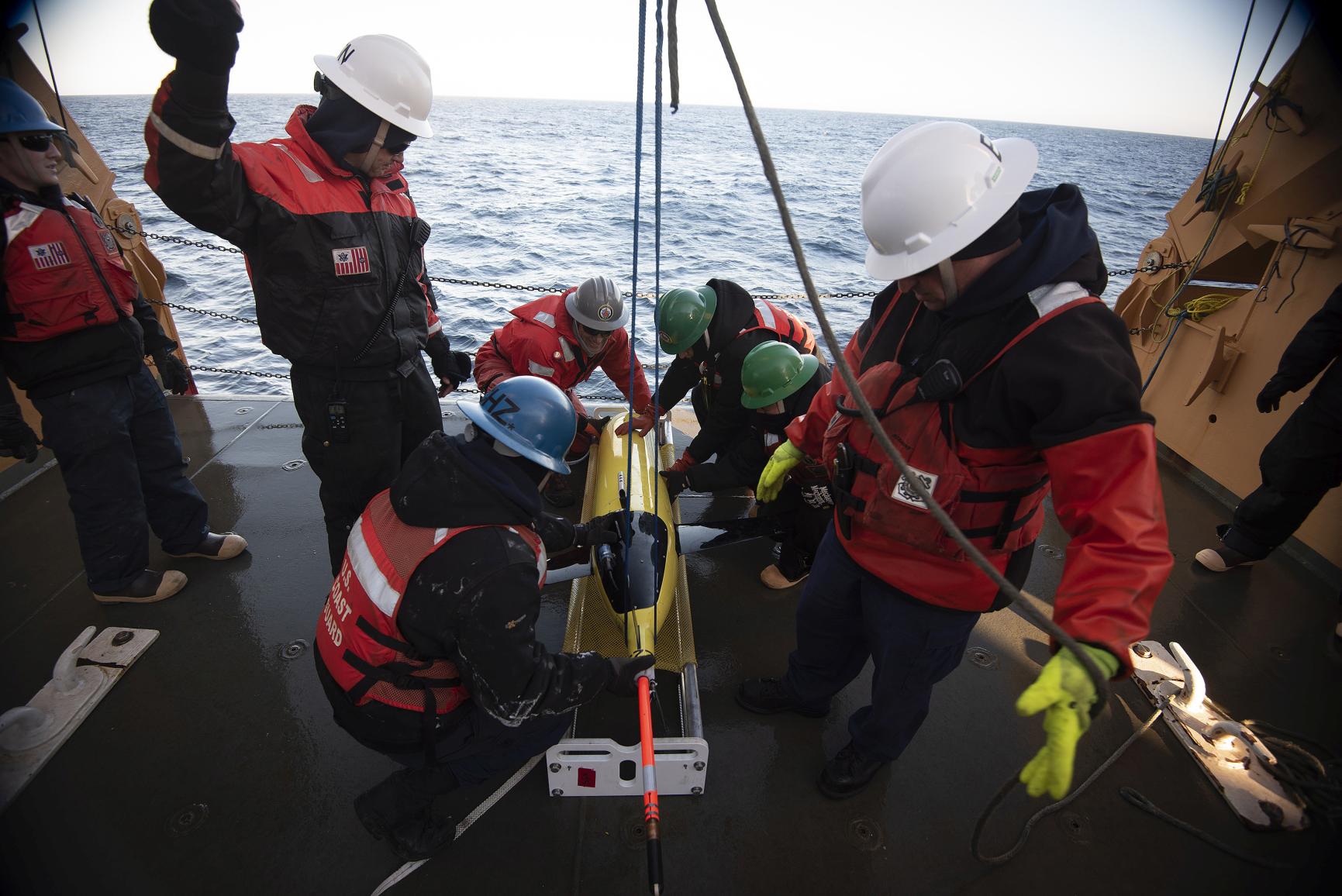 Preparing to deploy a sea glider in the Arctic. Scientists use gliders to collect oceanographic data and study the underwater world. (Image: David Wa / Alamy) 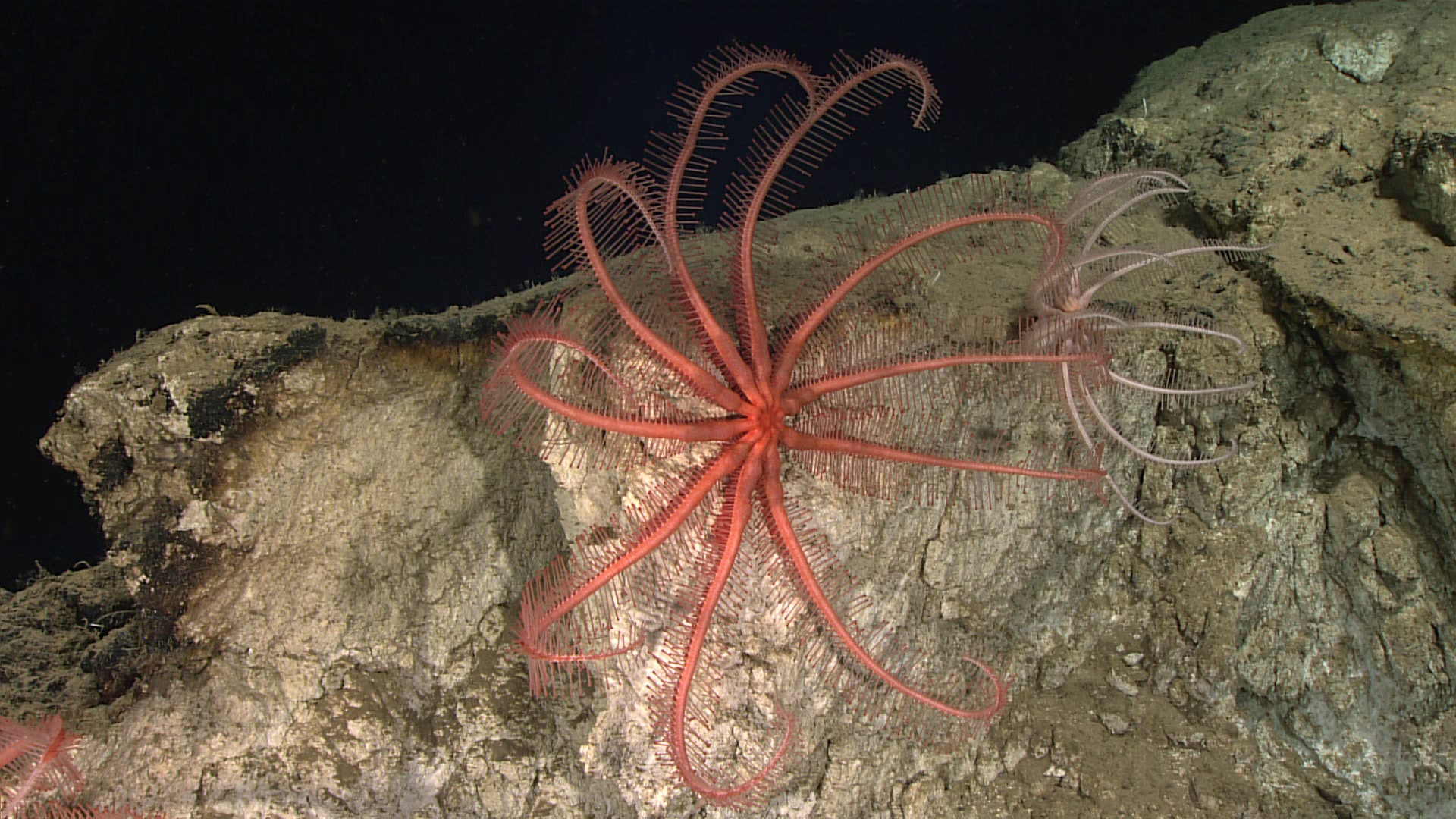 A Brisingid seastar on the side of the Mona Canyon off the coast of Puerto Rico (Image: NOAA/ Flickr, CC BY-SA 2.0)

As we currently know so little about our ocean, climate models have to rely on incomplete data. With a more detailed picture of the floor, scientists can gain more accurate answers to questions like: how does the ocean work as a climate regulator, how much harm are we doing to it, and how can we better protect it?