The world’s oceans are undergoing unprecedented change, and the damage will accelerate in the coming decades unless urgent action is taken on global warming, a major new report from the United Nations climate body has warned.

What is the IPCC?


The Intergovernmental Panel on Climate Change (IPCC) is a UN body founded in 1988 to assess climate change, based on the latest scientific evidence

The Special Report on the Ocean and Cryosphere in a Changing Climate is an update on the latest scientific research intended to advise policymakers. The report by the IPCC is the latest warning from experts that impacts of manmade global warming are already being felt and are set to get more severe. It focuses on two separate but connected systems – the world’s oceans and its massive stocks of ice (collectively called the cryosphere).

“The ocean and cryosphere might feel remote but they impact all of us … They are critical for all life on Earth,” said the IPCC chairman, Hoesung Lee, at the launch of the report in Monaco.

The global ocean is getting warmer, acidifying and losing oxygen, says a summary of the report, which draws on nearly 7,000 studies and 104 authors from 36 countries. Currents and ocean mixing are weakening, while sea levels, extreme waves and storms are on the rise. Sea life and ecosystems are being disrupted, with more frequent coral bleaching events and marine heatwaves.

“We are seeing enduring and unprecedented change,” says Debra Roberts, co-chair of the IPCC Working Group II. “This report shines a very strong scientific light onto two systems that have not necessarily been on the world stage when we’ve been talking about climate change.” 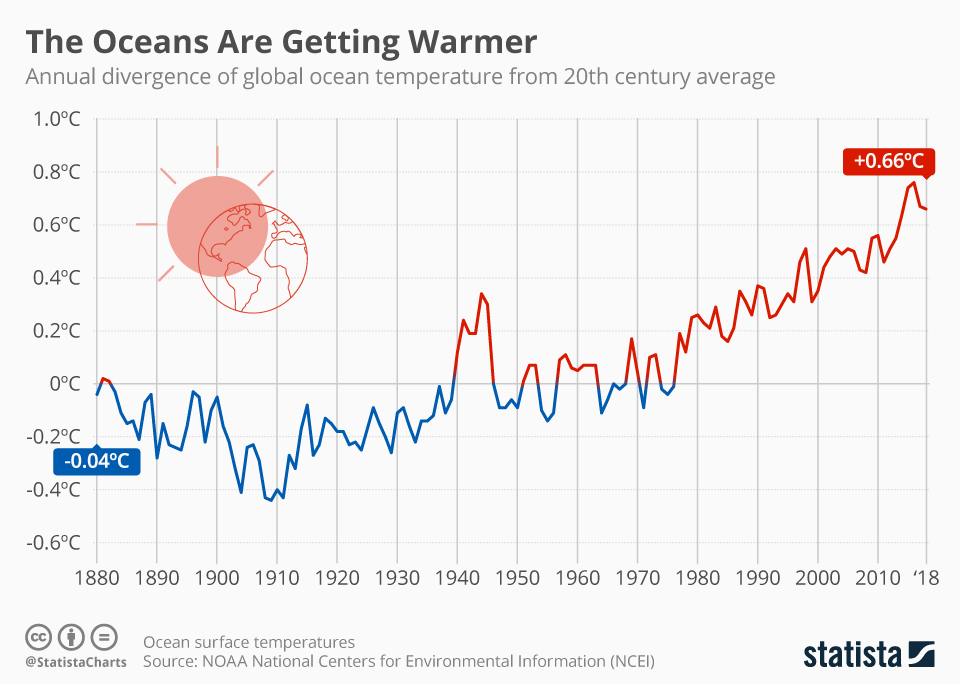 Most of the excess heat produced by global warming gets absorbed by the ocean. And since 1993, the rate of this ocean warming has doubled, the report summary says.

Together with increased amounts of fresh water pouring in from melting ice towards the poles, warming reduces the density of the seawater near the surface. This interferes with the natural mixing of the ocean, to produce a relatively static surface layer stuck on top of the deeper, denser water. This so-called stratification of the upper 200 metres of ocean has increased by 2.3% in the past 20-30 years. Such reduced mixing between the surface and deep ocean is a problem because it can reduce oxygen levels and disturb the circulation of carbon and nutrients.

It’s not just heat. Massive amounts of carbon dioxide are also absorbed by the oceans – about 20-30% of all human emissions since the 1980s have ended up there, the IPCC says. This is making seawater more acidic. Scientists say they can see this human fingerprint on pH across 95% of the ocean’s surface.

Sea level rise over the decade to 2015 is “unprecedented over the last century” and has reached 3.6mm a year, the summary says. That’s more than twice as fast as the rate at which seas rose during the 20th century. About 1.4mm of this each year is down to thermal expansion – the oceans swell as they get warmer. But the dominant contribution of 1.8mm a year is from melting glaciers and ice sheets.

Because they sit on land, these massive chunks of ice – from Greenland to Antarctica – directly raise seas as they break up. And this process is accelerating as temperatures rise. According to the report, mass loss from the Greenland ice sheet doubled in the two decades to 2016. 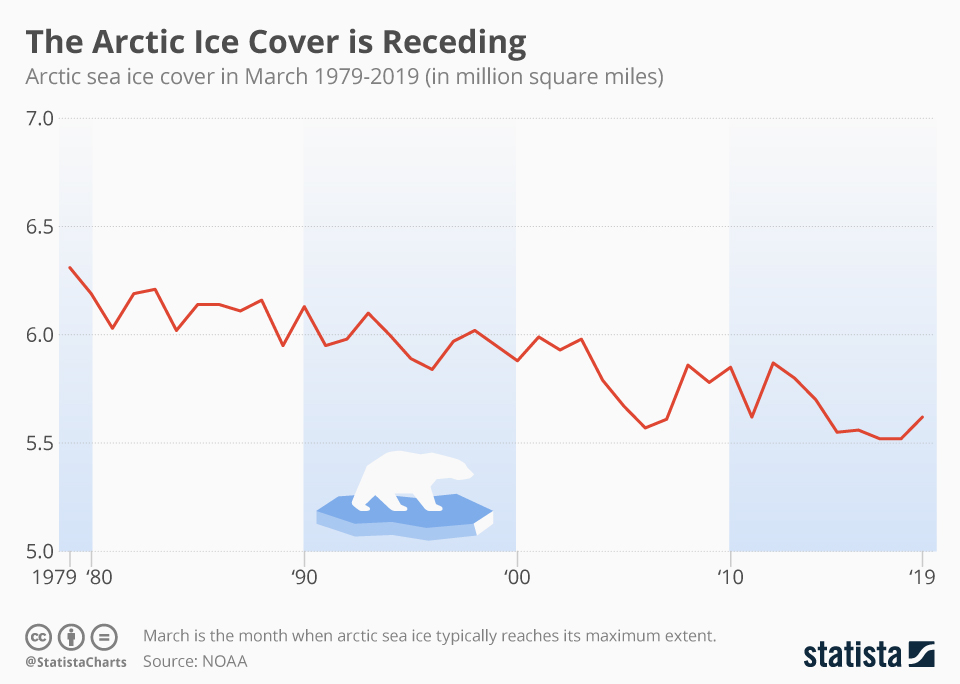 The situation in Antarctica is even more precarious. Mass loss in the Antarctic (melting ice in other words) tripled during that period, and the report says observed acceleration in ice flow and retreat could signal the Antarctic ice sheet has passed the point of no return and will now inevitably break up. Scientists don’t have enough measurements to be sure if that’s happening, but such a drastic change would “lead to sea-level rise of several metres within a few centuries” the IPCC says.

Clear warnings from the IPCC

Jonathan Bamber, director of the Bristol Glaciology Centre at the University of Bristol, said: “No one who has been paying attention needs another wake-up call about how bad things could get but, if they did, there is plenty to be concerned about for the future of humanity and social order from the headlines in this report.”

The special report is one of three produced by the IPCC on specially selected topics and published between the organisation’s regular full assessments, the next of which is due in 2021. A special report on the likely impacts of 1.5C warming was released last year, and another on the impacts of global warming on land-use was published last month.

The work of the IPCC is designed to feed into and support the international talks on a global climate treaty to address greenhouse gas emissions. The next of those annual meetings is scheduled for the Chilean capital city Santiago in December, where countries will continue to discuss how best to implement the Paris Agreement they signed in 2015.

One goal of that agreement is to limit global warming to 1.5C. Scientists say that will be difficult but the new IPCC report lays out the benefits of doing so, says Nerilie Abram, one of its authors and a climate scientist at the Australian National University.

“We see two very different futures ahead of us. On the one hand, if we are able to take action to dramatically reduce greenhouse gas emissions then we can limit how much these parts of the climate system will change,” she says. If we don’t: “Then we will see some very rapid changes in these systems that will make it very difficult for people and ecosystems to adapt.”

Responding to the report, professor Dan Laffoley of the IUCN (International Union for Conservation of Nature) world commission on protected areas, said: “We are an ocean world, run and regulated by a single ocean and we are pushing that life support system to its very limits through heating, deoxygenation and acidification. We are well past ‘wake up calls’ – what we need now is enlightened self-interest to deliver the actions that protect the ocean and climate and which in turn protect and support humanity.”

Andrew Norton, director of the International Institute for Environment and Development, said: “This report’s findings are staggering. The rate and magnitude of change to the ocean, glaciers and ice sheets are happening much faster than previously predicted. The climate emergency must be met with equally accelerated action.

“The science clearly shows the effects on the ocean will disproportionately hit tropical areas, which are home to the highest concentration of people living in poverty. Their lives and livelihoods – particularly small-scale fishers – are at risk from rising sea levels, ocean warming, acidification and plummeting catches of fish.

“In mountain areas, thawing permafrost and increased floods and fires will have increasingly devastating impacts on the poorest people and the longevity of the infrastructure that serves them.

“Rich countries must step up their response to tackling climate change. The countries most able and historically responsible urgently need to make bigger cuts in emissions, transfer appropriate technologies and provide the money they committed to help developing countries cope with the climate crisis.”

Taehyun Park, global climate political advisor with Greenpeace East Asia, said: “Climate action and building the resilience of our oceans need to go hand in hand and governments and industry know the solutions. They must take decisive steps to ditch fossil fuels and submit their national plans to stay below 1.5C by next year, when they will also need to deliver a strong Global Ocean Treaty capable of protecting at least 30% of the world’s oceans as marine sanctuaries.”

For more on the implications of the report for Asia, see Trapped between melting glaciers and a rising sea on thethirdpole.net