Jenna Jambeck has been studying marine debris for over 20 years. Four years ago the University of Georgia professor published groundbreaking research quantifying the extraordinary amount of plastic waste entering the global ocean each year.

Not content with research, she is also a co-developer of the mobile app Marine Debris Tracker, which has recorded the location of over 2 million pieces of litter collected by thousands of app users around the world.

When she met with China Dialogue during a recent visit to Beijing, she wore sunglasses with a frame made from discarded plastic fishing nets, and had a tote bag over a shoulder. She drunk from a reusable water bottle, and had old business cards with an outdated job title to hand.

When not being interviewed or teaching, Professor Jambeck can often be found digging through street trash, mobile app at the ready. She talked with China Dialogue about what China’s improvement in waste management means for both China and the world.

China Dialogue (CD): You co-developed the Marine Debris Tracker app. How does it work? 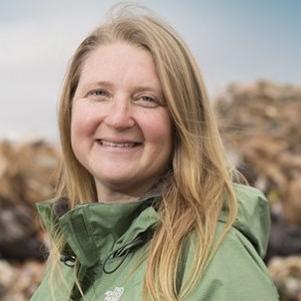 Jenna Jambeck (JJ): The app allows people to record the type and location of trash they have found. It has various categories for you to choose the type, and uses GPS to track where the trash is found.

We had a couple of missions in developing the app, including raising awareness and education. I’ve used it in my classes before. I had my students go out, use the app, collect litter, log it. Then they told me they saw litter that was “invisible” to them before using the app. That is awareness. After picking it up, you’ll start to think, I don’t need some of these items or I need to make sure I control the amount of trash that I produce. You try to figure out how the waste ended up on the ground. That is education. Also, the data we collect showing location and litter type can be used for research. Then we can have intervention strategies to prevent the place from getting littered.

CD: Beyond raising individual awareness, how can we reduce the amount of new plastic products being produced by businesses and encourage recycling, which is considered more expensive?

JJ: Recycling would not necessarily bring an economic loss to businesses and may even stimulate sales instead. One example is the US-based tech giant Hewlett-Packard (HP). They have launched an ocean-bound plastic programme, which is to recycle polyethylene terephthalate (PET) bottles for use in HP ink cartridges. Many consumers would like to buy these products made from recycled materials when they know their choices could help to save the ocean.

What is equally important is, whether it costs more or not, companies should take the initiative to recycle more. They have used the material and made a profit, but 100% of the managing burden goes to the community now. So why shouldn’t the company also play a role? However, we still need policies to force the companies to recycle. Otherwise, nothing will change.

CD: How should societies respond to the “convenience culture”, such as ordering food delivery online, which creates need for disposable packaging and utensils?

JJ: People can try to manage the system in different ways to not produce disposable things or at least use less plastics. There should be ways to use more reusable materials. If you’re getting frequent deliveries, maybe you can return tableware and boxes or maybe the store can take stuff back. If there is no reusable system and people are not recycling, it would be better if the store used paper than plastic.

CD: Critics of reusable products such as paperwares and cloth totes argue that they may have a worse impact on the environment through their lifecycles. What’s your response?

JJ: When lifecycle analyses say these products are worse, maybe they are calculating the water they use or carbon footprint they create. But what is often not taken into account in those studies is, for example, if plastic bags end up killing sea turtles in the ocean. But certainly it would be bad if we all created a bunch of totes that we don’t use.

CD: What do you think of China’s role in reducing waste in the past few years?

JJ: China has done a lot of things in this area. The country is being very progressive, trying to move closer to a circular economy and becoming one of the leaders in that space.

China is able to use technologies including mobile phones and social media to help with waste collection. And the infrastructure is rapidly expanding, like the number of waste-treatment facilities in the country. The government is improving the waste-management system to meet the needs of the large population.

CD: The country enforced a very controversial import ban on plastic waste in 2017. From your perspective, what’s the impact?

JJ: In the past, we didn’t have markets for all the trash and China needed materials, so we exported to China, which was economical and beneficial for both parties. However, in that practice, all the materials that can’t be recycled – we call it “contamination” – also came over to China. That aspect plus the fact that China is interested in growing its own domestic recycling system prompted China to implement the ban.

For exporting countries, the ban makes us examine our system – we should think of the upstream design of our products. Like how much we’re producing, how we design our packaging, and why it is so hard to recycle? Economically we’ve had a hard time keeping recycling going because this route was cut off. But people started to take more community responsibility and commit to figuring out ways to recycle better than before. The ban also pushes us to manage the trash with good standardisation. Some developing countries still need and want materials. If the trash meets standards, they would still like to receive it.

CD: Any advice for China to improve waste-management going forward?

JJ: What worked well in the US was implementing regulations for solid-waste management. The federal government sets those regulations and then helps with improving infrastructure by giving money to individual states. With the money, landfills and waste-treatment facilities have been better designed to be compliant with regulations.

On the public level, we need to know that individual choices matter. It could be a very small individual choice, but if it is shared by a billion people then it would make a huge change. There’s a lot of power in the people.