It is the first autumn since the Tiaozini wetlands became a world heritage site. The artemisia halodendron, a hardy shrub cultivated for food on these briny mudflats, has changed colour, carpeting the brown in seasonal red.

The flats are host to millions of migratory birds that winter here, including the critically endangered spoon-billed sandpiper.

Despite Tiaozini’s importance as a habitat, it was only included in the bid for world heritage site status at the last minute. Its inclusion should be considered “the biggest achievement of this application”, according to Wang Songlin, secretary-general of the Qingdao Ocean Research Association. Just a few years ago, the area was under threat from land-reclamation projects.

How did Tiaozini escape this fate and win international recognition? And what can efforts to save other sites in urgent need of protection learn from it?

An essential stopover for migratory birds

The Tiaozini wetlands lie halfway along the East Asia–Australasia Flyway, a route taken by 50 million migratory birds of 200 species every year. Twenty-five of these are known to be endangered, of which 23 use the wetlands to overwinter, as their summer breeding grounds, or simply as a place of rest on their migrations. The spoon-billed sandpiper is one of these visitors. There are thought to be fewer than 500 mature individuals of this rare wader left. Up to 100 of them gather in Tiaozini to spend the winter.

The sandpiper’s numbers have seen significant declines since the 1970s. According to Li Jing of the NGO Spoon-billed Sandpipers in China, a major cause of this has been development on its habitats. Reclamation of Jiangsu’s wetlands has also threatened populations of 16 other migratory bird species that rely on intertidal habitats, she says. 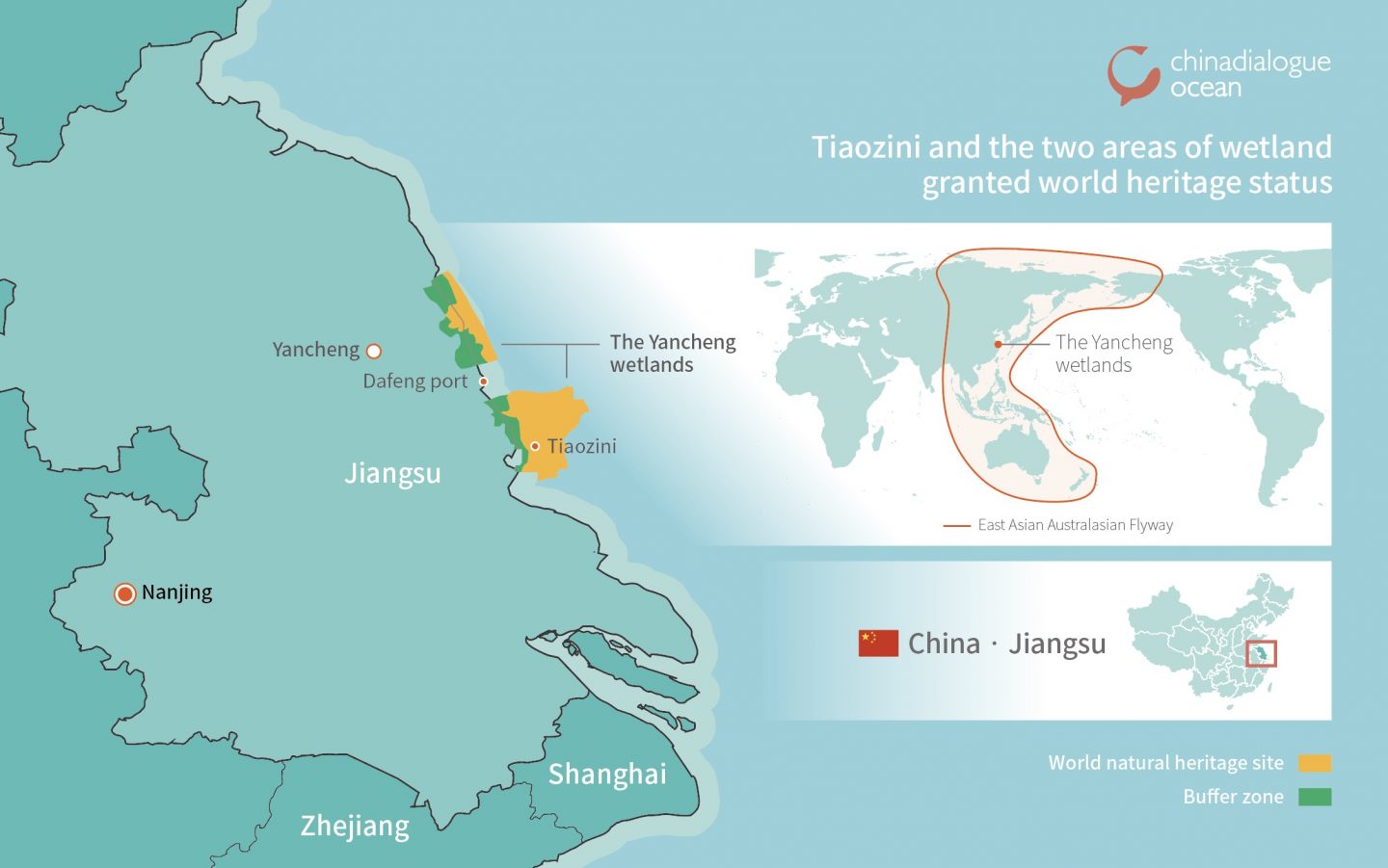 Tiaozini is part of the Yancheng wetlands that UNESCO granted world heritage status in July, and is one of the few remaining refuges for these birds in China. The wetlands include the wider circle of intertidal mudflats surrounding Tiaozini and a separate area to the north of the port of Dafeng. They take in five existing reserves, including two protected at the national level: the Yancheng rare birds reserve and the Dafeng Milu nature reserve. Together, the Yancheng wetlands make up the first phase of China’s application to the World Heritage Committee to protect migratory bird sanctuaries along the coast of the Yellow Sea and Bohai Gulf. Phase two is set to be submitted in 2022.

The threat of land reclamation

Despite being part of the Yancheng rare birds reserve, Tiaozini was included in a plan to reclaim wetlands put forward in 2011 by the Yancheng municipal government.

Despite a lack of research on the link between bird populations and their stopover habitats, Li Jing warns: “Shrinking their habitats can have a devastating effect on migratory birds. Half the wetland may not have been enough to support them.”

Thankfully, the second phase of development was not approved.

Wang Songlin thinks the approval process for this second phase was slowed by interventions from Li Jing’s NGO and fellow organisations like Let Birds Fly. These groups maintained a dialogue with both the local development and reform commission, which submitted the land-reclamation plans, and the State Oceanic Administration, responsible for approval or rejection.

Tian Yang, a former project officer with Let Birds Fly who took part in that organisation’s investigation into the plans, says he was part of a broad effort to stop the development. “It was the result of work by academics, NGOs, members of the public and of the country’s legislative and political advisory bodies. In particular, it was the result of solid scientific research, legislative proposals and the world heritage application,” he said.

But there is general agreement it was broader circumstances that halted the plans – a shift in the winds in favour of environmental protection.

In October 2012, the State Council issued a document on setting marine ecological “red lines”. It called for the protection of 30% of the natural coastline of the Bohai Sea and for strict management of the region in accordance with its ecological value and vulnerabilities. In late 2016, as part of the implementation of these red lines, the State Council published a plan to protect and restore over 533,000km2 of wetlands across the country.

“These changes meant previously planned land-reclamation projects would not be able to go ahead in the near term,” explains Wen Cheng, a member of both the International Union for Conservation of Nature’s (IUCN) Species Survival Commission and the National Forestry and Grassland Administration’s World Heritage Committee.

And so, the “near term” became more permanent for Tiaozini.

It was against this backdrop of national efforts to bolster the protection of coastal ecosystems that the application for world heritage status for Jiangsu’s wetlands was put together. Its success was far from assured, however. It initially failed on two of UNESCO’s three main assessment criteria, including existing environmental protection measures. Suggestions the application be delayed promoted China’s delegation to the World Heritage Committee to declare “a national commitment to the all-round protection of important coastal migratory bird habitats”, recalls Wen Cheng. He says this commitment, along with China’s clear acknowledgment of the importance of Jiangsu’s wetlands, meant the application ultimately passed by 18 votes to two.

As for Tiaozini’s last-minute inclusion in the application, this was requested by the IUCN expert committee responsible for assessing the bid, which called it critically important for bird conservation.

Wen Cheng says this had a lot to do with contributions from scientists and volunteers working in Tiaozini, whose transparent and objective research provided the evidence needed to prove the site’s importance.

World heritage status is not the end for Tiaozini and the Yancheng wetlands. Keen to further increase protections, the Yancheng municipal government is currently applying for “International Wetland City” status. It has also just hosted the Third Yellow and Bohai Seas Wetlands International Conference, and will seek new ways of developing that will protect the wetlands instead of reclaiming them for farms or construction.

The two sites protected under this first phase application to the World Heritage Committee is just the start. The second phase will include an additional 14 locations, most of them further north along the coast of the Bohai Sea and the Liaodong peninsula. Together with the wetlands of Jiangsu, they make up a vital network of habitats for migratory birds travelling along the East Asia–Australasia Flyway. China hopes coordinating conservation efforts across all these sites will be the most effective way of protecting them.

“Applying for world heritage status is a new way of encouraging local governments to protect their wetlands,” says Wang Songlin. China now has 14 natural world heritage sites, including the Jiangsu wetlands. In many cases, the ecological value or geological characteristics of these sites becomes a calling card for the local area. And with the Chinese government’s focus on environmental protection, a successful bid is also a feather in the cap of any ambitious official.

Much work remains to be done for phase two of China’s application to protect migratory bird habitats. Chen Yaohua, director of the World Heritage Research Centre at Peking University, has outlined the many steps involved in an interview with state media. He said the plan is to complete the application, as well as conservation and management plans for the 14 proposed sites, by June 2021. In September 2021, it will be sent to the World Heritage Research Centre for an assessment, and then it will be officially submitted by 31 January 2022, for inclusion in 2023.

“So, preparations for the application need to start next year. Time is very tight. There’s barely time to take a breath,” he said.