“The Bible says that God created the world by dividing the land from the water. If so, He forgot about wetlands.”

The word “wetlands” might bring to mind godforsaken swamps only really fit for birds, who move on when the season allows. In reality, a wetland – ground permanently or periodically inundated by water – can be a great variety of rich ecosystems, from sandy beaches and coral reefs, to freshwater springs and alpine meadows.

Some astonishing early civilisations – in Mesopotamia, Egypt, Angkor – grew by and out of fertile wetlands. As well as abundant food, they can buffer river floods and tidal surges. And they are far deeper carbon sinks than their watery surfaces suggest: coastal ecosystems typically sequester CO2 several times faster than the net rate of mature tropical forests. 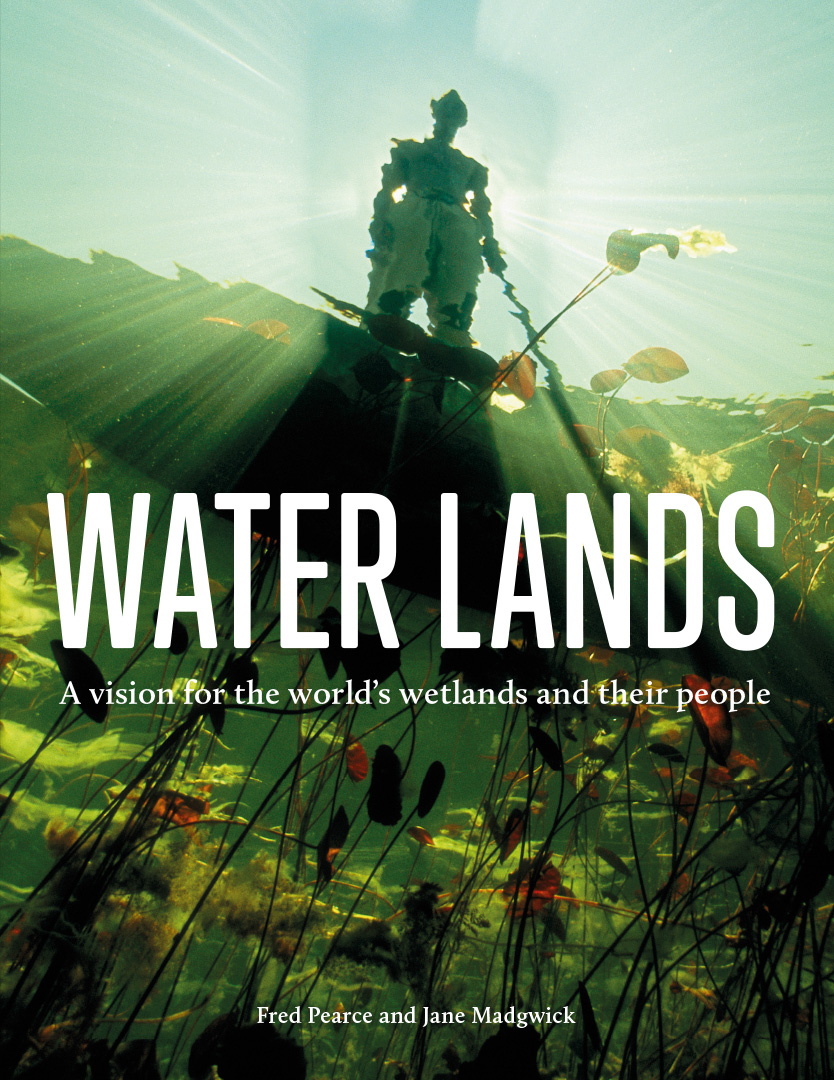 Water Lands, a new book out today by Fred Pearce and Wetlands International CEO Jane Madgwick, is a superb introduction to the history and possible future of 27 of the world’s most remarkable wetlands – soggy, liminal places where water and land are never fully one thing or the other.

The book records an array of management mistakes; many wetlands have been pumped, dammed or drained out of existence. We learn that although Donald Trump liked to call the federal government a “swamp” in need of draining, it was actually the driving force behind the US losing more than half its wetlands between 1780 and 1980. This included the destruction of the Mississippi floodplain, prompting ever higher levees to be built, which in turn intensify flooding.

Excessive development and pollution since the 1950s have taken a heavy toll on China’s wetlands too, with three quarters of its mangrove swamps lost.

Water Lands offers hopeful examples of people living in productive harmony with wetlands, and explores a recent surge in restoration projects. One exciting case is the Ruoergai grassland on the edge of the Tibetan plateau, where a “great rewetting” is boosting birdlife and the crucial rivers that flow from it.

Below we’ve featured a selection of images from the book, published by HarperCollins to mark World Wetlands Day. 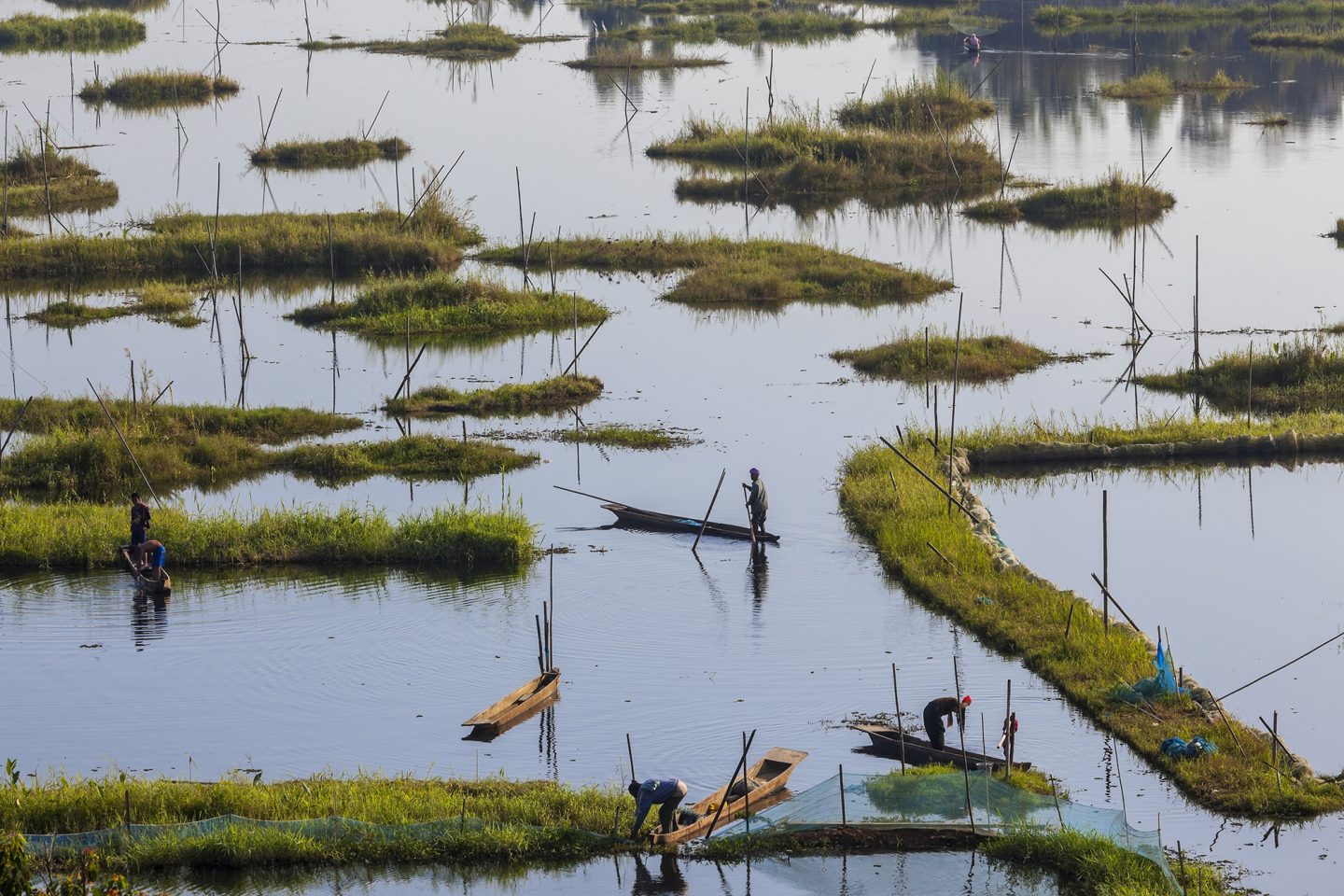 Thousands of fishers once spent much of the year camped on India’s Lake Loktak, harvesting its produce using traditional techniques. But the lake’s ecological balance has been lost due to an upstream dam, and the government has now banned people from living there. (Image © Peter Adams/Getty Images) 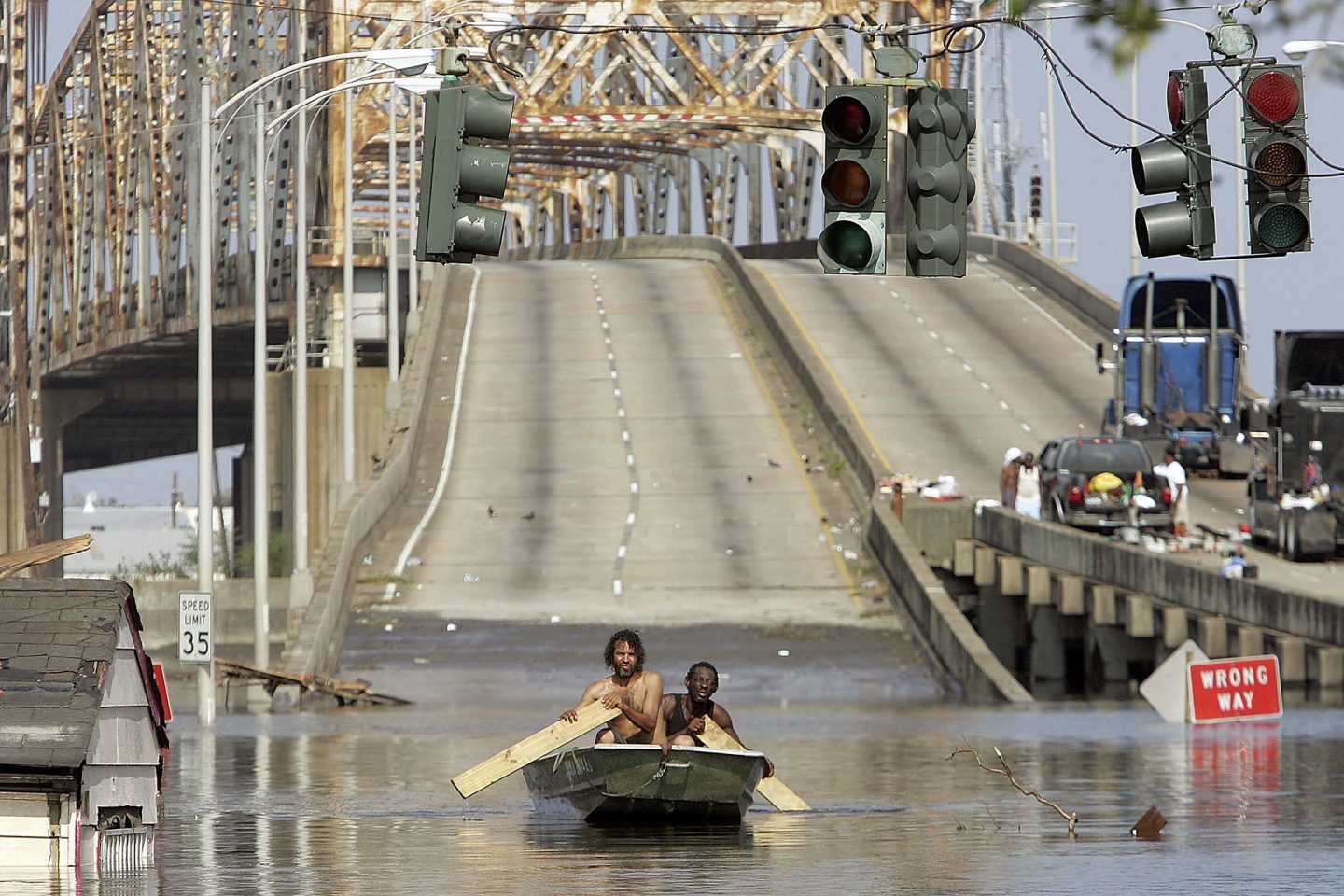 Two men paddle through New Orleans after Hurricane Katrina in 2005. The flooding was made much more severe by the destruction of the wetlands of the Mississippi river delta, that would otherwise have absorbed much of the seawater that surged into the city. (Image © Mario Tama/Getty Images) 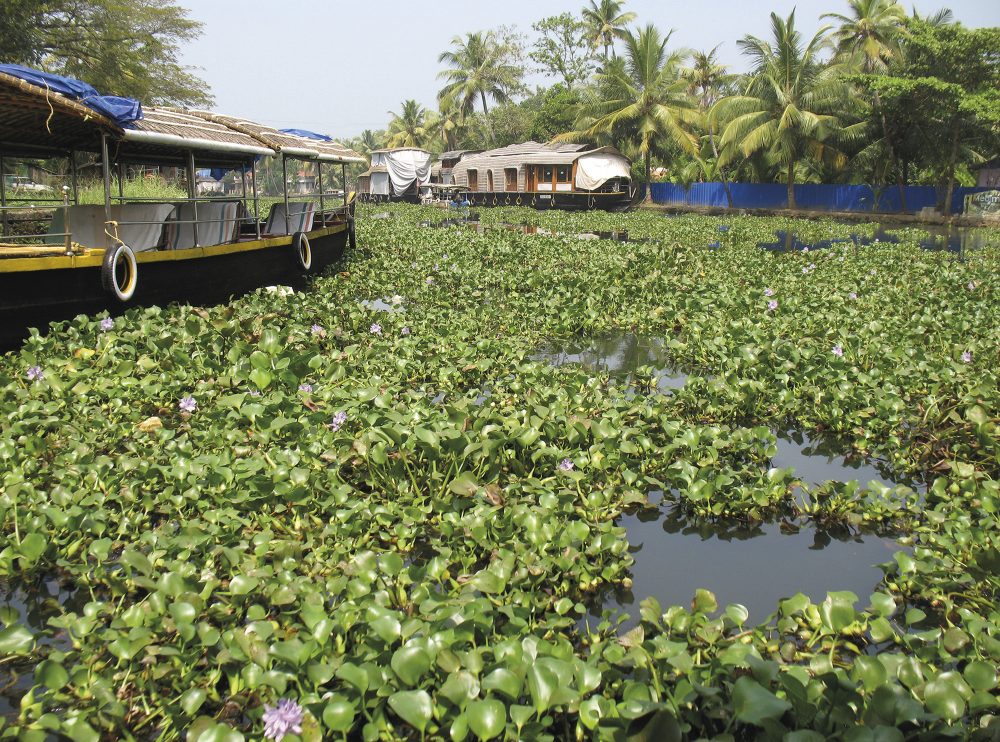 The picturesque backwaters of Kerala, southern India, have become clogged with invasive water hyacinth from South America. This has followed the draining of marshes that also raise the risk of floods during heavy monsoon rains, as happened in 2018. (Image © Fred Pearce/Wetlands International) 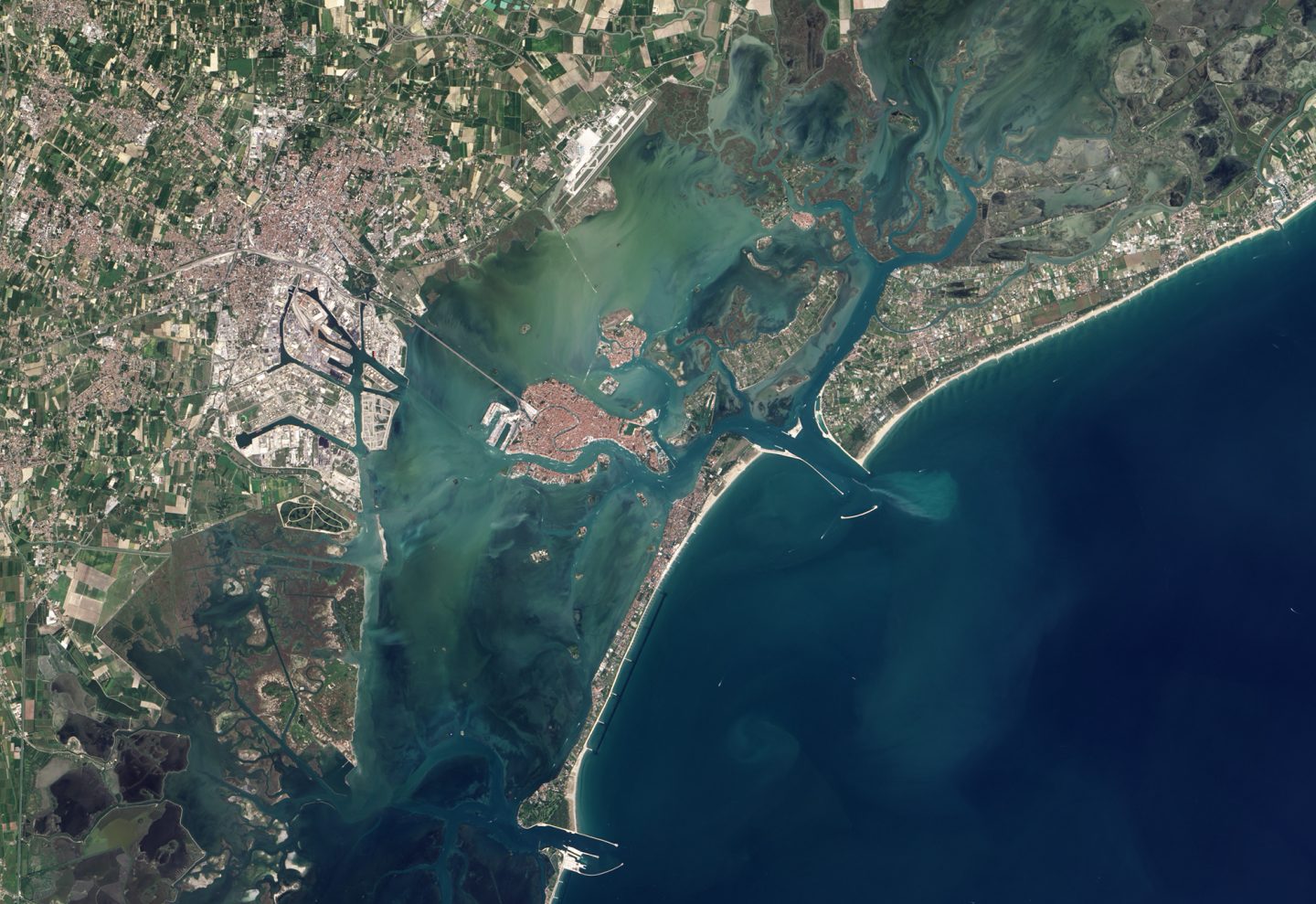 A Landsat satellite image of the Venice lagoon taken in 2013. Rising tides, dredging, land reclamation and the diversion of rivers have turned the sleepy lagoon into an ocean bay, putting the “floating city” in danger of being engulfed. (Image: NASA) 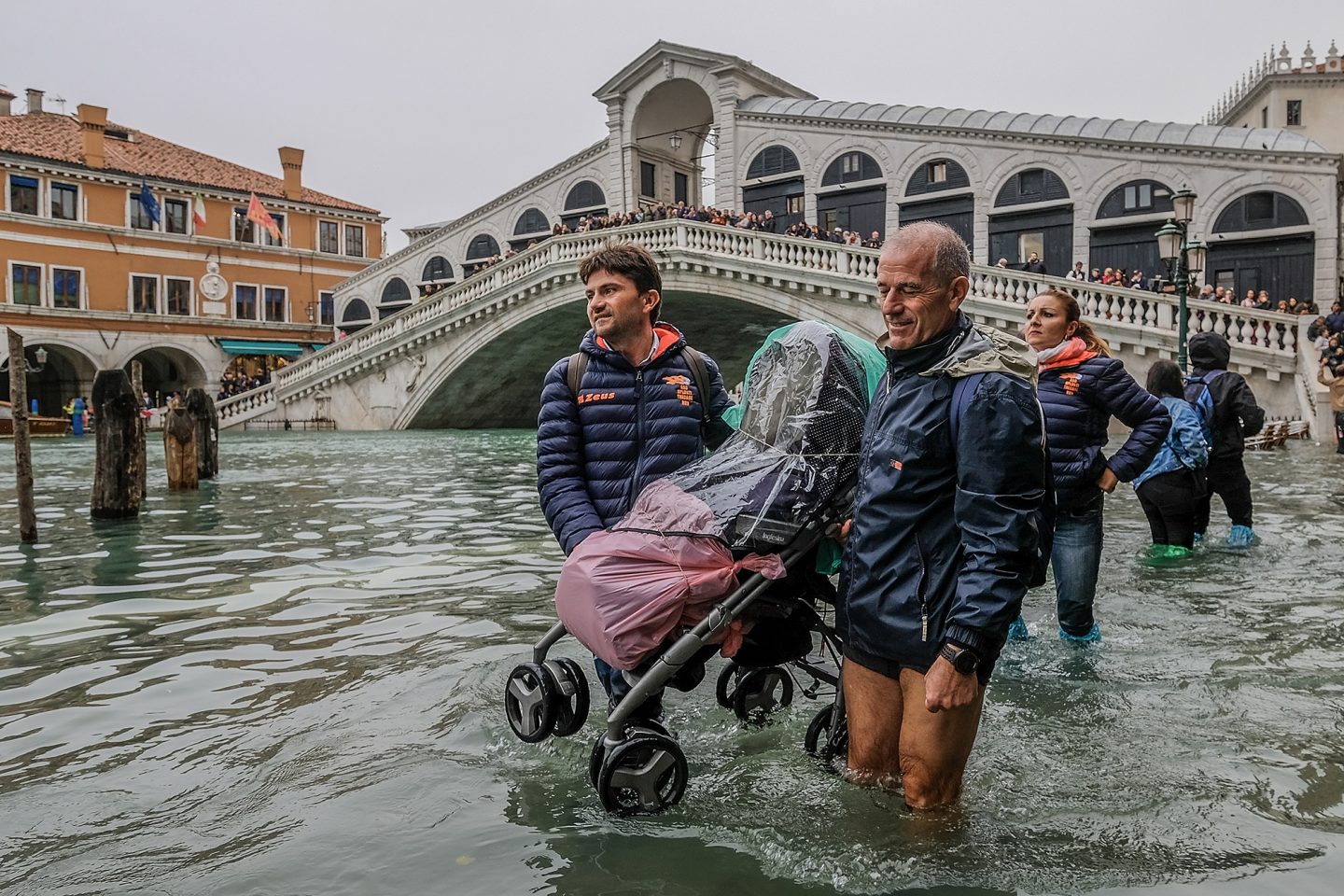 Tourists and residents regularly have to escape flooding across the low-lying parts of Venice. In the floods of 2019, over 85% of the city was inundated and two people died. (Image © Stefano Mazzola/Awakening/Getty Images) 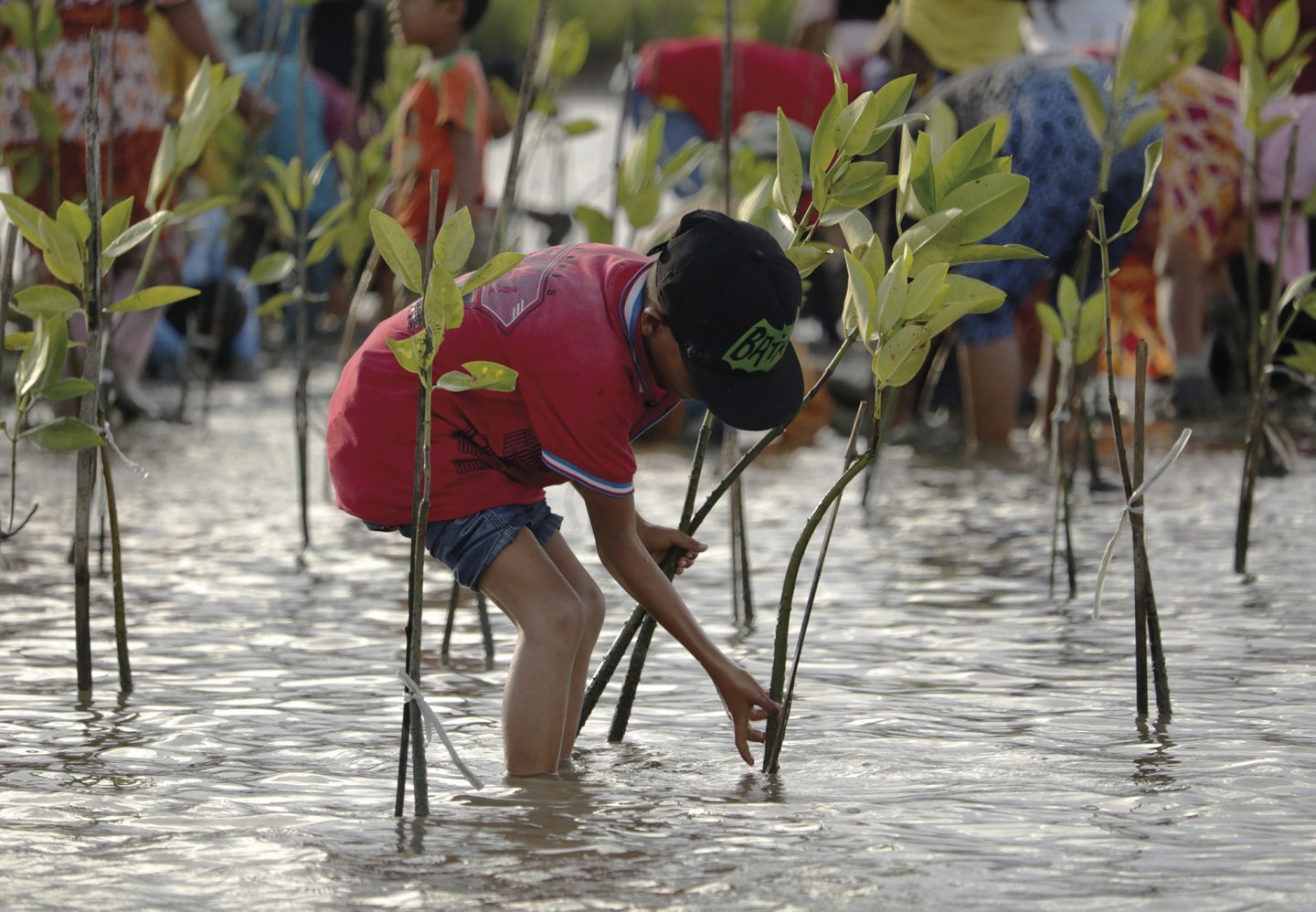 The 2004 Boxing Day tsunami in the Indian Ocean blasted the shore of the Indonesian province of Aceh. The damage and loss of life was made worse by the removal of coastal mangroves to make room for fish ponds. Here, the people of Aceh’s Alue Naga village plant mangrove seedlings to buffer future floods and revive local fisheries. (Image © Abdul Hadi Firsawan/Pacific Press/Alamy) 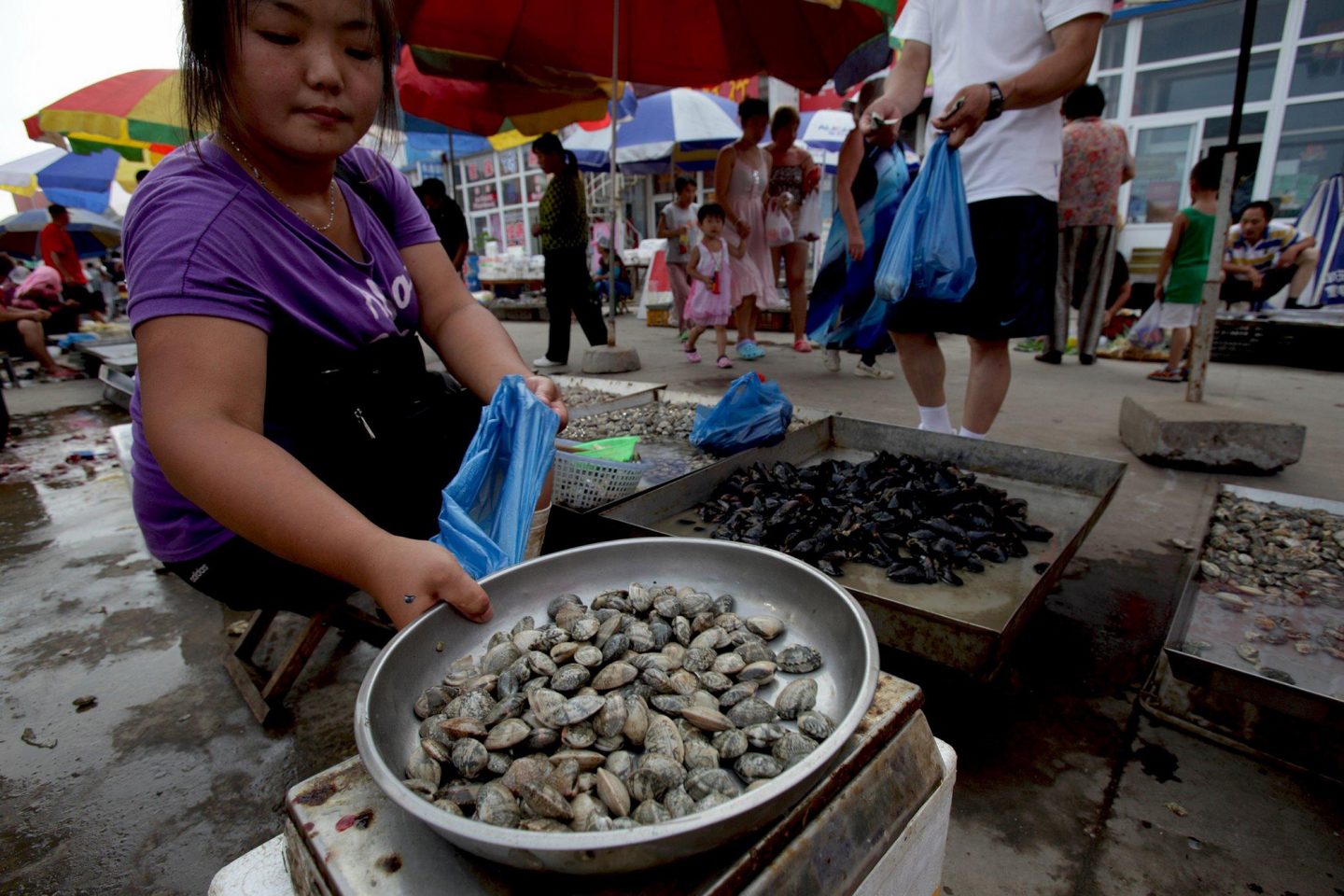 Seafood for sale at a market in the Chinese city of Dalian on the shores of the Bohai Sea. Much of the mudflats along the Bohai coast have been reclaimed for industrial and agricultural purposes, and the 2010 Dalian oil spill severely damaged the ecosystem. (Image © Arthur J D/Greenpeace) 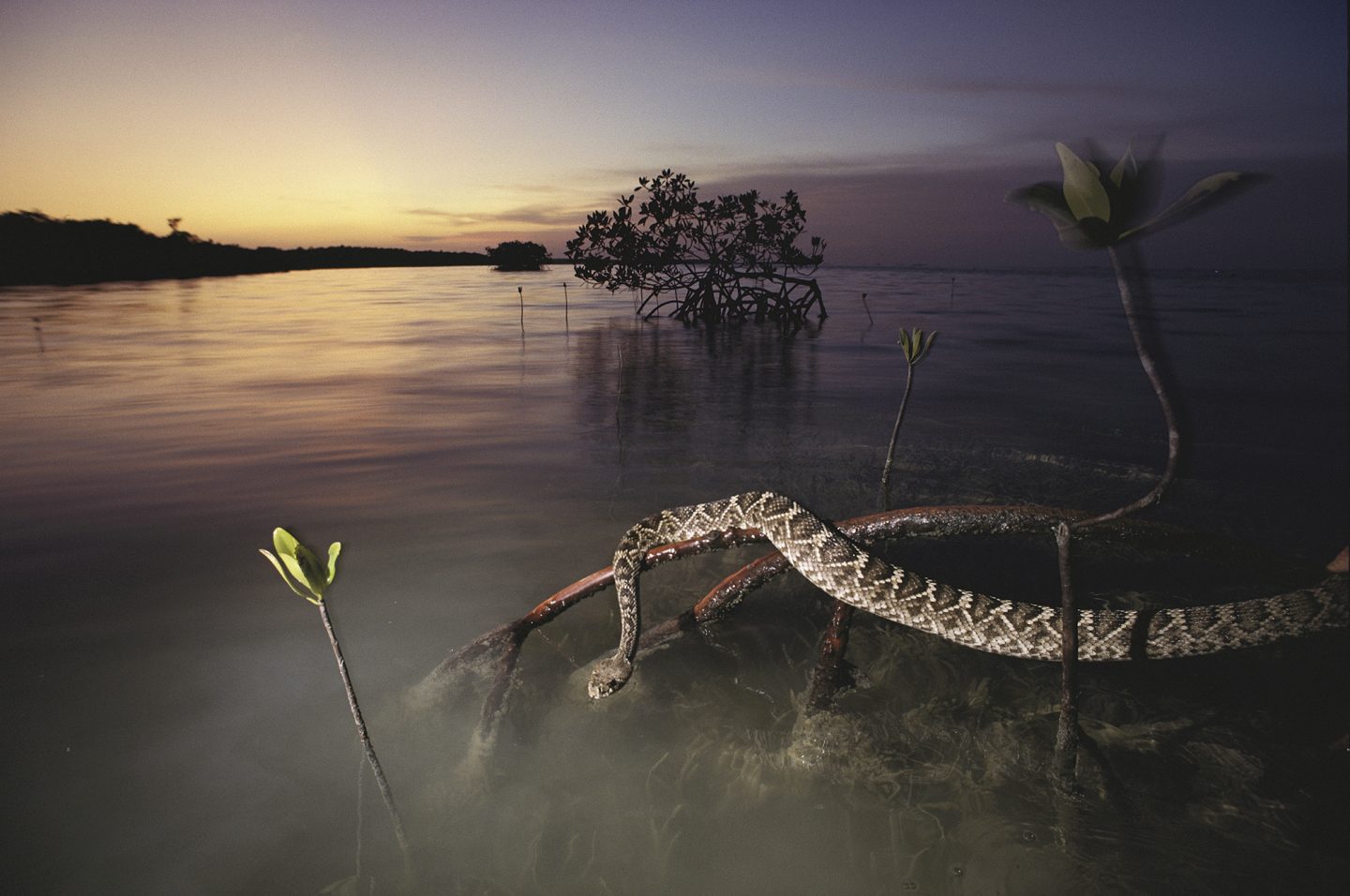 When given the chance wildlife still thrives in the Everglades wetland, which includes the largest freshwater marsh in the US. This eastern diamondback rattlesnake is endemic to the region. By the year 2000, the Everglades had been reduced to less than half its former size. Billions have since been spent on restoration efforts. (Image © Chris Johns/NG Image Collection) 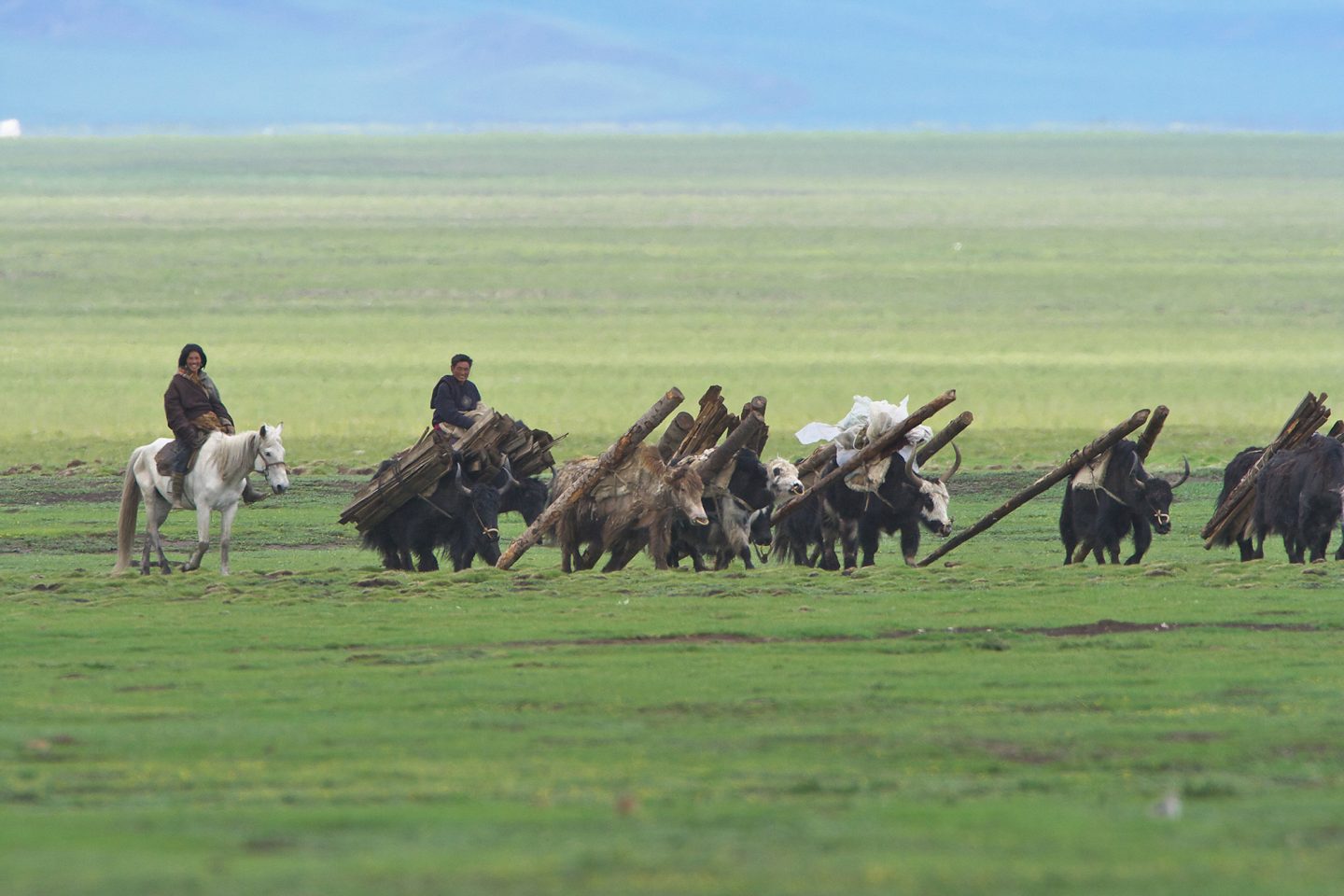 The boggy Ruoergai grassland in Sichuan province on the Tibetan plateau was drained in the Mao era. Those drains are now being blocked, with promising results for biodiversity and the flow of China’s two most important rivers. Both the Yangtze and Yellow rivers are fed by the grassland; in the dry season, 45% of the water in the upper reaches of the Yellow river comes from the grassland’s peat. (Image © Dong Lei/naturepl.com) 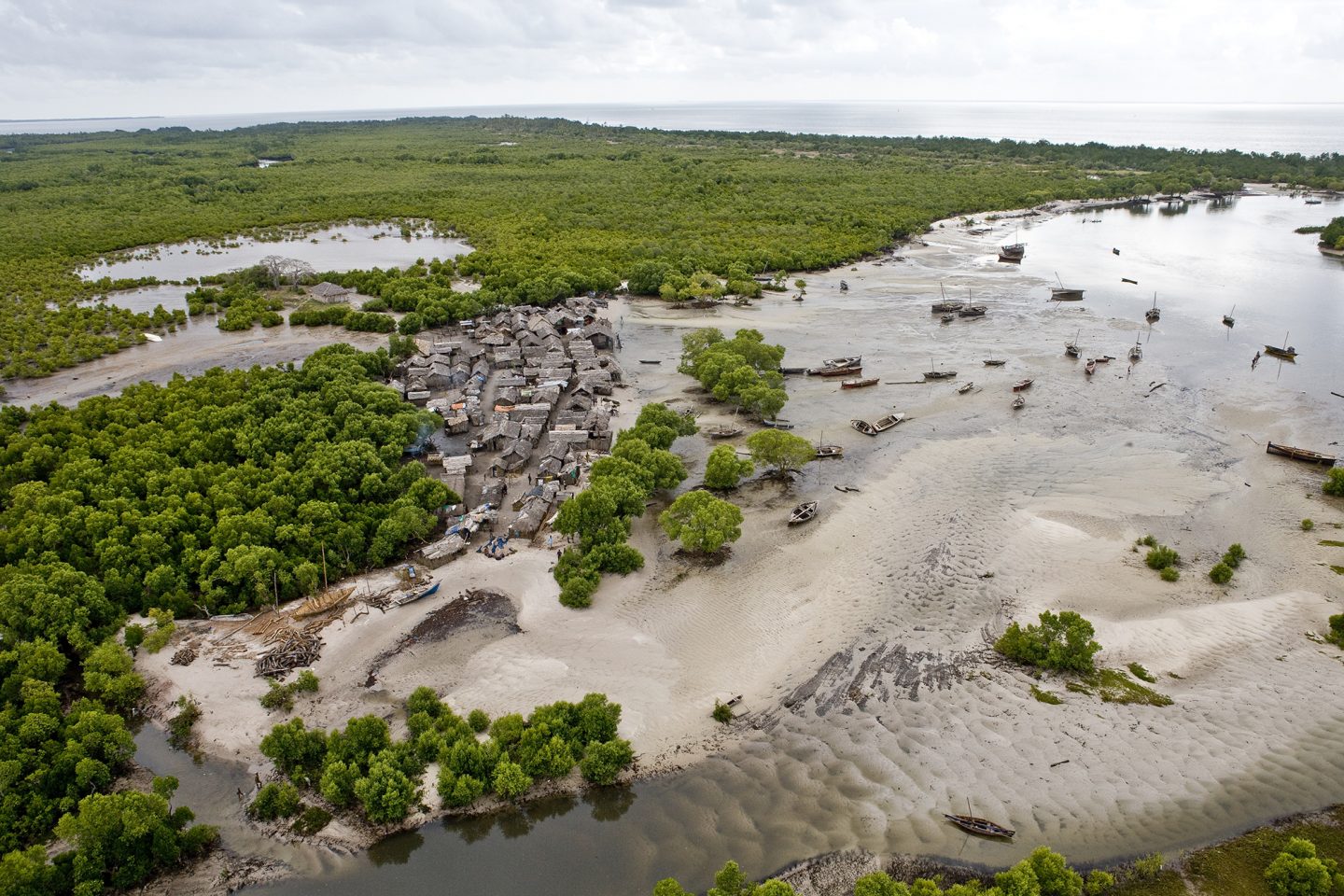 The Rufiji, running through Tanzania, is Africa’s sixth largest river. Its varying flows and constant supply of silt maintain the mangrove swamps of its delta, on the shore of the Indian ocean. But a dam under construction upstream threatens to disrupt the delicate hydrology and undermine the delta’s fertility. (Image © Michael Poliza/NG Image Collection) 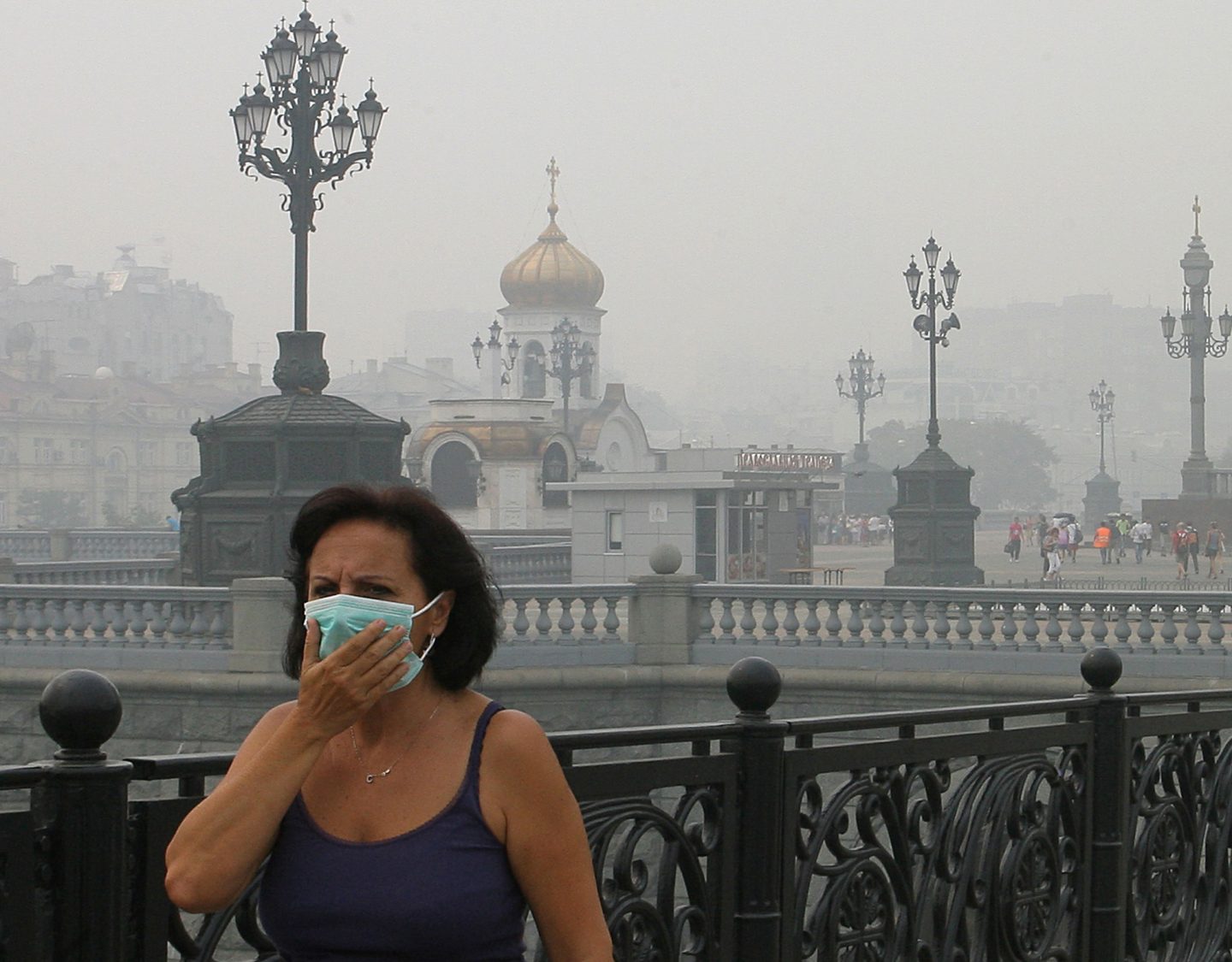 Vast swathes of Russia’s peat bogs were drained and excavated in the Soviet era to feed power stations. Abandoned after the collapse of Communism, the dry peat was particularly vulnerable to wildfires. In 2010, a record heatwave sparked peat fires across the country. Moscow experienced dangerous levels of air pollution. Now, rewetting programmes, such as those in Meschera national park near the capital, are taking off. Meschera has become a jewel of biodiversity, with pine and birch trees on the higher ground, and oak, willow and black alder in the boggier places. (Image © Alexandra Mudrats/ITAR-TASS/Alamy) 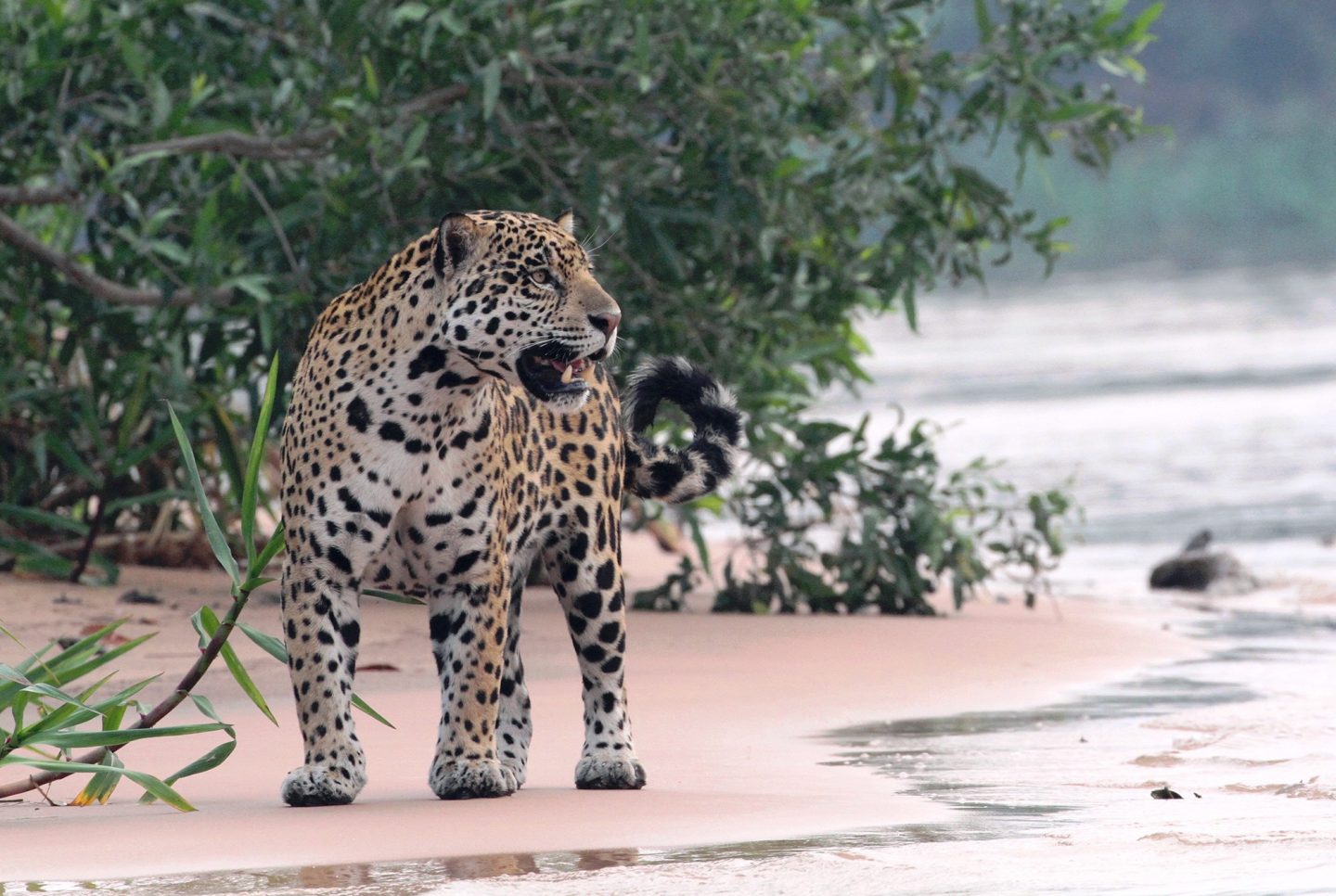 The world’s largest tropical wetland, the Pantanal, is a home to the most water-loving big cat, the jaguar. Straddling Brazil, Paraguay and Bolivia, this vast and remote land of muddy water flows, lakes and seasonally flooded grasslands, is interspersed with forest islands and salt pans. (Image © Rafael Hoogesteijn/Panthera Brasil)

The natural solutions to climate change held in the ocean

How AI is identifying illegal trawlers in Africa