The Palau National Marine Sanctuary (PNMS) has been hailed by the UN Ocean Conference as “one of the world’s most ambitious ocean conservation initiatives”. Fully operational since 1 January 2020, the sanctuary is designed to protect both Palau’s inshore fish stocks, and the global tuna population.

Before its existence, local people fished mainly near the coast, while foreign fishing vessels were offshore, catching mostly yellowfin, skipjack and bigeye tuna for export.

With the sanctuary in place, all fishing and mining in 80% of Palau’s exclusive economic zone – roughly 500,000 square kilometres, slightly larger than the US state of California – has been banned. The remaining 20% of Palau’s waters has been set aside as a “domestic fishing zone”, where artisanal and some commercial fishing is allowed, to supply Palau’s domestic market. 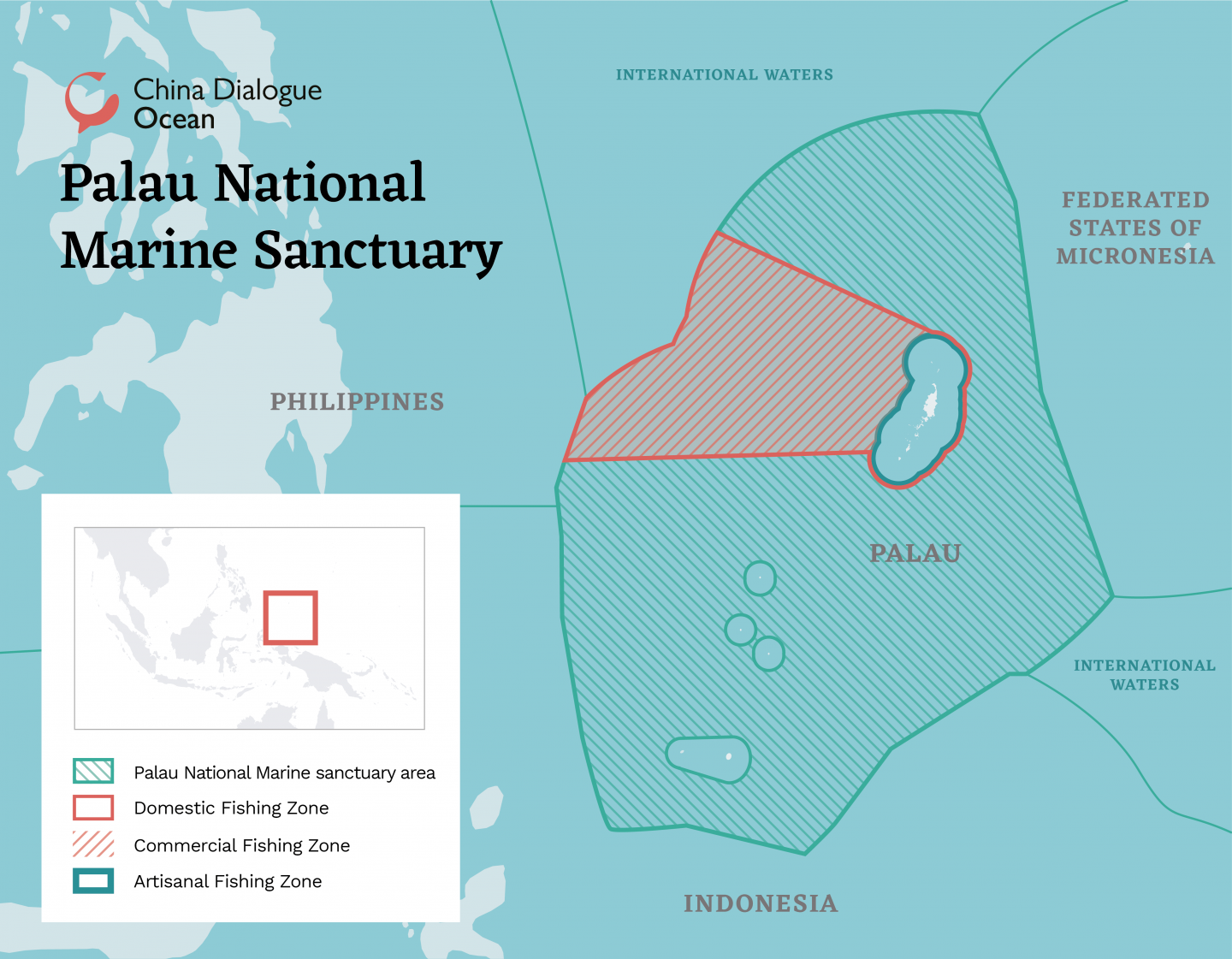 But banning large-scale tuna-fishing fleets from China, Taiwan and Japan has had an unwelcome side effect: a lack of tuna in local markets.

Local fishermen have therefore been taking greater quantities of reef fish – grouper, snapper and parrotfish – the very fish the sanctuary was designed to protect.

Designating 80% of its waters a no-take zone was a big call for an island nation with a population of 18,000. It was a “monumental resource to put under conservation,” according to Ann Singeo, executive director of local NGO the Ebiil Society, who was involved in lobbying for the sanctuary and working with Palau fishermen to define its aims. The sanctuary was supposed to enable local fishermen to catch more tuna.

Palau’s economy relies heavily on tourism, with around 20% of its workforce employed in the sector. Better marine conservation fits with the country’s goal of developing higher-end tourism. As part of efforts to upgrade its tourism and thereby ease infrastructure pressures, Palau reduced the number of charter flights entering the country in 2016. Though there were signs of an uptick in early 2020, before the Covid-19 pandemic struck, Palau’s tourism revenue has never reached its pre-2016 levels.

Meanwhile, Palau has failed to enhance the capacity of its domestic fishing industry to catch tuna in deeper waters. This has put the sanctuary’s goal of boosting food security at cross-purposes with its other goals of conserving fish populations and coral reefs and building eco-tourism.

The sanctuary’s shortcomings are in the political spotlight because of a presidential election due to take place in November.

President Remengesau Jr will be stepping down having reached his two-term limit. He has been busy defending his signature policy, which became fully operational in January after a five-year planning and implementation period, against criticism from potential successors.

Remengesau has acknowledged that the sanctuary has triggered some “unintended consequences”. He told China Dialogue: “Relieving fishing pressures on the reefs is indeed one of the goals of the sanctuary, but it is not one that we’ll achieve overnight. Ensuring local access to pelagic fish [such as tuna] is something that we are taking very seriously. We have a long-term situation where our pelagic fishery has been dominated by a foreign-owned, foreign-operated fleet, and that also weakens our food security.”

For the fishermen’s lobby, the appeal of the sanctuary rested heavily on promises to reverse the power balance between local fishers and foreign industrial fishing fleets. As Singeo explained: “The fishermen really wanted this bill passed because they wanted to regain the fishery that belongs to the Palauan people.”

In addition to having bigger boats to catch tuna in deeper water, the foreign commercial fleets also competed with Palau fishermen in the domestic market by selling their bycatch to hotels and restaurants.

Research by the Coral Reef Research Foundation in 2017 demonstrated the conservation need for the sanctuary. For some species, there had been a “critical drop in spawning potential that now places these species on the brink where populations will not be able to replenish themselves given current levels of fishing pressure,” according to Dr Steven Linfield, who led the work.

As a result of fishing pressure, throughout Palau’s archipelago fishers have seen a steady reduction in near-shore fish populations, catch sizes and average fish size, and there is an urgent need for increased fisheries management, said Linfield.

Before the sanctuary entered into force, an estimated 165-284 metric tonnes of pelagic fish and 865 metrics tonnes of reef fish entered the local market annually, though other countries consumed far more pelagic fish from Palau’s waters, according to a 2019 report by the Palau National Marine Sanctuary-Socioeconomic Baseline Project.

Palau’s minister of natural resources, environment and tourism, Umiich Sengebau, admitted there is no quick fix to the vacuum left by foreign fishing fleets.

“While Palau has begun to feel the unfortunate effects of such a shortage [of tuna in local markets], work is ongoing to address it,” he said.

So what has been done? Sengebau said the ministry has taken delegations of local fishermen to Japan and Indonesia to learn about fishing cooperatives, and plans to help them buy from Indonesia a pole and line fleet, which would allow tuna to be captured one at a time. Japan will supply a pole and line vessel to Palau in 2021.

He added that the ministry has purchased a 20-foot container for local fishermen to use as cold storage, and construction will soon begin on a dedicated fish market where they can sell their catch.

Japan’s government has partnered with the ministry to provide training to fishermen on fishing techniques, and the ministry will provide small grants through the Project Development Fund from the Pacific Islands Forum Fisheries Agency (FFA).

The partnership with Japan has proved controversial. It prompted Palau to change the sanctuary law in 2019 to permit Japanese longliners from Okinawa to land their catch at Palau’s ports, to compete in Palau’s domestic fishing zone and to export catches from there.

Palau also changed the boundaries of the domestic fishing zone to make it easier for foreign ocean-going vessels to access it without trespassing in Palau’s no-take waters.

Prior to the sanctuary law, Okinawa boats caught between 500 and 1,500 metric tonnes of fish a year in Palau’s waters.

President Remengesau defended the move, saying Palau was “looking at a bigger picture”, seeking to be part of promoting a global marine protected areas target of 30%. Campaigners are pushing for the target to be included in the UN Convention on Biological Diversity, which will have its next major meeting – COP15 – in Kunming, China, in May 2021.

The sanctuary meant Palau was leading a global initiative to improve ocean health, he said.

The Palau International Coral Reef Center (PICRC), which administers the sanctuary, commissioned a study of yellowfin tuna migration patterns from fisheries biologist Dr Alexander Filous of the University of Massachusetts.

Palau has also made progress on beefing up maritime security enforcement. Remengesau said Palau has attracted international support, including a new patrol boat arriving this year from Australia; technology partnerships with the charity Vulcan; technical expertise and cost guard training from Japan’s Nippon Foundation; and increased collaboration with the US government and coast guard.

But the future of the sanctuary may depend on the November election.

Former president and current candidate Johnson Toribiong said the sanctuary was a “good idea on paper” but needs to be reconsidered: “You can’t really have a continuing supply of tuna by relying on local fishermen. It takes a longline fishing boat to bring in a lot of tuna,” he said. “The boats, the crew, the fuel, the ice, the bait – it’s not cheap – and the airplane to fly the tuna to Japan.”

Three other presidential candidates have indicated their openness to reassessing the sanctuary in light of the difficult economic situation facing the nation.

The frontrunner in the race, Surangel Whipps Jr, said the sanctuary was a good initiative but had failed to deliver on its promise to create a local tuna fishing industry: “We have seen its limitation… let’s work to improve it and really commit to developing a local fishing industry. Unfortunately, we are not there yet.”

Sengebau, the minister of natural resources, environment and tourism, defended the sanctuary, saying politicians should understand its complexity. He said Palau receives economic benefits from foreign fleets despite their absence and curtailed tuna exports. Under the eight-nation Nauru Agreement Vessel Day Scheme (VDS) of tradable fishing days, fleets pay at least US$8,000 per fishing day.

Sengebau said Palau earned over US$5 million in VDS revenue and $475,480 from longline fishing in 2016. Palau continues to receive its share of the revenues, despite minimal fishing activities in its waters.

Remengesau said the sanctuary is “in sync with our history and traditions, a policy that reflects our national circumstances, and a policy that looks to the future and our sustainable development progress”. Dismantling it to settle a political score would undermine Palau’s reputation, he added.

“Our unique international selling point would be severely diminished.”

Full speed ahead: 2020 is a pivotal year for the ocean