With more than 41% of its waters already covered by marine protected areas (MPAs), Chile has proposed creating a high seas MPA on the Salas and Gomez and Nazca ridges – two underwater mountain chains that stretch 2,900 kilometres across the south-eastern Pacific and host some of the ocean’s greatest biodiversity.

The idea was introduced by President Sebastián Piñera at the virtual climate summit held by US President Joe Biden in April. Piñera said “it’s not enough” to protect only national waters (known as Exclusive Economic Zones), especially considering the global call to protect 30% of the ocean by 2030. 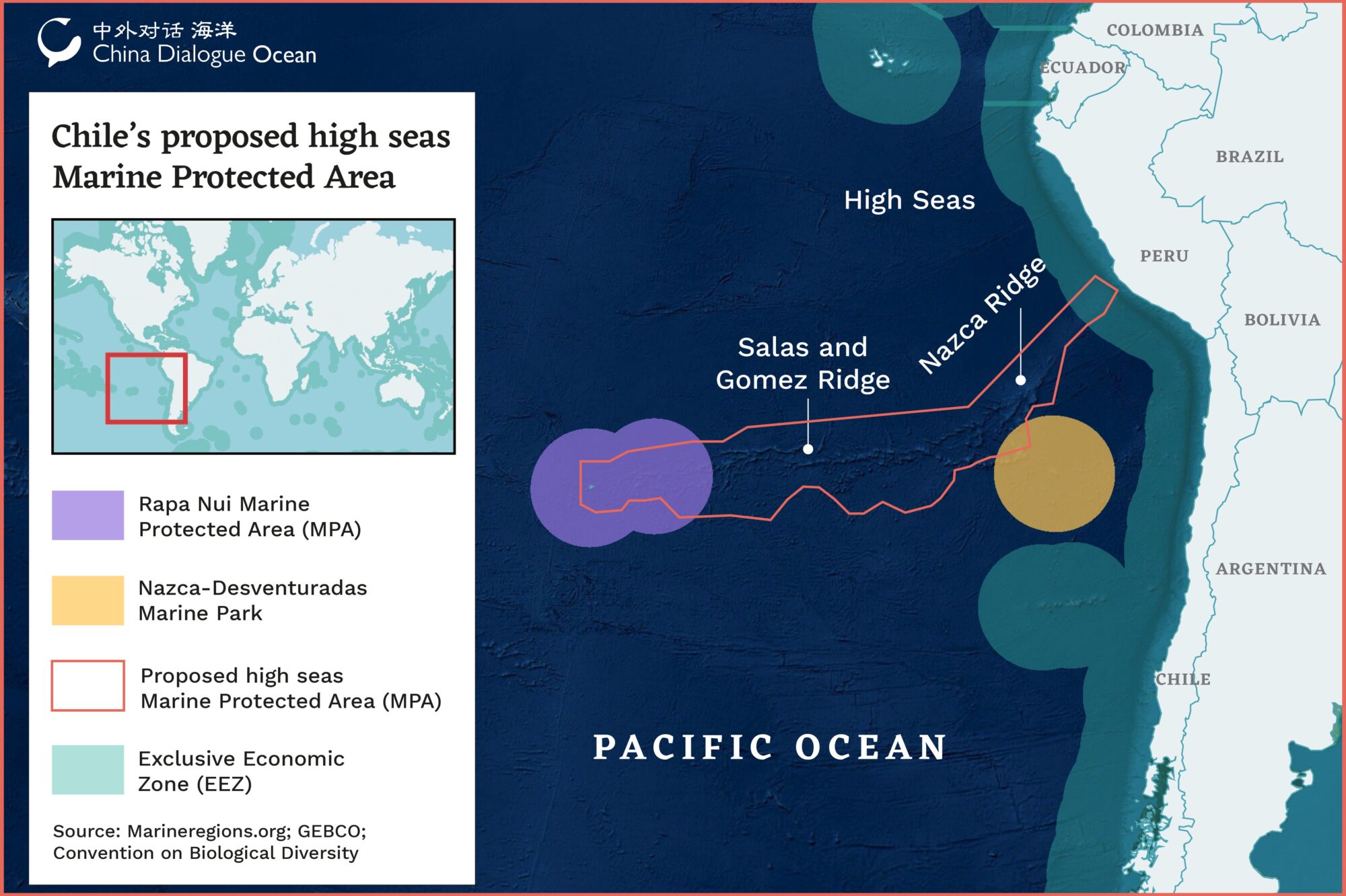 Less than 1% of the high seas are currently protected by MPAs, most of it within the nearly 2 million square kilometres Ross Sea area in the Antarctic. Countries want to move much faster by creating a global treaty for the high seas, currently being negotiated under the UN Convention on the Law of the Sea (UNCLOS).

Waldemar Coutts, director of Environment and Oceans at Chile’s Foreign Ministry, said: “While the South Pacific Regional Fisheries Management Organization will be engaged in the process, the new UN high seas treaty, currently under negotiation, is meant to [include an] international body which will oversee the long-term management of the MPA.”

Alex Muñoz, head of National Geographic Pristine Seas for Latin America, questioned the unilateral nature of the announcement, with Chile not including neighbouring countries such as Peru and Ecuador. Setting up the MPA will now require “intense diplomatic work” between all the countries in the region, he added.

The importance of the area

Ocean experts grouped under the Coral Reefs of the High Seas Coalition have long been advocating for an MPA on the Salas and Gomez and Nazca ridges. Isolated by the Humboldt Current and the Atacama Trench, the area has more than 110 seamounts with unique ecosystems. Nearly half the species found there live nowhere else.

“It’s an oasis in the middle of the Pacific. And there’s still so much to discover. Every time we go there we find so many new things,” said Carlos Gaymer Garcia, a marine conservation expert from Chile and part of the coalition. “We need to protect the area. There’s a lot of fishing around it and there’s an interest over future mining exploitation.”

The area has been identified as a prime candidate for conservation by numerous international organisations. In research last year, Pew highlighted 10 sites around the world that would help safeguard biodiversity beyond national waters – with the Salas and Gomez and the Nazca ridges being one of them.

Liz Karan, head of the High Seas project at Pew, said the ridges also offer refuge to migratory species like leatherback sea turtles and blue whales, which go to the area to breed. “It’s not the mountains itself but how important they are to the endemic species living there,” she added.

If created, the area would connect with existing MPAs on Chile’s EEZ (Exclusive Economic Zone) to the east (Nazca-Desventuradas) and to the west (Rapa Nui). While it wouldn’t be able to tackle the impacts from climate change, it would support ecological resilience and address the direct impacts of human activities on marine biodiversity.

“It’s the kind of bold proposal that the oceans desperately need as they confront the pressure of climate change,” said Lisa Speer, director of the International Oceans program at the Natural Resources Defence Council (NRDC). “Including oceans at a high-level climate summit showed real leadership by Chile.”

Globally, a group of international bodies and treaties manage ocean resources and human activity in areas beyond any state’s EEZ. These high seas areas often overlap, but virtually no mechanisms exist to coordinate across geographic areas and sectors. This has made creating high seas MPAs a legal and logistical challenge.

Formal negotiations started in 2018 to develop a treaty for the “conservation and sustainable use of marine biodiversity in areas beyond national jurisdiction”. Also known as the high seas treaty, it should establish a global framework to conserve and manage the biodiversity of the high seas, which constitutes almost two-thirds of the global ocean.

Negotiations have been delayed due to the pandemic. A meeting was first scheduled for March 2020, then postponed until September and once again delayed until August this year. Decisions are now expected to be made next month on whether organisers push the meeting back again or maintain it, and whether it will be an in-person or online affair.

“I feel confident that we have made progress and that the pause imposed by Covid has been useful to have informal conversations. Still, a lot of issues remain that won’t get solved until people can get together in formal negotiations,” Speer said. “With his announcement, Piñera is trying to keep the issue on the radar internationally.”

Ocean experts have raised the alarm in recent years over the many challenges faced by the world’s oceans, from climate change to plastic pollution. They are hopeful for an agreement for the high seas this year or next and for ambitious ocean protection goals to be included as part of a new biodiversity framework set to be discussed this year at COP15.

In a recent study, a team of researchers identified marine areas that, if protected, would safeguard over 80% of the habitats for endangered marine species, and increase fishing catches by more than eight million metric tons.

Recent efforts have raised optimism. The Blue Nature Alliance announced last month its plan to protect 18 million square kilometres of ocean globally over the next five years. Last year, 14 nations who together oversee 30% of the ocean’s EEZs committed to managing their waters 100% sustainably by 2025.

China is setting up its first marine national parks

Twenty plastic-busting inventions to clean our rivers and seas

Ocean mining – a dangerous proposition for people and planet