The global ocean has become an increasingly noisy place. Shipping, coastal construction, seafloor exploration and other human activities have created a cacophony that may be as damaging to ocean creatures as other, better-known marine pollutants such as plastics.

When Covid hit, scientists realised they had a unique opportunity to study oceans suddenly quietened by the economic slowdown. As part of the International Quiet Ocean Experiment (IQOE), which was launched in 2015, they dubbed 2020 “the Year of the Quiet Ocean”.

The aim of the IQOE has been to gather data from hundreds of hydrophones positioned around the globe, and to use that data to help determine how human-induced noise pollution is affecting marine life, something that is poorly understood. Even the importance of sounds for underwater animals is still a relatively new area of research. How do marine species use sound? What can we learn from listening closely to the underwater soundscape? And are there ways we can use sounds to help, rather than harm, the ocean ecosystem?

Find out more on Sustainable Asia 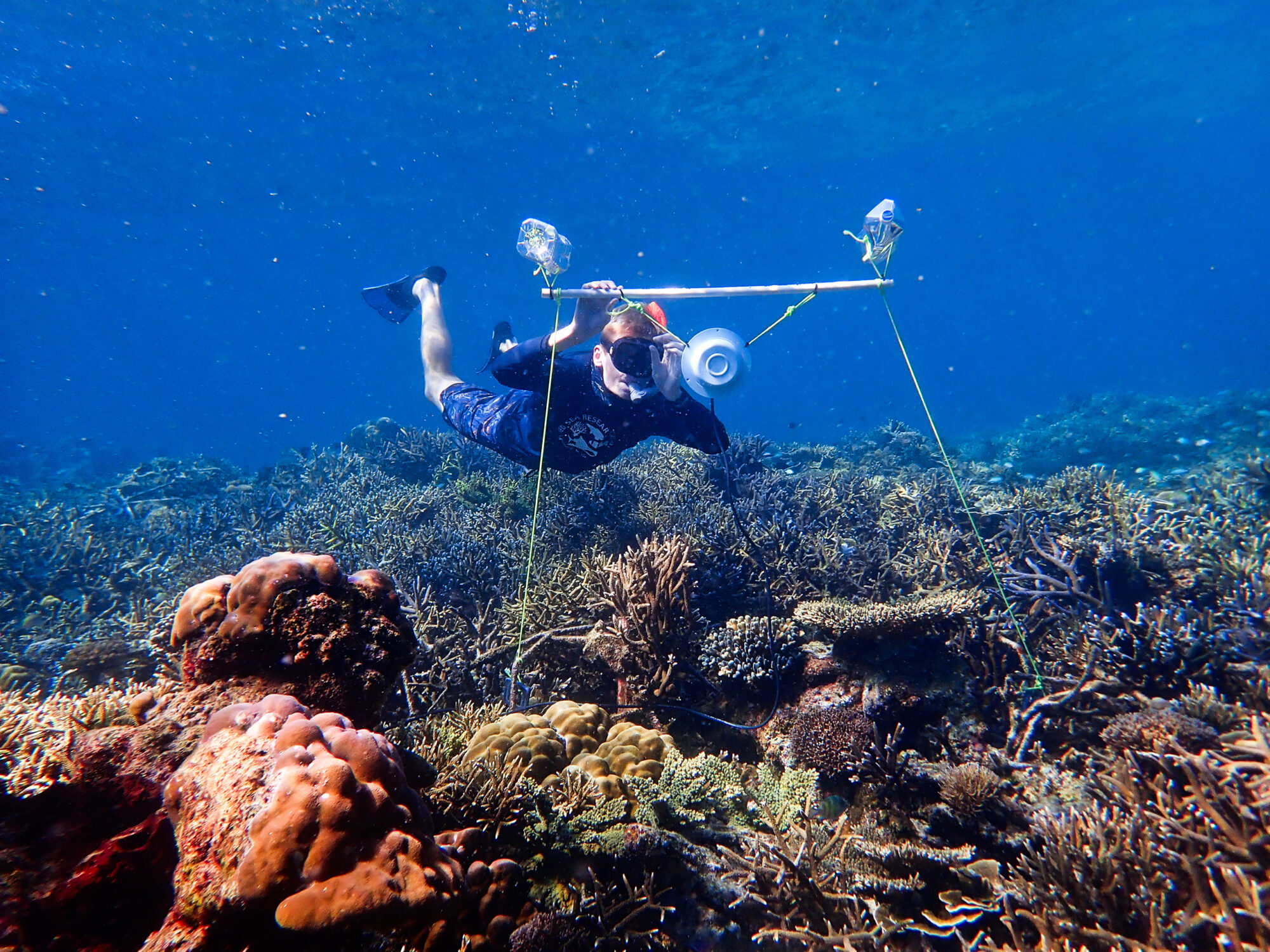 More from this series

Timothy Gordon: I think sound is a really dominant sense for animals under water. And that’s because under water, the world is completely different to how we’re used to in the air. ​​We’re used to being able to see for miles, wherever we are really, whereas if you go under water, even if the water is really, really clear, you can’t see more than about 20 or 30 metres. And so… whenever it needs information about something that’s further than 10 metres away, it’s likely to be using sound rather than sight as its primary sense.

Marcy Trent Long: Our oceans are a marvel of marine creatures that are battling human influence of all sorts, particularly near our coastlines. But a feature of this underwater world – that people are just starting to understand – is the ecosystem of sound that makes life under the sea possible.

Marcy: In this season, we’ll uncover how marine life uses sound to communicate, reproduce, move around and feed themselves by following Timothy Gordon as he researches the acoustic world of the clamorous coral reefs.

Stella Chen: Then we will turn to how human-induced noise pollution is creating havoc with this acoustic life of marine animals under water. To illustrate this, we’ll look at what has been done in China ­– specifically in Hong Kong and along the southern coast – to solve the noise pollution that has been endangering native dolphin species in the region.

Marcy: First, let’s go to the Great Barrier Reef – the world’s largest coral reef, that stretches over 2,300km off the northern coast of Australia. Teeming with life, a healthy coral reef is one of the noisiest places in the ocean.

Stella: And for researchers like Tim Gordon, using sound recordings around these reefs help gauge the health of their ecosystems, since reefs tend to go quiet as animals abandon them when conditions aren’t suitable.

Marcy: And with climate change and noise pollution impacts on marine life there, creating a timeline of recordings of this underwater acoustic world not only helps identify these impacts, but it also helps researchers generate mitigation strategies to protect marine life from these human-induced alterations.

Tim: So almost all animals on a coral reef, they hatch from an egg on the reef, and then almost immediately they’re swept out into the open ocean. And out there, they grow up and they develop for the first few weeks of their life. But then they have to come back to a coral reef as juveniles and resettle on a reef. And one of the dominant ways that from distance, they’re able to sense a reef and start to swim towards a reef, and then ultimately decide whether that’s a reef they want to stay on or not, is the sound of the reef.

Tim: Of course, once they’ve settled on the reef, in turn they become part of the soundscape itself. They start to use sound to communicate with each other, to alarm call to warn each other of coming danger, to advertise their presence and to defend territory from would-be intruders. They make sounds inadvertently as well, as they’re feeding, as they’re crunching through the coral or grazing on algae. And so loads of these different animals – all the way from the tiny little shrimps up to the really big fish and some of the mammals and the reptiles that you find on reefs – they’re all making different sounds. Or if you like, they’re like different players and different instruments in an orchestra, all contributing to this massive biological sound.

Tim: Different fish that you hear will be really distinct at different times as well. So I did one study where I recorded throughout the day, 24 hours around the clock, on a coral reef. And then I listened back to the recordings at different times: some in the night, some in the morning, some in the afternoon. And I was amazed how distinct it is, it’s like listening to a completely different ecosystem.

Tim: We find the same sort of thing with birds, and also with bats. The scientific term for it is “acoustic niche partitioning”. And what that means is that between them, all the animals have worked out which is their niche. If I sing at this particular pitch, and I sing at this particular time of day, and nobody else goes there, that’s alright, I can be heard. Whereas if you’re trying to sing the same sort of sound at the same sort of time as a different type of animal, you’re going to get in each other’s way, you’re not going to be able to communicate as effectively, because you won’t be able to hear over the din of that very similar noise. We see it on coral reefs, we see it in forests, we see it in lots of different ecosystems. Sharing the acoustic space and deliberately choosing to make noises of types and at times of day that other animals aren’t using is the key to success in the acoustic world of animal behaviour.

Marcy: So we can start to get a sound map for the activities of marine life, and begin to understand how dependent these underwater animals are on sound. Developing this recorded data helped Tim piece together his research findings that a healthy reef is a noisy reef.

Stella: But when Tim first started his research, some parts of the Great Barrier Reef were silent. Suffering from the impact of climate change, the first places he visited had bleached coral reefs void of life. He explains more in this YouTube video.

Tim (YouTube video): At the start of my PhD, I listened to reefs. I compared how they sounded five years ago to how they sound today, and it was the saddest thing I’ve ever heard. The great animal orchestra of the reef has been replaced by the sound of silence. To test the implications of that, I set up an experiment where I made a lot of fake coral reefs all around a bay and I played either the sound of healthy reefs from five years ago, or the sound of today’s degraded reefs. And I counted the number of fish that heard their way home on to my reefs. And what I found was there were far fewer fish arriving back when I played the sound of today’s reefs. That’s very worrying, because those are the fish of the future. Those fish need to make it home.

Tim: There have been research papers actually, where in areas where it’s difficult to dive or where visibility is bad, or where it’s not possible to go there very often, people try and leave underwater microphones to count the parrotfish in the area, just by listening to the number of crunching, bite sounds you can hear on the surrounding reef.

Stella: In fact, in one of our earlier seasons called “1986”, we talked about how marine ranching – a form of aquaculture in the open ocean – uses microphone sensors and acoustic data to help count fish populations. Marine ranching is growing in popularity especially in China.

Stella: Tim wants to take his research and the acoustic data he’s been gathering beyond just understanding what’s happening to the world’s coral reefs. He explains the next step in his YouTube video.

Tim (YouTube video): And that’s why I’m interested in the future soundtrack of the Great Barrier Reef. How can we use acoustics not just as a sad symptom of the decline of coral reefs, but as a tool to promote their recovery? If reefs aren’t loud enough, can we amplify them using loudspeakers? If we know which the key, loudest organisms on reefs are, can we promote their conservation? And if reefs can’t be heard, can we reduce other sources of noise pollution in the ocean to make them audible from further distances?

Stella: Underwater acoustic data is being used worldwide to combat the diminishing habitat that warming seas are creating in our oceans. For example, microphones attached to buoys have been placed near the coastline of the US and Canada to monitor the location of endangered right whales to reduce the risk of ship strikes.

Marcy: There’s still so much we have to learn about the undersea world compared to what we already know about life on land. And the world of acoustics – the fascinating sounds that marine life use just to survive – is opening up new ways to measure and analyse underwater ecosystems.

Stella: So that’s the good news. The world of ocean sounds is now open and is becoming an established field for marine research. The bad news is that, now that we realise the importance of acoustic communication amongst underwater animals, we start to fully understand how human-induced noise pollution in the ocean wreaks havoc on life under the sea.

Krill: the tiny creature with a huge ocean footprint

In pictures: Marine species on the brink