Twenty-five countries and the European Union will gather on- and off-line from 18–25 October to vote on extending protection of the Southern Ocean and on how to manage krill fishing there.

Fishing in the region is regulated by CCAMLR (the Commission for the Conservation of Antarctic Marine Living Resources). Back in 2002, CCAMLR agreed to create a network of marine protected areas (MPAs). Then in 2009, members took the first big step when they agreed on an MPA to cover 94,000km2 below Antarctica’s South Orkney Islands. In 2016, CCAMLR successfully negotiated the world’s largest “marine park”, covering 1.55 million km2 in the Ross Sea off the south of the continent. (Unlike a permanent MPA, the status of this marine park will need to be renewed after 35 years.)

Observers and marine experts are hopeful that the meeting will build on the momentum created by the COP15 meeting on biodiversity and the upcoming COP26 meeting on climate change. Still, they acknowledge that differences between countries, particularly from China and Russia, could make it difficult to reach a consensus between all members.

“The two big crises on the planet are biodiversity and climate and the one place to take concrete action on both is at CCAMLR. This is where we have to show we are serious,” said Andrea Kavanagh, director of Pew’s Antarctic and Southern Ocean work. “The fact that it will be a hybrid meeting makes final decisions very difficult.”

The proposals on the table

There are three MPA proposals up for discussion. The first would see three blocks of ocean and ocean floor protected along East Antarctica, an area rich in corals and penguin prey. Though the proposal has been discussed without success for nine years in a row, experts agree it has the best chance of moving forward. 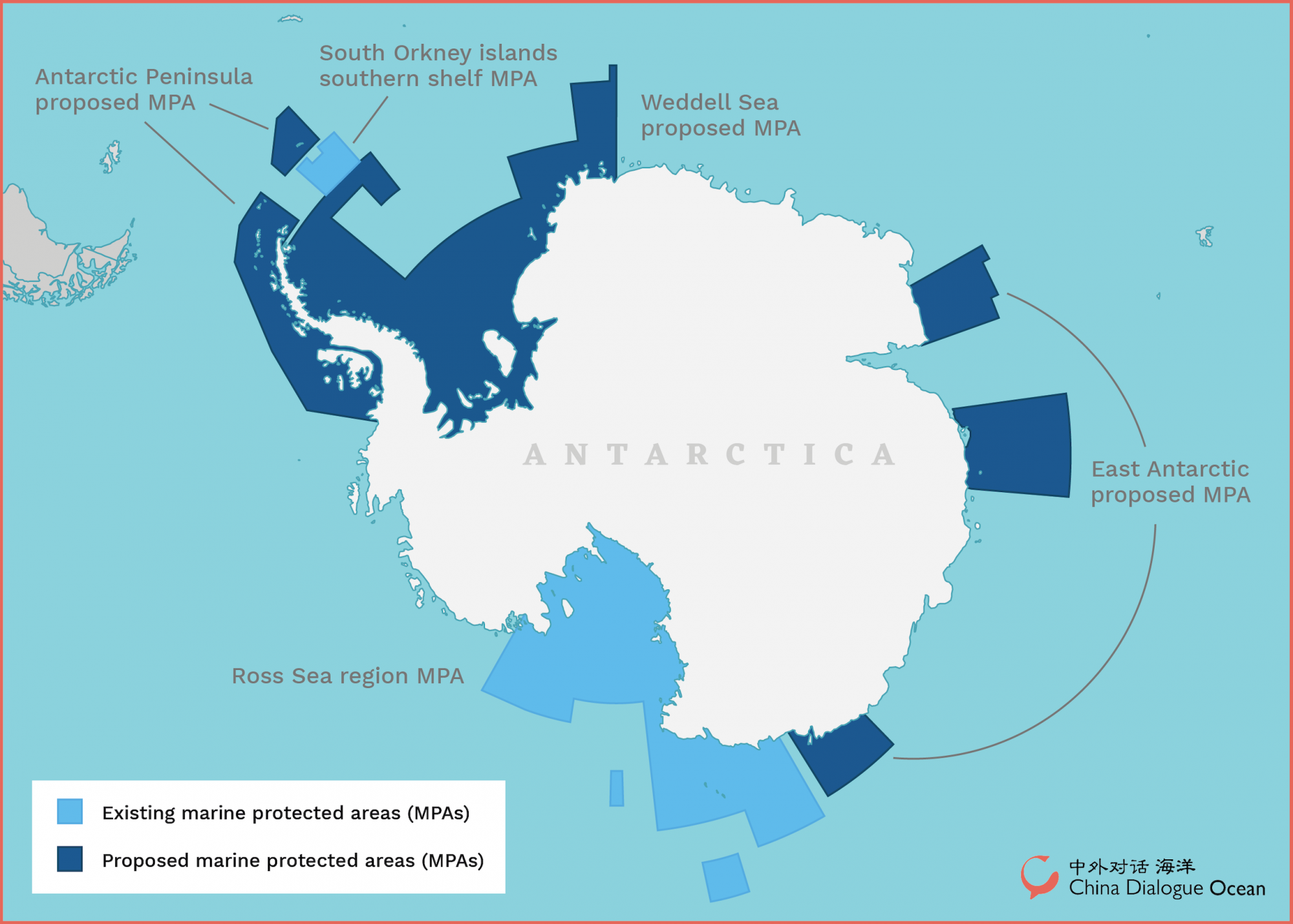 Another proposal is for a new 1.8 million km2 MPA north of the continent, in the Weddell Sea. This was put forward in 2018 by the EU and subsequently received support from other members. It would, if created, be the largest nature reserve anywhere in the world.

The third proposal was put forward in 2017 by Argentina and Chile. It would see an MPA to the west of the Antarctic peninsula, an area particularly vulnerable to the impacts of tourism, fishing and climate change. Up to three-quarters of Antarctica’s krill is also located there.

Speaking at the recent anniversary of the 1991 signing of the Protocol on Environmental Protection to the Antarctic Treaty, which prevents mining in Antarctica, US special envoy for climate John Kerry said he hoped international diplomacy was mature enough to create new MPAs this year. “If we can get the support of China and Russia, many more would join,” he added.

The two countries have been hesitant regarding the creation of new MPAs, asking for solid scientific data before agreeing to them. Still, a strong diplomatic effort at the highest level could change this, as happened with the Ross Sea MPA, said Nengye Liu, professor at Australia’s Macquarie Law School.

Geneviève Pons, co-head of Antarctica2020, a group campaigning for Southern Ocean protection, agrees, adding that 18 of the 26 CCAMLR members have formally agreed to sponsor at least one of the three MPA proposals. This number was reached this year thanks to civil society’s efforts to encourage dialogue at “the highest level.”

Antarctica’s Southern Ocean comprises approximately 10% of the world’s ocean and is home to some of its most vulnerable and important ecosystems. Millions of penguins, seabirds, fish, seals, whales and krill, the region’s keystone species, live there and need further protection.

Experts agree that MPAs are the best way to provide it. Not moving forward with the three proposals on the table could have big consequences for Antarctica’s ecosystems. The situation is especially important given that the Antarctic Treaty Protocol is expected to be reviewed after 2048.

Antarctic krill will also be on the agenda at this year’s meeting. CCAMLR’s main krill conservation measure, known as CM 51-07, is expiring this year. Member countries could either adopt a new measure, renew the current one or allow unregulated fishing.

Krill forms the base of the Antarctic food web, sustaining predator species such as penguins, seals and blue whales. The crustacean also plays a role in the fight against climate change, by feeding on carbon-capturing algae and dropping its carbon-filled waste to the bottom of the ocean.

Emily Grilly, Antarctic Program Manager at WWF Australia, believes that CM 51-07 will likely be renewed, as no consensus has yet been reached on a new conservation measure. “Krill fishing is growing every year and if it’s not regulated it would be a big problem. Fishing is already overlapping with areas of predators, impacting the food scheme,” she added.

Will there be a greater role for the oceans at COP26?