In the waters off Penglai, Shandong province, 151 islands strung out in a line mark the boundary between the Bohai and Yellow seas. The Changshan archipelago, as it is known, is an abundant habitat for migratory fish, birds and seals. It is one of 24 prime candidates for the new status of “national marine park”.

But over the last two decades the local government has been hoping to use the archipelago to drill a rail tunnel underneath the Bohai Strait, thereby linking the major north-eastern cities of Yantai and Dalian. Cars and foot passengers could ride on the trains, slashing travel times between Shandong and Liaoning provinces from ten hours to less than one. Plans for the tunnel are entering a “critical stage.”

Is building the tunnel economically viable? What impact would it have on the Bohai Strait and the Changshan archipelago? Would enough biodiversity remain for the area to still warrant national marine park status? 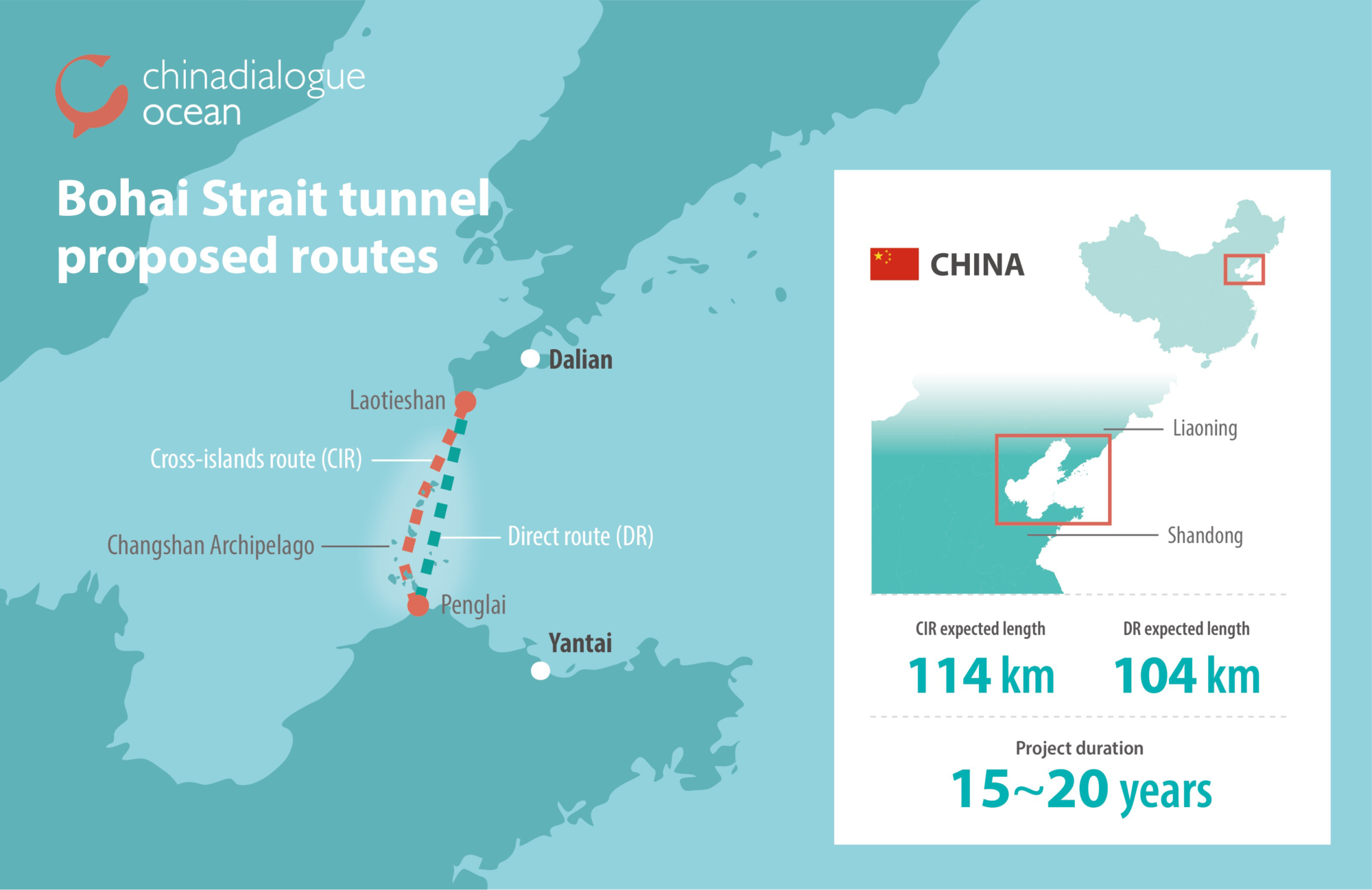 The Bohai Sea is largely enclosed. Only a 100 kilometre strait forms its opening, separating Yantai and Dalian. Circling the sea to travel between the two metropolises is a 1,500 kilometre trip. The tunnel would reduce the travel time to under an hour and surpass in length the world’s longest subterranean passages – the Seikan Tunnel in Japan and the Channel Tunnel connecting the UK and mainland Europe.

Since Yantai’s deputy mayor Liu Xinhua first proposed the idea in 1992, more than 10 years of studies have been carried out. In 2011, the State Council called for further research as part of “blue economic” development plans for the Shandong peninsula, thus giving the tunnel national strategic importance. Then in 2012 the State Council commissioned the Chinese Academy of Engineering Sciences to investigate. Provincial plans for the 13th Five Year Plan (2016-20) also covered preparatory work on the project.

Construction would be a costly, difficult and environmentally risky undertaking, hence the 27-year delay. Preliminary studies for the Seikan and Channel tunnels were similarly long processes. Various questions have to be answered aside from economically viability. Is the local geology suitable? How should it be constructed? Can the risk of earthquakes be mitigated?

Sun Jun, also of the Chinese Academy of Engineering Sciences, has put the initial project budget at 300 billion yuan (US$44 billion) – more than the 200 billion paid for the Three Gorges Dam – and construction time at 15 years. But commentators have pointed to the Hangzhou Bay Bridge, which cost 20 billion yuan rather than the expected 11.8 billion.

There is another, greener vision for the Bohai Strait.

Since Xi Jinping got behind the idea of the “ecological civilization” in 2012, conservation has become a much higher priority in China. That sped up the building of a national park system, intended to increase the amount of protected land in China and consolidate the fragmented and overlapping existing system. In 2015, the State Council approved trials of national parks in nine provinces. In 2017, it published overall plans for establishing the system. Huge land-based national parks were planned to protect animal habitats and ecosystems.

Meanwhile the State Oceanic Administration (now part of the Ministry of Natural Resources) identified two dozen possible sites for marine parks, including the Changshan archipelago. It is one of China’s most important migratory bird routes, with almost one quarter of all China’s bird species passing through. It is also a habitat and breeding ground for the spotted seal, a Class 2 protected species, protected by the government.

Though only 56.8 square kilometres in size – smaller than the area enclosed by Beijing’s second ring road – the islands are already home to a marine park, geopark, forest park and bird reserve.

Wang Yumei of Ludong University thinks that environmental impact assessments for the tunnel project should pay special attention to migratory birds and the spotted seal. So far there has been no research on potential impacts to these species.

Sun Fenghua of the Chinese Academy of Sciences has written of the need for “serious research into all issues associated with construction of the tunnel… We must not proceed until these questions are fully understood.”

Two possible building approaches are currently preferred. A single submarine tunnel and a cross-island version mixing tunnels and bridges to span the Changshan archipelago. Construction on the islands will be necessary whichever approach is chosen, as the single tunnel will require vertical shafts to be dug on two islands to facilitate excavation and ensure safe operations. The bridges required for the mixed approach would affect a larger area.

Wang Yumei has written of the environmental impact: “Large-scale temporary infrastructure and buildings would be built, machinery would have to be moved about, construction workers would be walking around. All of this would disturb the ground.” She also points out other factors worthy of consideration: storage of excavated earth; use of land for construction; noise, water and dust pollution; and pollutants from vehicles using the tunnel.

Though the late head of the project team Wang Mengshu was clear the tunnel should be built and land has been set aside in both Yantai and Dalian, many doubts have been raised about its necessity and feasibility.

Cake and eating it?

To date, no detailed plans have been made available for either the tunnel or the national marine park.

The State Council has ordered “research and proposals for national park sites and their number and size” but has not put forward plans for specific parks, either on land or water.

Trials of the national park system are underway at 10 sites, which are due to be considered for formal national park status in 2020. Future plans for national land and marine parks will become clearer once lessons from the trials have been learned.

There is still a long way to go before tunnel construction could start. Detailed surveys of local geology and hydrology can only begin once the overall plan has been approved. That will be followed by feasibility and cost studies, and finally a go-ahead from the State Council. An environmental impact assessment will also be needed.

The state has not yet fired the starting gun in either case.

Wang Yamin, a professor at Shandong University, thinks that both the tunnel and the park are needed, but more data and analysis is required to see if they can coexist.

“The tunnel needs to be approached very carefully, with rigorous formal analysis, with wildlife considered and experts involved,” he said. “The tension between the environment and development is an old one, but development is central. Environmental protection is necessary to ensure that development is sustainable.”

The perilous voyage of a green sea turtle