It is one of the most remarkable rebranding exercises in the natural world. In just over a decade, scientists and environmental campaigners have changed global attitudes to the muddy fringes of our planet.

Dismissed and destroyed for centuries, sediment-heavy mangrove swamps, tidal marshes and seagrass meadows have traditionally been viewed as an obstacle to progress and development. But now these coastal and ocean ecosystems are hot property, having become valued for their ability to capture what is dubbed “blue carbon”.

“People have been talking about the vital role that mangroves play in fisheries for 50 years, and never got much traction,” says Cath Lovelock, an expert on the ecology of coastal plant communities at the University of Queensland, Australia. “And then ‘blue carbon’ comes along and all of a sudden what was considered sort of a muddy, stinky place is seen by people in a different way.”

What is blue carbon?

Blue carbon sounds a lot better than it often looks. There’s not much here that’s blue, for a start – if anything, it tends to be brown. The label “blue” comes from its association with the sea: the carbon is captured in the organic matter, mainly decaying leaves, wood, roots and dead animals, of ocean and coastal ecosystems. This carbon is sequestered when these materials are buried beneath sediments that accumulate on the sea floor.

As natural habitats go, these environments are among the most threatened on the planet. Since 1900, more than half of the world’s wetland areas have been lost – drained for agriculture, dredged to allow access, and developed so people can live in houses and apartments with sea views.

“In Australia, nearly every single airport was built on top of what was a salt marsh. Probably every single industrial development in coastal cities has occupied that land. The Sydney Olympic Park, for example,” Lovelock says. “That’s because they just weren’t valued at all. And now this is the start of their proper evaluation.”

What is blue carbon’s storage potential?

Reframing these ecosystems as blue carbon sinks has helped to focus attention on their importance to climate change and its mitigation. The flipside of their ability to accumulate and store large amounts of carbon over thousands of years is that they can also release vast quantities of it when degraded or destroyed. Protecting these ecosystems can keep their large carbon stocks from entering the atmosphere. Restoring them enhances their ability to draw carbon down from the atmosphere.

For example, one of the largest ever ecosystem restoration projects was the rehabilitation of the Can Gio Mangrove Forest Park in the Mekong Delta, which had been destroyed by the US Air Force during the Vietnam War. Since 1978, a restoration programme has run at the park, which is now home to around 450km2 of mangrove forests that, in 2016, were estimated to have the capacity to store the equivalent of 152 megatonnes of carbon. By comparison, Vietnam’s annual emissions for 2020 were 253 megatonnes.

Late last year, an international team of scientists produced the first estimates of just how much blue carbon is stored across the world, and its potential to help us tackle global warming. The researchers calculated that three key marine habitats – seagrass meadows, mangrove and marsh – may collectively store more than 30 gigatonnes of carbon. That’s about three times the amount emitted in China each year.

Protecting these ecosystems and avoiding the release of their significant carbon stores will be vital in the coming decades. As their sediments can continue to accumulate over time, blue carbon ecosystems do not saturate in the same way as terrestrial forests, and store more carbon per hectare. Furthermore, adding to their capacity by restoring degraded and lost blue carbon ecosystems could see an extra 0.8 gigatonnes of carbon absorbed each year by 2030, the researchers estimated – around 3% of annual global emissions.

Peter Macreadie, an environmental scientist at Deakin University, Australia, who worked on this study, published in Nature Reviews Earth & Environment, says: “It is a really high-quality form of carbon draw down. We’re talking carbon being drawn down [into sediments] over millennial time scales.” Having been formed over thousands of years, if left undisturbed these sediments could continue to absorb carbon long into the future.

What other benefits do blue carbon ecosystems provide?

Macreadie points out that blue carbon ecosystems have other benefits too. They play important ecological roles in nutrient cycling, as well as being habitats for a broad range of marine and terrestrial species. They also protect coastal areas from floods and dangerous weather, and help support the livelihoods and well-being of local people. 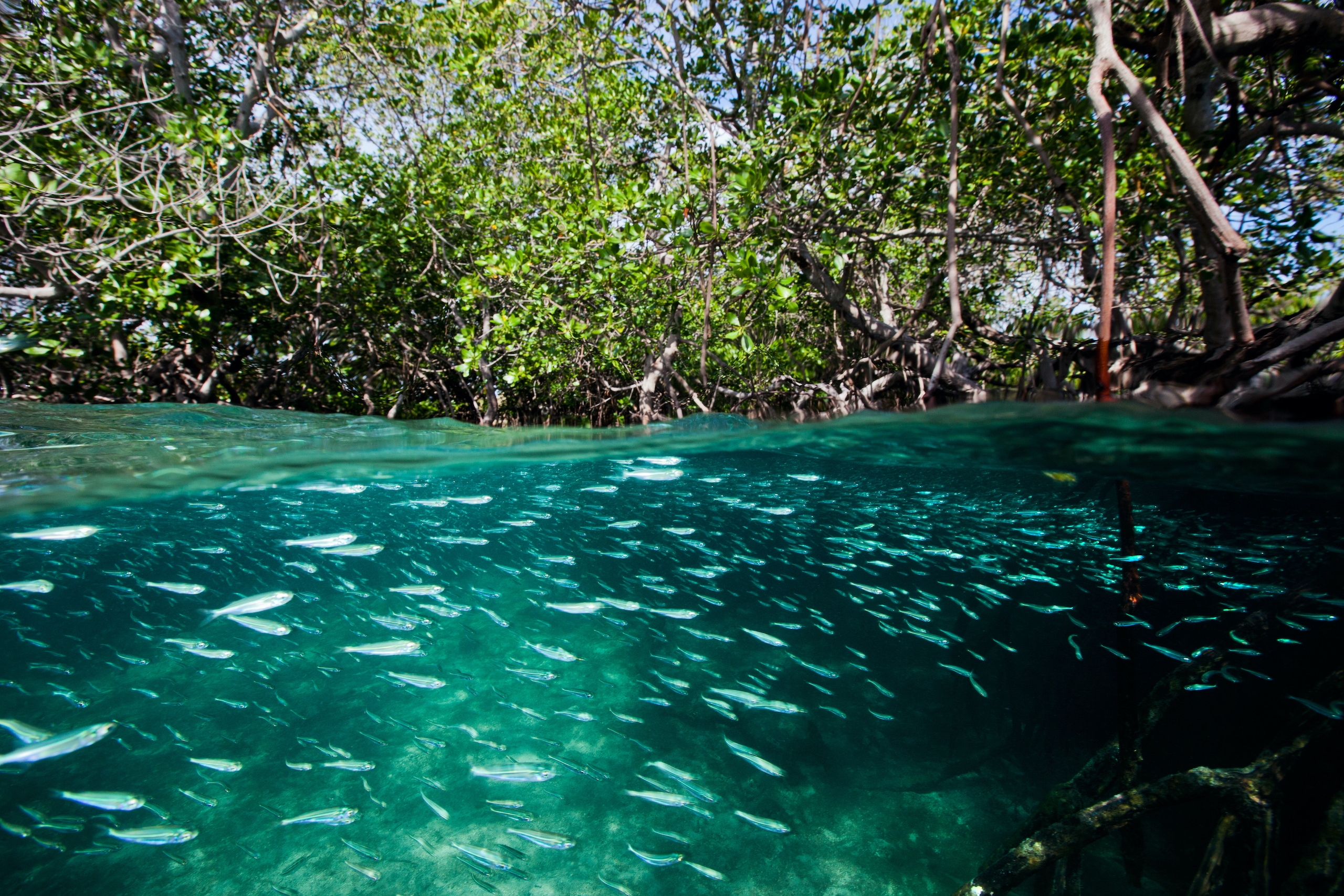 Mangroves in Komodo National Park, Indonesia. In addition to capturing blue carbon, mangroves provide a habitat for a wide variety of species and act as a natural barrier against flooding. (Image: Paul Hilton/Greenpeace)

“For a lot of developing nations, a healthy mangrove forest could mean the difference between life and death the next time an extreme weather event comes through, like a tsunami or a cyclone or hurricane,” he says. “And about half the world’s fisheries derive ultimately from seagrass, marshes and mangrove forest. So, they support lives and livelihoods in that way.” These ecosystems act as nurseries, providing juvenile fish with access to food and protection from predators.

In other words, while blue carbon and the link to climate may be a fashionable way to get the world interested in these previously unheralded and unloved pits of sediment, the benefits of protecting and restoring them go way beyond.

“Carbon sequestration is only one, and by far not the most important, ecosystem service provided by blue carbon ecosystems,” says Wilfried Rickels, director of the Global Commons and Climate Policy Research Centre at the Kiel Institute for the World Economy, Germany. “Accordingly, one should focus in the first place on protecting and regenerating these ecosystems and should not solely focus on their carbon sequestration.”

Mangrove restoration scales up in Indonesia

The case for conserving kelp