A new film has revealed the scale and nature of the impacts that deep-sea mining would have on life in the Pacific Island region, from direct damage to seafloor ecosystems, to tailings waste and sediment plumes.

In the interests of transparency, I was involved in writing part of the film’s script.

Blue Peril was made in response to the rush by governments and companies to begin mining the Clarion Clipperton Zone (CCZ), an area of the Pacific spanning 4.5 million square kilometres between Hawaii and Mexico – equivalent to the size of the European Union.

The documentary makers say it provides the first independent visual investigation of the tailings waste and sediment plumes that mining operations would create, and of how they will affect marine life.

The modelling uses data from scientific literature and international oceanographic models to predict how far tailings and pollution would spread. It presents the findings in tandem with a view from the Pacific islander communities that stand to be most affected.

“This is the first modelling of the impacts in the CCZ conducted independently of the deep-sea mining industry and the International Seabed Authority, which promotes it,” said Dr Helen Rosenbaum, coordinator of the Deep Sea Mining Campaign (DSMC).

DSMC produced the film along with INTERPRT, a Norwegian environmental research agency, and Ozeanien Dialog, a German church-based NGO focussed on Oceania.

The seabed in the CCZ is rich in polymetallic nodules – small rocks containing minerals including copper, nickel, cobalt, iron and manganese.

Mining proponents argue that these metals are required to manufacture batteries for electric vehicles and in the power arrays that distribute renewable energy. This argument is countered by rapidly evolving battery technology and the possibilities of the circular economy.

The Metals Company (TMC), a Canadian mining firm, is pushing for mining to begin in 2024 in its Nauru-sponsored licence area.

The International Seabed Authority (ISA) met in November at its headquarters in Jamaica to continue negotiations on creating the rules that would govern eventual mining operations.

At present, contractors are only authorised to “explore” large areas of the seabed, with 17 such licences issued. However, “exploitation” for precious metals could begin in as little as nine months. This deadline was imposed by the triggering in July 2021 of an arcane rule by Nauru, which holds a contract with TMC, obliging the ISA to consider an application for a mining licence within two years.

Concerns were raised at the ISA’s November meeting about the authority’s approval of a “trial run” by TMC, which was effectively a full mining operation in the CCZ, albeit small scale. ISA member countries and observers called out the lack of transparency and due process, and again questioned the ISA’s suitability as a regulatory body.

The authority is made up of 167 member states and the European Union. It is entrusted with organising, regulating and overseeing all mineral-related operations in the international seabed area for the benefit of all people. However, the body has been accused of lacking accountability, transparency and inclusivity. At an earlier meeting in August, civil society organisations were reported to have been shut out of some of the sessions.

“How can a few minorities decide what’s good for the whole of humanity when the majority are locked outside the door? We need space for dialogue and to be heard,” said Tita Kara from the Civil Society Forum of Tonga.

Blue Peril reveals that during the potential 30-year licensing period that could be granted to TMC, its operations could directly damage an area of seabed the size of Hawaii. Mining machines taller than a two-storey house would also churn up plumes of sediment as they scrape their way over the sea floor. These plumes, which may carry toxic heavy metals, would spread and smother marine life.

Nabil Ahmed, a professor at the Norwegian University of Science and Technology, and founder of INTERPRT, explains how Blue Peril’s predictions were made.

“We created a 3D model using spatial imagery programs and incorporated estimates of mining rates from the scientific literature to predict and visualise how much of the seabed would be destroyed. The spread of the plumes that would be generated on the seafloor, and by the mining waste planned to be discharged 24/7, was predicted using oceanographic methodology.” 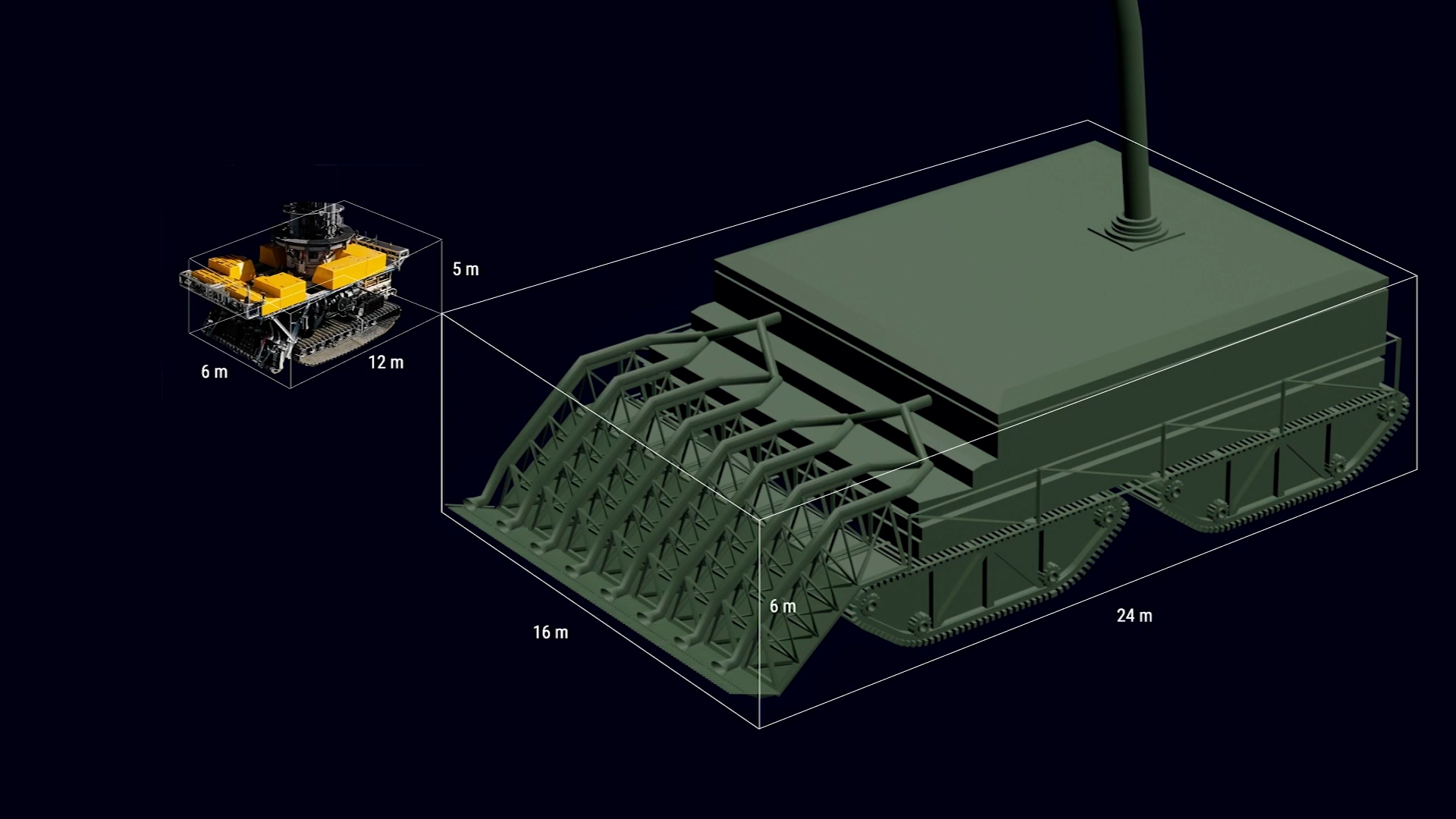 “Perhaps the most disturbing prediction made by Blue Peril is that it would take only three months for pollution discharged by The Metals Company in its licence area sponsored by the government of Tonga to reach the waters of Kiribati and Hawaii,” said Rosenbaum.

Also predicted is that in just 30 days, the dust storm created by TMC mining nodules in its Nauru (NORI D) licence area could travel as far as 200 kilometres, potentially endangering thousands of marine species.

“No research has been conducted yet on the toxicity resulting from mining nodules in the Pacific, but Portuguese scientists have shown that low concentrations of metals in the waste from the mining of hydrothermal vents quickly kills deep sea corals in the Azores,” said Rosenbaum. “This work illustrates the vital importance of researching the toxicology of plumes as well as the distance they can travel. Deep-sea mining should not be permitted in the Pacific without this full understanding.”

Pacific island communities are on the frontline of any impacts from deep-sea mining, both environmentally and socioeconomically. The governments of Palau, Fiji, Samoa, and Micronesia have been leading calls for a mining moratorium, which most recently got support from New Zealand, Germany and France.

“The general view from the civil society space in Tonga is to have a complete ban [on deep sea mining] because over 80% of our communities are coastal communities,” added Kara. “The ocean is part of our livelihood. We depend on fisheries products such as tuna which we send to other countries. Unfortunately, the government is not listening. The wider impact of deep-sea mining in the Pacific is going to be catastrophic because our ocean bonds us and binds us.”

Similar concerns have been raised by Fiafia Rex, the founder of Oma Tafua, an NGO on the island of Niue, who has spent much of her time working on protecting marine life around Niue and the Pacific. “Deep-sea mining may affect tuna, which is a shared economic resource among many Pacific island countries. Once that’s gone, our livelihoods are gone.”

Maureen Penjueli, the coordinator of the Pacific Network on Globalization, said that Tonga and Papua New Guinea had both reported that the ocean was dusty during 2012 mining exploration operations. “Communities found it extremely difficult to catch fish because there were so many exploration vessels in operation. [They] had to go out further into the ocean. In Papua New Guinea, deep-sea creatures were frequently found washed ashore. In addition, locals there experienced an interference of the traditional ‘shark calling’,” she said, referring to a ritual of catching shark to share among the village.

Rex says that at the grassroots level there is still much to learn about deep-sea mining for many Pacific islanders.

“In Niue, I can confidently say that 90% of the people don’t know about deep-sea mining or the fact that it will be going on in their backyard. There’s a huge problem with transparency of information around deep-sea mining in the Pacific.”

In Niue, 90% of the people don’t know about deep-sea mining or the fact that it will be going on in their backyard

Rosenbaum believes that this is where the new film has a critical part to play. “Blue Peril highlights the inextricable bond Pacific peoples have with the ocean that has sustained them for countless generations… Most of the world’s population are still unaware that this latest assault is about to wreak havoc on our oceans. We hope Blue Peril helps to inform society in general so a wide range of people – and especially those on the frontline in the Pacific – can participate in decisions about whether this industry should proceed.”

Blue Peril was first launched in June at the UN Ocean Conference in Lisbon, Portugal and has been screened around the Pacific and in other parts of the world.

The Metals Company were contacted for comment on this article but no reply was received.

Brazil’s ‘Blue Amazon’, and the promise and perils of seabed mining

In Latin America, resistance to deep-sea mining is growing

How will China’s submersibles help us explore the ocean depths?