You might not have heard of the Blue Amazon, but it’s the part of the ocean owned by Brazil. Otherwise known as Brazil’s exclusive economic zone (EEZ), it covers an area of 3.6 million square kilometres, equivalent to half of the Amazon rainforest.

Much like the Amazon itself, it is abundant in natural and mineral wealth, and this has aroused great interest in Brazil, given the country’s special rights to such resources within its EEZ.

Beyond the EEZ, there is also ever-intensifying attention – and ongoing negotiations – on deep-sea mining in international waters. Brazil wants to expand its jurisdiction to explore for and potentially exploit minerals beyond the confines of its Atlantic coastline. But experts warn that, given the lack of studies and specific legislation currently in place, such activities could cause serious damage to the ocean environment.

Which substances are found in the Blue Amazon?

Phosphate, ilmenite, potassium salts, rock salts, and even coal. Applications have been made to the government for exploring and exploiting these and other minerals and deposits in the Blue Amazon.

A large number of requests have also been made for reclaiming sand and limestone rock from the seabed.

Brazil’s National Mining Agency (ANM) has recorded 765 active requests to mine in the country’s marine area. Cumulatively, these cover more than 10,000 square kilometres. More than 70% of the requests have been made since 2010, 398 have authorisation for research, 44 are awaiting permission to begin mining and 50 have already obtained the concession. Another 268 are in the initial stage of requesting research, and five are open to prospecting requests.

What is already being explored and by whom?

The ANM has already authorised the extraction of two substances in Brazil’s coastal marine system: sand and limestone. No concessions have yet been granted for phosphate – the substance of greatest interest to the mining sector in the Brazilian EEZ – but there are 279 open requests covering a total of 5,310 square kilometres, submitted by 20 companies or individuals. Phosphate is a key material for the production of fertilisers, as well as many daily products including foods, cosmetics and electronics.

Currently, only two companies produce limestone of marine origin in Brazil. It can be used in the production of fertilisers and animal feed, as well as for shrimp aquaculture, water treatment and vitamin and mineral supplements, according to the ANM.

The São Paulo-headquartered company Oceana Minerals was granted six mining concessions in 2010, covering 11,100 hectares off the coast of the northern state of Maranhão. Meanwhile, in 2013 PrimaSea was authorised to explore for limestone in five concessions totalling just under 50 square kilometres off Bahia state, on Brazil’s eastern coast. The Bahia-based company uses the mined limestone for the manufacture of cement.

What are the risks of mining the Blue Amazon?

According to the ANM, “the current legislation that regulates mineral research and mining in Brazil does not make any distinction between submarine and terrestrial areas.”

Without ocean-specific regulation, mining activity could lead to the collapse of marine coastal ecosystems, warns Paulo Horta, a marine biologist and professor at the Federal University of Santa Catarina: “We will produce commodities that are useful for agriculture and other economic spheres, but we will compromise the functioning of the ocean system, which is a carbon sink.”

Horta highlights the disturbance extractive activities can bring upon so-called “blue carbon” ecosystems that have captured vast amounts of emissions. “The ocean has absorbed approximately 25% of the carbon we have emitted since the Industrial Revolution. By mining, we release what has already been stored and undermine the ocean’s ability to continue to store it.”

According to Horta, one of the major risks of marine mining is the dispersion of soil sediments, or plumes, which can harm important ecosystems, like the rhodolith bank that stretches 231,000 square kilometres from Santa Catarina, in southern Brazil, to the mouth of the Amazon River, between Amapá and Pará states in the country’s north.

Coveted for the production of fertilisers, rhodoliths are calcium carbonate-rich algae essential in the formation of reefs, and are great accumulators of carbon. The rhodolith beds of this Atlantic bank have reportedly been targeted by the Brazilian government for extraction. 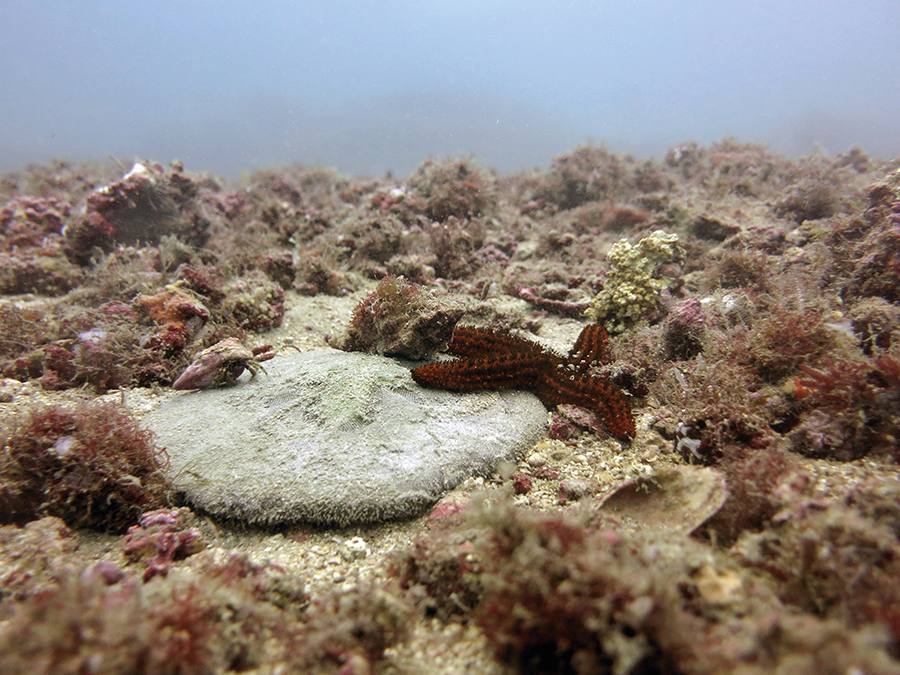 A community of sea creatures on a rhodolith bed in waters off southern Brazil (Image: PA Horta / Wikimedia Commons / CC-BY-SA-4.0)

Horta adds that plumes could reduce the productive capacity of this rhodolith bank by 70%. “It’s a very serious scenario, because many of the more than 700 applications are for shallow areas. But even those that are in deep waters produce plumes that can disperse for tens or hundreds of kilometres.”

Furthermore, the scientist says, extractive activities and the disturbances they cause would put at risk the livelihoods of thousands of families that live off fishing, tourism and mariculture in Brazilian waters.

Are there alternatives to mining these resources?

Horta advocates solutions based on the regenerative economy. Instead of depleting certain natural resources, a lower impact alternative to marine mining is regenerative ocean farming of seaweed. This approach enables the cultivation of algae in marine environments that can be used for the production of biofertilisers, and brings a range of environmental and social co-benefits. 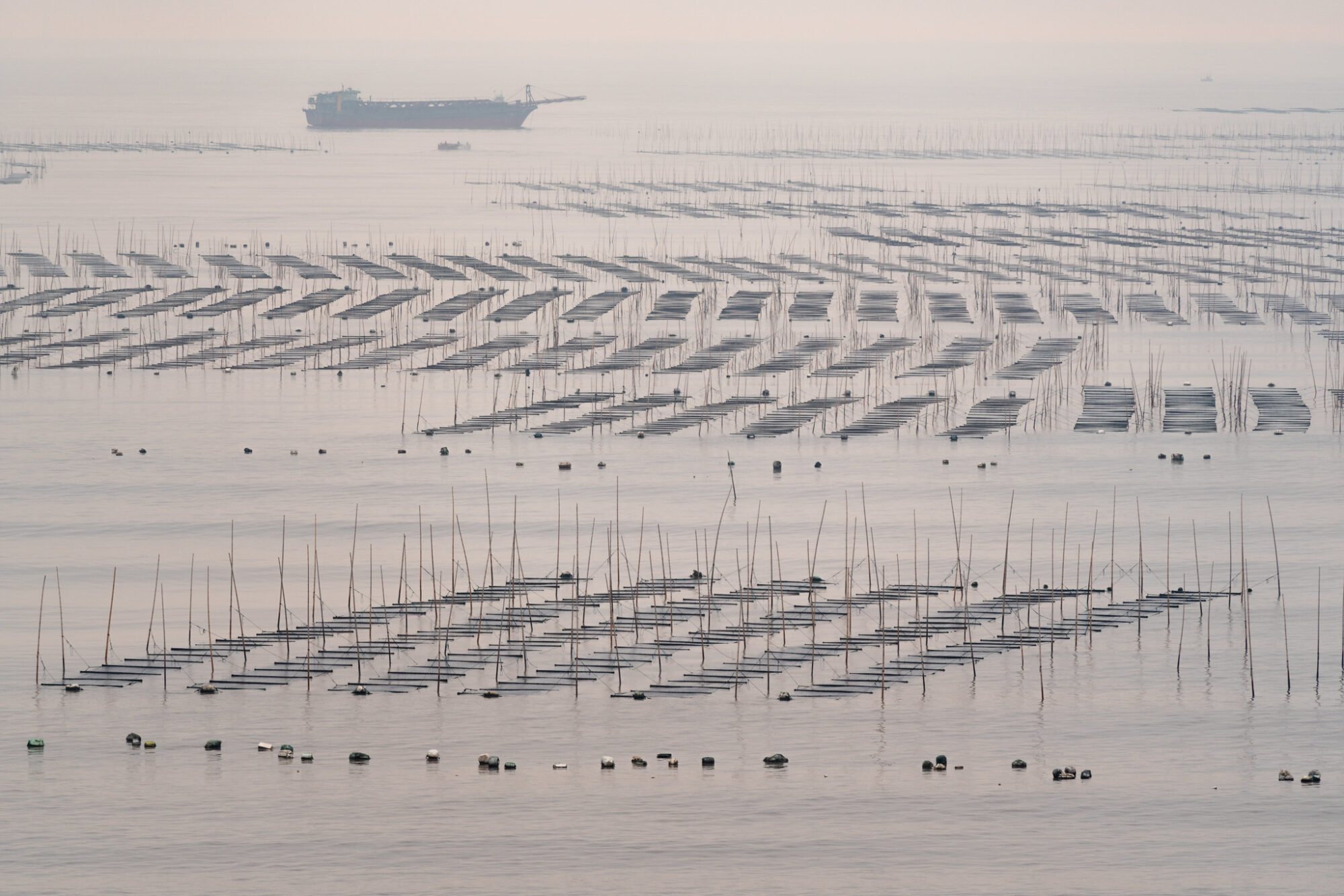 “In this way, we not only remove carbon dioxide from the atmosphere, but we also cover the damages from nitrogen and phosphorus [production] that today create dead zones around the planet,” says the scientist.

In his view, this alternative could be implemented along the almost 8,000 kilometres of Brazilian coastline, generating jobs and income and reducing dependence on imported fertilisers. There would also be economic potential for the pharmaceutical and cosmetics industries, he added.

Where are Brazil’s marine mining hotspots?

More than half of the mining requests to the ANM involve blocks in shallower waters nearer Brazil’s coast, in an area known as its continental margin. “This is the most interesting area for harnessing not only mineral resources, but the marine space as a whole, with wave, wind and green hydrogen energy,” said Luciana Felício, head of the marine geology division of the Geological Survey of Brazil (SGB), the state agency that researches the country’s mineral resources.

However, this area needs more studies. “We need to know the relief of the seabed, ocean conditions, currents and the environmental baseline of the area so that the benefits pay off without great harm to the environment,” added Felício.

One of the SGB’s current programmes involves a more comprehensive mapping of the Brazilian shallow regions, to deepen the knowledge of geology, ocean dynamics and environmental issues. According to Felício, this will be a major focus of the agency from next year. Its plan for 2023 to 2027 focuses on the country’s north-east coast, among other areas.

What does the UN have to do with seabed mining?

The International Seabed Authority (ISA) is a UN-affiliated body that defines the rules for extracting marine minerals in areas beyond national jurisdiction, an issue which featured prominently at the second UN Ocean Conference in Lisbon in June.

The ISA is still yet to produce regulation for deep-sea mining, despite it being the subject of enormous economic interest. The Pacific island state of Nauru has led the charge to permit the start of seabed mining on the high seas, by invoking a clause that would allow mining to begin in mid-2023 regardless of the rules in place.

On the other side of the argument, many scientists and activists used the recent UN conference to push for a moratorium on ocean mining until more studies on its impacts have been done.

Since 2009, the SGB has been studying the Rio Grande Rise, a chain of underwater mountains distributed over around 150,000 square kilometres, at a depth of approximately 3,000 metres. This deep-sea region is beyond Brazilian jurisdiction, some 2,300km to the country’s south. During the first expeditions to the Rise, researchers identified the presence of metals such as manganese, copper and cobalt.

To further the studies, the SGB signed a 15-year contract with the ISA in November 2015. Research soon identified rock structures similar to those off the Brazilian coast. Then, in late 2018, Brazil made a request to the UN Commission on the Limits of the Continental Shelf to claim the Rio Grande Rise and other areas within its jurisdiction. If approved, the Brazilian EEZ would grow from 3.6 to 5.7 million square kilometres.

The claim is yet to be addressed by the commission. Brazil has no permission for economic exploration of the Rio Grande Rise while it awaits a response.

Are big players monitoring this sea of possibilities?

Brazilian operations in the deep sea are still in the research phase, and have not yet attracted the interest of domestic companies, says Felício. The ANM has not received requests for mineral research in deep water.

Petrobras, the partly state-owned Brazilian petroleum giant, is reportedly already aware of the presence of pockmarks in the Rio Grande Rise. From these crater-like depressions in the seabed, fluids and gases are released, mainly methane, which may signal the presence of hydrocarbons. However, the company told us that it does not at present envision exploring the area, due to the scarcity of studies.

Since 2017, Maila Guilhon has been studying strategies and guidelines to preserve ecosystems in international waters where mining exploration may take place. For the biologist, it is not clear if Brazil wants to mine in the deep sea. Despite being the country with the greatest command of personnel, infrastructure and scientific research techniques in the South Atlantic, “Brazil does not have the technology to carry out this exploration” and would have to make international partnerships.

In addition, the country lacks a regulatory framework for deep-sea mining. “It is very important to have a regulatory basis, like a ‘Law of the Sea’, so that we have guiding principles and good environmental practices,” Guilhon adds. “Depending on what will be done, the precautionary principle is the first point to be taken into consideration, in addition to the participation of civil society.”

Guilhon is conducting part of her doctorate research at the Institute for Advanced Sustainability Studies in Potsdam, Germany, in contact with multiple parties involved in the ongoing discussions over deep-sea mining. China, India, Russia and the United Kingdom are some of the main countries interested in pursuing such activities, while nations from the European Union, Latin America and the Caribbean have been vocal in their opposition to this exploration and potential exploitation.

This article was first published on Dialogo Chino.

In Latin America, resistance to deep-sea mining is growing

Interactive: Mapping the wonders of the underwater world