China started planning an “ecological redlines” policy in 2011 to protect certain ecologically important areas by ensuring their size, nature and functionality remained unchanged. To assess the potential biodiversity benefits of the redline system, we recently compared coverage by national nature reserves and by redline areas, finding that the new system triples the number of important waterbird sites protected in China.

Establishing such protected areas is essential to conserving biodiversity. In 2010, at the COP10 negotiations under the UN Convention on Biological Diversity (CBD), a global target was set of protecting 17% of the world’s land and 10% of its ocean by 2020. This was only partially achieved.

The world urgently needs new and more ambitious targets to prevent the rapid loss of global biodiversity. One such proposal, presented in a draft of the CBD’s “post-2020 global biodiversity framework”, is to have 30% of land and ocean areas protected by 2030. This will be discussed at the second and final part of CBD COP15 in Montreal on 7–19 December. It was also a key agenda item at the recent COP14 of the Convention on Wetlands.

The redlines cover far more territory than other kinds of protected areas in China, and often, they are home to extensive human activities. This means they cannot all be sealed off in the same way as nature reserves. In some cases, such as reservoirs and sources of drinking water, the primary goal of redlines was not to protect wildlife, but wildlife has benefited nonetheless.

The redlines have been drawn based on rigorous scientific assessment. Other protected areas are often the result of a compromise between ecological and local development needs. The “top-down” design of the redline system means decision-makers manage the entire landscape in a unified and holistic manner. Of course, this is sometimes easier said than done. Effective redline management requires experimentation, innovation and flexibility.

The ecological redlines policy could meet the CBD’s definition of an OECM or “other effective area-based conservation measure”. Since 2019, when the IUCN published guidance on recognising OECMs, along with a database, they have counted towards protected area targets.

China protects about 4.1% of its ocean area with various types of reserve, but ecological redlines cover over 25% of its land and sea areas (and include the vast majority of reserves). So, classing redline areas as OECMs would make a huge contribution to achieving the CBD’s targets, both for China and other countries if they were to adopt a similar system.

Our calculations were based on conservative estimates of waterbird activity. We defined a site as protected by a national nature reserve if it was within 4km of one. In reality, waterbirds may commute further afield between foraging and resting sites. Our research only referred to reserves with the strictest protections and clear data on boundaries. We did not consider whether the 172 sites were part of reserves at levels other than the national level. We found that some key wetlands are only protected by the redline system. 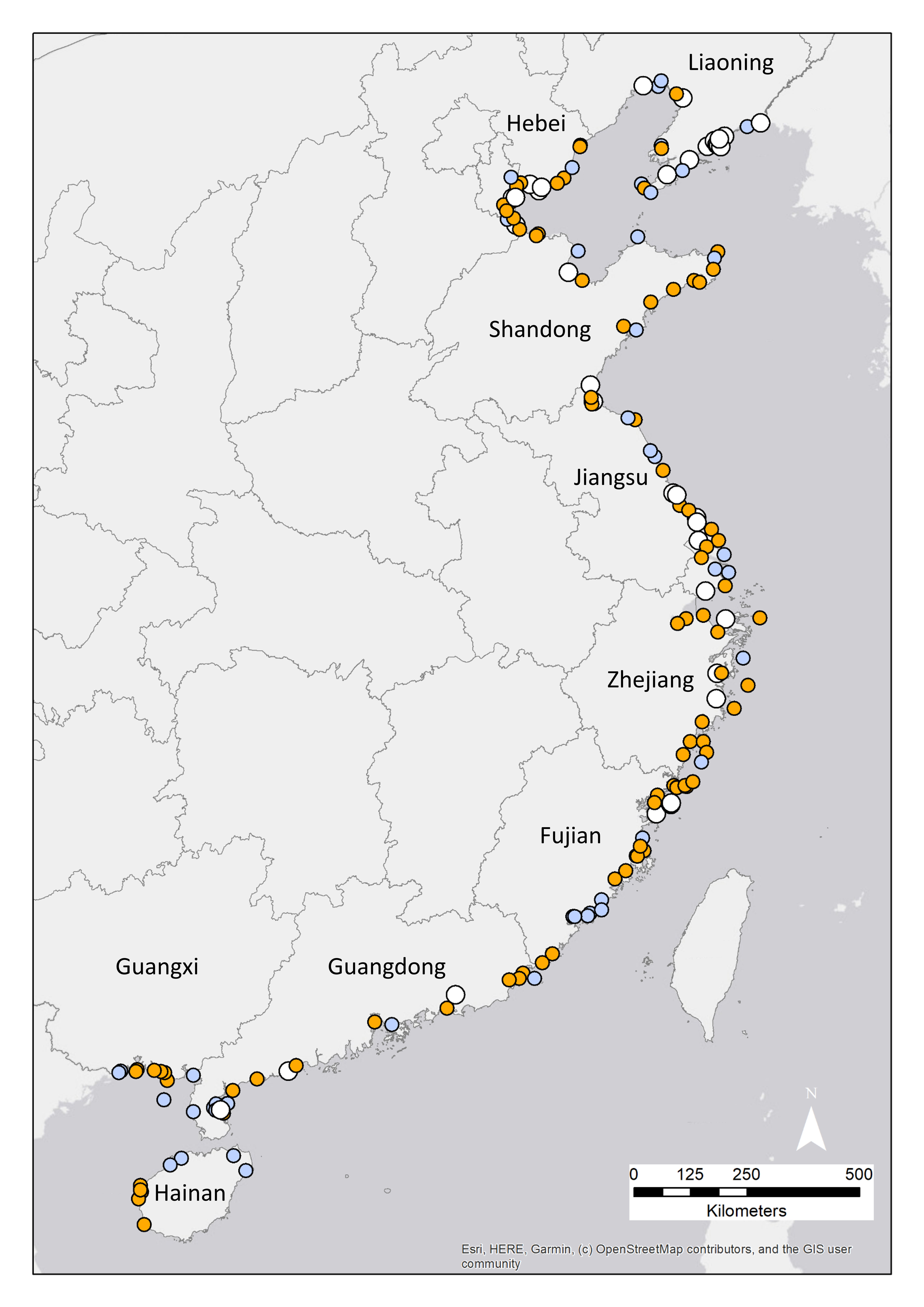 172 coastal waterbird sites in coastal China, and their protection status: Unprotected sites are marked white, those within 4km of national nature reserves are blue, and sites protected only by ecological redlines are orange. (Source)

These included wetlands in Pinggang, Guangdong and Xichang, Guangxi, which surveys have recently identified as regular wintering and resting grounds for the spoon-billed sandpiper. Their significance for this critically endangered bird means they meet the standard for recognition as an internationally important wetland. But setting up a conventional reserve takes considerable time and resources, and requires coordination across government departments. Fortunately, the two sites already had some measure of protection as they were near redline restriction areas (meaning appropriate development is possible only if the size, nature and function of the area remain unchanged) set up to protect fishing, tourism and mangrove swamps, and a marine redline ban zone (where no development is permitted).

There is a similar situation with the great knot, a Class II protected bird. Surveys have recorded 60,000 great knots, 14% of the global population, stopping to rest and feed in Liaoning province’s Yingkou and Gaizhou before continuing on their migratory journey. But the knots also use other sites that are not part of national nature reserves. Redline restricted areas again offer some protections.

Ecological redlines don’t just protect far-off, unnamed wetlands – the system once saved Shenzhen Bay itself from development. The bay lies across the river from the Mai Po Wetlands, and some of its intertidal wetlands are important waterbird habitats, despite lacking national nature reserve protections. Monitoring found that waterbirds such as the common redshank, which winter on Shenzhen Bay, do not confine themselves to the Mai Po Wetlands or the nearby Futian Mangrove Nature Reserve – they are found all over the bay’s coastal wetlands and shallow waters. In 2020, a developer hoping to run sightseeing ferries proposed dredging a navigation channel through the wetlands. The plans were rejected, in part because of the redline status.

Various kinds of protected area combine to protect all parts of Shenzhen Bay that are important for waterbirds (Map: China Dialogue Ocean)

We have found that accounting for redline areas triples the number of important waterbird sites protected in China. If properly implemented and managed, the system could have significant benefits for waterbird conservation.

China does not yet have a system to identify or certify OECMs. But if redline areas were to be recognised as such, the country could expand the size and scope of its internationally recognised protected areas and conserve biodiversity that falls outside of the existing reserve system – as well as providing a model to be followed elsewhere around the world.

China is setting up its first marine national parks