Three women and a young diver set out on a motorboat from Wasini Island, south-east Kenya, to monitor the seagrass they have planted in a coral garden.

One of them, Samira Musa, a 43-year-old mother of three, recounts how years of dredging and other human activity, including tourism, has damaged the marine habitat along Wasini. A team from her local area, she explains, has worked hard to restore the island’s seagrass beds and coral reefs.

“Being a coastal community and understanding what life underwater means, we had to step up and restore the seagrasses because of their benefit to us and also to everyone else who depends on the ocean,” Musa says. “The seagrass is even more important because that’s where the fish multiply.” 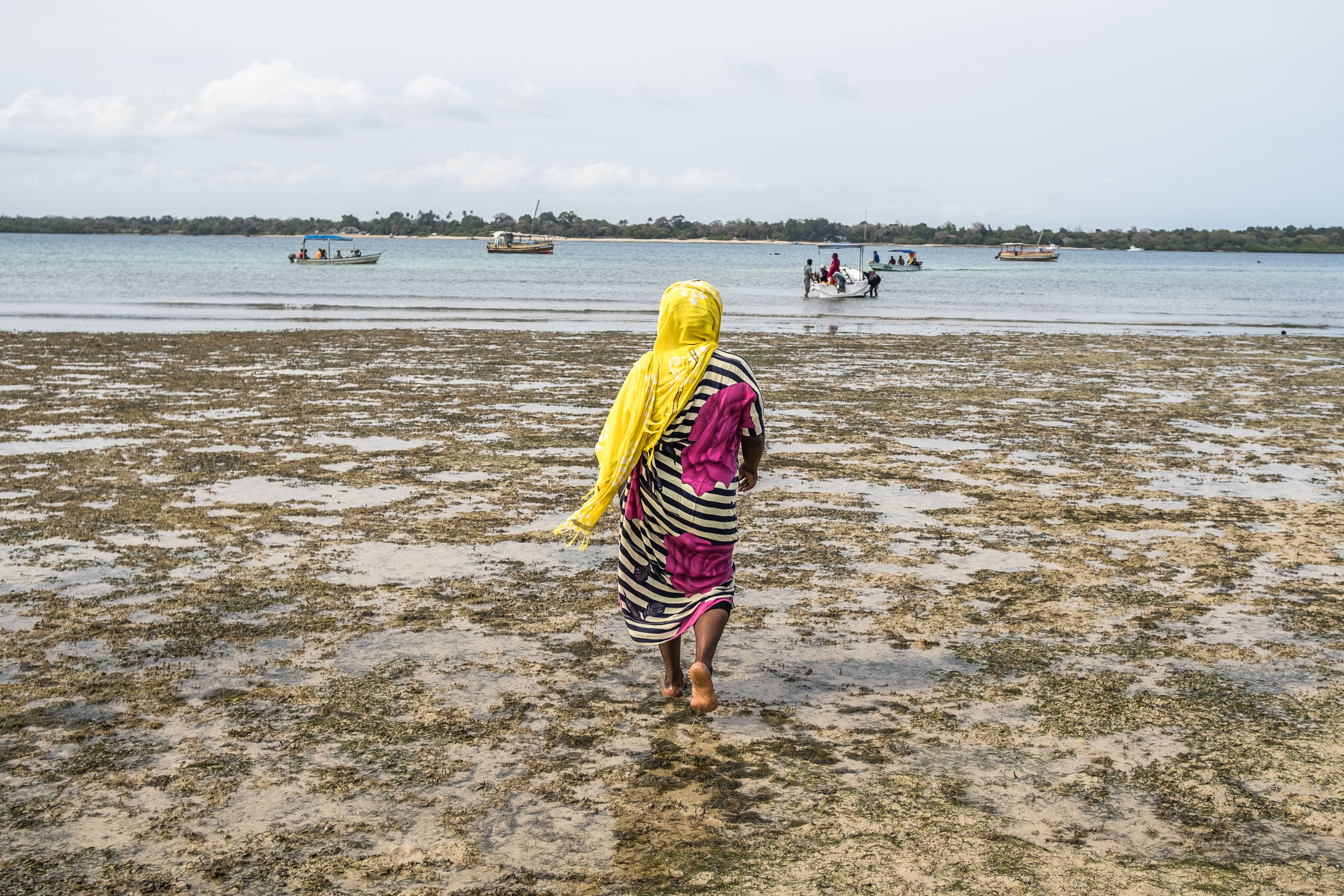 The team have had some notable success in restoring seagrass and helping to train other groups to do the same elsewhere in Kenya and neighbouring Tanzania. However, a fishing port under construction on the mainland nearby could undo much of their good work.

As of 2018, Kenya’s coastline was home to about 320 square kilometres of seagrass, according to a study by researchers from Edinburgh Napier University. This relatively small area – for comparison, Australia has about 83,000 square kilometres – has been shrinking at an accelerating rate. In 2000, it fell by 0.29% and in 2016 by 1.59%, driven largely by fishing pressure, climate change and pollution, the researchers found. 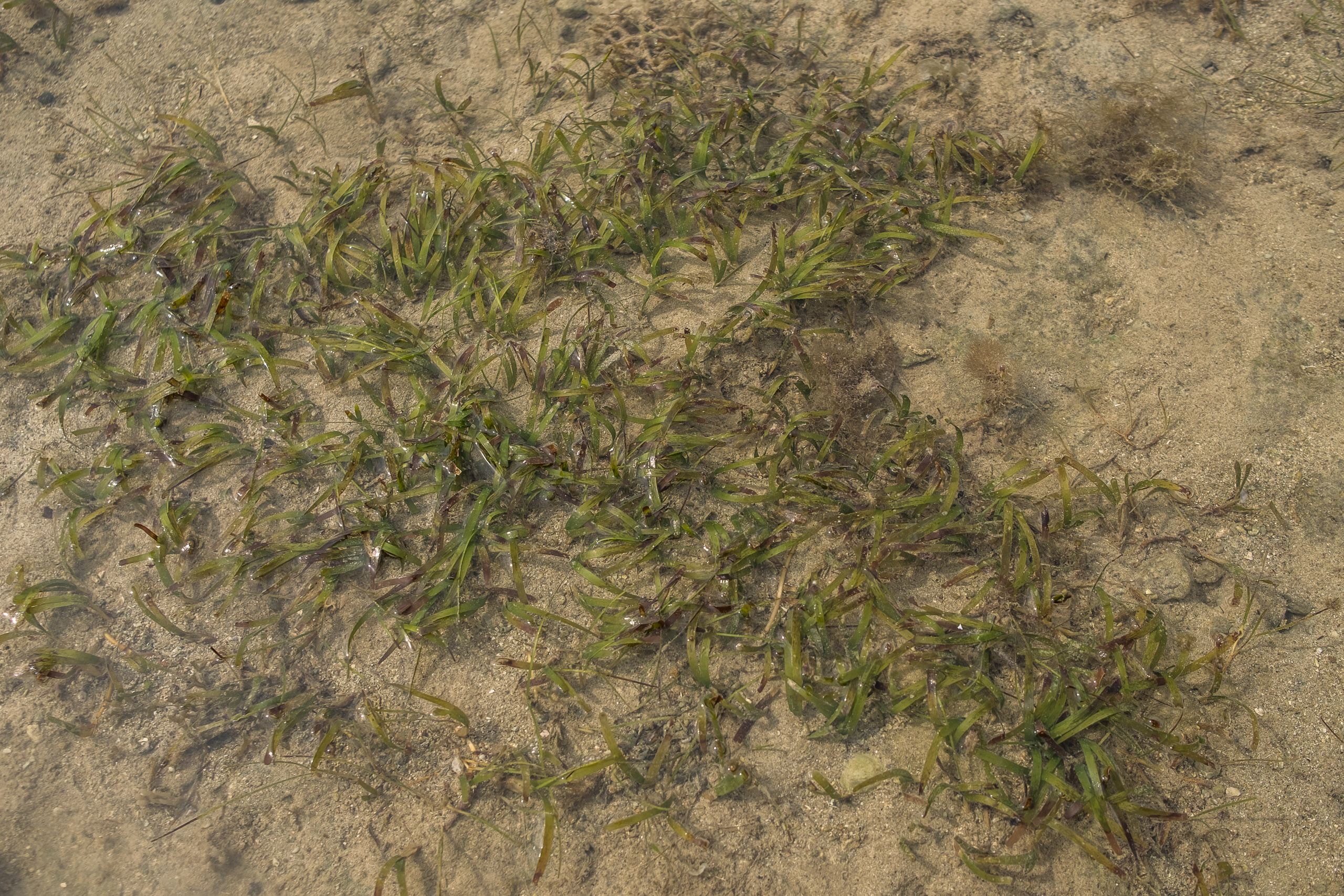 A patch of seagrass on the shores of Wasini Island (Image: Brian Otieno / China Dialogue Ocean)
Which seagrasses are found in Kenya?

Twelve of the world’s 60 species of seagrass are found in Kenya, according to Charles Muthama of the Kenya Marine and Fisheries Research Institute. The two most commonly found are Thalassodendron ciliatum followed by Thalassia hemphrichii.

“The seagrass protects us from strong waves and apart from being a breeding ground for fish, it is also food for marine life and an attraction to humans,” Abdalla explains.

He says the unit has so far restored 2.5 acres (1 hectare) of seagrass and is working on more. They have set no firm targets, however, partly because they are unsure of the impact the Shimoni port may have. This industrial fishing port will be situated on the Kenyan mainland just across from Wasini. Construction began in March 2022 and is expected to take two years. 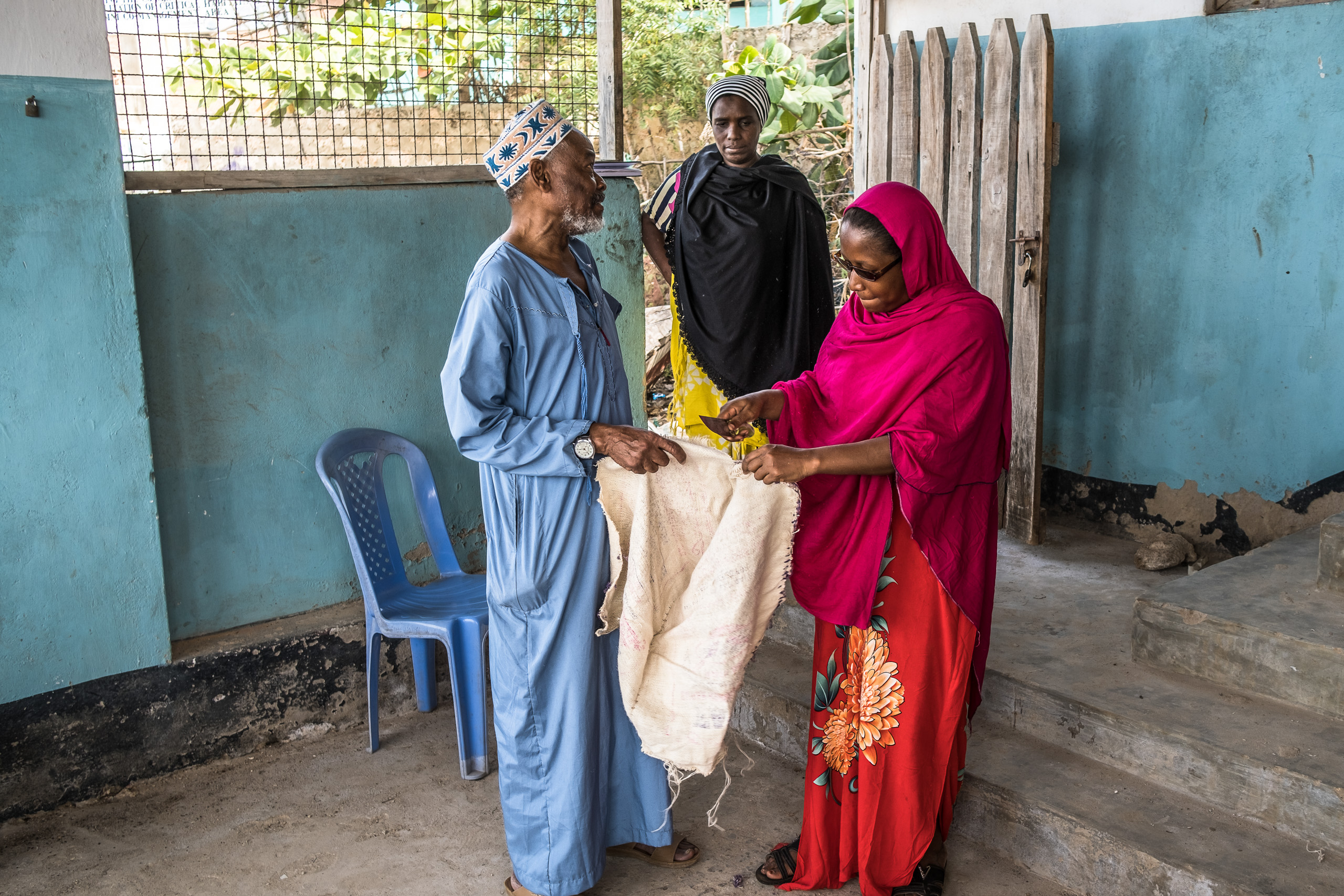 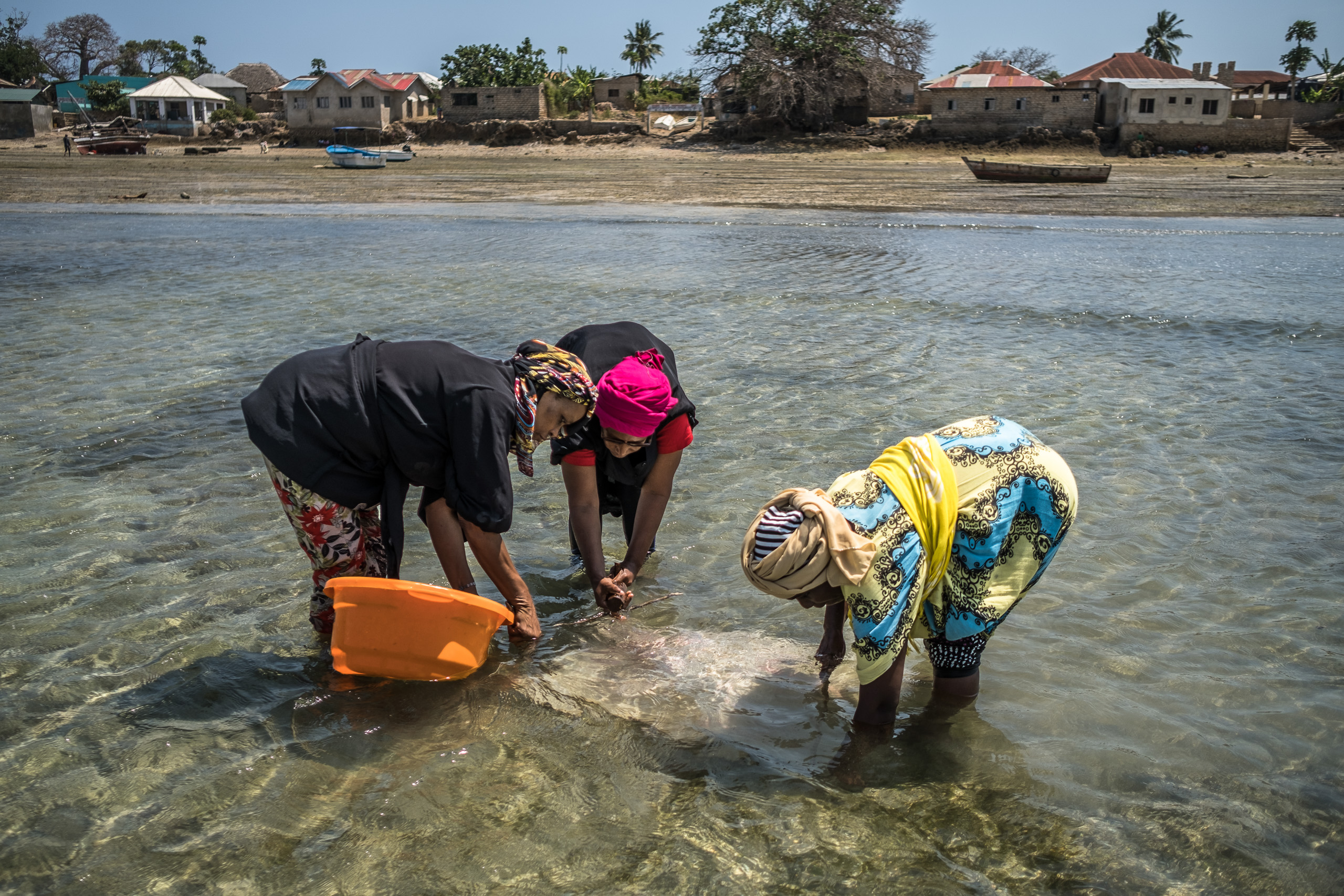 Musa (right) and two other women stake out the sacking they have prepared. They then cut holes in the material and plant seagrass through them. The sacking helps hold the seagrass in place as it takes root. (Image: Brian Otieno / China Dialogue Ocean)

The Wasini Beach Management Unit nurture seedlings in underwater nurseries before transplanting them to the meadow zone using sisal sacks, which have often started life as food sacks. The sacks are staked to the seabed, and then the seagrass is planted in holes cut through the material.

The sacks decompose, explains Abdalla, and the seagrass take root. He says growth rates vary between species, but they can reach maturity in anywhere from two weeks to a few months. Some grow up to one foot tall.

Wasini’s Beach Management Unity (BMU) works alongside several other non-governmental organisations and government bodies to train other BMUs across the region to restore seagrass. There are seven BMUs in Kenya, from Kipini in Lamu County to Vanga in Kwale County, as well as some in neighbouring Tanzania.

Apart from training other BMUs, the Wasini BMU makes efforts to raise awareness among the communities. Charles Muthama, a research scientist at the Kenya Marine and Fisheries Research Institute in Mombasa, explains how important it is that communities appreciate the significance of seagrass. His institute is starting with teaching and trainings in Lamu County on Kenya’s north coast, where they have done mapping work and will soon start restoration.

Muthama believes that once communities learn the importance of seagrass and the restoration methods, they can do the work themselves.

“We have been encouraging the group in Wasini to come up with proposals and look for funding and do the work on their own. They can only call us for data collection or such things,” he tells China Dialogue Ocean. 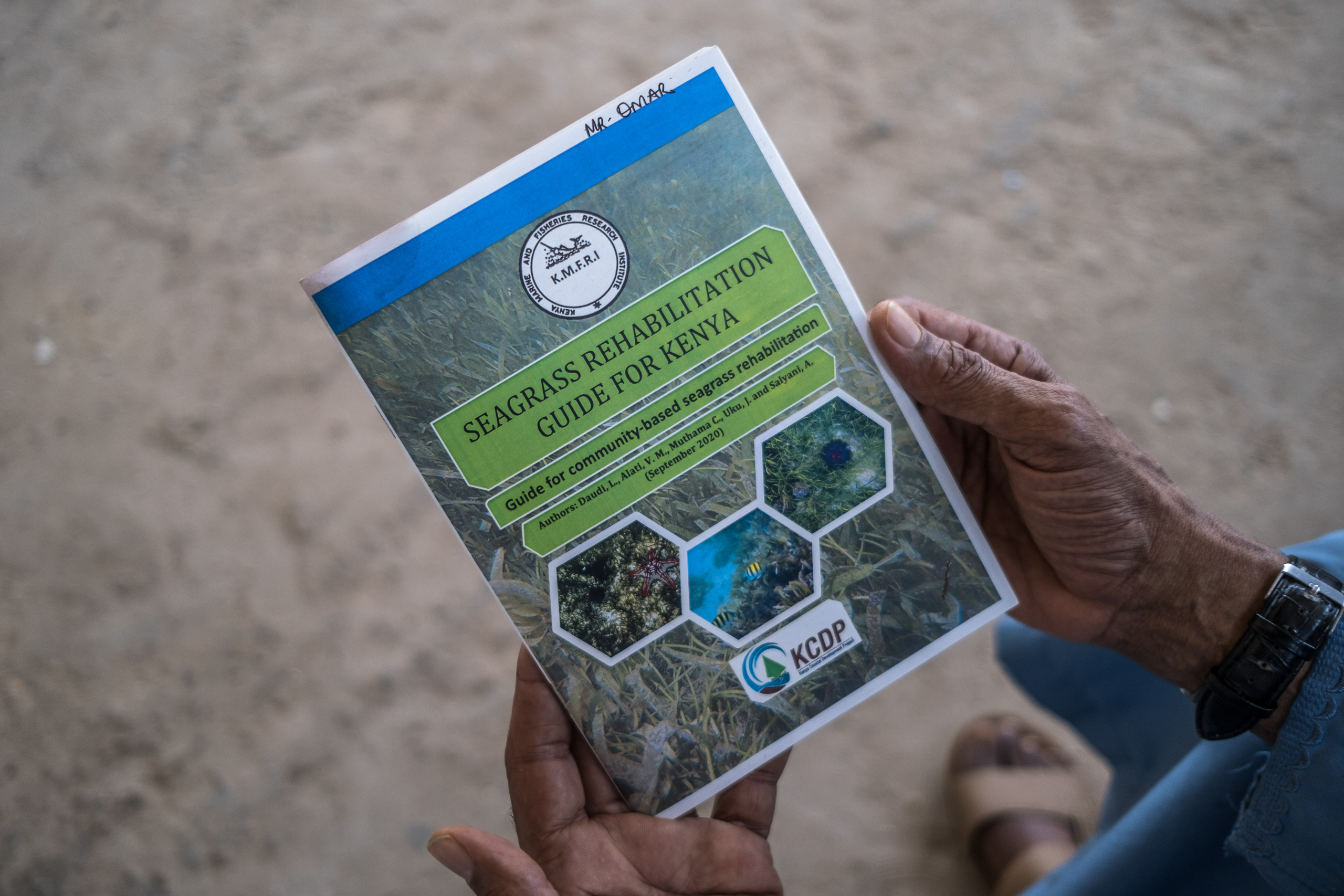 A guide to community-based seagrass rehabilitation by the Kenya Marine and Fisheries Research Institute (KMFRI). The institute is working to raise awareness of the importance of seagrass to coastal ecosystems. (Image: Brian Otieno / China Dialogue Ocean) 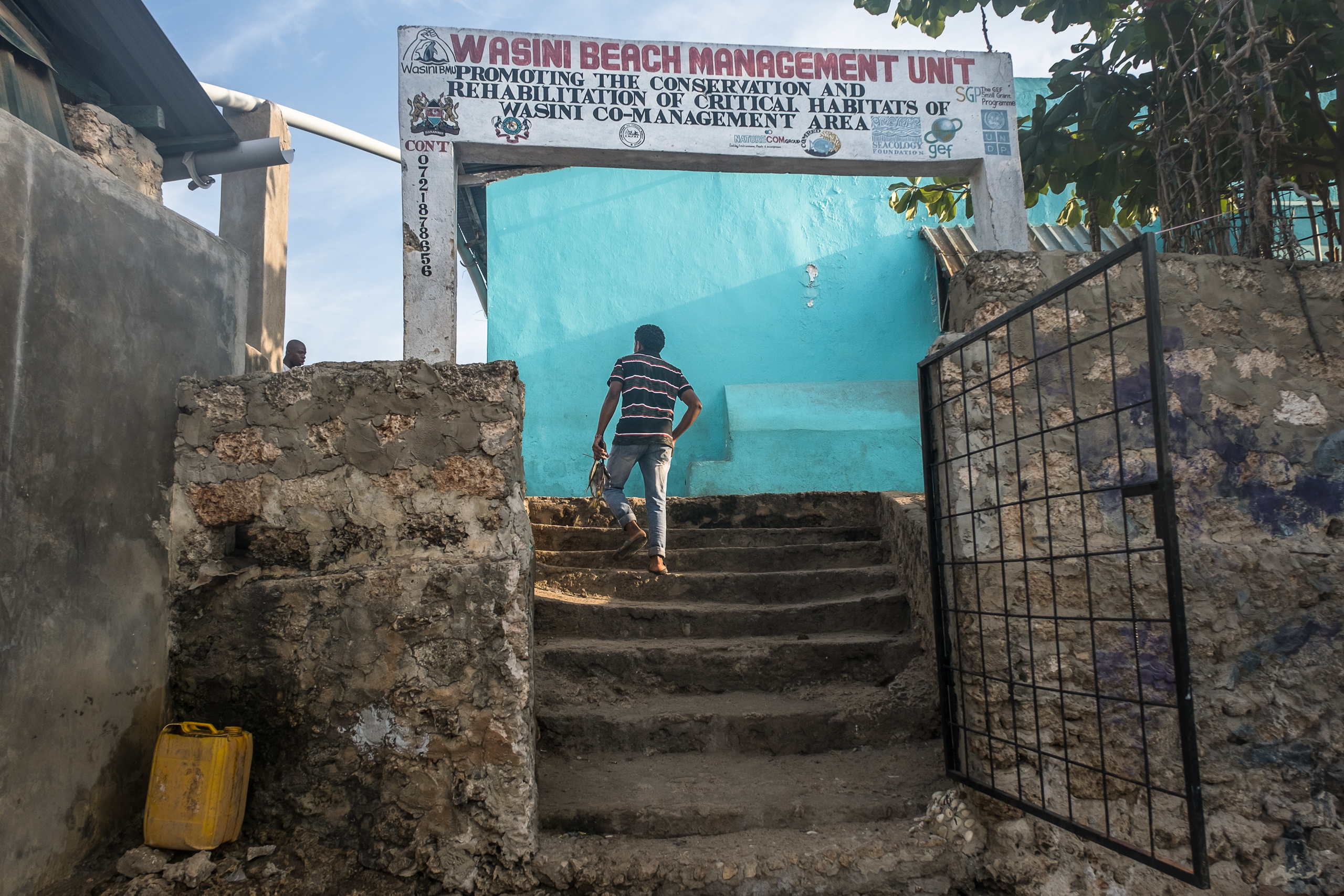 The KMFRI have helped the Wasini community to understand seagrasses, and to restore them effectively (Image: Brian Otieno / China Dialogue Ocean) 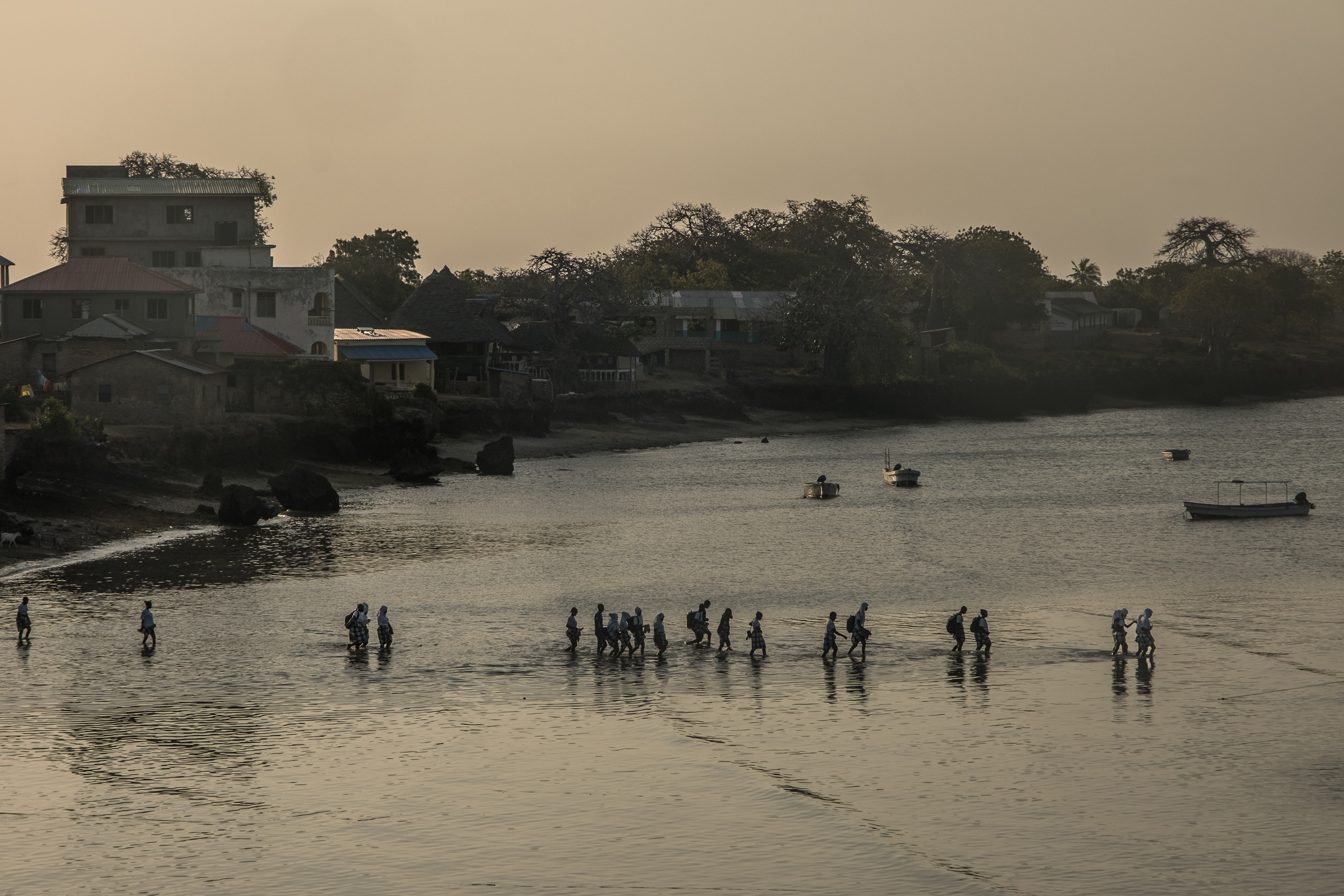 Schoolchildren walk from the island towards a boat bound for the mainland (Image: Brian Otieno / China Dialogue Ocean)

Richard Lilley, chief development officer at Project Seagrass, a charity, agrees with Muthama that as communities realise the importance of seagrass, they will start working to restore and conserve it. “The state of seagrass can be seen as symptomatic of the deteriorating state of our environment more generally,” he says.

Yet even as the communities in Wasini try to restore meadows, a number of national government projects are threatening their efforts and the gains made so far.

Feisal Mohamed, a resident of Wasini, says he is concerned about the Shimoni port.

“It makes no sense. We have been trying our best to restore seagrass and then this? Those fishing boats are not small… the seagrass, the mangroves and the corals that we have worked to restore will be gone,” Mohamed says.

He says that even though port projects must carry out an environmental impact assessment, not much was done for Shimoni.

“They just sent some guys from Kenya Ports Authority who came and said that after the assessment, they would transplant the coral reefs and seagrasses. It is a whole 200 pages of report that does not make sense,” he says. 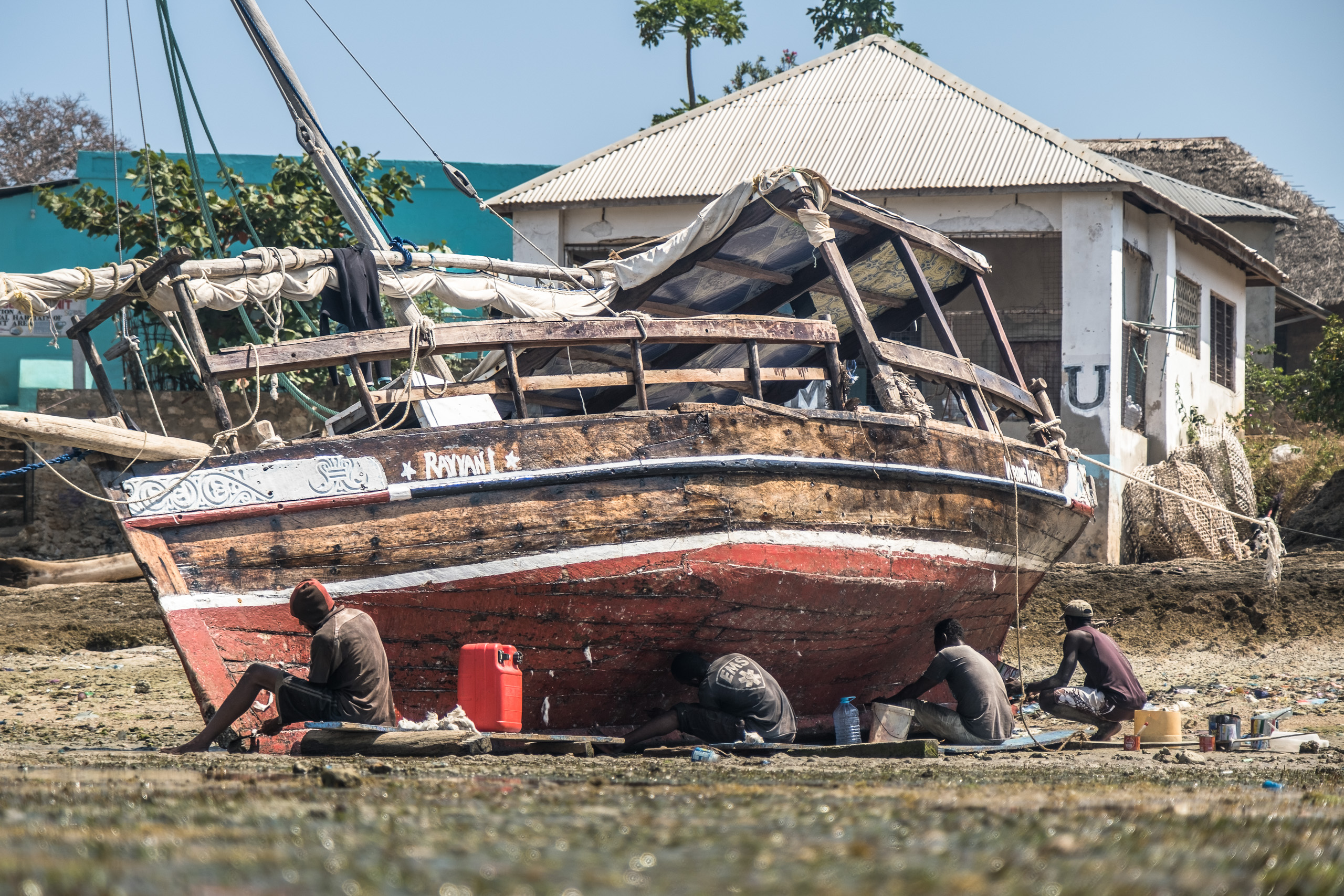 A group of men take advantage of the low tide to work on their traditional fishing boat. The people of Wasini have long relied on the sea to make a living. (Image: Brian Otieno / China Dialogue Ocean) 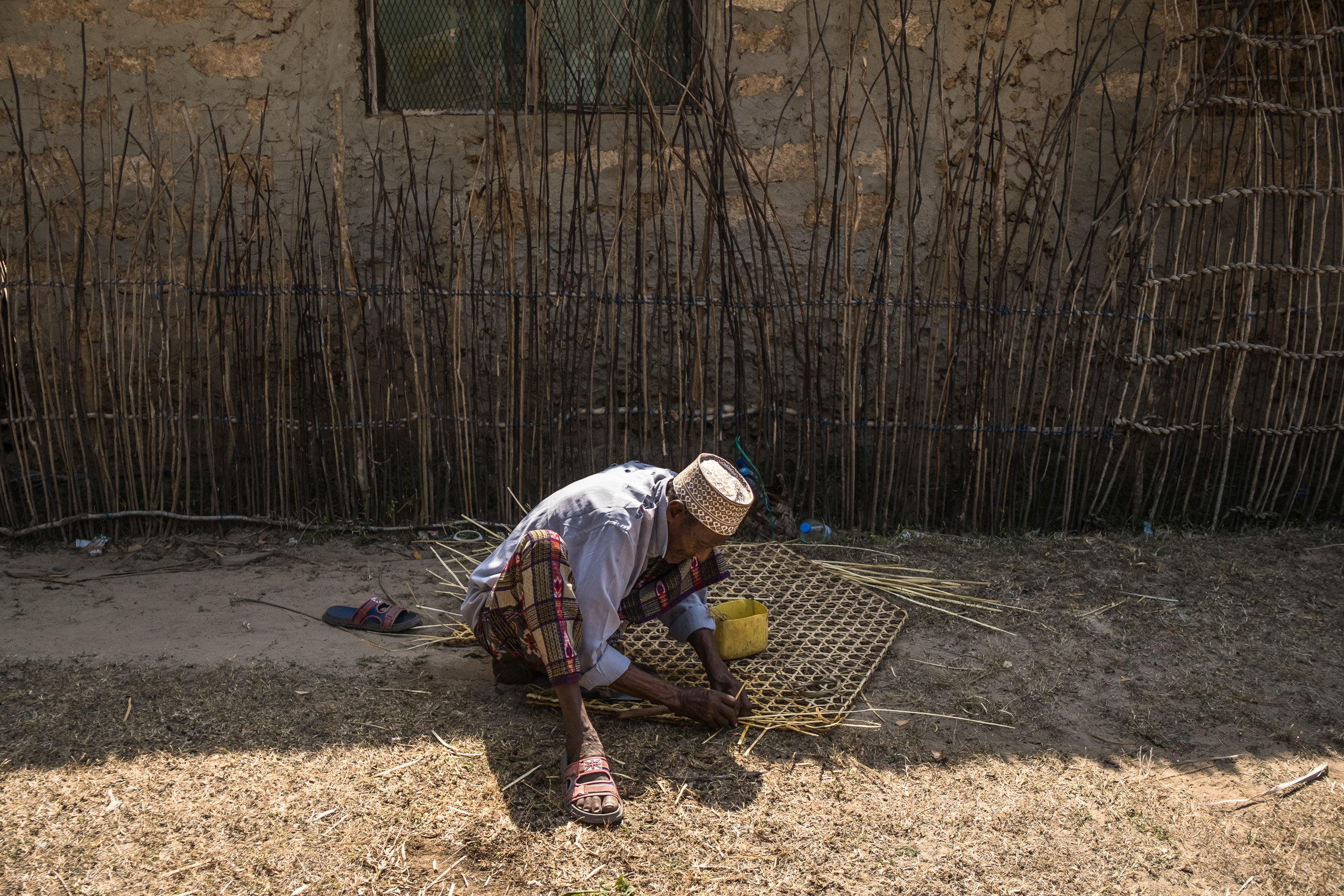 According to Muthama, the main strain on Kenya’s seagrass is overfishing along the coast, causing an imbalance on the marine ecosystems there. He says the fishing methods employed along the coast are unselective. People remove all the fish, leaving sea urchins to graze on the seagrass untroubled by predators.

Seagrass meadows are of fundamental importance to nature and people. According to a 2020 UNEP report, they contribute to community well-being through: food security, by supporting fish production; improved water quality, by filtering; protection of coasts from erosion, storms and floods; and carbon sequestration and storage.

According to Lilley, seagrass meadows are critical habitats for seafood production and global food security. 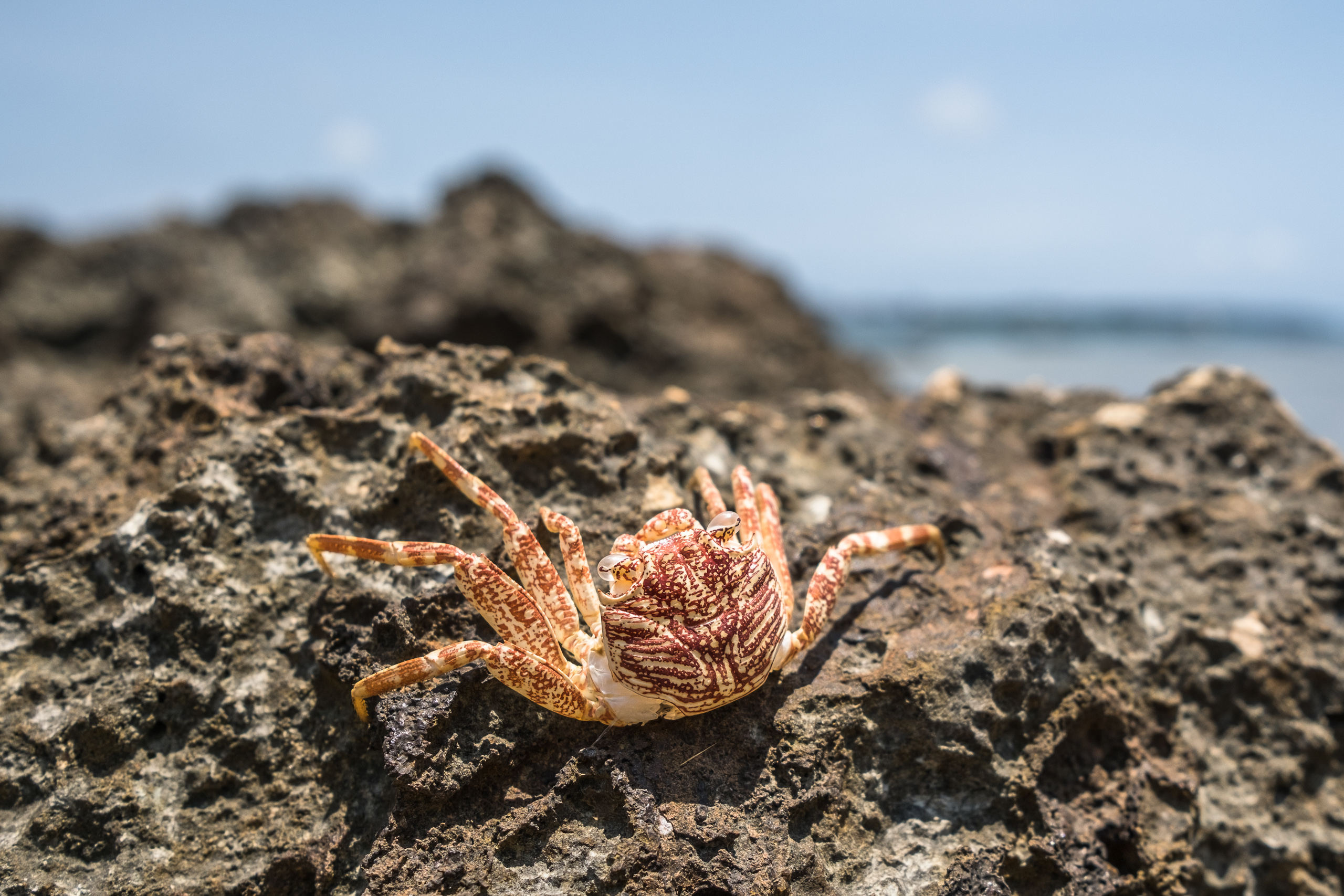 Lilley explains that seagrass meadows provide valuable nursery habitat to over 20% of the world’s largest 25 fisheries. “So both conserving what is left, and restoring what has been lost is vital for global food security,” he says.

Seagrasses are among a number of marine habitats that can help slow global warming. Along with mangroves, salt marshes and kelp forests, these “blue carbon” ecosystems sequester CO2 and can hold more carbon than the lushest jungle.

Research has proven seagrasses to be more powerful in carbon sequestration than terrestrial trees, “if you compare them acre to acre”, Muthama says. But as seagrasses cannot survive alone, it makes environmental sense to restore and protect all other marine ecosystems, he says. 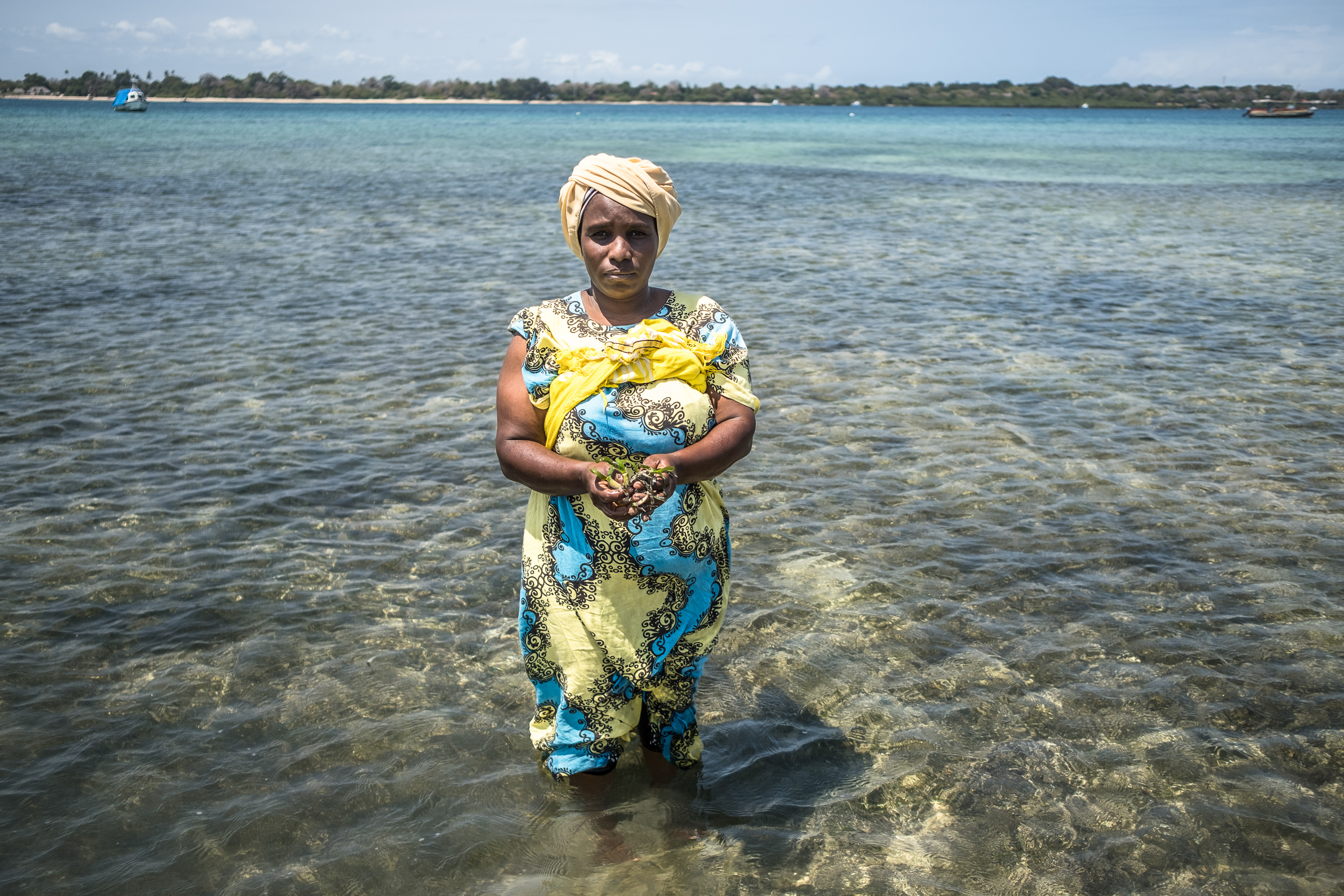 Peter Musembi, a marine biologist based in Mombasa, says communities may be able to benefit from carbon credits that allow companies to offset their carbon emissions by paying communities for protecting ecosystems.

“Communities can also benefit through carbon credits when they restore seagrass, even though they do not understand it yet,” he says. “This is still a new phenomenon, and there is a need for a lot of sensitisation that conserving seagrass can be a source of carbon credit and income.”

Explainer: What is the blue economy?