Representatives of the world’s governments have agreed to regulate global trade in all hammerhead and requiem shark species at a meeting of the Convention on International Trade in Endangered Species of Fauna and Flora (CITES) currently underway in Panama City.

Once in effect, this ruling will mean the majority of the global shark fin trade will be regulated under the CITES agreement, which aims to ensure wildlife trade is traceable and sustainable, and does not lead to species’ extinction.

A proposal, led by Panama, was passed to add the requiem shark family (Carcharhinidae) to the list of species covered by CITES controls, after a vote on 17 November at the CoP19 summit. The requiem shark family comprises 56 species, almost 70% of which are threatened according to the International Union for Conservation of Nature (IUCN), a global network of conservation scientists and experts.

The vote followed a long debate on the floor of the summit, with some governments – led by Japan – arguing that only the most threatened species in the family should be regulated under CITES.

A second proposal to regulate international trade in all hammerhead sharks, the family Sphyrnidae, passed by consensus. The family comprises nine species, of which five are listed as Critically Endangered by the IUCN. 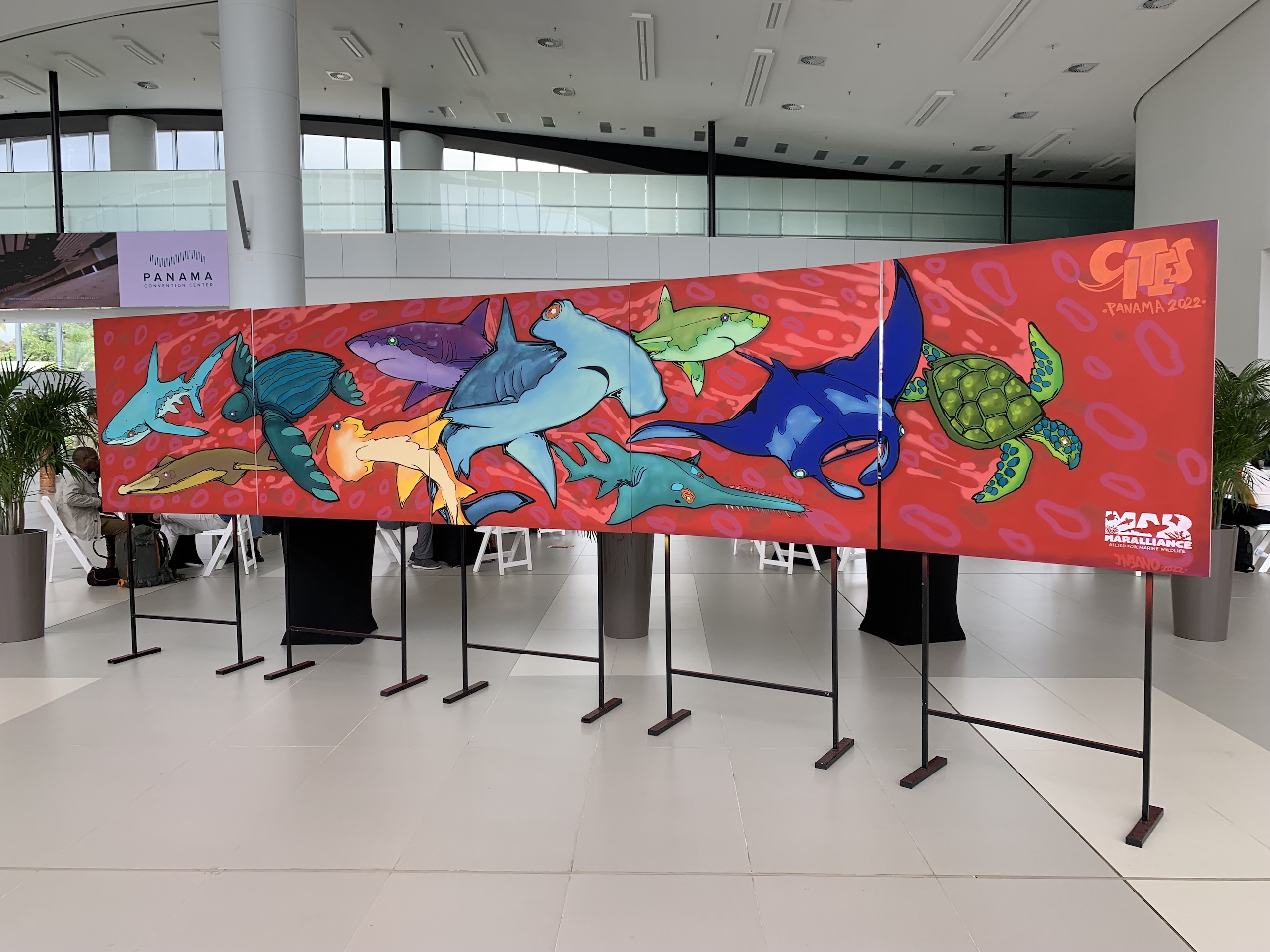 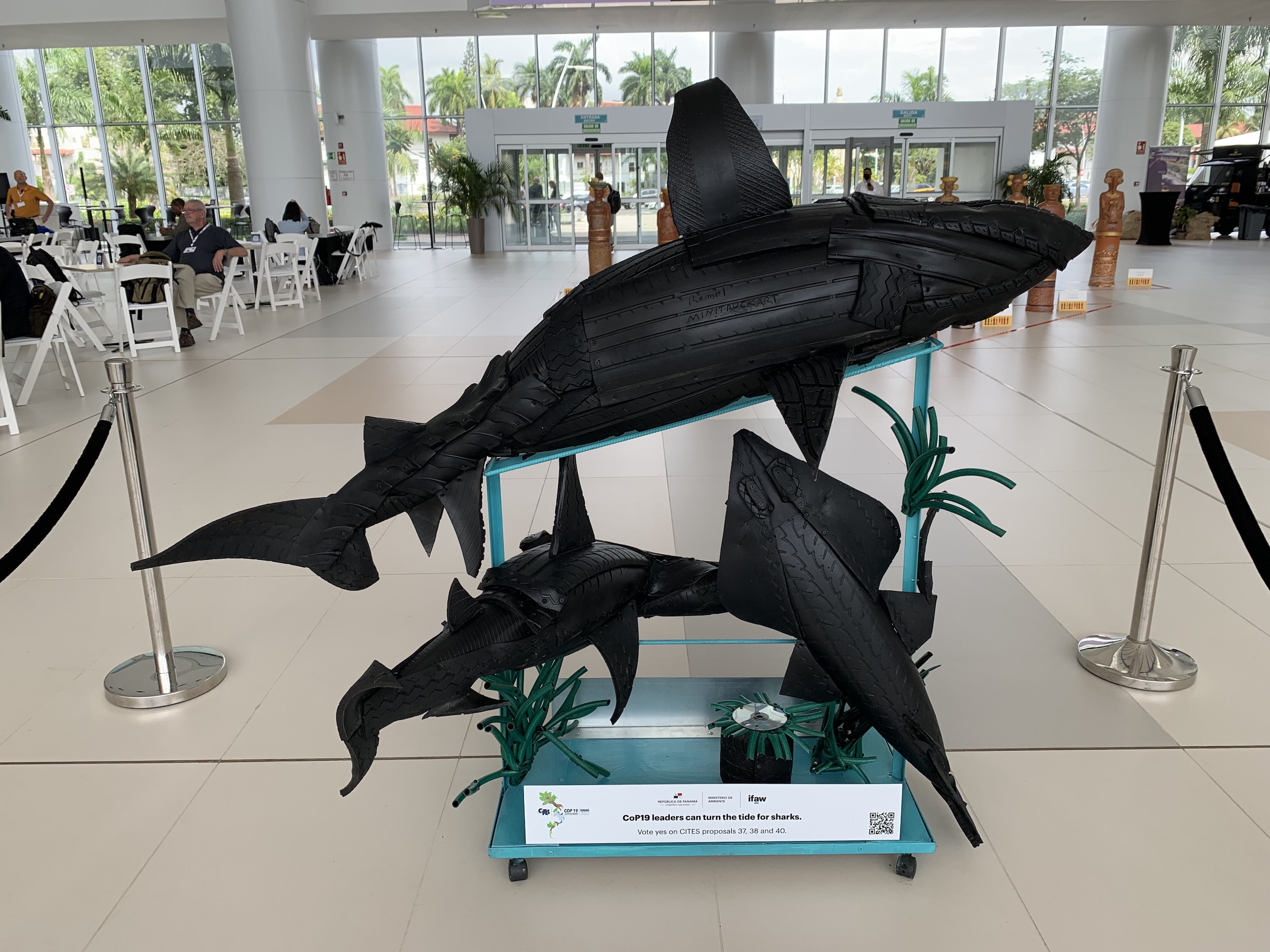 Both families are impacted by the global shark fin trade, with demand centred in East and Southeast Asia, and are also traded domestically and internationally for their meat. Requiem sharks represent up to 85.5% of shark fins in the global trade, while emerging trade in small fins is threatening even smaller hammerhead shark species, Luke Warwick, director of shark and ray conservation at the Wildlife Conservation Society, told China Dialogue Ocean at CITES CoP19. Only around 25% of the shark fin trade is in species currently regulated by CITES, he said.

“These decisions will transform the management of sharks globally by bringing the vast majority of the fin trade under CITES regulations,” Warwick added.

“Today is a historic day for shark conservation,” said Shirley Binder, a senior adviser to Panama’s Ministry of Environment, who introduced the requiem shark proposal at the meeting. “We are extremely happy because the world has woken up to conservation of sharks, the top predators that maintain equilibrium of the ecosystems which our coastal communities need,” added Binder, speaking with China Dialogue Ocean after the vote.

CITES, a global agreement that counts 183 governments plus the EU as members, has regulated international trade in certain species of wild animals and plants since its inception in 1975. It operates via appendices: those on Appendix I, meant for the most threatened species, cannot be legally traded internationally for commercial purposes. Species included on Appendix II may be traded with permits that confirm the specimens were legally and sustainably obtained.

Panama’s proposal to add the entire requiem shark family to Appendix II, which was co-sponsored by more than 40 countries, focused on 19 members of the family which are all endangered or critically endangered. The proposal argued that as different species in the family are very difficult to distinguish in the forms in which they are traded, such as fins and meat, all members of the family need to be regulated under CITES for the regulation to be effective.

Similarly, the proposal to include all hammerhead sharks in Appendix II focused on the endangered bonnethead shark, which appears in the global fin trade, but argued the whole family must be regulated as they are difficult to identify in trade.

Opposition to the listing

While the CITES parties and observers gathered in Panama heard many impassioned interventions from governments supportive of the proposal, some argued that the inclusion of all species in the requiem shark family is unnecessary.

Japan proposed an amendment to include only the 19 most threatened species on Appendix II, and Canada, supporting this, argued that the “lookalike provision” to include all similar-looking species was “not well justified”. Peru suggested an amendment to exclude the blue shark, which was supported by the United States. The blue shark, which is considered by the IUCN to be Near Threatened globally, is likely the most caught and traded shark in the world.

Both Japan’s and Peru’s suggested amendments to reduce the number of species covered were voted on and defeated by significant majorities.

Japan and several other parties made reference to an assessment by the expert advisory panel of the UN Food and Agriculture Organization (FAO), which said that the criteria for including all species in Appendix II on the basis of “lookalikes” were not met, and that only certain species should be considered for inclusion under separate proposals. The FAO panel provides analysis for parties on listing proposals for aquatic species, while the CITES Secretariat and the IUCN provide comment on all proposals. Both the Secretariat and IUCN, as well as many NGO observers, concluded that the criteria for including the whole family were met, and recommended adoption of the proposal.

Panama shared several additional documents with parties at CoP19 to address the FAO panel’s claims that the family did not meet CITES criteria for inclusion on Appendix II.

The proposal to include all hammerhead sharks on Appendix II was conversely met with near universal support. Only Japan voiced opposition, and the proposal was subsequently adopted by consensus.

The inclusion of all requiem and hammerhead sharks on Appendix II is expected to be confirmed at a plenary session at the end of CoP19. If this happens, the new listings will come into effect after 12 months and 180 days, respectively.

“CITES listings are a critical step but only the first step in turning the tide,” Rima Jabado, chair of the IUCN Shark Specialist Group, told China Dialogue Ocean. “If these proposals are adopted in plenary next week, countries will have one year to prepare for implementation. We already have many tools available that will facilitate this but it will be key to work closely with CITES Parties and provide the support needed.

“To see recovery, we need to continue fighting for these species and work on improving fisheries management and ensure that important shark habitats are protected.”