As women fish sellers sit on their stools in the bustling port of Elmina in Ghana, large steel basins between their legs and elegantly knotted turbans on their heads, some stare into the distance, towards a horizon that was once filled with more opportunity than it is now.


From time to time a fish seller bangs loudly on their steel, impatient for the day’s catch to be offloaded from the wooden canoes. It is a noise heard all along Africa’s former Gold Coast, a chorus that bemoans the shortage of fish in seas that have supported past generations of small-scale, traditional fishermen.

If there was once abundance here, it has gone.

West African waters are some of the most overfished in the world, with high levels of illegal and unreported fishing. Foreign-flagged vessels from big fleets, including those of the EU and China, are encroaching on traditional fishing grounds. The socioeconomic and ecological costs for local populations are huge and scientists warn of an imminent collapse in West African fish stocks if measures are not taken to curb overfishing. 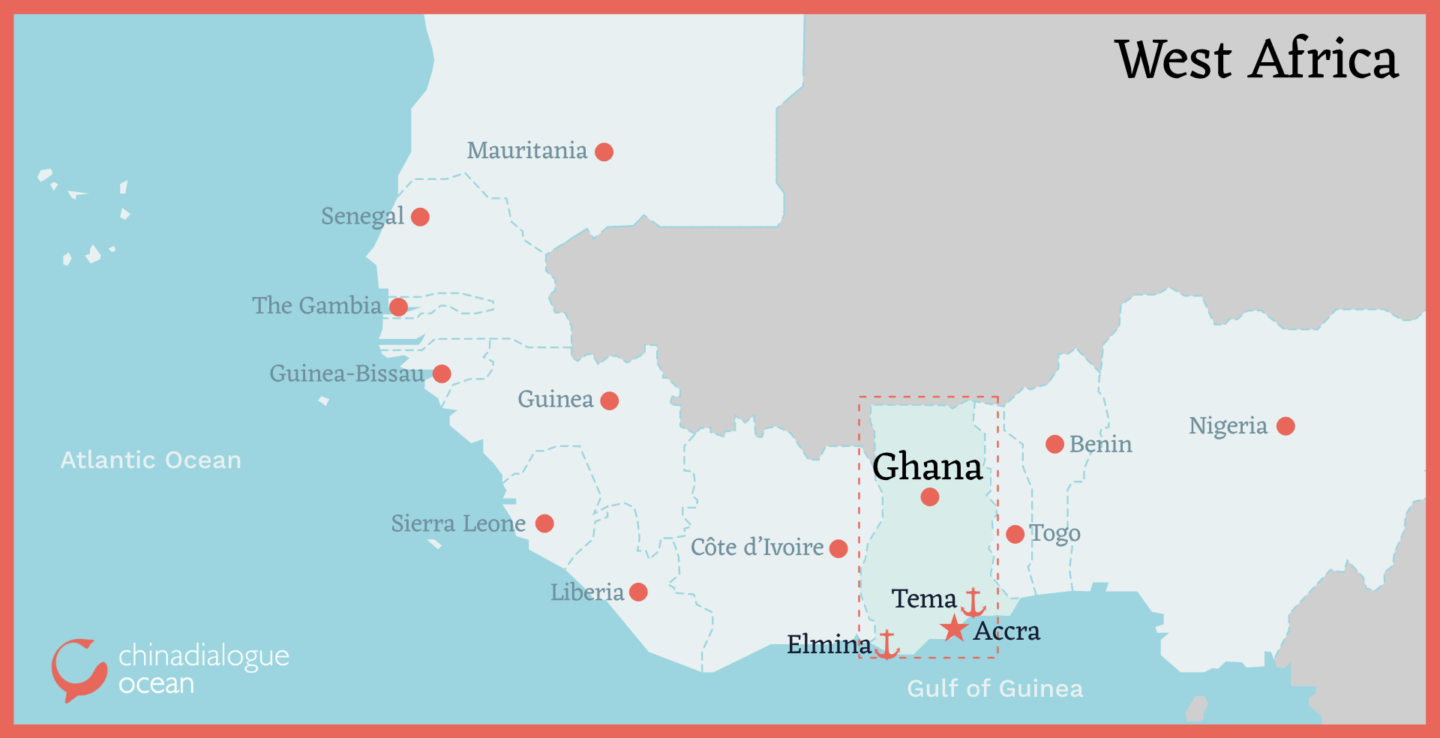 In Ghana, as many as 100 trawlers are targeting the same fish that artisanal fishermen have been catching for generations. But they’re also targeting juvenile fish, meaning populations cannot recover. In other parts of West Africa, EU vessels are frequently entering artisanal zones to illegally catch fish, impacting the livelihoods of coastal fishing communities.

At Elmina port, one woman stands before a large square slab of mixed frozen fish that she has for sale. This is no ordinary artisanal catch: it has been frozen onboard an industrial vessel and “transshipped” (illegally transferred at sea) by organised Ghanaian-owned canoe operators, in a practice known as “saiko”.


The original term was “saite” and dates back to the 1970s when it was used by Japanese fishermen to describe the “bad/rubbish” fish that their trawlers were discarding. But the locals saw the value of the bycatch and insisted it was “saiko”, meaning “good/useful” fish.

Data shows that 23 trawler vessels were sanctioned in 2018 for either saiko or saiko-related offences, including fishing in artisanal fishing zones, fishing and/or dumping juvenile fish.

“Saiko is having a devastating impact on Ghana’s fish stocks, and the over two million people who rely on fisheries for their livelihoods and food security,” says Environmental Justice Foundation (EJF) executive director, Steve Trent.

Once brought onshore, the slabs of frozen fish, which include overfished species like sardinella but also juvenile fish of other species, are transferred elsewhere, with a small percentage being sold to the local population.

There is no doubt that the illicit trade is hugely profitable.

Aboom, a member of the Ghana Industrial Trawlers’ Association at Elmina, said: “In a day, a maximum of 25 motor-powered canoes land saiko fish. A saiko canoe brings back to shore as much as $6,400-worth of fish for only a day’s trip. I can’t disclose how much we get but we make good money.”

These figures are in stark contrast to small-scale fishermen who struggle to cover their fuel and crew costs.

Both the Ghana fisheries minister, Elizabeth Naa Afoley Quaye, and the president of the Industrial Trawlers Association, Sammy Nii Okai Quaye, have recently called for the eradication of saiko.

However, the influence of domestic and foreign industry lobbying is the biggest obstacle to stopping saiko. In 2019, the World Bank highlighted the Ghanaian government’s “weak commitment to reducing the industrial segment’s fishing capacity”. The report stated that the government is “highly influenced by forces within the industrial segment” and raised concerns that foreign-owned vessels being allowed to register in Ghana under beneficial ownership arrangements were not being investigated.

A number of factors allow saiko to continue, and complex foreign beneficial ownership structures have been highlighted as key.

According to the FAO legal definition, beneficial ownership is an opaque system using local “shell” companies that provide cover for vessel owners, allowing them to escape punishment or financial penalties for illegal fishing.

Ghanaian law bans foreign interests from the industrial fishing sector, so companies use “a variety of mechanisms to conceal the true beneficial owner of the vessel,” says Trent.

“This includes setting up hire-purchase agreements with Ghanaian [front] companies, or using other corporate arrangements, such as special purpose vehicles for their operations,” adds Trent. The latter is a subsidiary of a company that is protected from the parent company’s financial risk.

Professor Denis Aheto, a scientist at the fisheries department of the University of Cape Coast, Ghana, explains that “the Chinese own most of the industrial fleets in the country in connivance with Ghanaians. The law categorically rules out any form of joint ownership between foreigners and Ghanaians, but Ghanaians front for the de facto owners, to give the impression that these businesses are Ghanaian-owned”.

EJF’s most recent figures show that more than 95% of vessels with active licences to fish were captained by Chinese nationals.

Agbogah said that Ghanaian subsidiary companies acquire licences directly from the Ministry of Agriculture “through some opaque and phony arrangements”, while the vessels are “manned by Chinese owners”.

Fishing communities are aware of this too: “Nationally, foreigners cannot license a boat, so it is a Ghanaian who is licensing the boat, and they take about 5% or 10%, and the rest goes to the foreign owner,” explains local fishermen Goodman Goodwill.*

Dyhia Belhabib, principal investigator at Ecotrust Canada and one of the world’s leading experts on fish crimes, describes third-party beneficial ownership networks as a global problem – not one confined to Chinese owners or indeed Ghana. She describes the practice as being “typical of criminal networks with shell companies, entangled networks, and opaque management layers”.

This investigation was prompted by a series of saiko-related offences by vessels operating in Ghanaian waters, and questions surrounding their true ownership. In February 2019, the vessel Meng Xin 29 was caught on camera illegally dumping vast amounts of juvenile fish overboard. Then in July, a Ghanaian fishing observer went missing on board the Meng Xin 15. He has not been found.

Further investigation confirmed that all of these vessels are in fact owned by a Chinese company, Dalian Mengxin Ocean Fisheries. There are an additional 30 vessels linked to this company, with at least 17 operating in Ghanaian waters, at least five operating in Sierra Leone under a Chinese flag and the rest undisclosed.

The Chinese government’s Ministry of Agriculture and Rural Affairs public data confirms that Dalian Mengxin Ocean Fisheries is the owner of 35 vessels, and also includes the permit renewal date for the vessels featured in this investigation. The ministry’s 2018 offshore fishing vessel overseas inspection and fishing crew work plan also lists the Ghanaian-flagged vessels featured in this investigation.

References to Dalian Mengxin Ocean Fisheries activities in Ghana and Sierra Leone were also found on at least five Chinese online public platforms including Jobui, China import and export yellow pages, Emis, Yjbys and Liepin. The site Yjbys states that “12 offshore fishing vessels were built in 2012” and “went to the Ghanaian waters of Africa for ocean fishing.” The site Jobui openly references the fact that “the company has more than 30 offshore fishing vessels, all operating in Sierra Leone and Ghana in Africa.”

These public references further demonstrate the link between Dalian Mengxin Ocean Fisheries and their vessels operating in Ghana and Sierra Leone, which are contravening the Ghanaian law that prohibits joint foreign ownership ventures.

Who is Dalian Mengxin Ocean Fisheries?

Along with 100 other selected Chinese companies operating in distant waters, Dalian Mengxin Ocean Fisheries benefits from a special status via a certification scheme which denotes it as an “offshore fishery enterprise of the Ministry of Agriculture”. This gives the company access to subsidies, including for boat building and fuel, as well as tax exemption.

Dalian Mengxin Ocean Fisheries is also known as Dalian Mengxin Yuanyang Fishery, which lists as an associate Dalian Hailufeng Oceanic Fisheries Development, a company that claims on its website to have “considerable influence in African countries”, listing Ghana, Ivory Coast, Cameroon, Angola and Nigeria as countries in which the company has “obtained the fishing permits issued by governments”.

If the saiko business is generating profits – both for Chinese trawler owners and the local Ghanaian operators – the reality for the rest of the fishermen in the town of Elmina is bleak. Many are struggling to make money and pay off debts, and see little hope for an improvement in fish populations.

Forty-year-old Kofi Nkrumah, an artisanal fisherman from Elmina, laments that “there is no business in the sea for me. Things are bad. A fishing expedition costs us US$180-worth of fuel. The cost of food for the crew and others can all total to additional US$150”. Nkrumah indicated that they ply the whole week and only catch what can settle the cost of two days’ fishing.

In comparison, it is estimated that a foreign-owned trawler in Ghanaian waters can land up to 26 tonnes of fish a day, the equivalent of around 400 canoe trips like those undertaken by Nkrumah. 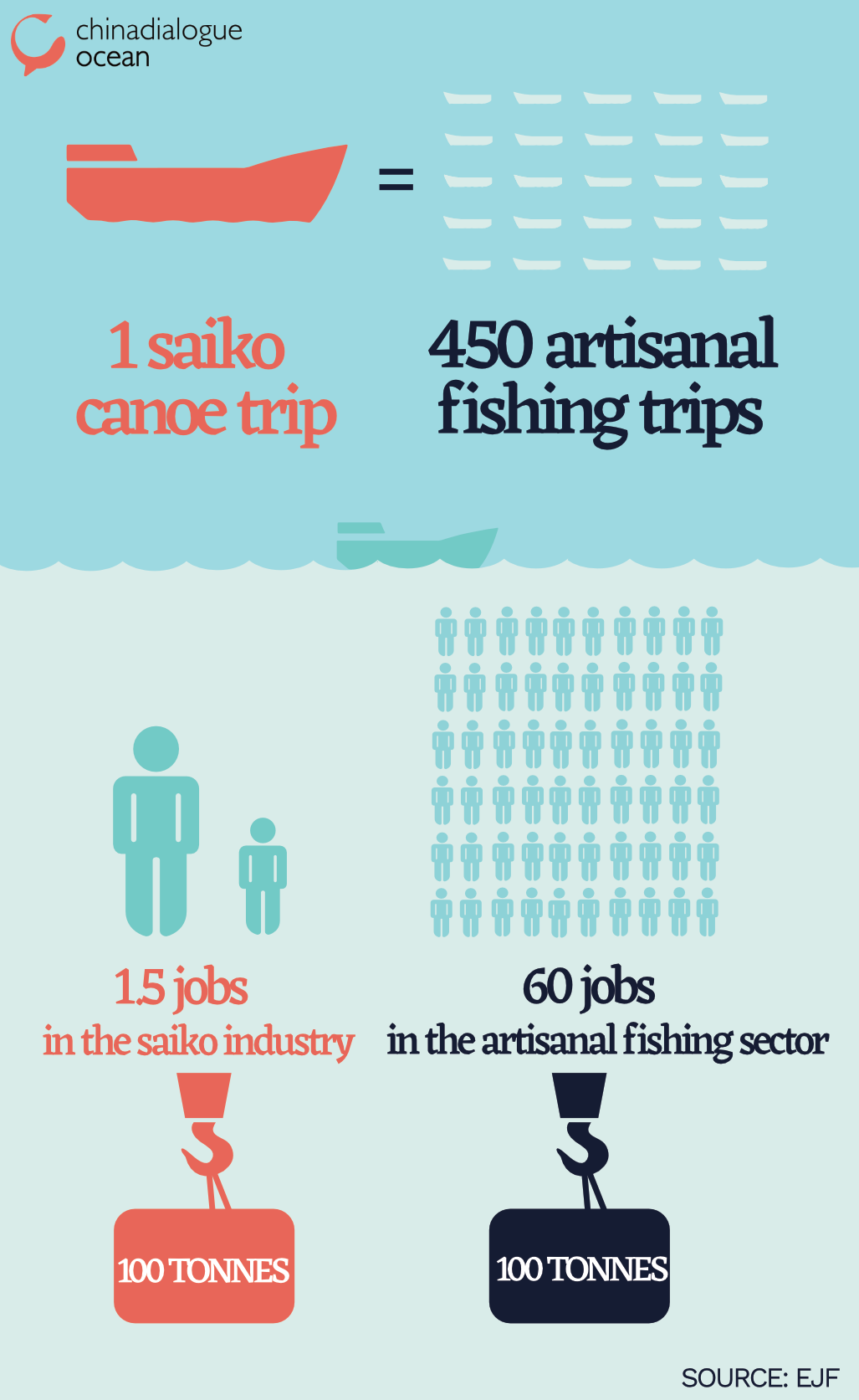 Nkrumah looks at the shore despairingly, his face weathered by the elements and worry about the future of his traditional trade, passed down through generations. Like many other fishermen in Ghana, he is hugely impacted by the saiko business.

The activities of trawlers in Ghana are “financially capacitating fishing crime,” says Belhabib. “[They are] hiding under the rug of local subsidiary practices and disturbing the very cultural fabric of traditional fishing.”

Whatever aspect of the saiko question is considered – its socioeconomic impact on coastal communities, the robustness of domestic Ghanaian law that strictly prohibits it, or the profits made by foreign-owned companies – it is clear to see that against a backdrop of near-impunity, saiko has evolved to become the most destructive fishing practice to hit Ghana’s once abundant seas.

Read part two of this investigation, How Ghana’s weak penalties are letting trawlers off the hook, where we examine evidence of infractions committed by trawlers operating in Ghana and Sierra Leone and ask who is profiting from these types of transnational networks.

*Some names have been changed

Has Indonesia’s ban on the trade in manta ray gills succeeded?