“Illegal fishing off West Africa is one of the most pronounced sites of environmental crime today. It’s well known that external involvement is complex and cuts across sectors,” says Peter Stoett, an expert in transnational environmental crime at Ontario Tech University.

An estimated 26 million tonnes of fish, valued at US$10-23 billion, is caught each year via illegal, unreported and unregulated (IUU) fishing, according to the UN Food and Agriculture Organisation.

Fisheries experts have identified a number of factors which enable vessels to engage in IUU. These include the lack of capacity of developing countries to monitor their waters and ports, frequent changing of vessel country flags and vessel names, the avoidance of penalties due to corruption and/or ineffective penalties and the issue of multi-layered business structures which enable the true owners of vessels to remain anonymous.

Another emerging issue, according to Trygg Mat Tracking, an organisation providing fisheries intelligence, are vessels that are launched in large batches into East and West Africa straight from Chinese shipyards.

“A group of vessels will have a common base name, such as Sheng Hang, Lian Run or Meng Xin, followed on each vessel by a different number 10, 11, 12, 13 etc. None of these markers are permanently embossed on the vessels, they are only painted on and so easily changed – often out of sight at sea,” says Copeland.

The fact that these vessels look so identical “presents a significant vessel identity fraud, fish laundering and document identity fraud risk, and in both East and West Africa we’ve documented numerous cases where this has happened,” he adds.

Part one of our investigation was prompted by high-profile cases of fishery offences committed by some of the Meng Xin vessels in Ghana in 2019. This included the revelation that at least 17 Meng Xin vessels, which are officially registered to nine Ghanaian companies, share the same name base and owner: a Chinese company identified as Dalian Mengxin Ocean Fisheries.

Tracing the ultimate owners of fishing vessels (also referred to legally as beneficial ownership) is a challenging, global issue. Both Interpol and the World Bank highlight that opaque ownership is pervasive within the fisheries sector.

Evidence gathered in part one showed that Meng Xin vessels in Ghana are registering their operations under two different states: China and Ghana. The Meng Xin vessels operating in Ghana are seemingly securing access to benefits available to these two different countries. These benefits can include access to subsidies in one country – as Dalian Mengxin is classified as a Chinese state enterprise – and fisheries access under the other via the local Ghanaian companies which operate the vessels.

This investigation has found that 17 Meng Xin vessels in Ghana appeared in the Chinese Ministry of Agriculture’s public list, with permit issuance dates and licences to fish until 2021, as well as on ministry vessel inspection lists. Elisabeth Druel, lawyer at ClientEarth, said that this implicated China as a beneficial owner of these vessels, even though it is not the flag state.

Dyhia Belhabib, principal fisheries investigator at Ecotrust Canada, and one of the world’s leading experts on fisheries crime, says: “I am not surprised. We have estimated by looking into satellite tracks that vessels spend 40% of their fishing time within Ghanaian prohibited zones.”

Ghanaian law categorically bans joint foreign fishing ventures. This means that a proportion of trawlers operating in Ghana are doing so illegally as joint ownership is common. Ghana’s trawler fleet is estimated to be between 70-100, and nearly all are foreign-owned.

Daniel Owusu, secretary of the National Fisheries Association of Ghana, an umbrella group representing fisheries organisations, including the trawler vessel industry, argues that no laws have been broken because companies managing the trawlers in Ghana are “only owned by Ghanaians”. He cited a sub-section of the country’s 2002 Fisheries Act that permits “bareboat” charters, where a boat can be hired with no crew or provisions as part of the agreement.

Steve Trent, executive director of the NGO Environmental Justice Foundation, disagrees. “Foreign beneficial ownership of industrial trawl vessels is prohibited under Section 47(1) of the 2002 Fisheries Act. This clearly states that the share of industrial trawlers operating under the Ghanaian flag must be beneficially owned wholly by a Ghanaian national or company.”

Owusu said Ghana’s Fisheries Commission, which manages the sector, would look at the conditions under which annual fishing licences were renewed, and consider a clause requiring greater disclosure of beneficial ownership information. “The objective is to examine the agreement carefully to find out if it is working for the benefit of the Ghanaians or if it satisfies the provisions for beneficial ownership,” he said. “This is where we are now in Ghana.”

Data obtained for this investigation reveals the breadth of offences committed by some of the Meng Xin vessels operating in Ghana and owned by Dalian Mengxin, with 80% of these offences having taken place between 2017-2019.

All of the Ghanaian companies featured are registered to PO box addresses. Dyhia Belhabib, principal investigator at Ecotrust Canada working on fish crimes, said it is a common practice for companies to hide vessel beneficial ownership via PO box addresses. “There is no way a major trawl fleet is owned by a local company whose address is a PO box,” she said.

Repeated attempts were made to locate the contact details for these companies to approach them for comment, despite the lack of publicly accessible contact data or websites. 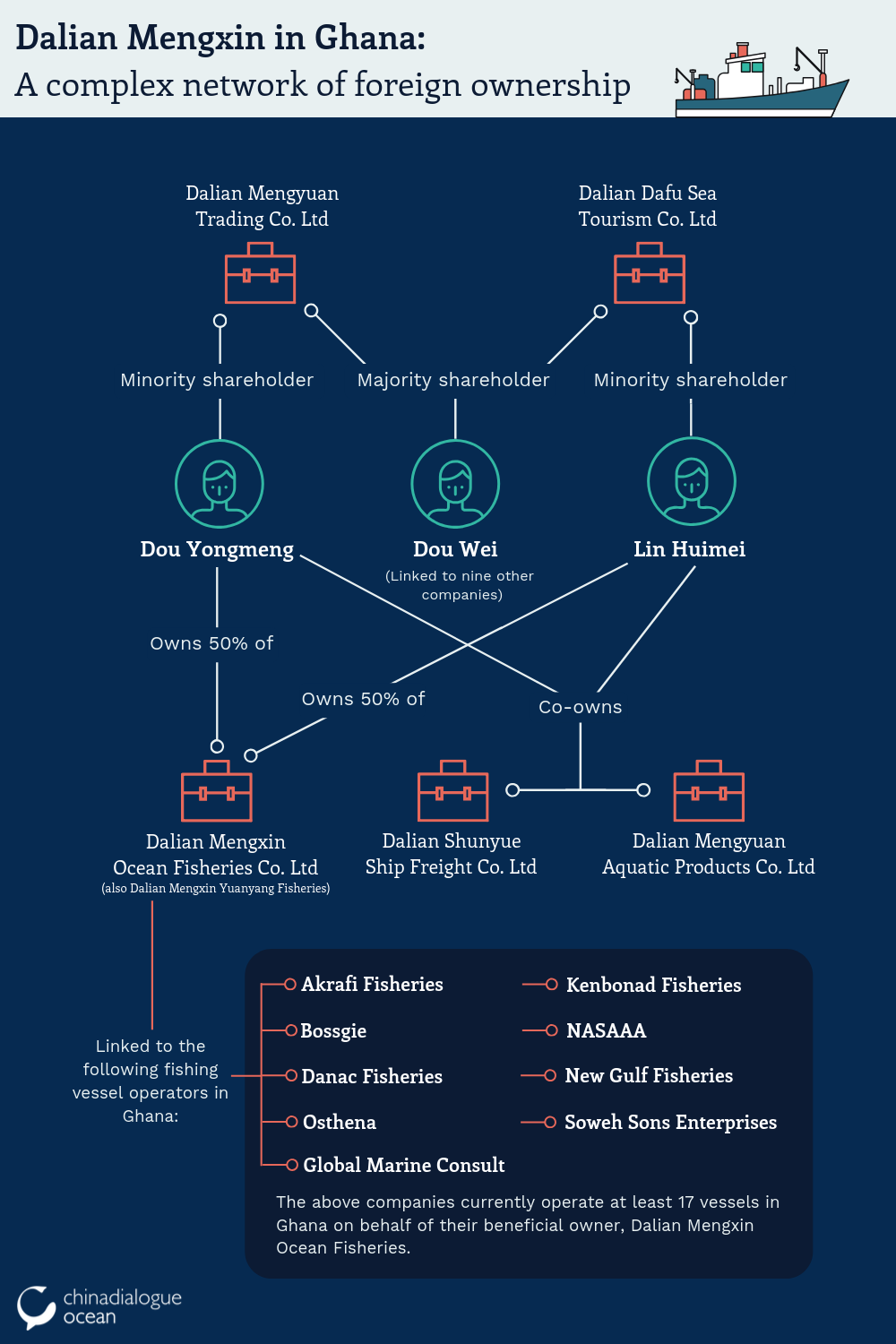 Elizabeth Druel of ClientEarth says that the offences committed by the companies managing the vessels fall under the definition of transnational fisheries crime. “It involves at least two jurisdictions – the one of the flag state, in this case Ghana or Sierra Leone, and the one of the true beneficial owner, which is Chinese.”

She adds that other states could also be involved if illegally caught fisheries products transit through them or are sold there.

Unlike in Ghana, the vessels operating in Sierra Leone all carry the Chinese flag, which makes them the direct responsibility of Dalian Mengxin Ocean Fisheries and China.

Dalian Mengxin’s involvement in Sierra Leone dates to at least 2015. Public records list a joint meeting between the directors of three Chinese companies, including Dalian Mengxin, Zhou Xiaoen and Dong gang Jifu Fishery Co with counsellor Shen Xiaokai from the Economic and Commercial Office of the Embassy of Sierra Leone. The meeting discussed how “both parties [can] better participate in the local fishery. Resources development and exchange views”.

In 2012, Chinese companies Donggang Jifu and Dalian Mengxin Ocean Fisheries were granted a certificate to fish in distant waters as an “offshore fishery enterprise of the Chinese Ministry of Agriculture”.

According to a key 2013 research paper by Tabitha Mallory at the Johns Hopkins University School of Advanced International Studies on China’s distant water fishing industry, there was a deliberate policy adopted to fish within the territorial waters of other countries that set targets for boats, catches and value.

Kofi Agbogah, director of the Ghanaian fisheries and coastal governance NGO, Hen Mpoano, says that all trawlers must be Ghanaian-owned and Ghanaian owners must demonstrate financial capacity to own such vessels.

“Ghana’s amended Companies Act seeks to identify beneficial owners in a number of sectors, including mining. The Ghanaian Fisheries Act does not mention beneficial ownership but it is an emerging issue in the fisheries and hopefully the revised fisheries act will address it,” he said.

But combatting transnational fisheries crime “poses multiple law enforcement challenges”, according to a recent study by the organisation Safety4Sea, which highlights investigating ownership and control of fishing vessels.

“What is needed is the immediate, effective and transparent enforcement of the law,” says EJF’s Steve Trent.

A leading fisheries academic, Rashid Sumaila, director of the Fisheries Economics Research Unit at the University of British Columbia, says: “If we try to benefit from this illegal system then we become accomplices because part of our population is benefiting from it. When there is an illegal system, the best thing Ghana can do is to take it down.”

Belhabib says: “Denial by authorities of issues related to beneficial ownership is common, not because of the lack of political will but because of what could be uncovered by lifting the rock. The huge implications would require changing the regulations and the basic laws in the country.”