Can finance contribute to seafood sustainability? This is an increasingly relevant question given the projected growth of seafood demand and the magnitude of social and environmental issues associated with its production.

Since the 1960s, aquaculture has been the world’s fastest-growing food sector. Rates of fish consumption have been increasing twice as rapidly as population growth, and fish has become one of the most traded food commodities.

Today, more than 90% of the world’s fisheries are either overexploited or fully exploited, and the sector is plagued with unsustainable practices, ranging from illegal fishing and habitat destruction to overuse of antibiotics and forced labour.

Making sure that seafood is both socially and environmentally sustainable has therefore become a key concern for governments, academics and civil society organisations.

In a recent article published in the journal Science Advances, my colleagues and I explored what role finance could play in promoting a sustainable seafood industry and where leverage points may lie to redirect capital towards better practices.

We found the two most promising levers to be introducing sustainability criteria into both bank loan agreements and stock exchange listing rules. Whereas shareholder activism is a less powerful force than might be expected.

While numerous green bonds and other impact investment tools have emerged in recent years, they represent less than 1% of global financial flows. The Principles for Responsible Banking, launched in September 2019, show that the financial sector is waking up to its role in steering businesses towards sustainability. But putting the six principles into practice remains a challenge.

As pressures on the ocean mount, what is missing are norms and regulations that can redirect mainstream finance. Green bonds and green finance initiatives are good for starters but what we really need is a green financial system where sustainability criteria are systematically integrated into traditional financial services. 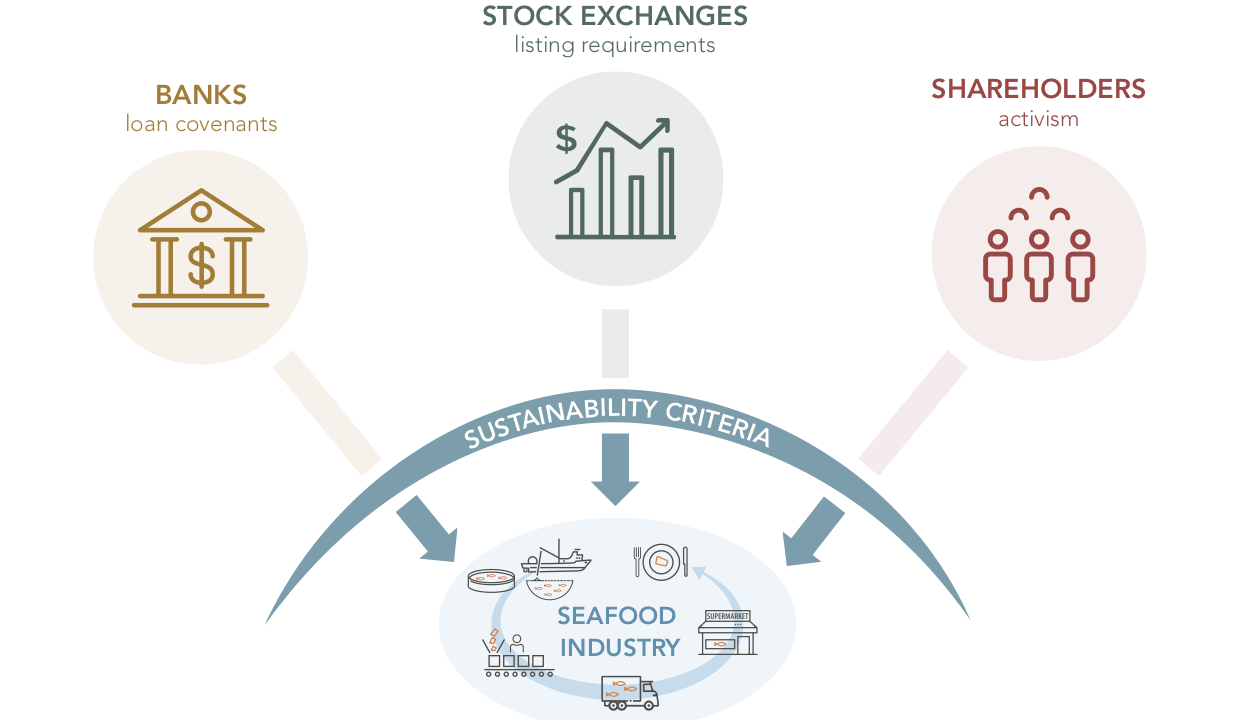 The power of banks

Bank loans are a main way seafood companies finance their operations. Loans come with covenants – agreements between the bank and the borrower stipulating what the borrower can or cannot do.

By incorporating sustainability criteria into loan covenants and binding companies to sustainable practices, banks could play a prominent role in accelerating transformation towards better practices, not just in seafood but across all ocean-based (and arguably other soft commodity) industries.

For example, in May 2019 the agriculture giant Louis Dreyfus Company agreed with its lenders a US$750 million loan for which the interest rate is linked to the company’s sustainability performance, as measured by a reduction in its carbon dioxide emissions, electricity consumption, water usage and solid waste sent to landfill. If the sustainability rating goes up, the interest goes down, and vice versa.

Likewise, Rabobank recently arranged a US$100 million “green and social” loan with Chilean company AgroSuper, the country’s leading salmon company and the second-largest salmon producer in the world. The loan agreement contains several environmental and social conditions that AgroSuper must comply with, such as a commitment to reduce antibiotic use and increase the number of eco-certifications.

The rapid growth of sustainability linked loans proves this can be done, but such criteria and incentives need to become the norm rather than the exception.

To open its ownership to the public, a firm has to get listed on a stock exchange. Companies do so to access capital, gain exposure to broader markets and enhance their brand reputation. This creates an opportunity to scrutinise firms and take sustainability into consideration.

In 2014, for instance, the company China Tuna filed for an initial public offering (IPO) to the Hong Kong Stock Exchange. As part of their risk analysis, the firm indicated that vessels under the Chinese flag had year on year exceeded the catch limits allocated to China but that noncompliance penalties were either non-existent or not upheld. In particular, it mentioned that because the Chinese government had not set any quotas with respect to individual fishing companies or vessels, there was no risk of them being held responsible.

Greenpeace filed a complaint saying that China Tuna used outdated data and overlooked environmental risks. They also reached out to China’s Bureau of Fisheries, which strongly condemned the company’s actions as “gravely misleading investors and the international community”, and to Deutsche Bank – the sole sponsor of the IPO – which declined to comment and thereafter suffered reputational damages.

More stringent sustainability criteria in the listing rules of just a few stock exchanges could therefore have big effects on the seafood industry.

Once a company gets listed, the percentage of stock ownership determines the share of voting rights and the extent to which any one investor can affect corporate decisions. Shareholder activism is the third financial lever of influence we investigated by analysing more than 3,000 shareholders and 160 seafood firms.

Even though it is often promoted as an important way to affect company policies, we found its influence may have limitations in the seafood sector. The majority of large fishing and aquaculture firms are privately owned, and in the publicly listed ones no single investor has substantial shares across many different companies. In addition, large shareholders are mainly individuals or nonfinancial companies.

Identifying leverage points is one thing. Implementing them is quite another. In an epoch when considerable efforts and technologies are deployed to track fishing vessels in near real time, following the money is no less important and deserves increased attention from both scholars and policymakers.

Sustainability screening and industry-specific considerations should become the norm for investments, in the same way as financial auditing currently is. Pressure from governments, civil society organizations and the general public will be important to improve awareness and drive such regulatory changes.

Will finance become a major force in promoting a transformation towards ocean sustainability? The jury is still out, but levers have been identified and now await action.