Human demands on the ocean are growing more intense and more varied. Scientists say that could lead to unpredictable consequences including military conflict and economic and ecological collapses.

A multitude of interest groups is laying claim to the resources of the ocean, from exploring the seabed for minerals, to installing wind turbines, dispatching cruise ships and laying submarine cables. While some claimants can work alongside each other – and there may even be synergies – others are destined to clash, says a team from the Stockholm Resilience Centre in Sweden.

The scientists have dubbed this rush the “blue acceleration”. They say that regulation is struggling to keep up with the explosion of activity which has surged from small beginnings just 30 years ago.

Jean-Baptiste Jouffray, a researcher in sustainability science, led the work, examining 18 different ocean demands and finding that many have grown exponentially. The findings were published last month in the journal One Earth.

Human demands on the oceans are increasing 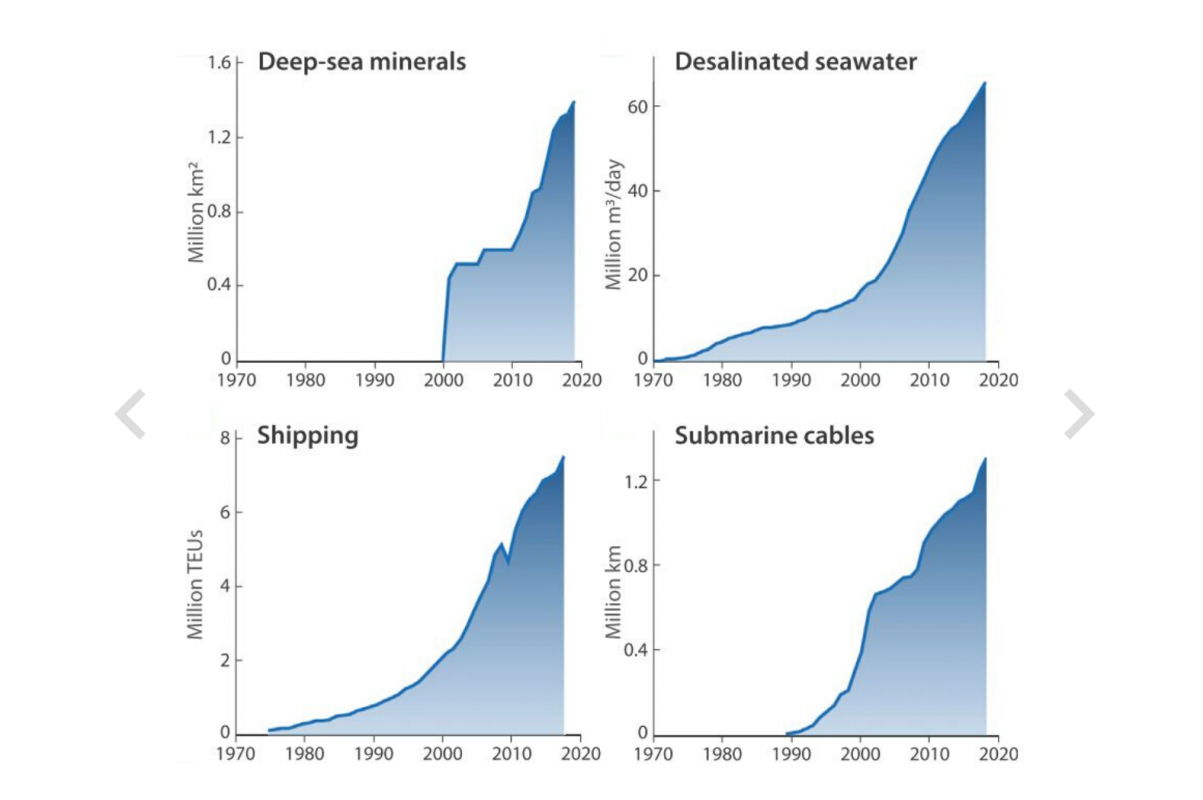 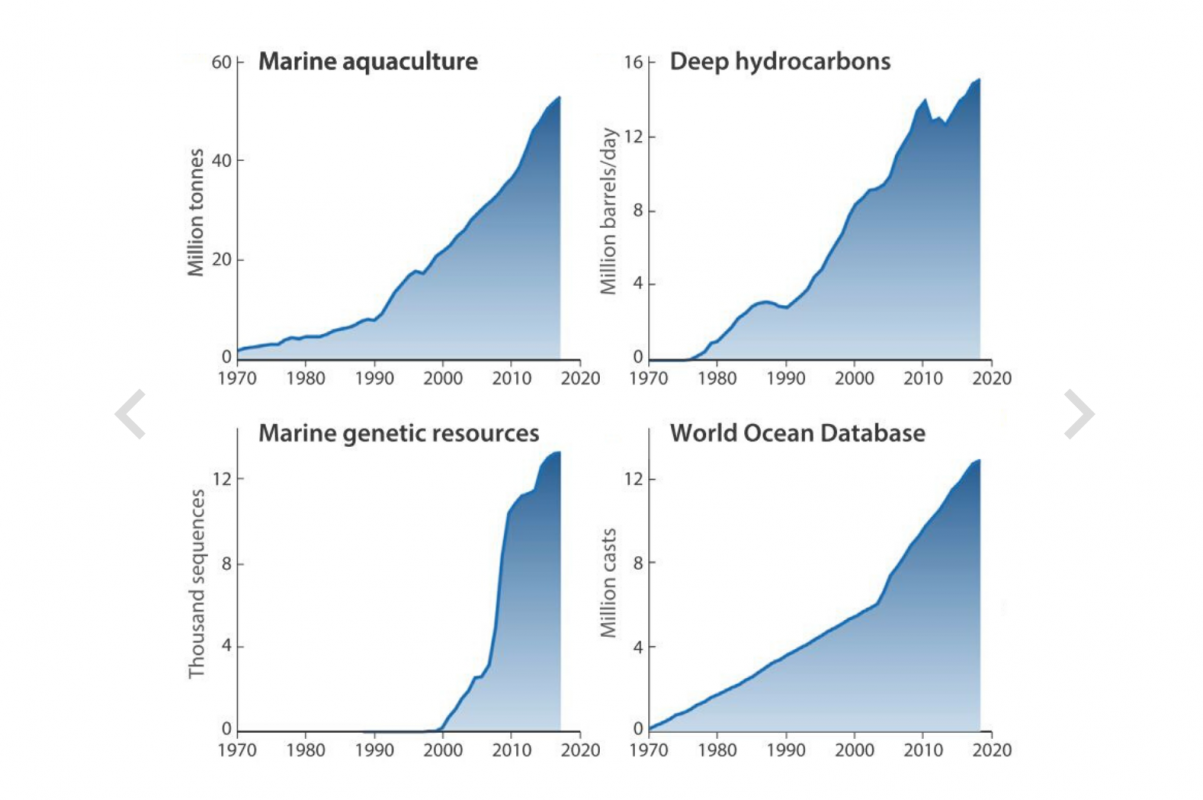 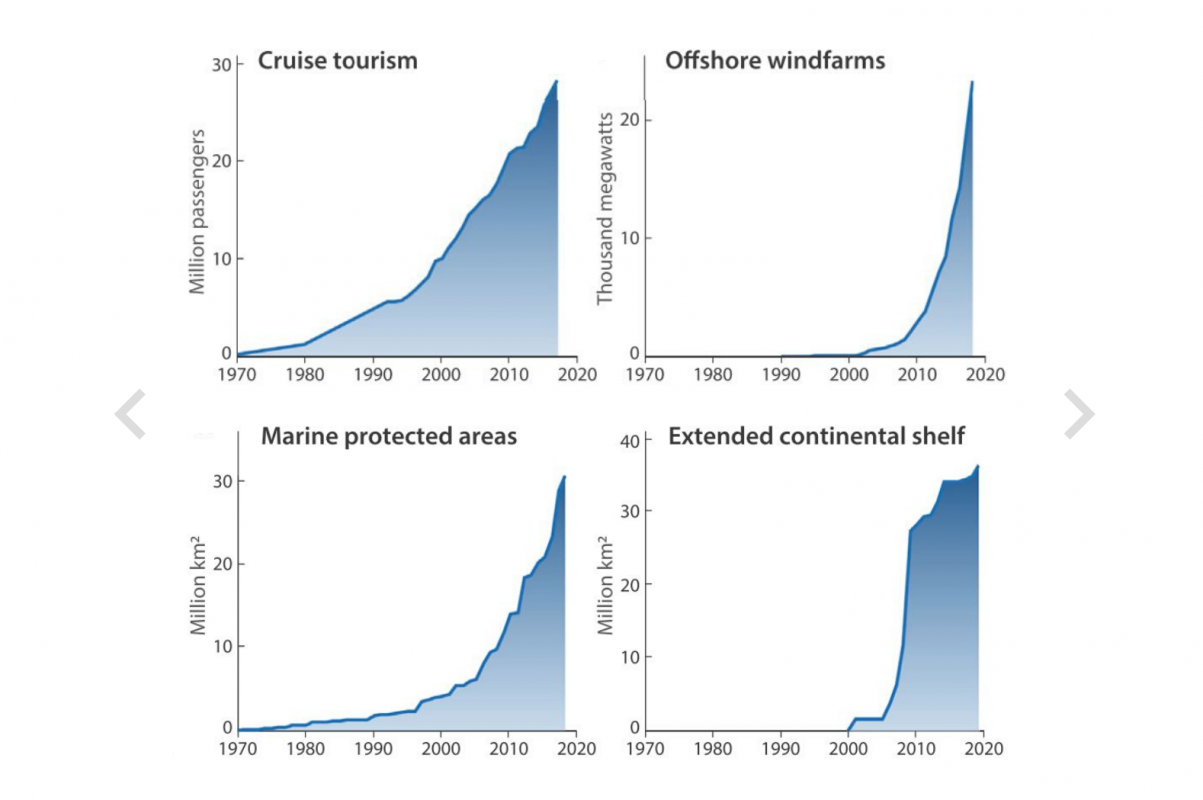 Rising demand for fresh drinking and irrigation water, for example, means there are now 16,000 desalination plants worldwide, which transform 65 million cubic metres of seawater per day, with rapid growth predicted for floating plants. They suck in and kill small marine life and discharge warm, highly salty water that can disrupt coastal ecosystems.

Meanwhile, there are more than 1.3 million km of undersea telecommunications cables and more than 100,000km of seabed pipelines carrying gas, oil, water or sewage. These are innocuous unless they leak after damage from anchors or storms, but they are incompatible with some other seabed activities, such as dredging for sand, said Jouffray.

Demand for fish – wild and farmed – is soaring worldwide, and is projected to reach 154 million tons by 2030. There is also the US$385 billion nutraceutical market – which, for example, exploits the small crustacean, krill, for omega-3 fatty acids. Millions of marine organisms are used each year for home decorations, jewellery and aquaria. And bioprospecting for ingredients for medicines, cosmetics or other chemicals, is also increasing, said Jouffray.

All these activities compete with the 9,000 offshore oil and gas platforms worldwide and the exploration of the seabed for metal ores: more than 1.4 million square kilometres of international waters have been parcelled out in exploration contracts, with Chinese companies holding more mining claims in the high seas that lie beyond national jurisdiction than any other nation.

Mineral deposits in the global ocean

Sailing on the ocean’s surface are the world’s 94,000 commercial shipping vessels and 26 million annual cruise ship passengers. In the future, they may need to navigate around massive marine geoengineering projects designed to siphon CO2 into sub-sea chambers in an attempt to tackle climate change.

“There are all these hopes that the ocean will deliver as the engine of future human development,” Jouffray said.

“When you see all the lines on those graphs going up with sky-high expectation, intuitively you know it won’t add up for two reasons. First the ocean may be vast but it is not limitless. But beyond depletion… I think there will be emergent risk: we don’t really know yet how these things interact with each other because they are fairly recent.”

Activity in the South China Sea illustrates the complexity of blue acceleration, says the report. Lying on the edge of the Pacific Ocean, its 3.5 million square kilometres are bordered by six countries which are in dispute about ownership and rights to its bounty. This sea hosts more than half the world’s fishing vessels, is a major node in the network of undersea telecommunications cables, and sees $3.4 trillion-worth of goods pass through aboard an estimated one-third of global maritime traffic.

Norway is another example, according to the report. Bordering the North Sea in northern Europe, and with a long coastline, its government is aiming for a five-fold increase in salmon production by 2050, though the aquaculture industry already lacks production space. The fishing sector is concerned about pollution from aquaculture and fears cultivated salmon might escape and mix with wild populations. Meanwhile, Norway’s cruise tourism industry is preparing for a five-fold increase in visitors by 2030, oil and gas production are still growing, and now floating offshore wind farms have been mooted. In September 2019, massive sulphide deposits rich in metals and minerals were found on Norway’s continental shelf.

The ocean may be vast, but it is not limitless.

Lance Morgan, president of the Marine Conservation Institute in Seattle, United States, said: “If anything [the scientists] understated the issue. It’s not just about trying to wisely manage all the different activities, it’s about keeping the ocean functioning at the same time.

“[The ocean] is the largest ecosystem on Earth and if we do create problems that relate to its lack of resiliency – its ability to provide oxygen, absorb carbon and function properly – it’s not just the ocean that’s failing. It’s really our whole climate and life support system.”

Countries have the right to manage resources within the 200 nautical miles of their coastlines. Beyond this lie the “areas beyond national jurisdiction”. The water column and the seabed are treated separately, as are different sectors of ocean activity, such as fishing, shipping, mining and pollution.

Recently, there have been efforts to create a legally binding global agreement on conserving marine biodiversity in the high seas, and in March governments will meet in New York to try to complete a UN treaty to ensure “conservation and sustainable use of marine biodiversity of areas beyond national jurisdiction”.

But this treaty is not allowed to undermine the International Seabed Authority (ISA), which sets rules for the exploitation of resources on the sea floor. The ISA is meeting in Kingston, Jamaica, this week to continue talks on a code that would govern eventual mining operations.

NGOs and scientists are calling for a ten-year moratorium on deep-sea mining so that scientists can fully understand the risks.

Full speed ahead: 2020 is a pivotal year for the ocean