The global media focus on the 340 fishing vessels – many of them Chinese – encircling Ecuador’s abundantly biodiverse Galapagos Islands could prove a watershed moment in deep-sea fishing regulations.

While the fleet is not new and there was no evidence of illegal activity, the increased international scrutiny of Chinese fishing, as Kunming prepares to host the UN’s rescheduled biodiversity conference (COP15) in May 2021, could sharpen Beijing’s oversight of its distant-water fishing (DWF) fleet.

Five economies, mainland China, Taiwan, Japan, South Korea and Spain, account for 80% of the total catch from international waters. Coastal nations have introduced catch quotas and improved the monitoring and stewardship of fisheries in their Exclusive Economic Zones (EEZ), which extend 200 nautical miles from their shores. However, the waters beyond remain largely unregulated.

“The aggressiveness of the distant-water fishing industry threatens the delicate balance of ecosystems across the world,” says Yolanda Kakabadse, a former Ecuadorean environment minister now in charge of the Galapagos’ marine protection strategy.

The fleet off the coast of the Galapagos Islands may not have entered Ecuador’s EEZ and the vast majority of the ships used “jigger” equipment to fish for squid, a technique that results in less bycatch than long-line fishing. Yet even this activity has an impact on neighbouring areas given that squid are a vital part of marine food webs.

“Fish don’t respect EEZ barriers, they migrate across them,” Kakabadse says. “The Galapagos Islands host one of the richest ocean ecosystems on the planet but we have seen a decrease of shark, manta ray and turtle populations and that in turn affects bird and land species.” 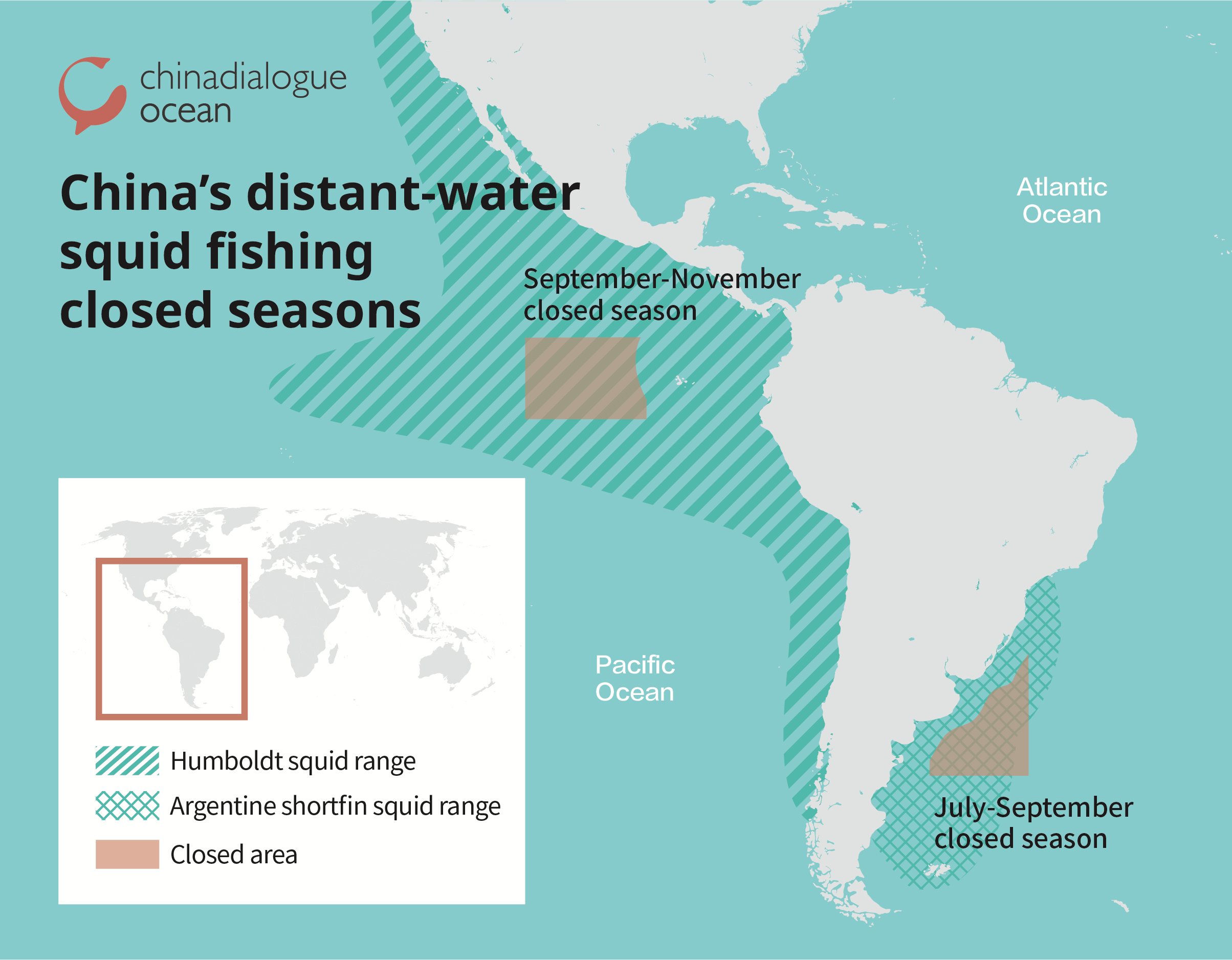 With no onboard observers to monitor the size of catch and the existence of by-catch, DWF has a major problem with traceability. The use of reefer vessels, which transfer the produce of dozens of vessels to port, make it difficult to identify what ships have caught.

“DWF is the Wild West of the fishing industry,” says Milko Schvartzman, a marine conservationist who tracks the fleets. “No one knows how much is culled, the only record comes from the captains and many ships engage in IUU [illegal, unreported and unregulated] activities. It’s regular behaviour for them.”

One of the ships off the coast of Galapagos is the Hong Pu 16, which was detained in April after encroaching on Argentina’s EEZ. According to reports from local fishermen, up to 90 ships had entered the EEZ after waiting for the coastguard to leave the area and turning off their Automatic Identification Systems (AIS).

“Spain obliges its distant-water fleet to keep its AIS turned on,” says Schvartzman, adding that the Chinese government rarely sanctions vessels and its policies have actively supported the rapid growth of the fleet.

Under China’s “Going Out” strategy, adopted at the turn of the millennium to encourage the establishment and development of new overseas markets and supply lines for natural resources, fishing is identified as a strategic industry. Fuel subsidies for DWF were introduced and ever larger ships were created to “build China into a strong maritime country”. By 2020, Chinese firms owned over 2,900 DWF vessels, 40% of the world’s total DWF fleet.

However, the rate of expansion has been curtailed in recent years. China’s 13th Five Year Plan, launched in 2016, introduced a cap of 3,000 DWF vessels.

“The Chinese government is under pressure around the world as a result of IUU fishing,” says Wei Zhou, oceans campaigner for Greenpeace. “This has a real impact on China’s reputation. Since 2017 we have seen a change in policy towards DWFs and this year revisions have been made to the regulations that result in strong punishments for IUU activities.”

Following media attention in August, China announced a three-month moratorium on squid catching around the Galapagos Islands. However, this could be seen as a hollow gesture since squid have already migrated out of the region. All the same, the move suggests that at the very least China wants to clean up the international image of its fleet.

“There is wisdom in the Chinese authorities,” says Kakabadse. “They are part of multilateral agreements and care about their reputation and becoming a model for fishing and other topics. I believe that when they understand how damaging DWF has become they will act upon it.”

There are signs China is already taking concrete steps to better control its fleet. In early 2020, China introduced a raft of revisions to its Distant Water Fishing Management regulations. These include a blacklist for ship captains engaged in IUU; better reporting; the introduction of on-board observers for trans-shipment vessels; and a legal requirement to make hourly transponder recordings.

For the first time, the regulations refer to the “sustainable development” and better control of the size of the fleet.

However, implementation remains a challenge. “There is a major imbalance between the fishing capacity of Chinese companies and the ability to manage and oversee them,” says Wei.

Effective global regulation of the DWF industry would require greater multilateral efforts. Yet any hopes that DWF would be included in the UN agreement on marine biodiversity beyond national jurisdiction appear to have been dashed, according to Schvartzman.

Nor is China a signatory to the Port State Measures Agreement (PSMA), the international framework for tackling illegal fishing administered by the UN’s Food and Agriculture Organisation. The treaty obliges countries to verify ships’ registrations and close their ports to those suspected of engaging in illegal activity, precluding the offload of illicit catch.

Perhaps the most promising avenue for protecting fisheries outside EEZs are Marine Protected Areas (MPAs), which are “a nest for fish with the capacity to protect and replenish”, according to Kakabadse.

Ecuador’s president Lenin Moreno has announced his plan to create an MPA that would cover the area between the Galapagos Islands and Costa Rica’s Cocos Island to the north-east.

“The creation of this corridor to the north of the Galapagos would hinder DWF vessels that travel up the coast and we hope that Colombia and Panama will join and expand this reserve around their own islands, to guarantee a multinational marine reserve,” Kakabadse says.

Half of China’s shrimp imports are from Ecuador