Wang Jinyong, 43, has been farming tilapia in Wenchang village on Hainan Island since 1994. His fish are known for their quality and other local fish farmers often stop by to learn the latest techniques.

Wang and his family moved to Wenchang in the ’90s. Originally from Zhejiang province on the mainland, they were drawn by the warm climate and cheap land. Back home land is scarce and he’d have struggled to make a living, he says.

Hainan is China’s southernmost province and the epicentre of the tilapia industry, accounting for 20% of the total output.

When Wang started farming it was common to raise ducks in the fish ponds, which could be sold in the markets of Haikou, Hainan’s capital 100 kilometres away. In those days, farming methods relied heavily on antibiotics, and disposing of duck manure safely was a persistent problem.

In 1999 overseas buyers started turning up in Wenchang. International demand for local fish was growing and many farmers switched to raising fish alone. 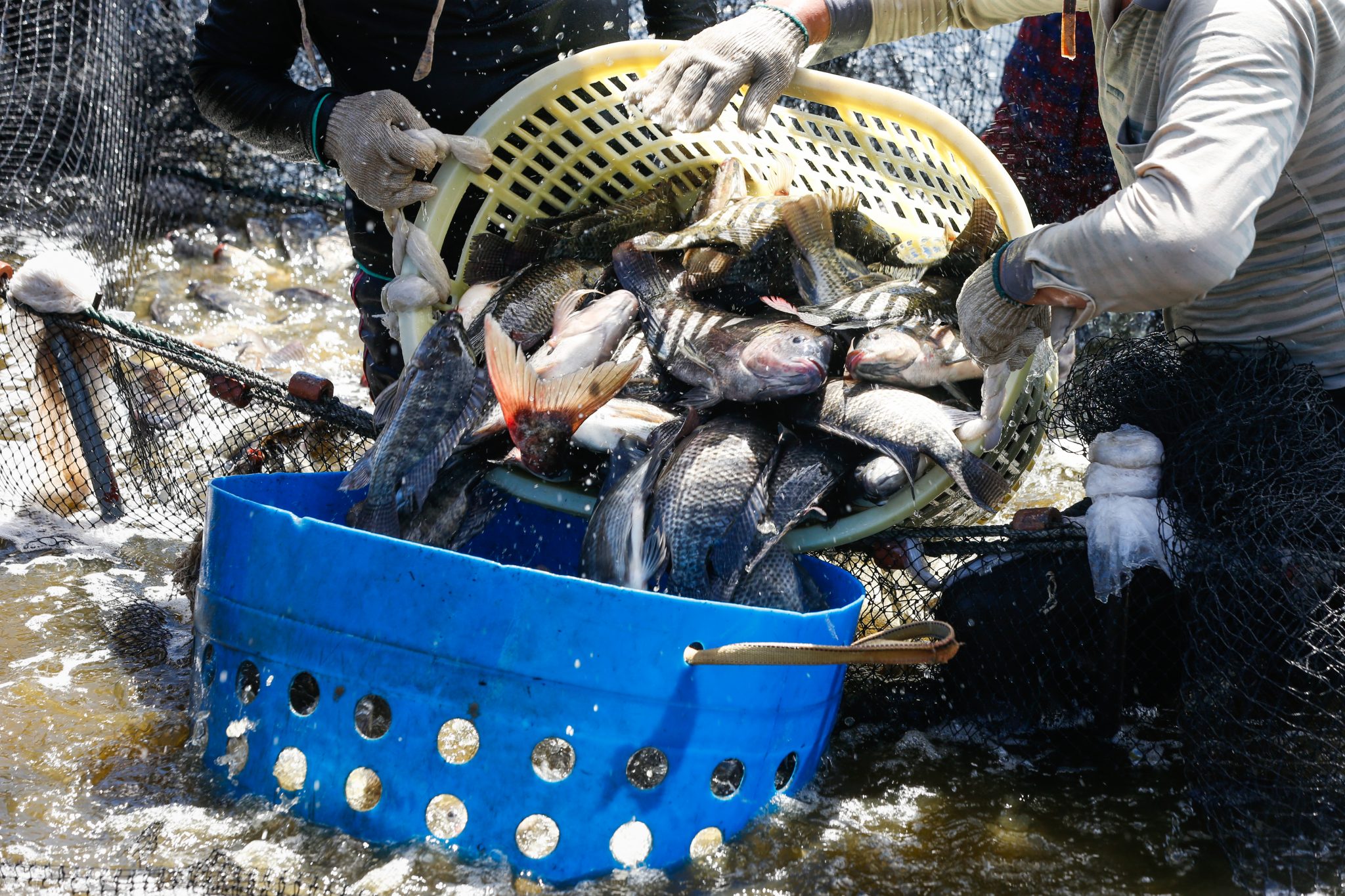 Over 70% of tilapia consumed in the US comes from China. Image: Zhang Xinyan

Tilapia is a white, freshwater fish that originates from Africa. Today it is one of China’s major aquaculture exports. According to statistics from the Ministry of Agriculture, China produced 1.86 million tonnes of tilapia in 2016; one third of total global output. Almost a quarter of this was raised for export.

“It’s the chicken of the fish world,” says Han Han, founder of the China Blue Sustainability Institute, an environmental think-tank based in Hainan.

Wang and his wife live by their fish ponds in a run-down home divided into three rooms; a living space, a bedroom, and a store for fish feed. He’s heard that abroad fish farms are well-equipped and more like factories but here in Wenchang this type of family operation is the norm. To keep costs low he only has one full-time member of staff to help manage a farm of 200 mu (33 acres). The bulk of the work, from feeding the fish to fixing the lights, they do themselves.

These small-scale operations are vulnerable to bad weather and market instability. Farmers have to provide even the most basic infrastructure themselves, and split the cost of maintaining the nearby roads and power supply.

Another problem is the ongoing slump in tilapia prices. Despite being a major producer, China faces increasing competition from its Asian neighbours. The country’s exports have been steadily falling as a proportion of global output. 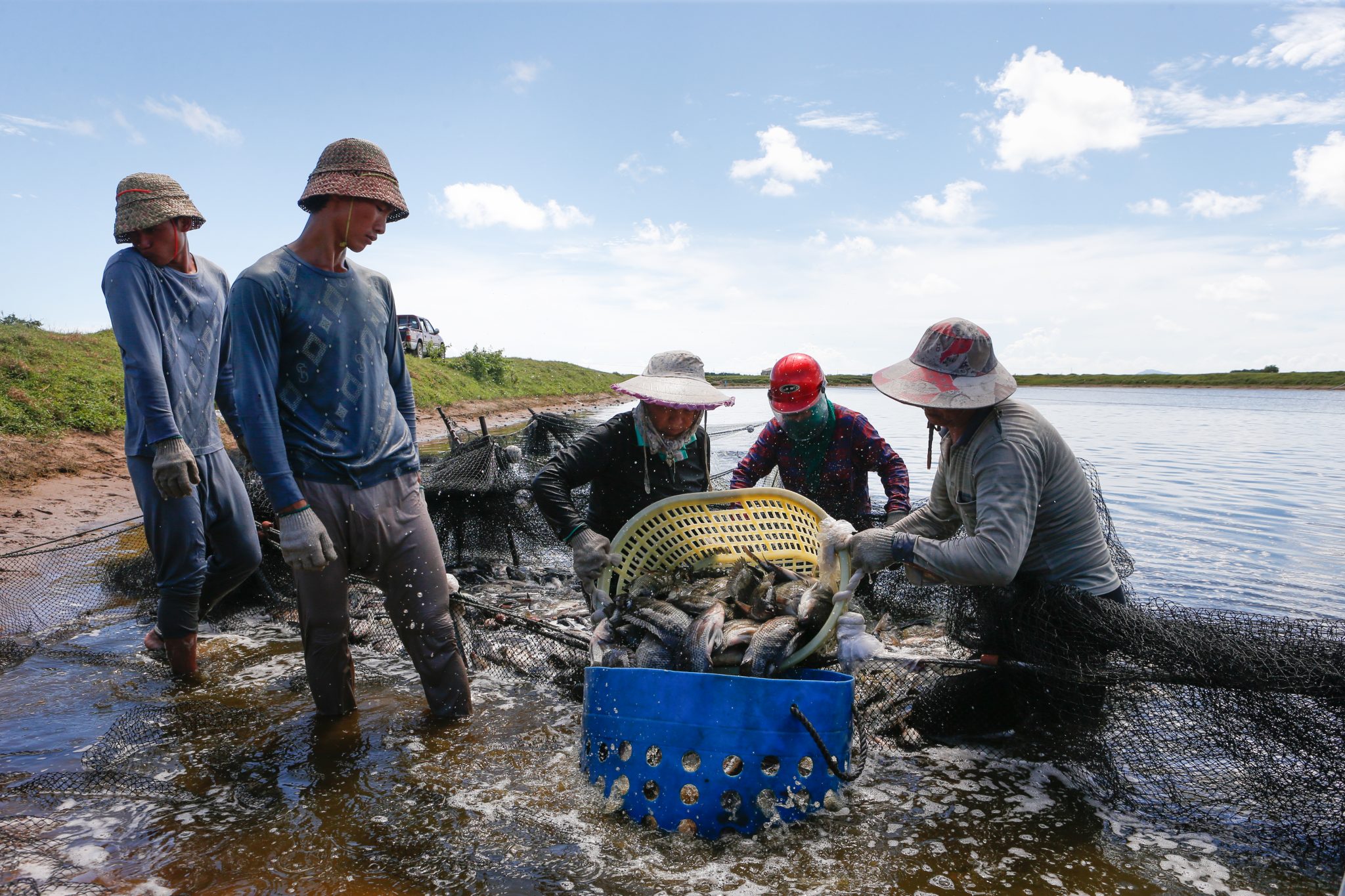 Wang says that the price of his fish has barely gone up in twenty years. Labour costs and other overheads, however, have increased a lot. The couple have had to borrow money to get through the worst years.

Many farmers have tried to reduce costs by farming more intensively. But the extra waste from too many fish has left ponds polluted. Added pressure to produce healthy fish has led farmers to overuse antibiotics.

The overuse of antibiotics in aquaculture has become a major issue in China. It speeds up the development of antibiotic resistance (when bacteria become resistant to the medicines used to treat infections) in fish and people. In 2016 the State Council’s Commission on Food Safety, and other bodies, launched an initiative to investigate and rectify the problem.

Attempts to reduce production costs have, on the whole, been unsuccessful. Wenzhang’s farmers say their costs have stayed around 3.70 yuan (US$0.5) per kilogramme for years, while sale prices have stayed at 4 yuan (US$ 0.6), keeping profit margins low.

International demand for Hainan’s fish took off in the late 1990s, prompting many farmers to switch from raising ducks to fish. Image: Zhang Xinyan

Small-scale farmers also struggle to meet the international standards demanded by importers in Europe and the United States.

“When the sector started trying to sell on international markets it was met with nit-picking and scepticism,” says Han Xuefueng, secretary of the Hainan Tilapia Sustainability Alliance. To meet export standards processing plants and fish farms must go through the certification processes used by overseas buyers. For small-scale operations it is difficult meet those standards.

When overseas buyers visited Wang’s farm they were concerned about the use of antibiotics and the quality of fodder. Some buyers also require farms to fence off ponds in order to prevent infection from nearby livestock. But Wang’s ponds can’t be fenced off. 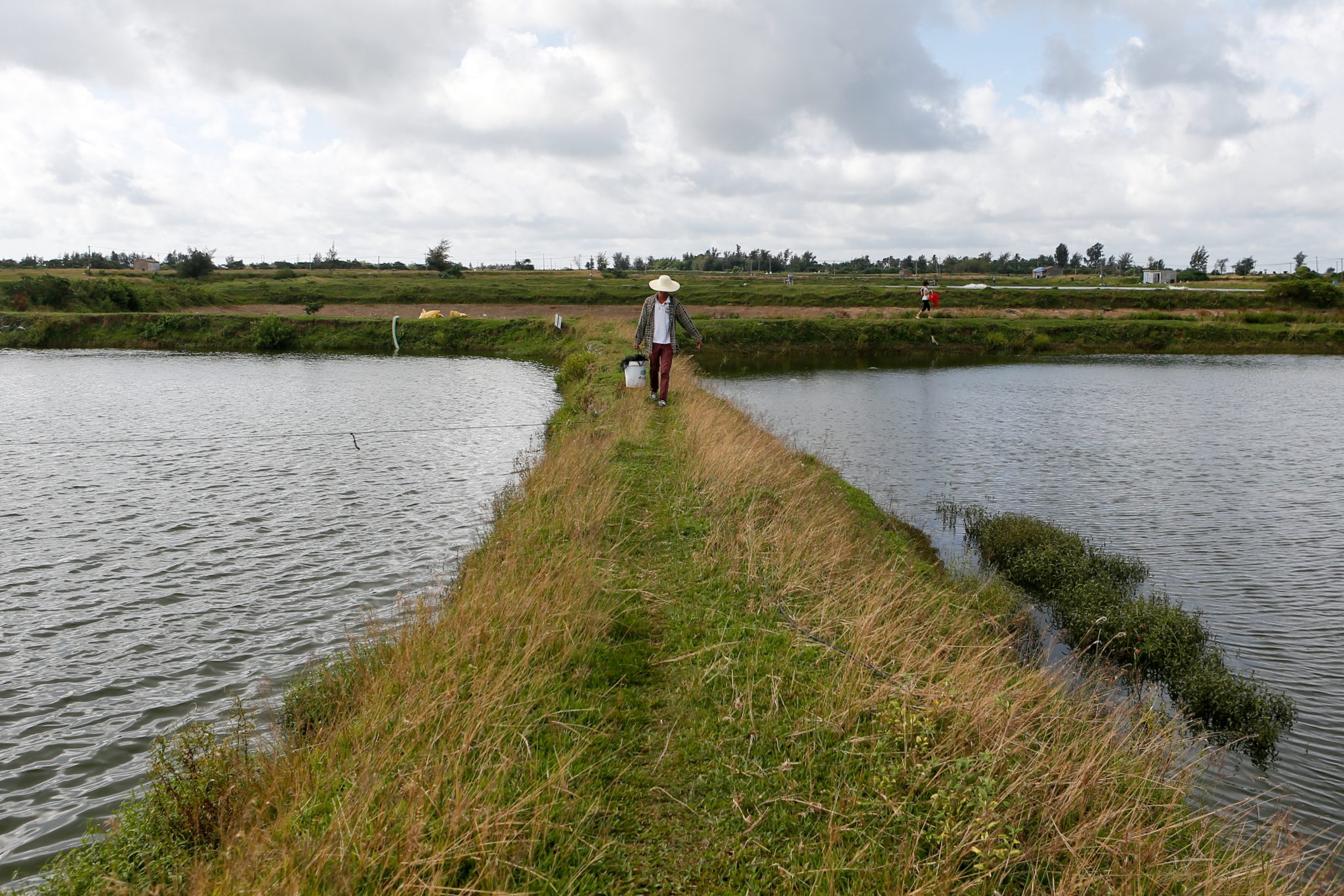 Wang manages his 40-acre farm with his wife and one full-time member of staff. Image: Zhang Xinyan

This is a common problem for Hainan’s fish farmers. Local villagers who own the land often keep a cow or two, and grazing rights are thrown into the bargain.

“It’s hard to keep good relationships with the local community if their livestock can’t feed off the grass,” says Xuefeng.

Han Han has spoken to many farmers about the difficulties of meeting international standards.

“It’s not that the farmers are failing, but some [regulations] just aren’t suitable for family operations in China,” she says.

Zhang Wenbo, a lecturer at the College of Fisheries and Life Science at Shanghai Ocean University, studies the development of sustainable aquaculture. He says that few consumers are willing to pay extra for sustainably-farmed fish, even in the US and Europe. Factor in the upfront costs and enthusiasm for doing so is often low.

In countries where aquaculture is more industrialised things are different, says Zhang. In the UK and Norway only a few large companies farm salmon, which makes promoting sustainability easier.

With help from a local industry association the fish farmers of Hainan are testing a new approach.

“With the right stock density, you can improve water and soil quality using natural bacteria and lime,” says Wang, wearing a broad-brimmed straw hat as he tours his ponds. 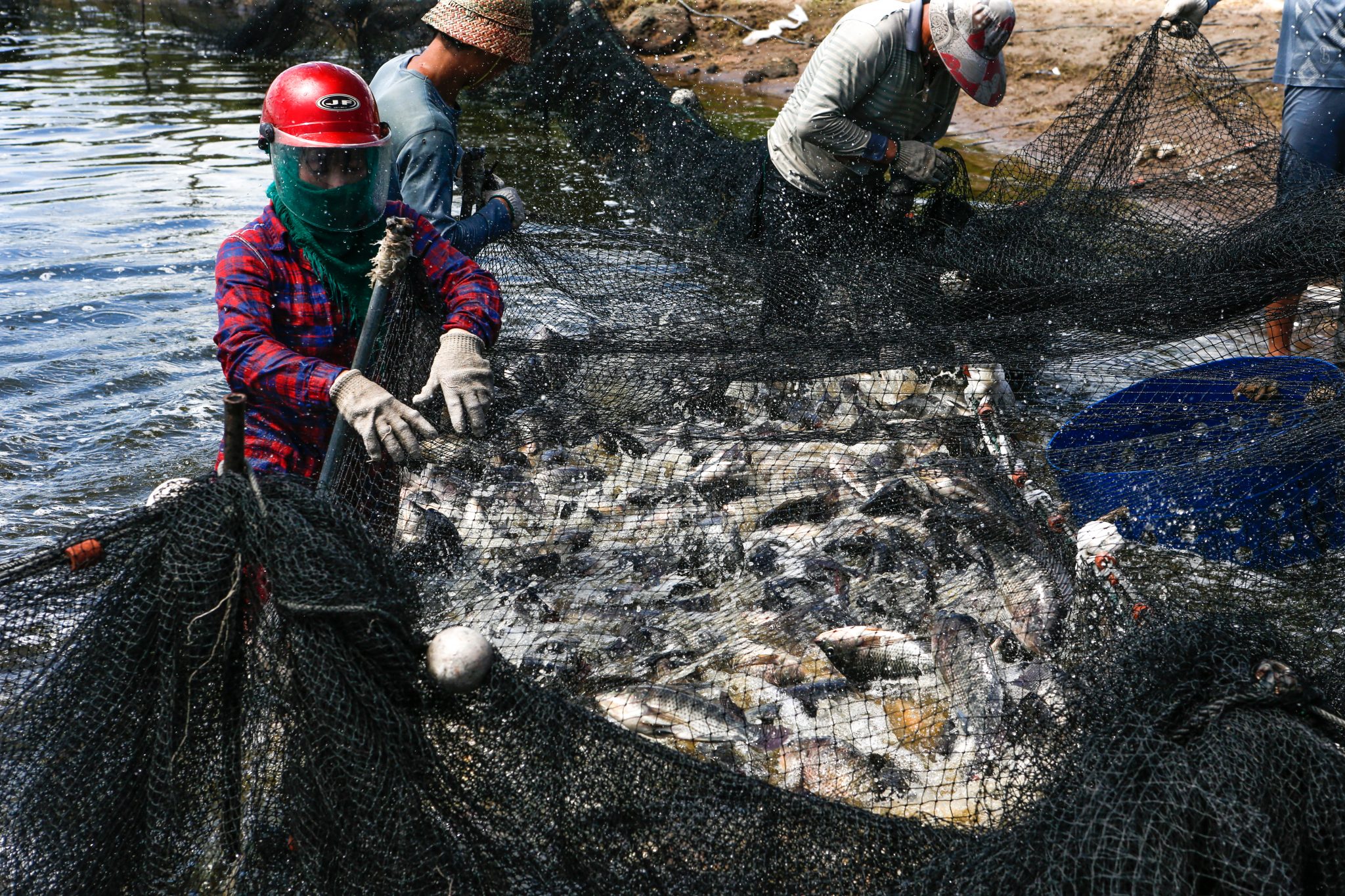 In 2016 China produced 1.86 million tonnes of tilapia, one third of the world’s supply. Image: Zhang Xinyan

Using a handheld measuring device and pH indicator paper, he can keep track of indices such as dissolved oxygen and ammonia concentrations in his ponds. This tells him if the environment is healthy for the fish or not. He’s been recording this data for years.

This is why, when the Hainan Tilapia Sustainability Alliance was choosing 20 model fish farms, Wang’s was included.

The alliance has long worked to bring aquaculture up to standard, and advocates for data collection and data access to allow consumers to track products back to the source.

The association was founded in 2014, with help from China Blue. Its first task was to bring experts and fish farmers together to produce an operating manual for tilapia farming, and to promote those practices widely among its members. The manual covers the handling of water quality and slurry; the safe use of antibiotics; and relationships with nearby communities.

“The consumer is most worried about food safety, but behind that lies the issue of environmental safety,” says Han Han, adding:

“When farmers can’t use regular methods and have to sacrifice the environment in order to make a profit, you end up with food safety issues for the consumer.” 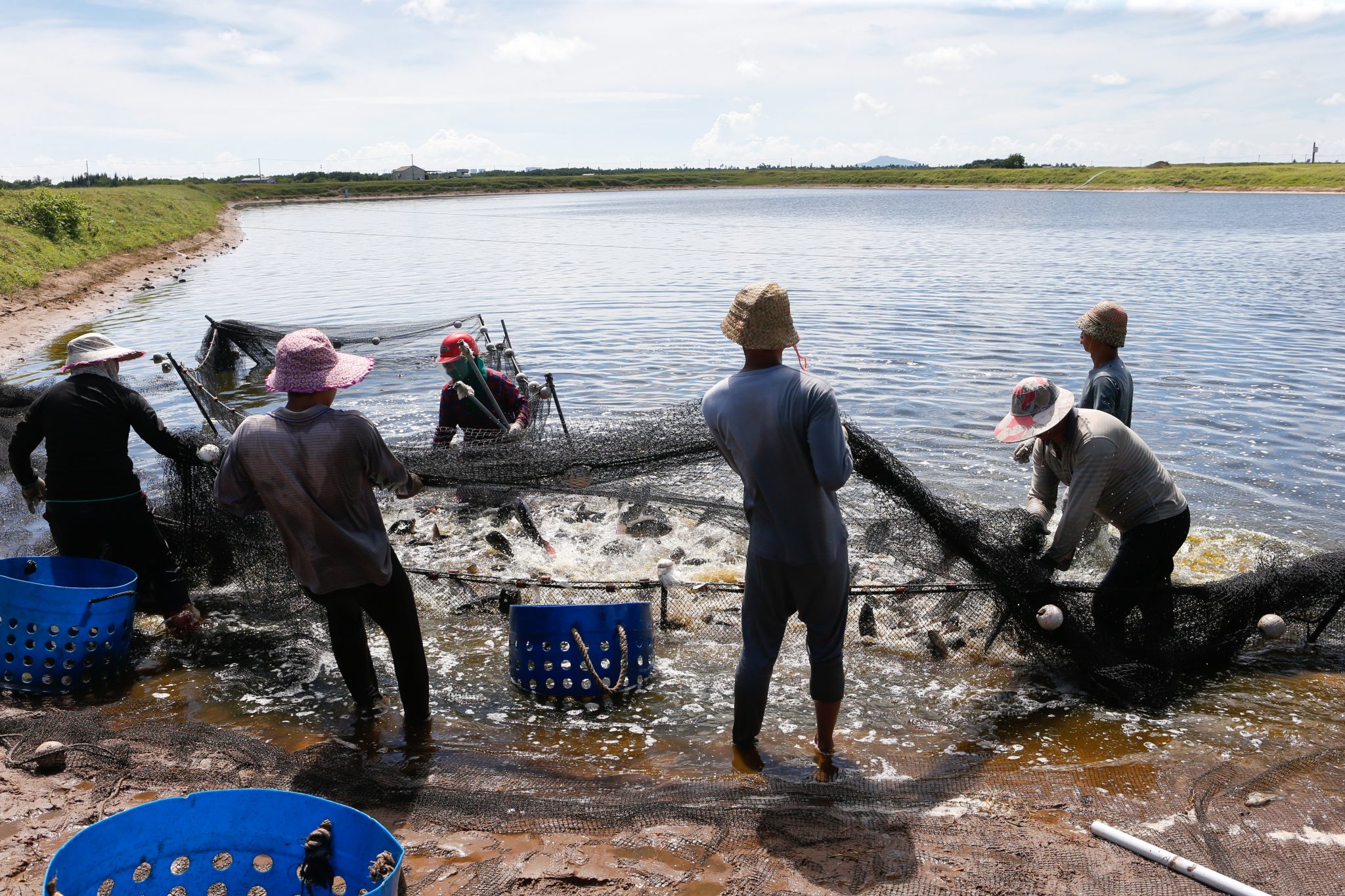 But there are many obstacles to progress.

The farmers aren’t used to working in a cooperative, and education levels in the sector are generally low. Around 80% of farmers end their education at junior middle school. And as sale prices stagnate, many are choosing to quit the business altogether.

“There’s bound to be some consumers willing to pay a fair market price for these products,” she says, hopefully.

‘The battle is on’ to save our ocean