Months after becoming Sierra Leone’s president in 2018, Julius Maada Bio scrapped a much-hyped international airport that his predecessor, Ernest Bai Koroma, had secured with funding from the Chinese government. The Mamamah International Airport would have cost an estimated US$400 million, a sum the new president described as “uneconomical”.

Bio labelled Chinese-funded loan schemes a “sham” that yielded no economic benefits. Yet, three years down the line, the same government has stated in a press release that it is selling one of its most precious ecotourism assets in a similar deal for around US$55 million.

The news in May that more than 100 hectares of pristine forest and beach at Black Johnson, a town near the capital Freetown, was being sold to a Chinese state-owned enterprise for the construction of a fishing harbour has sparked outrage. Rumours circulated that the land was, in fact, intended for a fishmeal factory, though this has been denied by the Sierra Leone government, and there is no evidence for it on the Chinese side. According to authorities in Sierra Leone, the harbour will allow tuna vessels and other industrial fishing vessels to anchor, bringing in more fish to local markets and increasing export capacity.

It is still unclear when the proposed project would become operational, but landowners, conservationists and human rights groups have reacted strongly.

Landowners say residents will be forced to relocate, fishers will be unable to fish and people who work in the market will struggle to buy and sell. In an open letter to President Bio, they described the deal as a “human and ecological disaster”.

Conservationists say the proposed project will have a serious environmental impact, destroying the pristine rainforest, reducing fish stocks and causing pollution. “Are we going to throw all of this to the wind, just so that we would have a commercial [fishery] in the area of Black Johnson Beach?” asked Dr Sama Banya, president emeritus of the Conservation Society of Sierra Leone.

Green Scenery, a civil society group, released a statement asking the government to make the terms of the deal public. In Sierra Leonean law, an environmental impact assessment licence is required before any project of this nature is undertaken.

Loss of land and livelihoods

To date, the government’s only public comments have come in a press release signed by the minister of fisheries and marine resources on 10 May.

The minister said the project was intended to ensure a regular supply of fish to the local market and that the harbour would be constructed with a Chinese government grant and equity in the form of land from Sierra Leone.

Part of the land in question is government owned, including the seafront, and the rest will be acquired through compulsory acquisition, the press release said, with US$1.3 million set aside in compensation for landowners.

Tito Tommy Gbandewa, the owner of a local beach resort, Tito’s Paradise Eco Lodge, is at risk of losing more than a hectare of land. According to him, the compensation package in question is nowhere near the value of the property.

“The government is going ahead with plans without consulting us. We don’t know why,” he says. Gbandewa alleged the community had been intimidated by the authorities. “They bring armed guards, thugs and surveyors every time they come to this place. Sometimes when they enter the village, it is like a war zone. People run away.”

Kadiatu Sesay is a single parent of three who works at Gbandewa’s resort. “This is where I work to take good care of my family and send my children to school. If they close this place, I will lose my job and my family will suffer,” she said.

A co-worker, Brima Bockarie, relates to Sesay’s fears. “This is where most of us get our living from, and we don’t know what kind of development the Chinese want to bring,” he said.

Rumours of a fishmeal factory

Fishmeal factories, which grind locally caught fish into a powder that is exported to feed farmed fish and other livestock worldwide, are a growing problem in West Africa. The industrial fishing used to catch the volumes needed to supply the factories decimates fish populations, leaving fewer fish for local fishers, who have to go further out to sea to catch less and less. Factories in neighbouring countries have been linked to pollution of the land and ocean.

Most of these factories are Chinese-owned, but Spain, Turkey and other countries are also involved.

For Black Johnson, the fear was that a “toxic” industrial fishmeal factory would destroy fish stocks. During the dry season, part of the land in question is a lagoon, which serves as a breeding ground and a nursery for fish to grow before moving into the open ocean.

But the minister of fisheries and marine resources, Emma Kowa Jalloh, refuted the claims in her press release. “The Ministry has read social media reports about a fish mill to be located at the Black Johnson community… The Ministry wishes the general public to know that the facility to be constructed is a fish harbor and not a fish mill as portrayed by the social media writers.”

Chinese-language sources provide more details of the deal. They show the intention to build an industrial fishing harbour linking into the West Africa fishery supply chain, rather than a covert scheme to build fishmeal factories.

Jiaodong.net, a news portal from China’s fishery powerhouse Shandong province, shows that the port is one of the China-aided projects under the Forum for China–Africa Cooperation. The Yantai Development Zone Fishing Port Development Co Ltd will participate in the construction of the port through a joint venture with the Sierra Leone government and the China Railway International Group. It will invest 320 million yuan (US$50 million) to build an “offshore fisheries overseas base through the development of international investment, international transit, and re-export trade”. 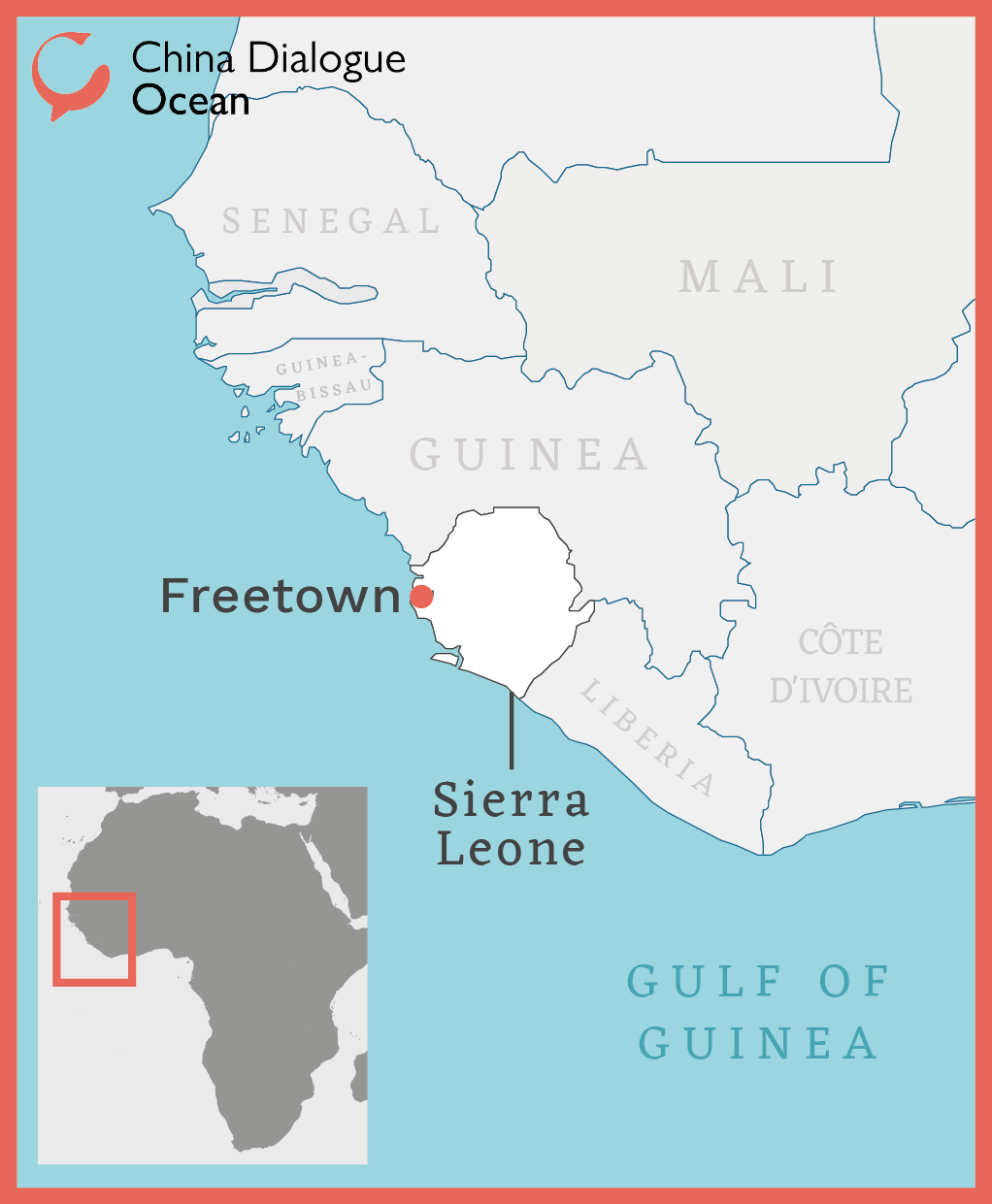 Jalloh said the government of Sierra Leone had been “yearning” for a fish harbour since the 1970s, but could not make it happen due to the huge amount of money needed.

Most of the industrial fishing catch in Sierra Leone is frozen on ships and transferred to larger refrigerated vessels for export. A dedicated fishing port in the country, however, would provide industrial-scale processing facilities to serve Sierra Leone’s large and growing domestic market and to export fresh fish, shrimp and cephalopods via strengthened air links, China Business Network reported.

Jalloh added that the harbour would not only generate revenue and create jobs but also build local capacity in vessel repair and maintenance.

The Chinese embassy’s Du said that the project would help to promote the development of Sierra Leone’s own fishery sector.

SeafareChina, a Chinese news outlet, said: “[The port] will increase Sierra Leone’s domestic fish resources and enhance its export capacity in the international market. Fishing port facilities will include waste management systems that can recycle marine waste and other waste into useful products.”

The need for transparency

Dr Banya remains sceptical. “Do I need to remind all those who are backing such a proposal of the disastrous environmental impact on our country, especially the tourism and the very fish industry that it’s supposed to support?”

The government should provide results of a feasibility study, which explain the potential impact of the project on the environment, he added.

His views are echoed by two human rights organisations, the Institute for Legal and Advocacy for Justice and Namati Sierra Leone. In a joint press release, they demanded the government produce environmental and social impact assessment studies and the evidence on which Black Johnson was assessed as the most suitable location.

In 2017 the World Bank rejected Black Johnson as the site for a fishing harbour project on the grounds of environmental safety.

The Black Johnson Land Owners Group, the collection of aggrieved community members who sent an open letter to President Bio, have also requested the results of an environmental impact assessment as required by sections 23 and 24 of the 2008 Environment Protection Act.

The government has not addressed these issues.

“The site selection and environmental impact assessment of the project are determined or conducted by the government of Sierra Leone in accordance with its own laws and administrative procedures,” said Du.

According to the Chinese embassy, Sierra Leone is one of the biggest West African beneficiaries of China’s foreign direct investment; bilateral trade relations between the two countries increased from US$8.6 million in 2000 to US$510 million in 2019, and trade volumes reached US$320 million in the first eight months of 2020. Besides trade, 4,500 Sierra Leoneans are employed in various Chinese companies around the country, according to the embassy. The country also benefits from Chinese-manufactured products, particularly mobile phones and electrical appliances, at affordable prices.

It was in 2018 that the Sierra Leone government signed a memorandum of understanding (MOU) with China’s government to increase investment in its fishing sector. According to the MOU, a comprehensive fish stock assessment and the construction of a fishing harbour were to be prioritised. But the report of a fish stock assessment, carried out in September 2019, is not in the public domain and no public consultation about the report has been done.

Three-quarters of industrial fishing in Sierra Leone is undertaken by Chinese vessels. The quantity of legally caught fish is massive. As much as 100 tonnes can be caught in a day by one industrial trawler, as compared with 17 tonnes per year for small-scale artisanal fishing. Industrialised trawlers pay small licence fees but often declare less than they take away.

Their use of advanced fishing equipment and the wider range of their engines outcompetes local fishers. Some argue that these fleets, though legal, are not beneficial to the economy as catches are exported out of the country.

Sierra Leone should be earning an estimated US$50 million a year from its fisheries sector. But it ends up with less than US$18 million because of poorly regulated and illegal fishing.

Green Scenery is urging President Bio to reverse the entire plan for Black Johnson and fulfil the government’s commitment to protecting the environment.

The landowners point out in their open letter: “If this is allowed to happen it will jeopardise the entire nation’s food security where 80% of the country’s protein comes from fish. Artisanal fishing is most coastal families’ mainstay.”

Tourist businesses, like Gbandewa’s, will close overnight, leading to unemployment and severe hardship. “It must be stopped,” the landowners’ open letter said.