On December 28, 2011, I boarded the fishing boat 29 at the Zhejiang port of Zhoushan on China’s east coast, and began a two-month long distant-water fishing voyage. I wanted to use my camera to record an industry that is unfamiliar to people back on land, and even to those who work in it.

Distant-water fishing is one of the world’s most dangerous occupations. A storm can sink your boat; you can be crushed under frozen fish; a snapped line can remove an eye. Members of the crew I sailed with lost eyes, or suffered accidents that meant they never made it home.

We set sail from Zhoushan and headed east, to the fishing grounds of the central Pacific Ocean. The voyage would last two years. 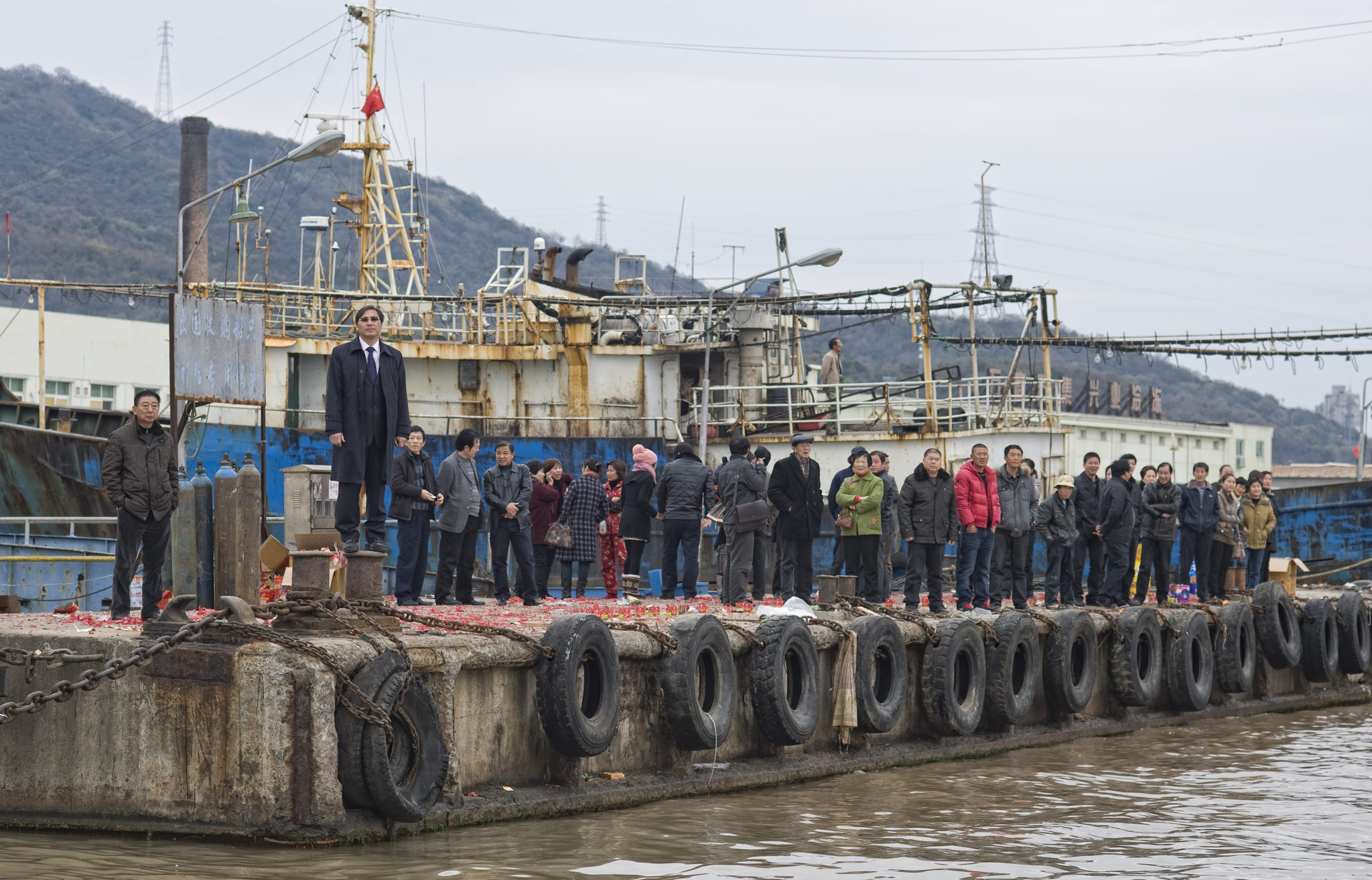 Zhoushan was once one of China’s four largest fishing grounds. But overfishing and pollution have left the fishermen with fewer fish to catch, forcing many to risk longer voyages. A distant-water vessel sets sail at the end of December 2011, the crew members’ families seeing them off. It will be at least two years before they return.

After more than three months of training, medicals and exams, I finally had the necessary certification to join the crew of the vessel, a longline tuna fishing boat captained by Zhuang Jun. The crew numbered 15 and hailed from Zhejiang, Jiangsu, Shandong, Henan, Sichuan and Yunnan provinces. Unlike me, they would stay with the vessel for the full two-year trip. 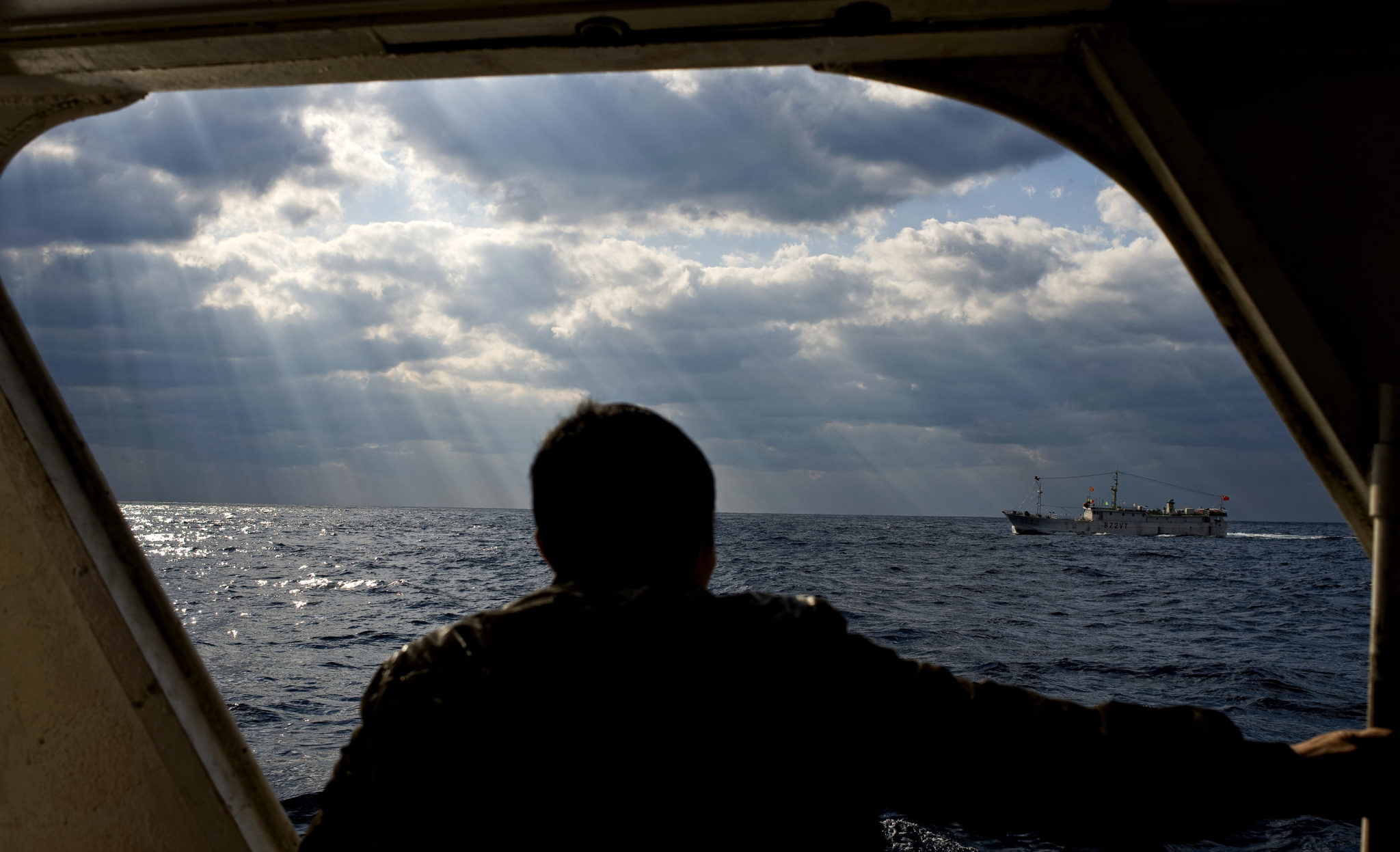 Soon there is no mobile phone signal. As sight of the mainland and the islands is lost, the crew reluctantly head inside. The long voyage begins.

But these fishermen don’t travel such great distances by choice. Zhoushan was once one of China’s four major fishing grounds, but now there are far fewer fish. At one time there were 16 species of fish landed here in annual quantities greater than 100,000 tonnes. Now, there are just eight species. 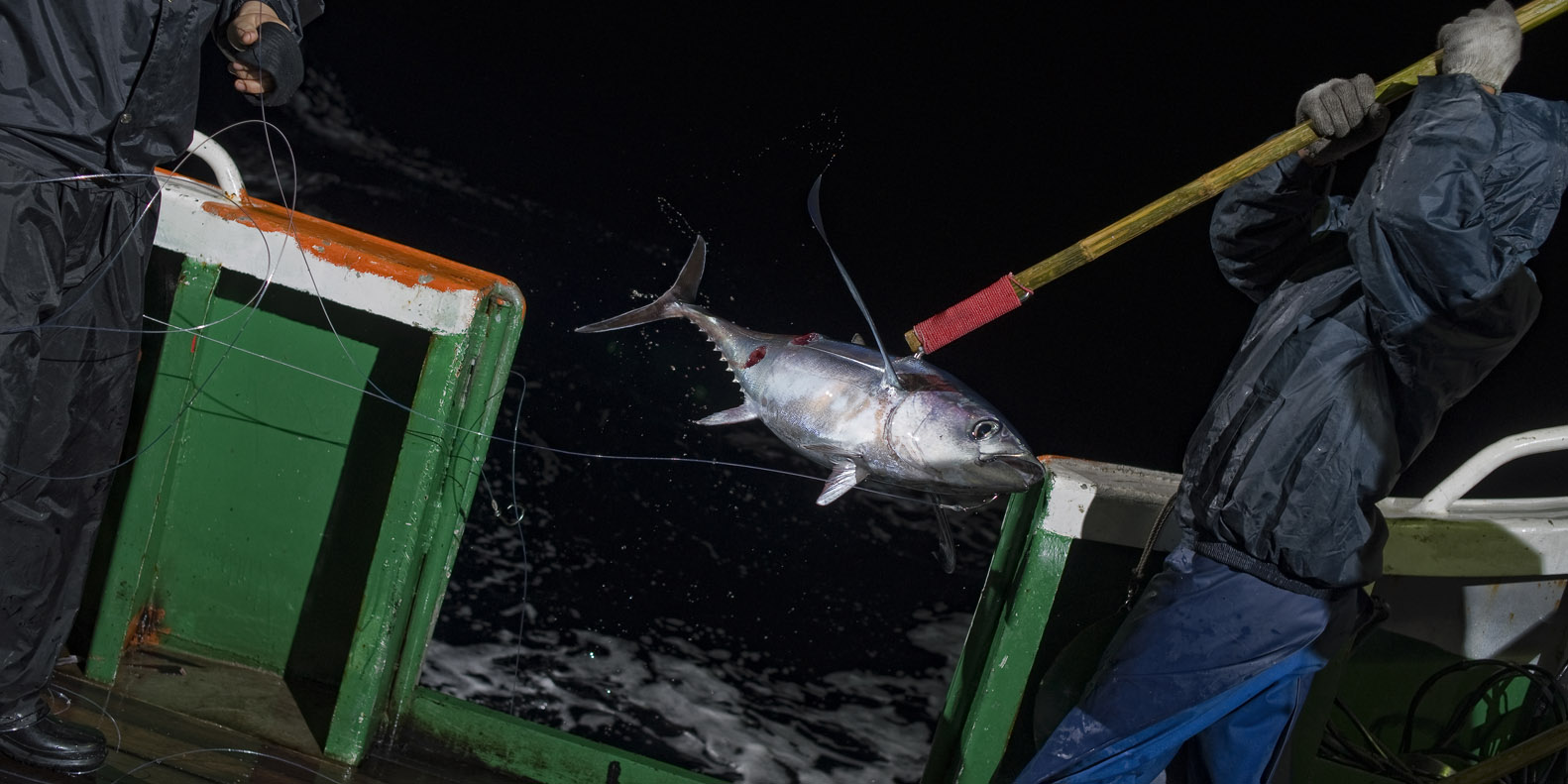 On distant-water longline vessels, the main task is setting and reeling in lines to catch tuna. As night falls the first tuna is hauled aboard to the delight of the crew.

Decreasing fish numbers aren’t the only problem – marine pollution and coastal industries encroaching on the seas have also made coastal fishing tougher. The Zhoushan fishing grounds are criss-crossed by cables and shipping routes; and agreements with Korea and Japan limit where Chinese fishing vessels can work.

There’s only one option now for making a living from fishing – go further.

The sea as captured in film or described in literature is beautiful and romantic. Hemingway’s The Old Man and the Sea might depict the battle between humanity and the ocean, but it also conjures an image of a majestic ocean. As the boat left Zhoushan, the distance between that idealised image and reality seemed to widen. 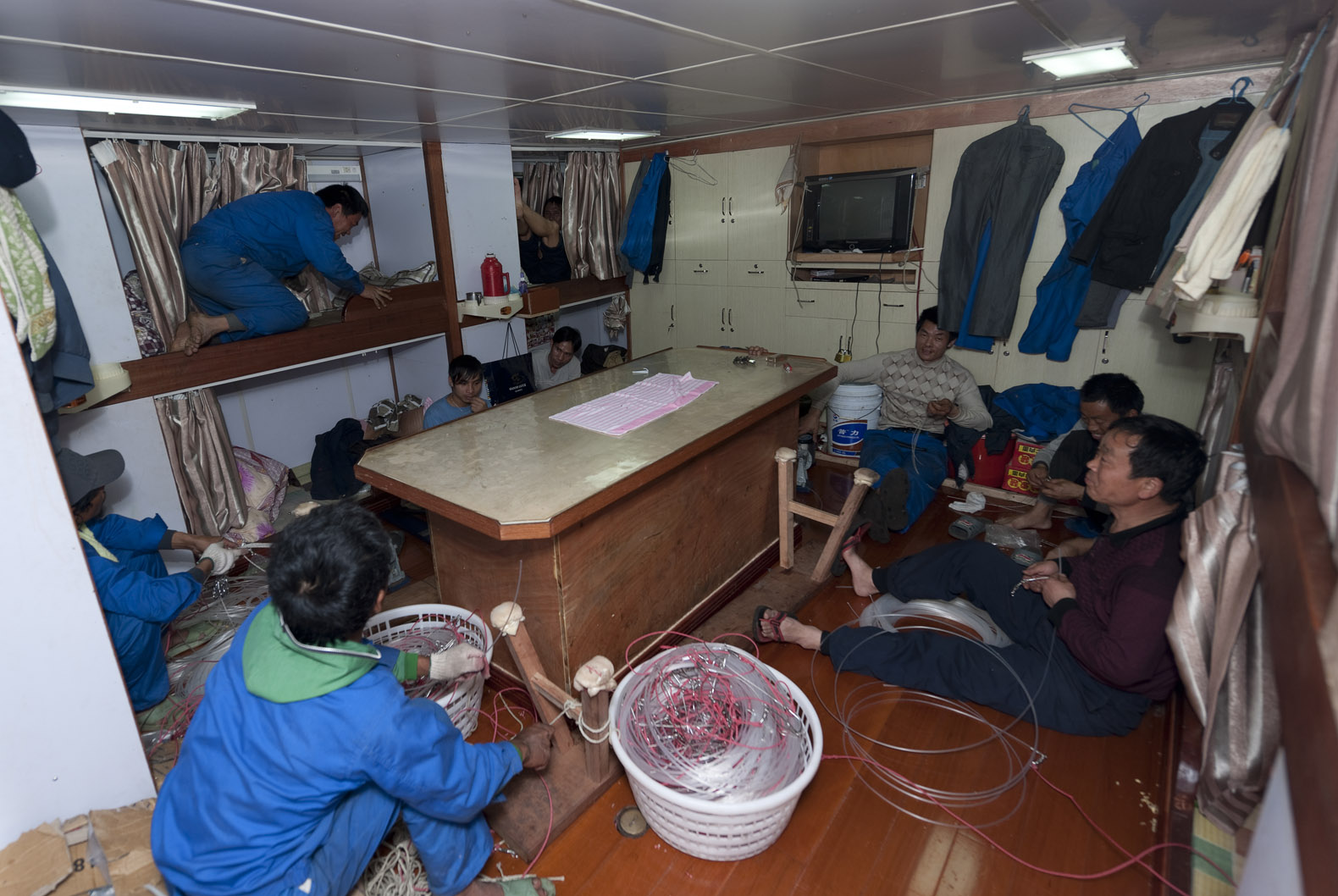 The crew numbers 15 and hails from Zhejiang, Jiangsu, Shandong, Henan, Sichuan and Yunnan provinces. They haven’t known each other long but soon become familiar. They know their lives depend on each other.

Longline fishing involves spooling a main line up to 100 kilometres long out into the sea. Branch lines are attached to it, carrying baited hooks and floats to ensure the hooks hang at a certain depth.

The main tasks on a longline vessel are feeding the line out, and then reeling it back in again. These boats tend to be about 40 metres in length, which makes them manoeuvrable but also means they rock violently in the waves. The first problem for a new crew member is to overcome seasickness. 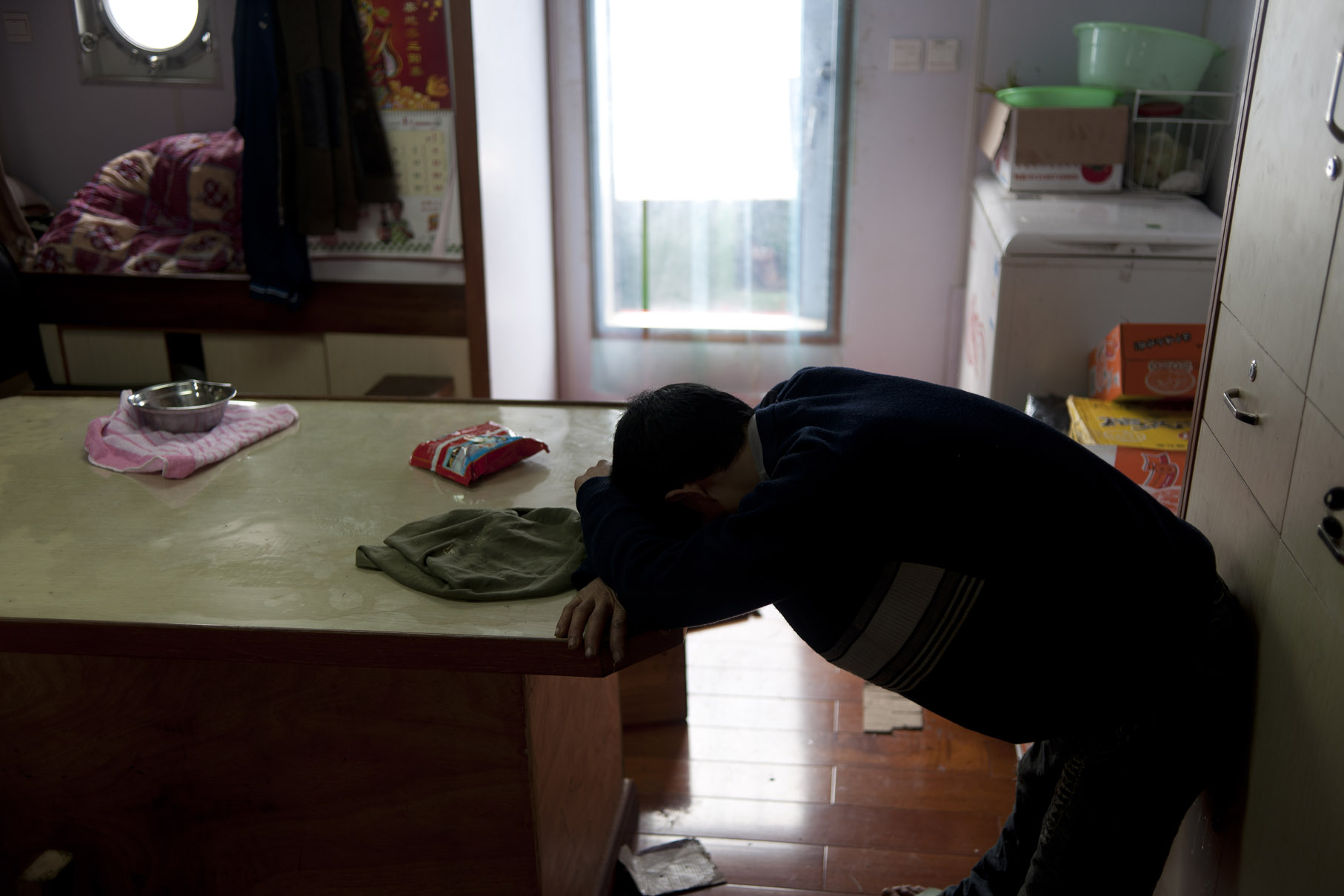 More and more of the crew fall prey to seasickness – sore heads and weak legs make walking hard. When the waves are high even the most experienced crew members are left vomiting uncontrollably.

I’d made full preparations, buying seasickness tablets costing 10 yuan each – the most expensive, but recommended by a friend. Despite taking two I collapsed, vomiting up the medicine and retreating to my bunk with a splitting headache, unable to sleep and hearing the cook in the bunk below, the worst off of us all, moan: “Just let me die and be done with it”.

Finally, the waves subsided on the third day. The captain ordered us all from our beds and out into the sea breeze where he gave us the benefit of his two decades of experience: “The only cure for seasickness is willpower. If you bring up your food, you eat more. If you stay in your bunk, you’ll stay seasick”.

The second test – fear of the storm.

The fishing boat 29 is a modern distant-water vessel. A weather report was faxed in daily but out at sea the weather is unpredictable and our boat gets buffeted by storms caused by localised low pressure, with high winds and waves three metres high. The captain tried to make minor course adjustments to avoid the storms, but if one hit while the lines were being brought in, all we can do is grit your teeth and face it. 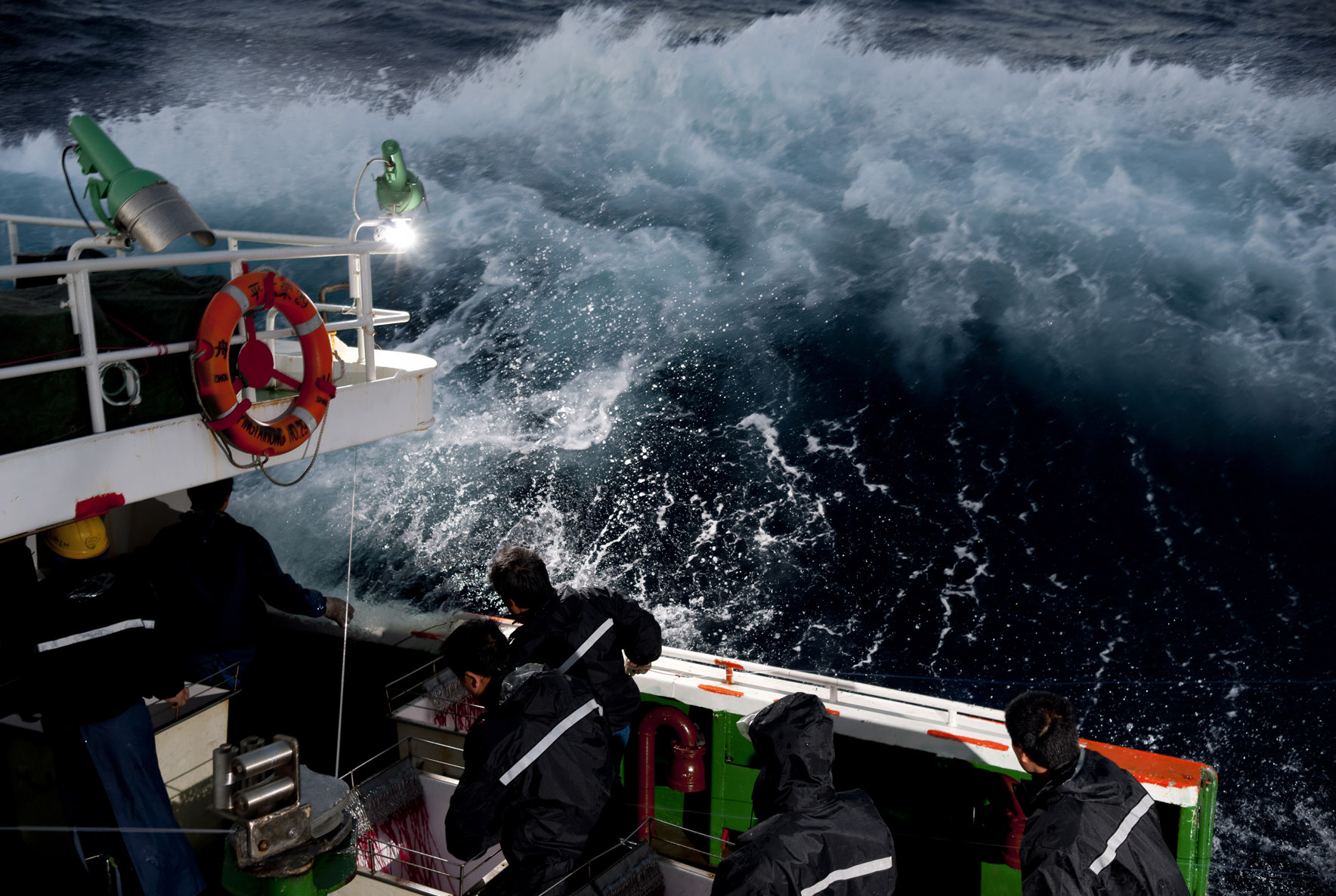 Danger is not long in coming – three metre high waves demonstrate the cruelty of the sea, and the wind’s howl is only made more terrifying by the lonely voice of the engine. Waves crash against the sides, over the deck, even the cabin roof, water sluicing down to wash over the crew and into the boat.

At night, it’s so dark on deck that you can’t see your outstretched hand; the wind’s howl is only made more terrifying by the lonely voice of the engine. Waves crash against the sides, over the deck, even the cabin roof, water sluicing down and into the boat. The cabins are in disarray, everything thrown out of place by the tossing of the seas, as if we’d been hit by an earthquake. Chairs and tables slid across the floor, then back again. I wrapped myself in my blankets and clung to the side of the bunk to avoid being thrown out.

Some days later we’re all used to these storms, but one problem remains: the toilet. Each time I go I find it impossible to squat stably and give up. I eventually realise I have to choose calmer days.

…and not a bite to eat

If you’ve not been on such a voyage, you might assume the life is one of fresh seafood, sea breezes and sunbathing. My experience was one of constant hunger and insufficient freshwater to wash with.

The fishing grounds teem with fish, but unlike trawlers, longline boats don’t bring up the full gamut of the sea’s bounty – no crabs or shellfish or shrimp.

The boat might catch up to two hundred tuna in one day. So there was an ample supply of tuna sashimi – delicious, melt-in-the-mouth tuna, like tender beef. But as I chewed all I saw was the rest of the crew on deck as the waves crashed over them, the whole scene one of sweat and blood. The catch seemed too precious to eat – this was the crew’s wages. 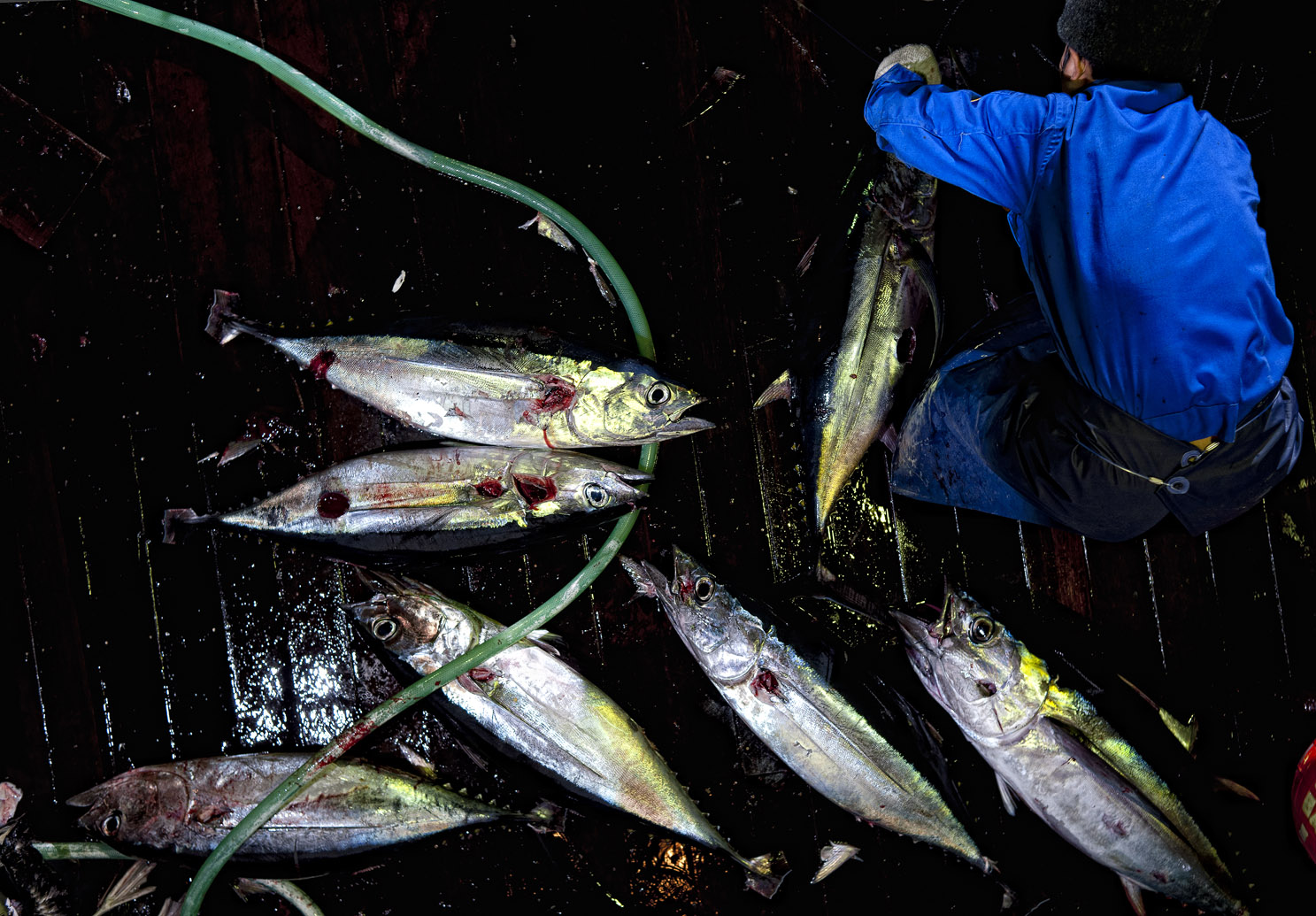 The tuna caught range in weight from 20 to 70 kilogrammes. On the best evening, 200 are caught.

But I never got used to the food served on board. In a wave-tossed kitchen, “cooked” is as good as the food gets. I would sneak into the kitchen at night to drink sugar dissolved in water, to stave off the hunger. Sometimes another crew member would take pity on me and donate a few packs of instant noodles, but that soon became embarrassing – their stocks had to last them a long time yet. 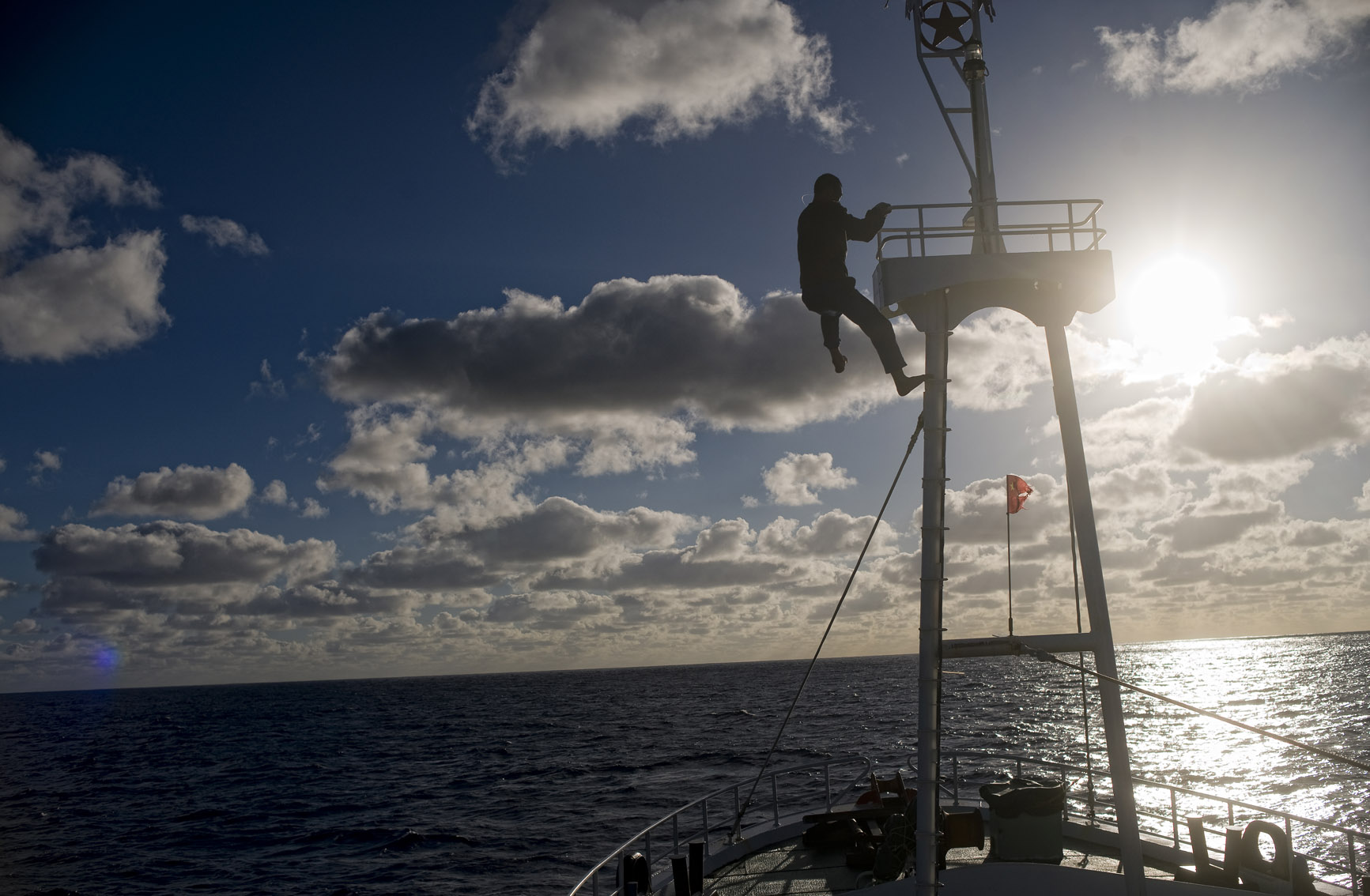 A flag is flown from the mast to celebrate a good day’s fishing.

I’d originally planned to stay with the boat for six months and leave at an island stop-off to find another vessel bound for home. But a supply vessel we met with to resupply happened to be bound for home, so I took the opportunity to leave early.

When my friends saw me, they said I looked like I’d done ten years inside. What, I wondered, would the crew members look like by the time they’d finished their two-year voyage? 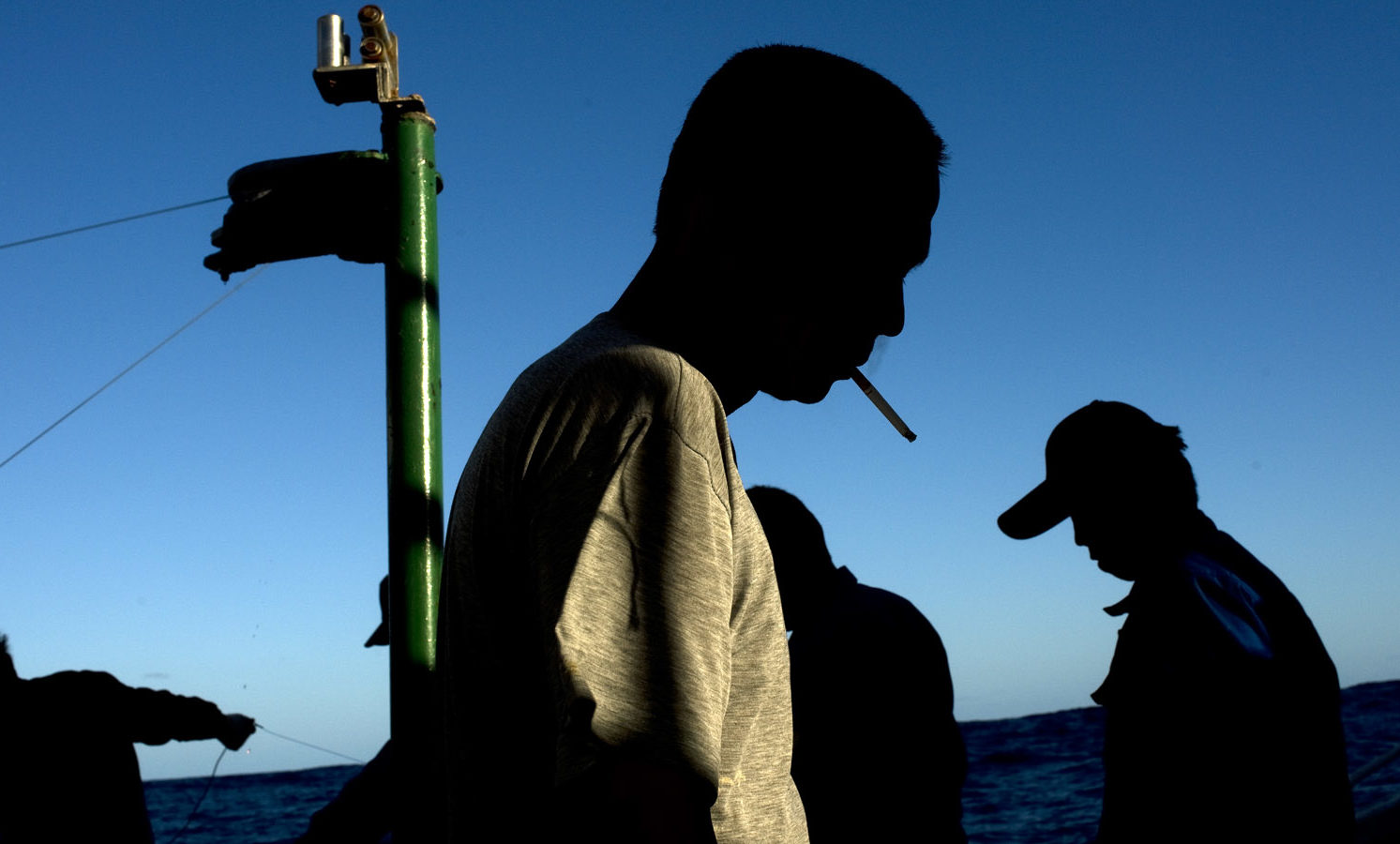 There is nothing to fill the long days but fishing. The crew has already run out of topics of conversation and often just gaze off at the sea for long periods.

When I left the fishing boat 29 I took some letters home for the crew, and had been asked to print off some photos of the crew to add to the envelopes. “Use photos where we’re smiling, nothing that looks like it’s dangerous or difficult work,” they asked.

I often talked with the captain, Zhuang Jun, about how he lived. We’d argue about our “ideals” – what would a reasonable and sustainable method of fishing be? How much is a reasonable wage? 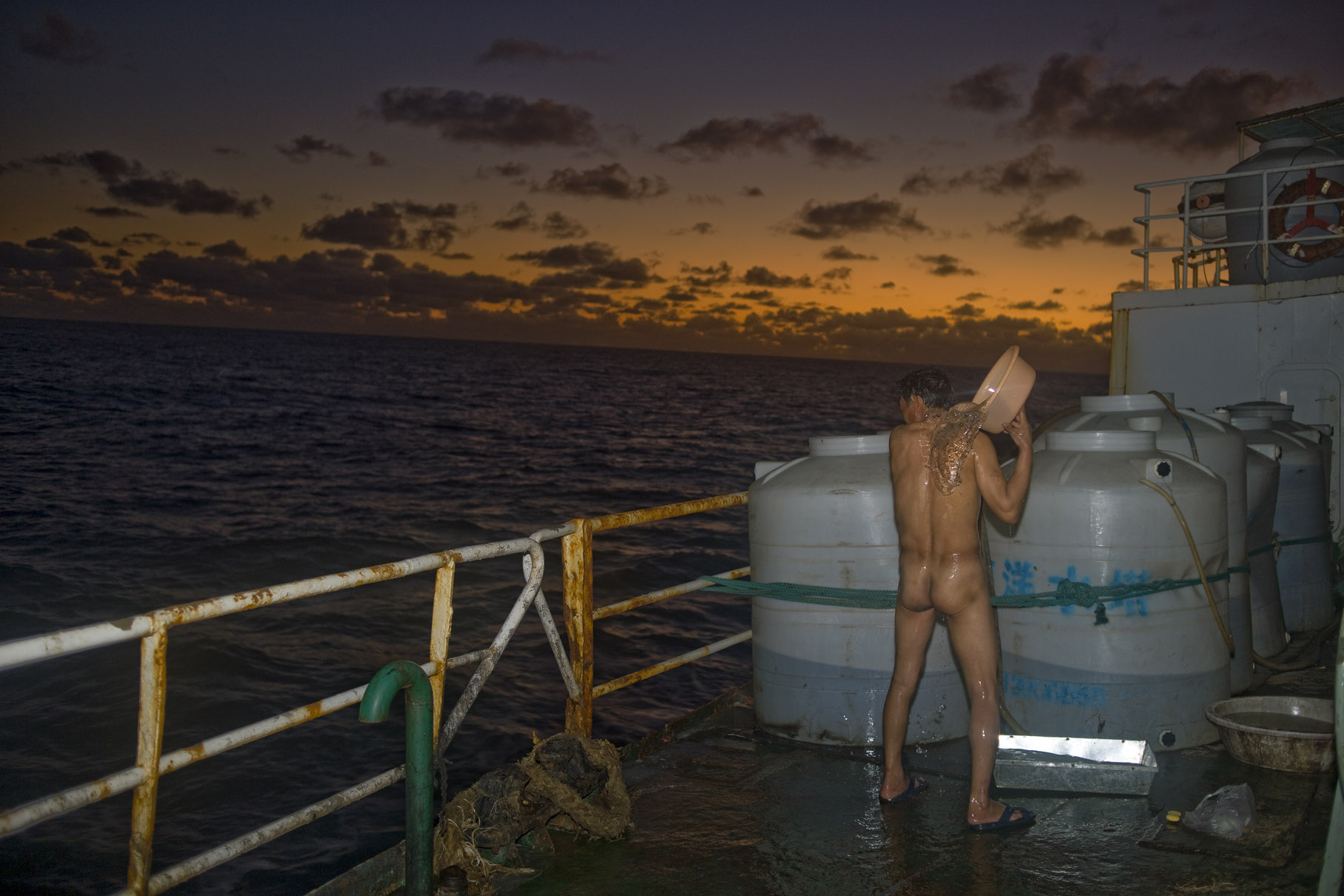 The boat has desalination equipment but the supply of fresh water is still limited. Seawater has to be used for bathing and laundry.

Nobody would do this if they didn’t have to make a living. More than once Zhuang, who’d only ended his last voyage less than four months ago, said “if you can stay on land, don’t go to sea.”

Those were also his parting words to me. 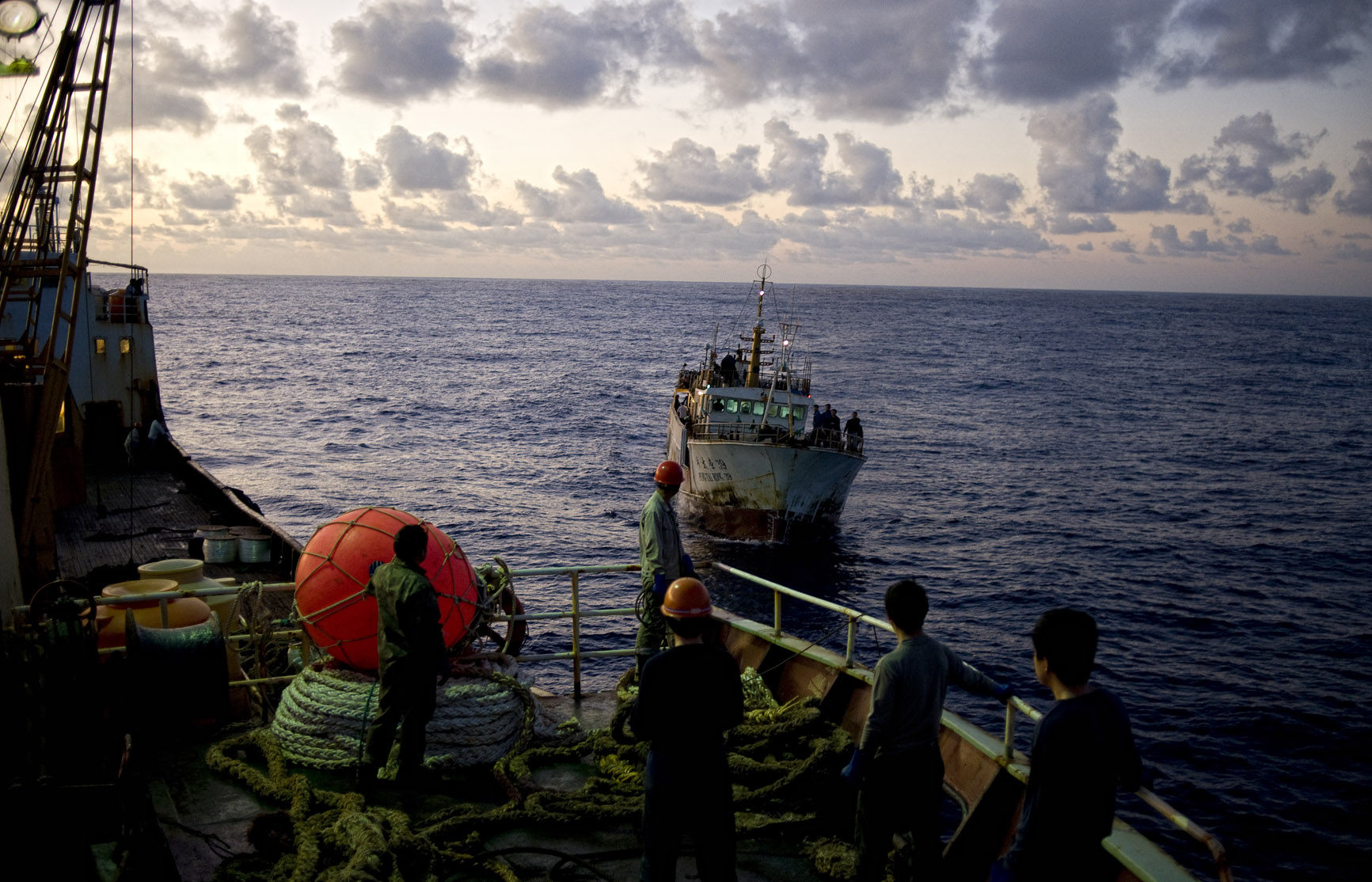 When you haven’t seen a new face for so long, even a rendezvous with a supply vessel is exciting. After two months at sea I return home with the supply vessel, carrying letters from the crew members to their families.

Stam Lee’s collection of photographs of the Chinese fishing industry and its workers, Working the Angry Sea, has recently been published by the Zhejiang Photography Press.

Pressure mounts to take blue shark off the menu