The world’s five largest krill fishing companies, including state-owned China National Fisheries Corporation (CNFC), have agreed to stop fishing for krill in the “ecologically vulnerable” waters off the Antarctic Peninsula from 2020.

Krill are planktonic crustaceans that play a foundational role in the Antarctic food chain. They are eaten by a wide range of species, including penguins, whales, and seals.

The five firms – from Norway, Chile, South Korea and China – which account for 85% of krill catches in the Antarctic, have also expressed support for establishing a large network of Antarctic marine reserves – the first time that fishing firms have offered backing for such reserves.

The announcement follows a Greenpeace campaign to protect the Antarctic Ocean, which is backed by 1.7 million people globally.

“This is a bold and progressive move from these krill fishing companies, and we hope to see the remainder of the krill industry follow suit,” said Frida Bengtsson, of Greenpeace Nordic Protect the Antarctic campaign.

Pulling out of vulnerable waters

Krill are found in huge numbers in many different ocean waters. However, Antarctic krill are particularly sought after by the fishing industry because of their higher commercial quality. Krill are used in animal fodder and for the extraction of krill oil, which contains omega-3, an unsaturated fat with health benefits.

Krill fishing in the Antarctic has been increasing since 2010. Fishing vessels have gradually moved closer to waters that serve as summer feeding grounds for penguins, seals and whales, and spawning grounds for fish in winter.

Krill fishing presents a range of risks to Antarctica, such as interference to the food chain, pollution from fishing vessels, and oil leaks or groundings that would damage ecologically vulnerable areas.

The krill fishing companies are pulling out of Antarctic waters in response to scientific evidence and pressure from civil society.

“Our ongoing dialogue with ARK members [Association of Responsible Krill Harvesting Companies], scientists and the community of environmental NGOs, including Greenpeace, is what makes additional efforts like this possible,” said Kristine Hartmann, executive vice president at Aker Biomarine, one of the biggest krill-fishing companies.

Zhang Tianshu, assistant to the president at CNFC said, “Our commitment on this occasion arose from data on penguin breeding grounds that the scientists provided.”

How important is this?

Fishing companies have agreed to stay 30 to 40 kilometres away from penguin habitats. According to the Convention for Conservation of Antarctic Marine Living Resources (CCAMLR), the body which overseas allocation of fishery resources in Antarctica, krill fishing in Antarctica is concentrated in Major Fishing Area 48.

Data from CCAMLR also reveals that only three vessels, all Chinese, are currently fishing for krill outside of Area 48. Does that mean the Chinese fleet will be less affected by this commitment? chinadialogue wrote to CNFC to ask what the impact on its business would be, but received no response.

China started fishing for Antarctic krill in 2009 and has rapidly expanded its activities. China, Norway and South Korea are the biggest Antarctic krill fishing nations, with Norway leading in terms of catch and processing capacity.

But CCAMLR data shows that China has more krill fishing vessels and fishes over a wider area than any other nation.

“China is a member of CCAMLR and a major krill fishing nation, and therefore plays a key role in marine conservation in Antarctica,” said Zhou Wei.

The 13th Five-Year Plan for fishing industry technology, published in 2017, called for China to increase its krill fishing and processing capacity, and improve its fishing technology and competitiveness to support the growth of a krill industrial chain.

But a white paper on China’s activity in the Antarctic, published the same year by the State Oceanic Administration, included environmental protection as a key principle.

China needs to decide how it will balance exploitation of Antarctic fishing resources with protection of the Antarctic environment.

Pulling out of selected waters will not bring about the sustainable krill fishing that environmental groups are calling for. Greenpeace wants all firms to immediately and strictly limit krill fishing in established and proposed reserves in waters around Antarctica, including the Ross Sea, which is already a reserve, the Weddell Sea, East Antarctica and the Antarctic Peninsula.

In October CCAMLR’s 24 member nations will consider a proposal to make the Weddell Sea a reserve. This would create an Antarctic marine reserve 1.8 million square kilometres in size, making it the largest nature reserve anywhere in the world. 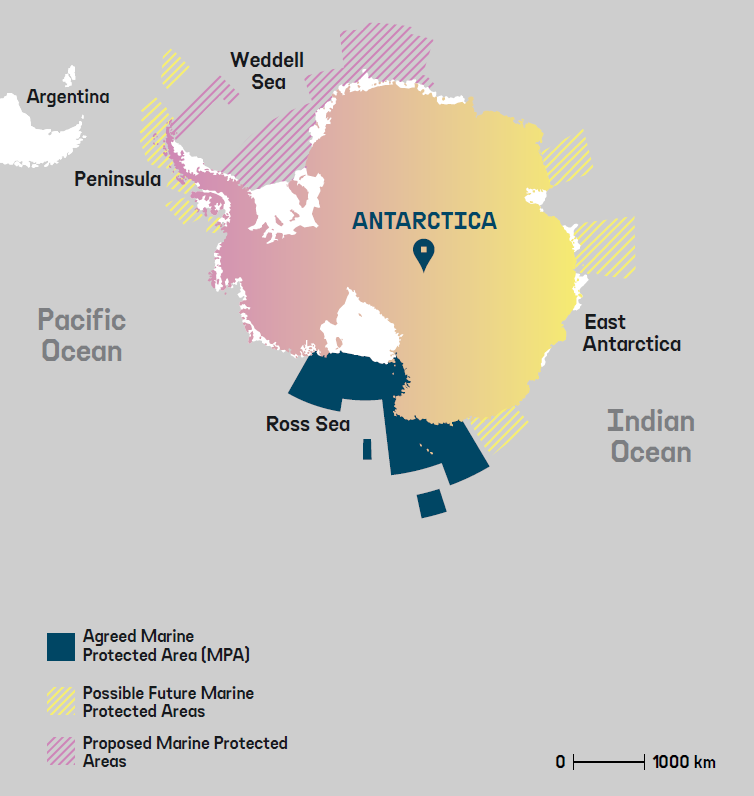 Established and proposed marine reserves in the Antarctic

Chen Jiliang, a researcher on Antarctic governance at Greenovation Hub, told chinadialogue that CNFC and Korea’s Insung had sent representatives to join their respective national delegations negotiating the reserves.

The announcement of a no-fishing zone is the first time that fishing firms have expressed support for marine reserves. Zhou Wei hopes this support will help pass the CCAMLR proposal at the negotiations in October.

“We welcome the statement from the krill fishing firms, which is a big step forward for Antarctic conservation,” said Zhou Wei.

Environmental NGOs, including Greenpeace and the Wildlife Fund for Nature, have been calling for a halt to krill fishing in the Antarctic for years.

But she emphasised that: “Vulnerable Antarctic ecosystems still face many challenges, from climate change, pollution and the fishing firms that still haven’t made this kind of commitment.”