The fishing port of Shidao lies on the edge of Rongcheng city at the tip of the Shandong peninsula. It is China’s fishmeal manufacturing capital.

At the harbour, lorries loaded to capacity with what look like bricks are waiting to set off. Peer closer and you realise that those “bricks” that have just been removed from cold storage are actually made of fish, compressed and frozen into slabs. These fish are known as “trash fish” and are too small to sell for human consumption. Instead, they are stored and transported to a processing plant, where they will be heated, pressed, dried and pulverised into protein powder. Ultimately, this will become fish meal and used to feed farmed fish, poultry and livestock.

In a report on the trade in trash fish, environmental campaign group Greenpeace estimates that 30% of the 13 million tonnes of fish caught in China’s inshore waters annually, about 4 million tonnes, are small fish that are used as fodder. That’s more than Japan’s entire annual catch.

In other words, China is catching more fish to feed other fish than the Japanese catch to eat themselves.

Data from the UN Food and Agriculture Organisation (FAO) shows that in the 20 years from 1995 to 2014, China’s aquaculture output accounted for more than 60% of the global total. In 2015, the country’s aquaculture sector saw output of 49.37 million tonnes.

To maintain this output requires the input of huge quantities of fodder. Zhang Wenbo, a lecturer at the College of Fisheries and Life Sciences, Shanghai Ocean University, estimates that annual demand for fish meal in China stands at 2.5 million tonnes (some of which is used to feed poultry and livestock). But it is unclear how much China produces domestically.

FAO figures put domestic production at only 400,000-600,000 tonnes per year. However, Greenpeace estimates that in 2014 China consumed at least 760,000 tonnes of domestically produced fish meal. Statistics from China’s customs authorities show that in 2016 the country imported about 1.04 million tonnes of fish meal. Whatever numbers you look at, there is no indication of how the rest of that 2.5 million tonnes of demand is being met. 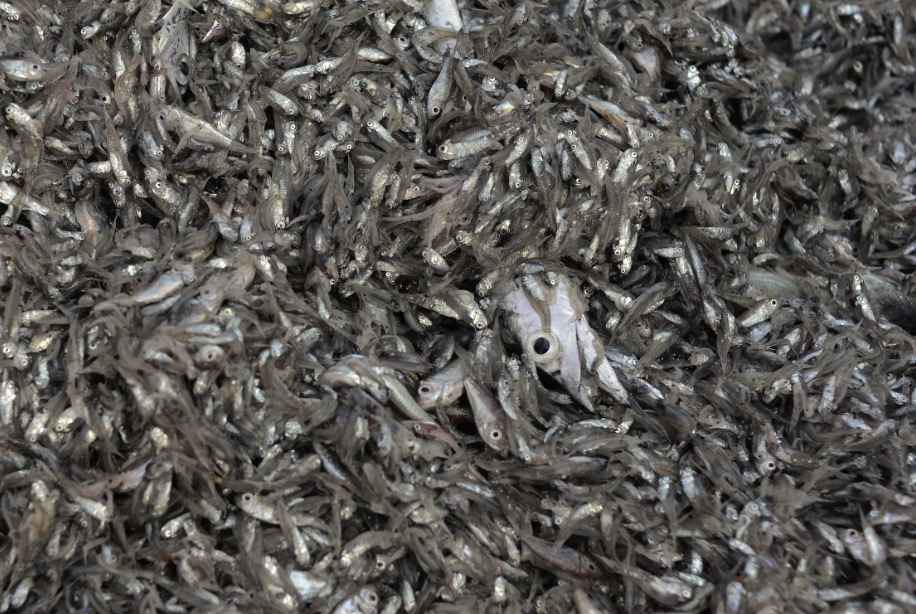 The catch from a trawler working in the East China Sea. Apart from one mature eel the catch is entirely fish for use in feed. Trawlers makes up the most important part of China’s fishing fleet and account for half of the country’s annual marine catch. Greenpeace’s investigation found that on average half of a trawler’s catch is feed fish (Oct, 2014). Photo: Greenpeace/Zhu Li

Zhang Wenbo thinks that hidden illegal trading in feedstocks accounts for the gap. He says that some fish meal factories are unwilling to reveal even how much they produce, much less where their raw supply come from.

Greenpeace’s investigation confirmed that shortages of fish stocks have prompted some plants in Shandong to employ their own fishing fleets.

“China still has large numbers of small or unregulated fishing vessels, and it’s very hard to monitor their catches,” said Zhang. Shandong province is China’s largest producer of fish meal, accounting for 55% of the national total output, he added.

Alongside low-value fish, such as anchovies (China catches less than one million tonnes of anchovies each year), a significant proportion of the fish meal mixture is made up of trash fish in bycatch.

And so we see a strange phenomenon: With commercial catches dwindling, fishing vessels are landing more trash fish, which include young fish yet to reach maturation. Rather than returning them to the ocean to grow and repopulate fisheries that support commercial fishing activities, they are sold on, thereby creating a vicious cycle.

In its 2016 report on the state of fisheries and aquaculture worldwide, the FAO listed inadequate management of bycatch as a major factor threatening the sustainability of the industry.

Greenpeace’s report points out that in China half of trawler catches are trash bycatch fish. These are often at the bottom of the food chain, prey for carnivorous fish and mammals such as salmon, dolphin, sharks and tuna, as well as penguins and seabirds. 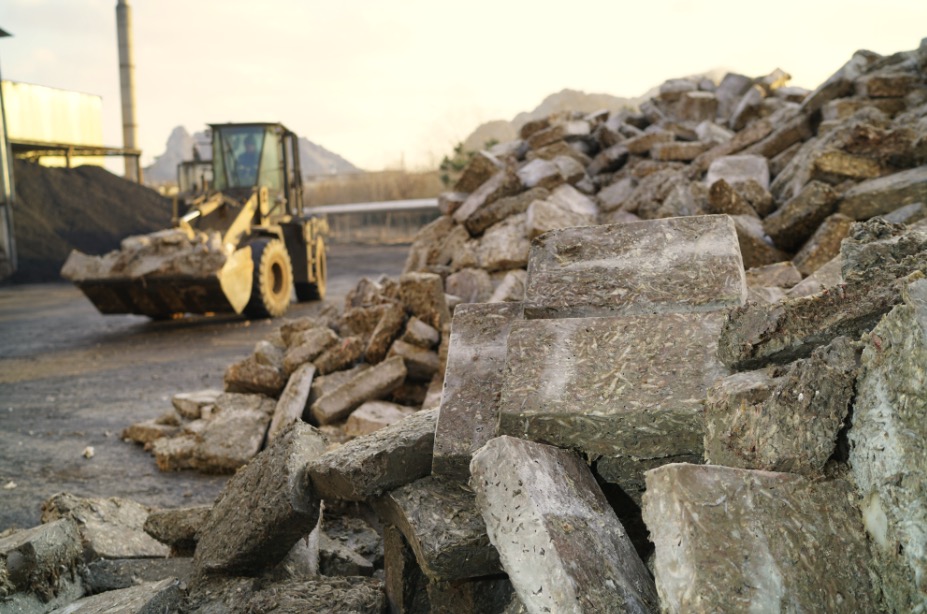 Fish too small to be sold directly are sent to a fish meal processing plant where they are frozen into slabs for storage. At a plant in Shidao, a digger is used to shift the frozen slabs into the workshop (Dec, 2016). Photo: Greenpeace/Zhu Li 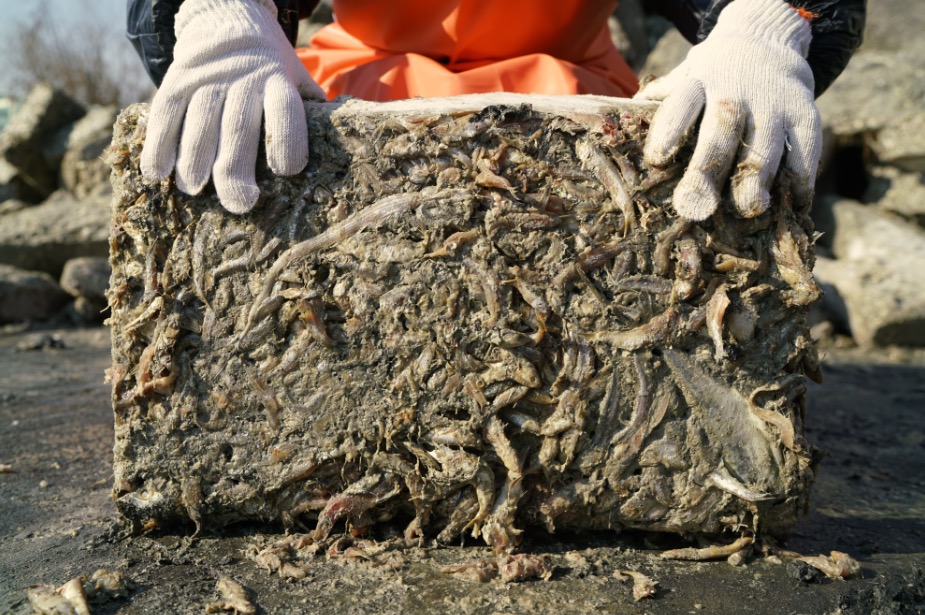 The FAO pointed out that continued use of bottom trawlers and other netting techniques to catch trash fish threatens the very foundation of the food chain. Since 2007 catches in the Mediterranean and Black Sea have fallen by almost one third, due in part to falling populations of fish at the bottom of the food chain, such as sardines and anchovies.

The FAO also pointed out that alongside small low-value fish, bycatch often includes the young of many commercial species. As part of its investigation, Greenpeace examined the fish found in bycatch – 38% were juveniles of commercial species. The long term effect of such bycatching will do more economic harm than good.

It is possible for fisheries authorities to take action to combat the misuse of bycatch. The FAO suggests fishing vessels avoid spawning and hatching periods, and that bottom trawling is banned in certain areas.

China is starting to realise it has a problem. The reduction of use of chilled trash fish in aquaculture, increasing the use of fodder, cracking down on illegal trading in trash fish – these are all focuses for the Ministry of Agriculture’s fisheries work in 2017.

The measure of Chinese aquaculture

But fisheries managers are hampered in achieving these goals by a lack of data. As with fish meal output, there is insufficient information on the size of catches of trash fish.

Zhou Wei, ocean campaigner with Greenpeace, told chinadialogue that it is currently difficult to identify trash fish catch quantities because they are made up of a range of different species, many of which are not tracked. There is also no data on the trading of these species.

“Improving these statistics is a focus for the fishery authorities currently,” said Zhou. “Better catch and trade figures would be hugely helpful for fishery management.” 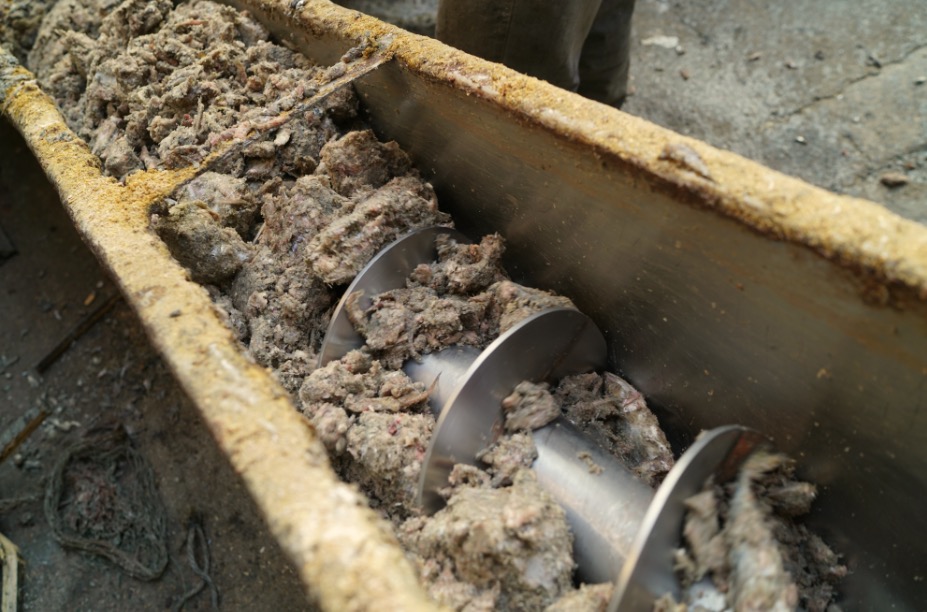 The machines at a fish meal plant crush the frozen slabs of feed fish before processing (Dec, 2016). Photo: Greenpeace/Zhu Li 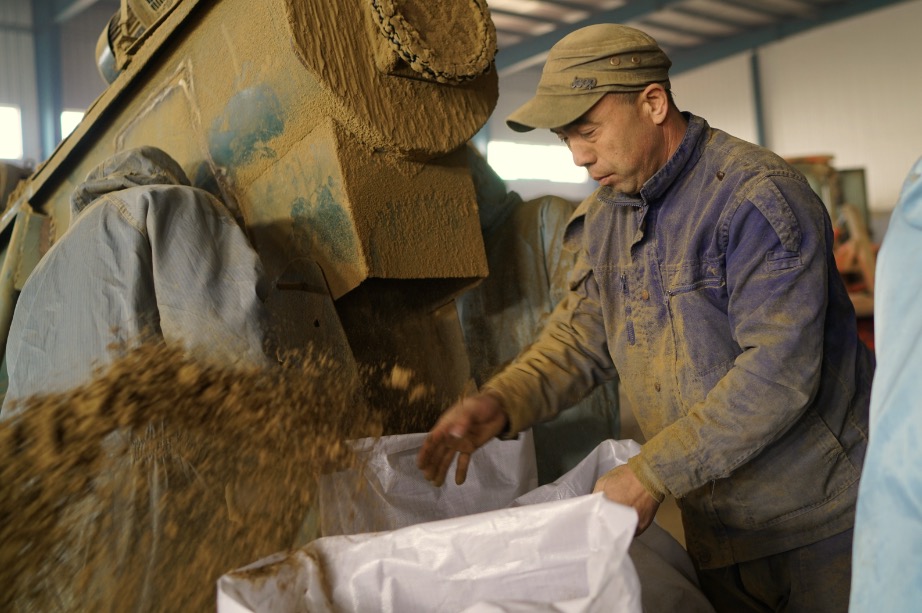 A worker at a Shidao fish meal plant is covered in fish meal. The informally-run small processing plants have a stench that most people would find unbearable (Dec, 2016). Photo: Greenpeace/Zhu Li

In the report Zhou recommends the Chinese government to include trash fish in catch statistics and to reduce the catching of such fish. Meanwhile changes can be made in farming practices to increase the use of fish meal, or fish meal alternatives, instead of using unprocessed trash fish as a direct food source.

Wang Zhenhua of Shanghai Ocean University told chinadialogue that the revision of China’s fisheries law in 2000 proposed a cap on catches. But calculating available fish stocks is a huge challenge and so it has not been possible to give accurate figures on what catch sizes are sustainable.

To address the problem, China’s feed producers are using novel techniques to bring new hope to the industry globally.

Kevin Fitzsimmons, a professor at the University of Arizona, and other aquaculture experts have set up a prize for development of a fish-free feed. A Chinese firm, Guangdong Evergreen Feed Industry Co. Ltd., is currently global leader in such sales.

Cheng Chengrong is in charge of research and development at Evergreen Feed. Via email he told chinadialogue that the company has been working on fish-free feed for years. He also explained that sale of fish-free feed during the period of the competition accounted for 16% of the company’s total, and that feedback from customers had been positive.

Due to the high protein content and specific nutrients in fish meal, it would not be possible to end its use in fish farming altogether. But feed manufacturers have been trying to reduce its use. 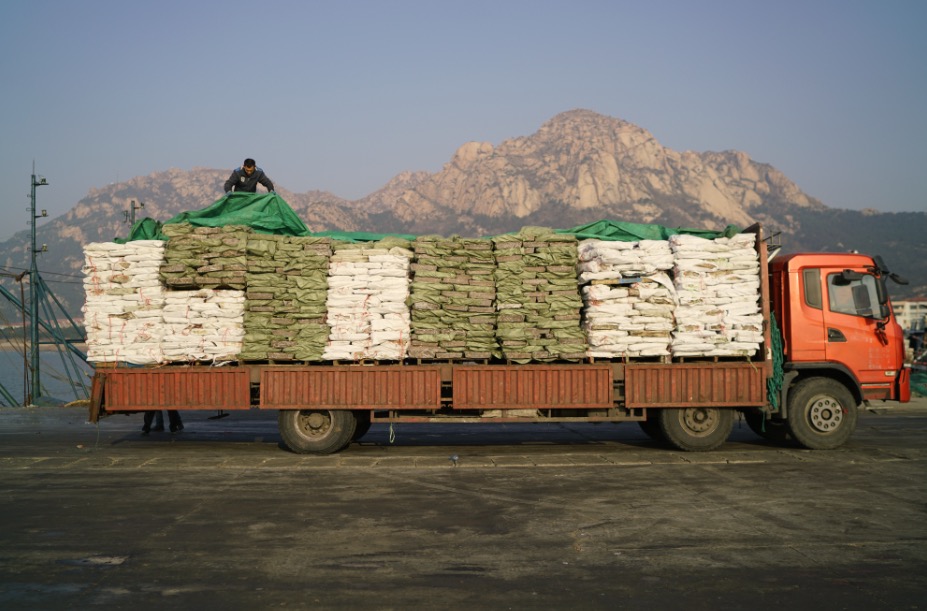 These feed fish have been sorted, frozen and loaded for transportation. A 400 horsepower 30-metre twin rig trawler can catch over 20 tonnes of feed fish on a ten-day trip, enough to load seven or eight of these lorries (Dec, 2016). Photo: Greenpeace/Zhu Li

The manufacturers could also make more use of trimmings from fish processing to reduce reliance on ocean catches. Fitzsimmons said that on average only 10-15% of the raw material for fish meal production globally comes from trimmings – the rest is from ocean-caught fish.

China’s pathway towards more sustainable fishing practices may lie in learning from the experiences of other nations as well as understanding its own sector better.