An index launched in February this year scores countries according to their degree of exposure to and quality of response towards illegal, unreported and unregulated (IUU) fishing. China received the worst score out of 152 coastal states assessed worldwide.

This is a key finding, given that China is in many respects the most important fishing nation on the planet, conferring its flag to a vast fleet of thousands of fishing vessels and fish carriers, operating not just within the Chinese exclusive economic zone (EEZ) but across all major ocean basins. China is also one of the three most important global seafood markets, ranking as the top seafood exporter and third-largest importer.

IUU fishing robs economies and societies of catches worth billions of dollars each year. It has huge environmental impacts on fish stocks through impairing scientific research and fisheries management efforts. It helps prevent governments and regional fisheries management organisations from achieving sustainable fisheries. The elimination of IUU fishing is an internationally agreed target under the UN’s Sustainable Development Goals.

Although IUU fishing is not the only phenomenon to blame – ineffective fisheries management and “bad” subsidies also play their part – it is a key issue for the global community to solve if fisheries are to be substantially improved.

A basis for comparison

The new index was developed by Poseidon Aquatic Resource Management, a fishery and aquaculture consulting firm, and the Global Initiative Against Transnational Organized Crime, a Geneva-based NGO network of experts focusing on crime in human rights, democracy, governance and natural resource exploitation.

The index provides a measure of the degree to which all coastal states are exposed to IUU fishing, and how they respond. While the scores indicate the risk of IUU fishing they do not provide a metric for establishing actual levels.

The index consists of 40 indicators, based mostly on published information, but also on a short survey. Individual indicators are weighted as low, medium or high, depending on the strength of their apparent link to IUU fishing.

Each indicator falls into four groups of “responsibilities” – coastal, flag, port and general – and one of the three “types” – vulnerability, prevalence and response to IUU fishing.

Countries are given a score out of five across their responsibilities and types (one being the best, and five the worst). The index provides a new basis for comparing nations.

Scores serve to identify weaknesses where immediate action to combat IUU fishing is required. However, points of poor performance need also to be addressed outside of the index, as its indicators only embody a limited range of factors.

The index is a tool that can be used to identify broad areas of better and poorer performance at national and regional levels, and shine a light on those countries, regions and responsibilities where action would be most beneficial.

The index reveals that China faces its most formidable challenges as a flag and a port state, where it ranks as the worst performer globally. Its ranks in the coastal state and general group of responsibilities are marginally better (13th and fourth respectively). 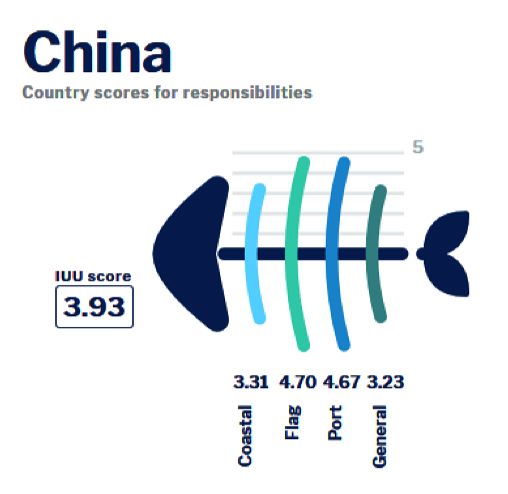 Its vast and global fleet of fishing vessels makes it particularly prone to infringements in far-flung corners of the world. Chinese vessels continue to be seen as a driver of IUU fishing globally, based on the number of them on IUU lists, the views held by fisheries observers, MCS (monitoring, control and surveillance) practitioners, and the number of negative news items appearing in the international press.

In terms of response, China falls short on proactively engaging with the international community to meet its responsibilities. It also has a poor track record of complying with the flag state obligations of regional fisheries management organisations. Instead of emerging as an international leader, China is seen by many as a rogue flag state exploiting global fisheries without regard for international frameworks – regardless of whether these be binding, voluntary or suggested best practice.

As a port state, China obtains its second poorest score (4.67). Vulnerabilities relate to the vast number of fishing ports requiring oversight, and the large number of foreign fishing vessels making port calls – also requiring dedicated monitoring. The prevalence of IUU fishing-related transactions taking place in Chinese ports is deemed to be very high, a perception partly driven by China’s limited proactive response. China is not a party to the 2009 Port States Measures Agreement, has not designated ports to which the entry of foreign fishing vessels is limited, and its compliance with the port state obligations of regional fisheries management organisations is also weak.

Vulnerability and response scores are not combined in the overall index score. If China’s weak response as a flag and port state had been cross-linked with its high vulnerability scores in the same domains of responsibility – a reasonable approach from a total risk-quantification perspective – its overall score would have been even worse.

When looking at risk types overall ­– all responsibilities combined – China scores worst on both vulnerability to and prevalence of IUU fishing. While the gap on overall vulnerability between China and the two “runners-up” (Japan 4.28 and Russia 4.22) is relatively small, the gaps for overall prevalence (4.19) to the second-ranked (Taiwan 3.56) and third-ranked (Vietnam 3.11) are immense – underscoring the enormous and rather unique risks of IUU fishing that confront China. In terms of the overall response score (3.37), China is ranked 22nd, and with a rather wide gap separating it from the worst performer (Singapore 4.29).

The overall analysis yields a picture in which the exposure of China to IUU fishing (vulnerability and prevalence) are of the highest order globally, while its response to address these risks – overall – is largely underwhelming.

Should and could take action

There is a limit to the action that can be undertaken to mitigate vulnerability to IUU fishing. Some factors, like the size of China’s exclusive economic zone, cannot be effectively mitigated. Others, like the resolution of grey areas, or the number of fishing ports generally take a long time to effectively address.

However, the index clearly shows that China could and should take action to vigorously upgrade its weak and insufficient approach, in some clearly identified areas, to reduce both vulnerability and prevalence of IUU fishing risk.

On the international stage, China – as a flag state – has an immediate stake, responsibility and duty to act firmly and with resolve to fishing vessels flying its flag, including under the auspices of regional fisheries management organisations, and more generally under the provisions of international law, ensuring that their operations comply with applicable norms and rules.

Given China’s growing consumer market and demand for seafood, the need for developing and implementing effective port state measures, as well as market-based tools and measures to address IUU fishing and trade in IUU products, is likely to rapidly grow in importance in the years to come.

Argentina, the next battleground for illegal fishing

Tackling the trade in endangered species