April was a “closed season” for industrial fishing in Sierra Leone, in a bid to prevent further depletion of dwindling fish populations. But as simple as introducing a month-long ban may seem, it has taken the country decades to get there.

Sierra Leone has one of the richest fisheries in West Africa. But populations have plummeted since the 1980s when fleets from countries as far away as Spain, Korea and the then Soviet Union began to exploit the waters. Today, it is China that accounts for 75% of Sierra Leone’s industrialised fleet.

The volumes of fish being caught legally are huge. Just one trawler can catch up to 100 tonnes in a day by dragging a net along the ocean floor to harvest bottom-dwelling species of fish and shellfish. Small-scale artisanal fishing fleets, in comparison, which fish to feed local communities, catch around just 17 tonnes a year. 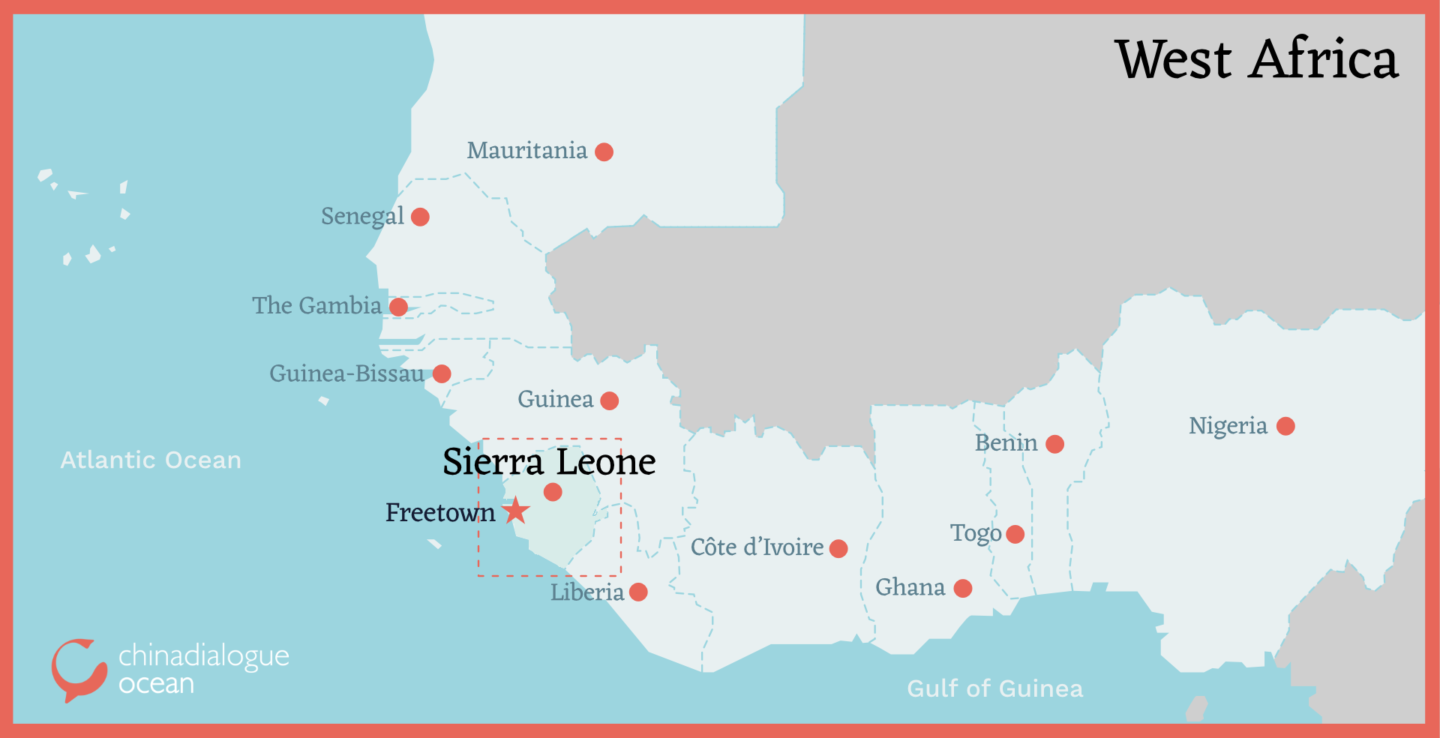 Industrial trawlers often pay small licence fees and take more fish than they declare. They use their bigger nets and wider access to outcompete local fishermen, and they provide little to no benefit to the local economy since their catches are sold elsewhere.

With vessel monitoring data showing trawling hours to have increased by more than 30% between 2016 and 2017, the situation is set to get worse.

Sierra Leone’s troubles have been further compounded by IUU – vessels engaging in behaviour that is illegal, unregulated and unreported. Catches are going undeclared, not all boats are fitted with tracking technology, and the country lacks the resources to enforce any regulations, with just a single patrol boat for the 400,000 square kilometres it has to monitor.

Pair trawling, where two vessels together drag a huge net behind them, is illegal in Sierra Leone but a BBC documentary released in March showed it remains a big problem.

All of this is taking away national revenue and preventing local people from developing their own industry. It is estimated that Sierra Leone has the potential to earn more than US$50 million a year from its fisheries, yet it ends up with less than $18 million because of illegal fishing and lack of policing. China’s fishing fleets are taking advantage of weak enforcement in Sierra Leone with devastating effect.

A race to the bottom

Professor Percival Showers, who has worked in the national fishing industry for more than 40 years, has repeatedly warned that Sierra Leone’s “territorial waters have been invaded” by trawlers.

“The vessels come and carry huge tonnes of fish and go away,” says Showers, who heads the Institute of Marine Biology and Oceanography at the University of Sierra Leone. “This [bottom trawling] method of fishing causes the government to lose millions of dollars … A single trawler can catch up to 100 tonnes per day … Just imagine how much [the fleet] catches per day.”

Industrial fishing has not been paused in Sierra Leonean waters for over three decades. A one-month ban may not achieve much, but it could be the start of progress, together with a national effort to estimate the amount of fish left in the water.

So far, according to Showers, who is leading the stocktake, there are indications that Sierra Leone’s waters are losing species richness, volume and value.

“I would say they are at critical levels and the government has to do something immediately,” he says. “Last year, the World Bank brought a project [for us] to … come [up] with new fresh estimate of the level of fish in the water … The preliminary [finding] shows that we are approaching a critical level.”

Along with the ban comes a reported refusal by the government to renew licences for the Chinese fleet on the basis of poor sanitation onboard their vessels. While most of their fishing vessels are legal, many do not report their catches and are not regulated effectively. Their vessels are accused of breaking fish stock protection rules, such as by using smaller mesh sizes in their trawler nets, and even mosquito nets, to catch younger fish.

During the course of the industrial-fishing-free month, parliament ratified two UN agreements which seek to increase fish exports to the EU market, which is better regulated, and to prevent IUU fishing in Sierra Leone waters.

The first is an agreement to promote compliance with UN international conservation and management measures. It will ensure that fishing vessels flying Sierra Leone’s flag on the high seas face sanctions if they break the law. It will also see Sierra Leone exchange information with the UN’s Food and Agriculture Organisation, including vessel type, name, registration number, port of registry, and owner name and address.

The second relates to the conservation and management of the highly migratory fish populations Sierra Leone shares with neighbouring countries.

Sierra Leone’s minister of fisheries and marine resources, Emma Kowa-Jalloh, told parliament that the ratification of these two measures would guarantee a fair ride for fish caught in Sierra Leone into the EU market, which because of its better regulations would benefit the country financially.

A chance to breed

There has been much debate surrounding the ban and its effectiveness. Showers approves of the action, which he thinks was imposed due to mounting pressure. “[It] surprised many countries around the world,” he said.

John Obie, the harbourmaster at the Tombo artisanal fishing landing site, 50 kilometres east of the capital, Freetown, shares this view. He praised the ban, saying fishers have noticed changes within the one-month period as most of the fish now caught could be seen with eggs, a hopeful sign for the replenishment of populations.

“We are looking forward to a two-month ban by next year so that every Sierra Leonean would benefit from our waters,” says Obie. “I appreciate the minister a lot because she does call us to negotiate on any decision she wants to take. This has not been happening before now.”

But one of the artisanal fishermen at Tombo, Mohamed Mansaray, said he is yet to see the impact of the ban as he still has to travel miles from shore to get a good catch. “Perhaps, in the long run, we will see the impact. I just landed today, after taking about four days on the sea. Look at the catch I have,” he said, pointing to a small heap of fish on the ground. “No changes.”

With the ban now over and Sierra Leone waiting to see whether ratification of international agreements will have any effect, fishery policymakers have several possible courses of action. They could endorse 2017 recommendations to nationalise the ownership of fishing vessels and require all catches to be landed on home shores. They could also consider implementing World Bank recommendations to limit fishing to within replacement levels, and to issue and publish fishing licenses each year to increase transparency.

Though the fishery ministry has started publishing a list of licensed vessels, Showers says more time is needed for the stock estimate to be completed before any recommendations can be made to the government. He wants to see the government control the number and size of the vessels they licence and impose a no-go area offshore where fish can breed.

But there is a wider and more immediate concern. Harbourmaster Obie claims “there are some corrupt officials in the ministry that are undermining the decision of the minister.” He says a letter was sent by someone in the ministry encouraging companies that buy fish for foreign markets to start trading just one week into the month-long ban.

Though fishers in Tombo stood their ground, waiting to hear directly from the minister or the vice-president, Obie says this is just one example of how fishers have been subjected to “only working for the exporters”.

Can blue finance save the oceans?