A new study on saiko fishing has for the first time put a value on the cost of the destructive fishing practice, which is being driven largely by Chinese trawlers and is devastating Ghana’s overexploited fisheries.

An investigation by the London-based Environmental Justice Foundation (EJF) has confirmed earlier estimates that in 2017 saiko fishing – the practice of trans-shipping fish at sea from industrial trawlers to specially adapted canoes – took around 100,000 metric tonnes of fish.

New data has enabled the EJF to calculate that the catches were worth USD$41-51 million at sea, with much of this money flowing straight into the hands of mostly Chinese fishing companies and out of Ghana, the report claims. Once landed, the fish were sold for $53-81 million – a profit of $12-30 million for the local gangs.

Ghana’s total industrial catch for the year was 167,000 tonnes. Saiko accounted for 100,000 tonnes of that, meaning just 40% of trawler catches were landed legally. Estimated landings of industrially trawled fish were also equivalent to the entire artisanal (small-scale) fleet, and nine times the target set out in its 2014 fisheries management plan (18,500 tonnes).

Overall, the figures show that the impact of the industrial trawling fleet on Ghana’s maritime fisheries resources has been severely underestimated.

Kofi Agbogah, the director of Hen Mpoano, a Ghana-based NGO that co-authored the report, said: “Saiko is sucking the heart out of Ghana’s fisheries. The incomes of small-scale fishers have dropped by as much as 40% in the last 10 to 15 years, and Ghana is now forced to import more than half of fish consumed. Trans-shipments of fish at sea are notoriously difficult to monitor, even with the most advanced systems in place. Instead, all catches should be landed in authorised ports and recorded in official statistics.”


The original term was “saite” and dates back to the 1970s when it was used by Japanese fishermen to describe the “bad/rubbish” fish that their trawlers were discarding. But the locals saw the value of the bycatch and insisted it was “saiko”, meaning “good/useful” fish.

Saiko began as an informal trading system where unwanted fish caught by industrial vessels were exchanged at sea for goods brought by canoes. It has since evolved into a highly organised, illegal and lucrative industry where industrial trawlers – licenced only to fish for demersal (bottom-dwelling) species – target fish specifically for the saiko trade. This includes small pelagic species, such as sardinella and mackerel, which are in high demand for local consumption and have been fished to the brink of collapse. The frozen blocks of saiko fish are then sold to local people.

“Saiko allows industrial trawlers to effectively steal the fish from small-scale fishers, before selling it back to local communities at a profit,” the report says.

Experts warn that saiko is contributing to overfishing and the rapid decline of Ghana’s inshore fishery, on which more than two million people depend for their livelihoods. It is prohibited under Ghanian law, attracting fines of between $100,000 and $2 million. But there has recently been a bid to make the practice legal under supervision.

Landings of sardinella, anchovy and mackerel in decline as number of artisanal canoes increases


“Saiko is precipitating the collapse of Ghana’s staple fish stock and with it, poverty and hunger for its people,” said EJF’s executive director, Steve Trent. “Chinese trawlers are making millions of dollars in an illegal trade which makes up over half of the fish caught by industrial boats in Ghana. This is an ecological crisis that is bringing about a human one as local communities are deprived of livelihoods, income and food security.

“But, it is absolutely clear that the government has the ability to stop this illegal and highly damaging activity now and equally clear that it must do so without delay if it is to prevent the decline or collapse of these fisheries.” 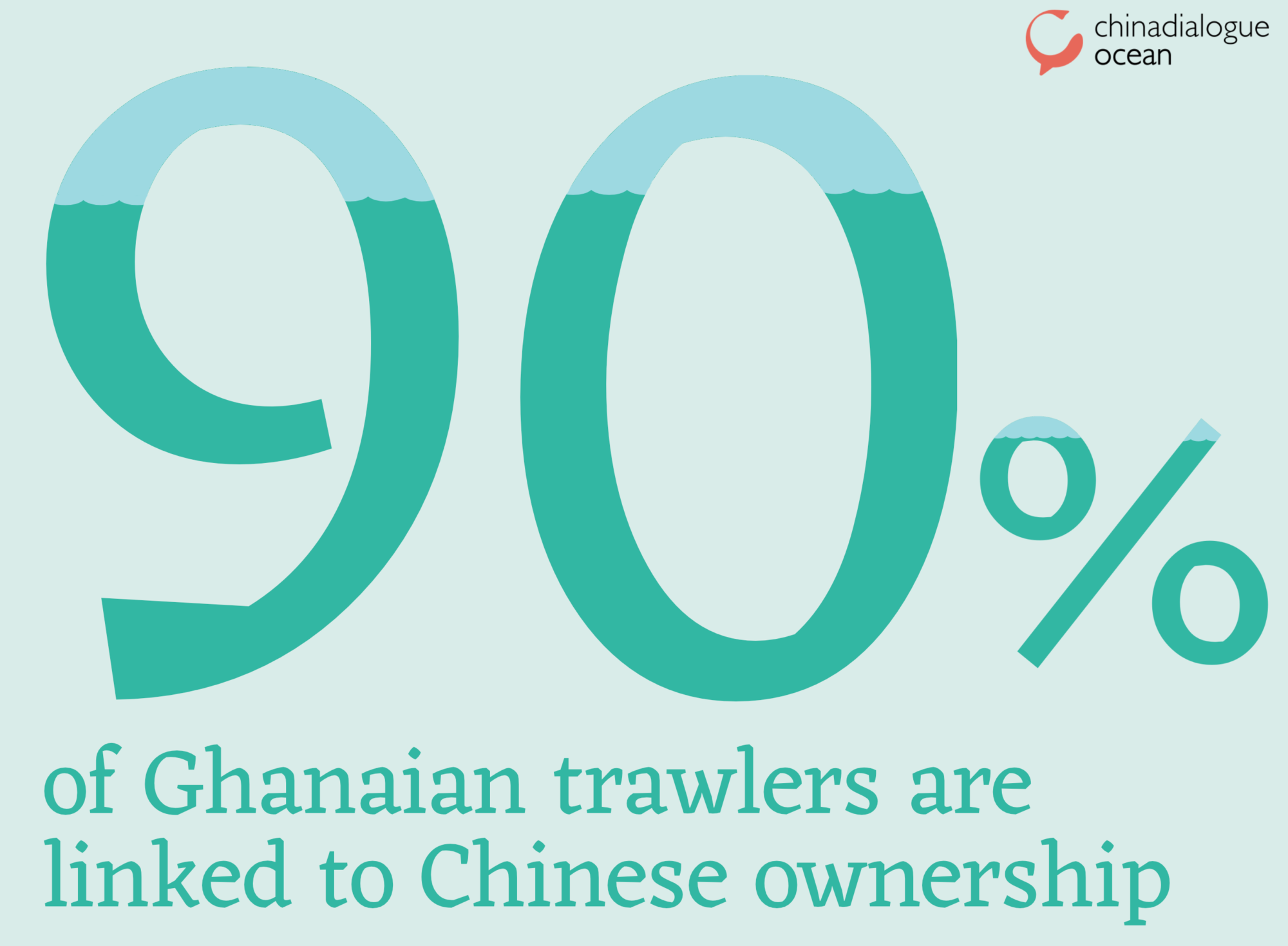 In 2002, Ghana passed a law forbidding any foreign ownership or control of vessels flying its flag in a bid to retain more revenue from its fisheries. But last year an EJF investigation revealed that around 90% of Ghana’s industrial fleet is linked to Chinese owners, who use “front” companies to import their vessels and obtain licences to fish. Opaque arrangements then shield the foreign partner from scrutiny.

China has the world’s largest distant water fleet and represents the largest fishing presence in West Africa. Its flagged trawlers, along with vessels from European member states including Greece, Italy and Spain, have been caught engaging in illegal, unreported and unregulated (IUU) activities. China was recently ranked as the worst IUU offender in a global index of 152 coastal states. In recent years, Beijing has been cracking down by cancelling subsidies and revoking the licences of offenders. However, the state continues to support its distant water fleet with subsidised fuel and tax exemptions.

In West Africa, IUU and overfishing is exacerbated by corruption and a lack of enforcement and regulation, leading to an annual loss of revenue for the region of $1.3 billion.

The EJF’s on-the-ground investigation filmed illegal activity, monitored ports and analysed data for its report “Stolen at Sea: How illegal ‘saiko’ fishing is fuelling the collapse of Ghana’s fisheries”. An estimate of the saiko catch landing had been made in earlier reports, but this is the first time the ecological and socioeconomic impact of the practice has been calculated. 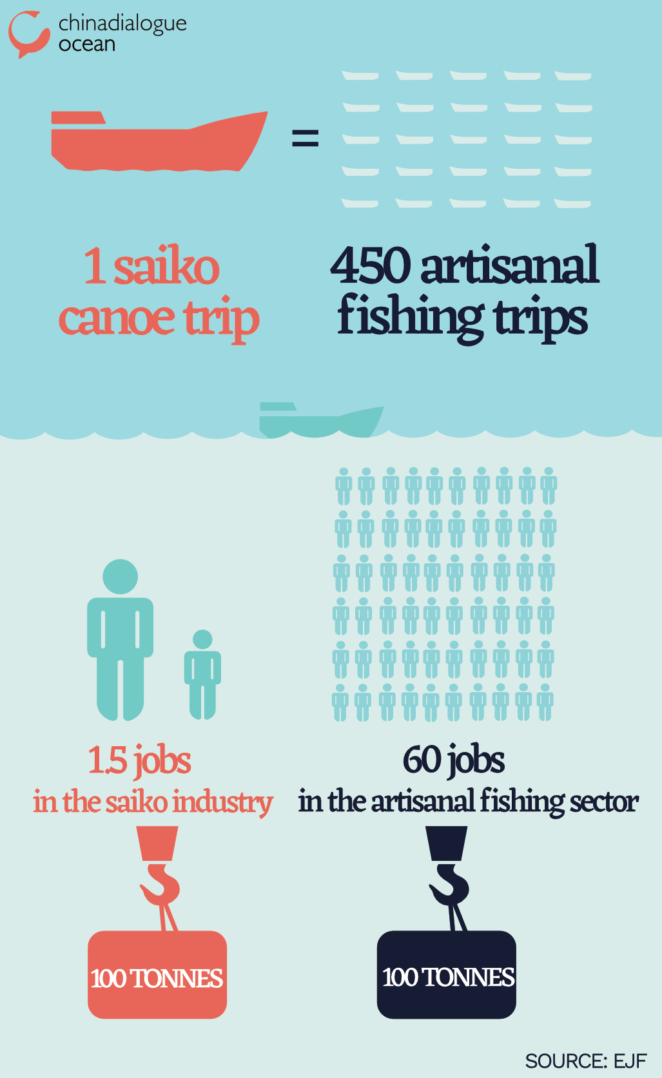 Saiko has severe implications for Ghana’s artisanal fishing sector, most notably through job losses. The specially built “saiko canoes” that take the fish from the trawlers back to ports carry 450 times the average catch of traditional fishing canoes and are operated by only a few individuals. The report calculates that while canoe fishing offers direct employment for around 60 fishers for every 100 tonnes of fish, saiko means only 1.5 jobs per 100 tonnes – 40 times less.

However, Professor Wisdom Akpalu from the University of Ghana said he did not agree with the job-creation narrative. “The fact is that the artisanal fisheries are overcapitalised and the small pelagic stocks are overexploited. We should not create the impression that more jobs will be created, if saiko ceases.”

The report says saiko also undermines any efforts to rebuild the country’s severely depleted small pelagic fish populations through measures such as closed breeding seasons. After much debate, a closed season for the artisanal fishing sector took place from 15 May to 15 June 2019. “But any biological gains from this closed season will be dwarfed by the damage done from saiko,” the report says.

More than 60% of the saiko catch analysed by EJF from October 2018 to April 2019 was found to be juvenile fish, which when harvested at an early stage can severely impact the capacity of the populations to replenish.

The report recommends nine measures that should be immediately acted upon, including clarifying saiko’s legal status; investigating all suspected cases of saiko; working with the government of China to identify beneficial owners; and introducing strict conditions to prevent trawlers from targeting pelagic species.

“With saiko landings valued at more than $50 million annually, and with much of this benefit accruing to vessels with Chinese beneficial ownership, eliminating the practice should result in at least part of this revenue being captured by the artisanal sector and the economic benefit staying in Ghana,” the report concludes.