Along the shore of northern Java, the most densely populated island in Indonesia, they thought they had it made back in the 1980s, when the craze for turning mangrove swamps into prawn ponds took hold. Prawn prices were high. Village after village took the bait. “We wanted to raise some income and feed our families”, says Maskur, a teacher in Wedung, a large village on the River Wulan.

But now they are living with the consequences. The loss of their protective coastal strip of mangroves triggered an invasion by the sea that has engulfed many of their ponds in the past two decades, and eaten into the rice fields further inland.

“We’ve lost 500 metres to the sea in the last 10 years,” said Maskur, as our boat headed out into a bay unmarked on any maps. We passed the submerged remains of banks that had once surrounded village ponds. “I bought 10 hectares of ponds here in 2004, but three years later they were swept away,” said village official Nor Khamed.

Now the villagers are desperately trying to restore their mangroves, working with the Netherlands-based environment group Wetlands International to replant and erect brushwood barriers offshore that they hope will capture silt and hold back the eroding waters.

Across much of south-east Asia, the prawn bonanza is over. Many ponds, like those in parts of northern Java, have been plagued by coastal erosion. Others have been hit by diseases. And governments are clamping down on mangrove destruction to protect their coastal ecosystems.

But other forms of coastal aquaculture continue to surge round the world – from salmon cages in Norwegian fjords to backyard ponds stuffed with catfish across the Mekong delta, and oyster beds in Florida to carp pens off the coast of China.

Often they too have serious environmental impacts. Open-water fish pens may not physically displace mangroves, but they can damage sea grasses and coral reefs by polluting the ocean with fish excreta, undigested feed and antibiotics. The penned fish can also damage wild fish populations if they escape and compete for food or damage the genetic integrity of their wild hosts by interbreeding.

So what now? Marine aquaculture is not going away. The world has to be fed. Aquaculture is the world’s fastest-growing source of food, and will soon exceed wild fish catches. Output is likely to double by 2050. Most of that growth is likely to be in Asia, which already conducts 90% of global aquaculture, and especially China, which is alone responsible for 60% of production.

Will it be on land or at sea?

Currently, around 60% of aquaculture still takes places ashore, and occupies around 20 million hectares, an area the size of Syria. But with both spare land and freshwater running out, a move to marine aquaculture is under way – with potentially devastating environmental consequences. Aquaculture has already been a major cause of environmental damage to coastal China, which has seen the loss of more than 70% of its mangroves and 80% of near-shore reefs.

So is this a looming environmental disaster, in which market forces and the world’s need for ever more food overwhelm environmental prudence?

Maybe not. Remarkably, some environment groups have high hopes that now is the moment to begin the long march to sustainable aquaculture. Groups like the Nature Conservancy (TNC), a US-based group with strong links to the private sector, are staking their reputations on it, calling not for a drawdown on aquaculture but for greater investment to bring in new techniques. The key, it argues, may lie in basing marine aquaculture in open water some distance from coastlines.

These optimists say that aquaculture already has a lot going for it. Most farmed fish have a much smaller environmental footprint than beef, for instance. Salmon aquaculture can convert almost all its feed into new protein, whereas the ratio for beef is 8:1.

But the case is not just that aquaculture is less bad, says Robert Jones, global lead for TNC’s aquaculture programme. “Done well, [aquaculture] can be a force for ecological and social good,” he writes in a report published in May by TNC and Encourage Capital, a New York-based investment firm.

The report calls aquaculture a “huge opportunity” and makes the case for a “blue revolution” to catalyse private investment in sustainable kinds. Jones reckons up to $300 billion will be invested in the industry globally in the next decade. So the trick will be to capture that investment for sustainability.

TNC sees three opportunities, two of which are marine.

The first is to move fish farming away from fragile and often densely populated coastal environments. It should increasingly go offshore, where less habitat is at risk and pollution can disperse on the currents. Cages at sea can also maximise productivity, with some delivering as much as 500 tonnes of fish per hectare each year.

Such offshore fish farming could even bring gains for marine life. “There is substantial evidence that a wide variety of fauna live or gather in and around mariculture farms,” says Rebecca Gentry of Florida State University. Though critics say it is not always clear whether the farms are increasing populations or simply attracting species away from their natural habitats. 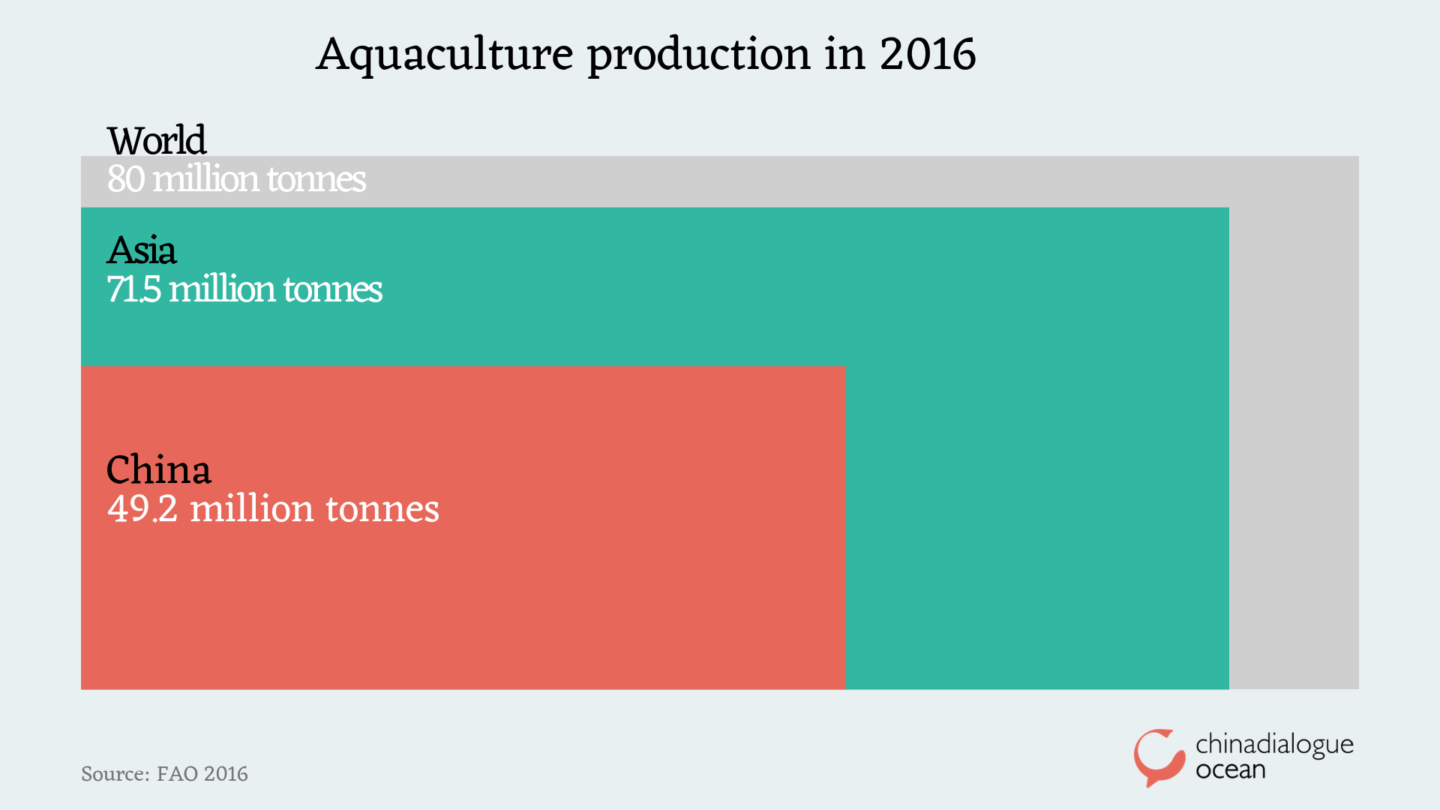 A second offshore opportunity identified by Jones is investment in culturing shellfish such as oysters, clams and mussels, as well as seaweed, which is finding new markets in cosmetics, animal feed and biofuels. Advocates say these crops can benefits ecosystems. Shellfish beds provide habitat for other creatures, mop up pollution and stabilise coastlines suffering from erosion; while seaweed production can both form marine habitat and mitigate climate change by taking up carbon dioxide.

The only onshore opportunity suggested by TNC is growing fish in closed tanks that filter and recirculate treated wastewater – a long-mooted technology that has so far failed to take off because of high costs.

The World Resources Institute, a US-based thinktank, agrees there is scope for more high-tech aquaculture. But in a 2014 working paper, it warned that environmental gains from this approach are not a given. “Sustainable intensification is easier said than done,” said Richard Waite of its food programme. “To date, intensification has led to an increase in the use of energy and fish-based feed ingredients, as well as an increase in water pollution.”

That might change if pressure from consumers and regulators forced the industry to channel investment into cleaning up its act. The Aquaculture Stewardship Council (ASC) is a growing influence. Initiated by the environment group WWF, and modelled on the Forest and Marine Stewardship Councils, it provides certificates for good practice. It has set low-impact standards for everything from carp pens to seaweed, working to end the most damaging practices, including the current capture by China alone of 3-4 million tonnes of wild fish as feed for aquaculture. Songlin Wang, lead strategist of ASC for China and South and East Asia, says phasing this out “is a must do to rescue China’s collapsing wild fisheries.”

Such certification systems are more popular in Western consumer cultures. But the mood may be shifting in China, the world’s largest producer and market. In two recent announcements, Walmart in China said it would be selling ASC-certified salmon, prawns, mussels and tilapia. And Hema Fresh, which is owned by Alibaba, announced that it is selling own-brand ASC-certified salmon at 150 stores.

There is a long way to go, however. The ASC says there are currently just 10 certified aquaculture farms in China, producing 60,000 tonnes of seafood each year. This is not much more than one tonne in a thousand of Chinese output.

But the Chinese government is now seriously involved too. There have been numerous reports in the past two years – notably in Hainan and Hubei – of land-based aquaculture farms being summarily shut down, and their operators sometimes prosecuted for polluting rivers or illegally occupying wetlands. Most recently, the crackdown has extended to coastal prawn farms.

To keep production rising, the Chinese government is promoting offshore aquaculture. One approach is sinking artificial reefs – everything from old ships to purpose-built structures – to encourage the growth of marine life on which fish can feed. Some are enclosed areas of ocean, stocked with farmed juvenile fish.

In the past, such “marine ranches” have been constructed mainly for recreational fishing in the Bohai and Yellow seas. But increasingly they are seen as a mainstream source of food production. Last year, the Ministry of Agriculture announced plans for more than a hundred new ranches covering 2,700 square kilometres of ocean and involving 50 million cubic metres of artificial reefs.


Offshore farming where fish are either enclosed or in open water. The term can also refer to the rehabilitation of damaged habitats using artificial reefs.

A recent report from the ruling State Council called “Ideas on Accelerating the Green Development of China’s Aquaculture Sector” also points to an offshore future, backing “green offshore aquaculture development”, including automated offshore platforms. But the scale of the marine ranching initiative is raising concerns among Chinese scientists, who fear they could damage the sea bed and change the genetic makeup of wild fish populations. Wang says one marine ranch “is planned on top of a seagrass bed, a valuable fish habitat and biodiversity hotspot.”

Those critics may be pleased that, besides promoting high-tech sustainability, the State Council report also supports the continuance of traditional aquaculture systems that match low intensity with low environmental impacts.

Some are onshore. The report singles out growing fish in flooded rice paddy, an ancient technique that still occupies more than a million hectares in China. And there is room for conservation and aquaculture to work together in coastal environments, too. At Haifeng in coastal Guangdong, former wetlands that were drained for farming have now been turned into fish ponds that are managed to attract migrating water birds, including egrets and Dalmatian pelicans.

Such win-win arrangements are being encouraged by environmentalists such as Wetlands International, who are keen to find room for conservation in busy and productive coastal landscapes.

On the Indonesian island of Sumatra, in Aceh province, they blame the conversion of mangroves to prawn ponds for many of the estimated 140,000 deaths during the 2004 Indian Ocean tsunami. Since the disaster, villagers have been restoring their flooded ponds while planting mangroves in and around them, in the belief they will be better protected next time.

At Krueng Tunong, a fishing community where rescuers found more than a thousand bodies after the tsunami, a local group has planted mangroves around 20 hectares of rehabilitated ponds. “We get more fish [in the ponds] now that there are mangroves,” local leader Wahab told me. “They grow faster and in greater numbers than when the ponds were bare. I can see the juveniles hiding in the roots of the mangroves. The roots help them avoid predators. We get more crabs, too.”