Shandong and Fujian provinces recently announced they will start paying “fishery stewardship” subsidies this year to fishing boat owners based there. These will replace the fuel subsidies that have been paid to China’s coastal fishers for the last 15 years.

Those fuel subsidies were seen as a “blood transfusion“ for the fishing sector. But as they were available to all vessels, they encouraged overfishing and were considered an inefficient fossil fuel subsidy.

During WTO (World Trade Organization) talks on fishing subsidies, China has said it supports a ban on harmful payments that encourage overcapacity and overfishing, and wants to see negotiations concluded by the 12th WTO Ministerial Conference in June.

China is making the switch from subsiding fuel to rewarding responsible behaviour as part of efforts to make fishing sustainable. But as we will see, tax and finance policies such as subsidies need constant monitoring and evaluation to ensure their outcomes are in line with targets, and with the overall aim of sustainability.

Why a stewardship subsidy?

Details from Shandong and Fujian indicate the new subsidy will include two equal components: one for compliance with closed seasons, and another for fishing responsibly.

In 2017, China lengthened its closed seasons by a month to better protect fish stocks, but there have been breaches. The subsidy will alleviate the associated falls in income and make fishers more inclined to comply.

Granting of the responsible fishing subsidy depends on a wider range of factors: port entry and exit reports (hail-in/hail-out), location monitoring data, fishing logs, use of designated landing ports, protection of ocean wildlife; Fujian adds an extra factor: percentage of juvenile fish in the catch. Those indices reflect key issues China is facing in managing its fishing sector, and respond to calls in the 14th Five Year Plan to improve governance and upgrade coastal fishing.

Designated ports, hail-in/hail-out, fishing logs and location monitoring are all part of a catch-management system the government is working on. Its aim is to better monitor fishing vessels, build a catch-traceability system and ensure stewardship measures can be enforced, while also boosting the safety of maritime traffic.

The designated landing port system was first trialled in 2017, to better manage fishery stocks and quotas. So far, the Ministry of Agriculture has approved 107 national-level designated ports. Once the process of designating ports is complete, all larger fishing vessels, of 12 metres in length or more, will be required to use them. There are more than twice as many smaller boats as larger, but the larger ones hold seven times as much horsepower and the lion’s share of fishing capacity in Chinese waters.

The hail-in/hail-out system requires larger fishing vessels to report certain information to port authorities before arriving at or leaving port, giving ports a role in managing vessels and their catch. Protection of rare ocean wildlife and juvenile fish also needs to be addressed. The fishing vessels and nets crowding China’s coastal waters are a threat to protected animals, such as sea turtles, seahorses, the Chinese horseshoe crab and whale sharks. Despite prohibitions, the deliberate catching of protected species continues. And with stocks of bigger fish on the wane, fishers are turning to juveniles. In 2017, Greenpeace published a report pointing out that almost 30% of China’s coastal catch was low-value or young “trash fish”, representing huge damage to fishery stocks. 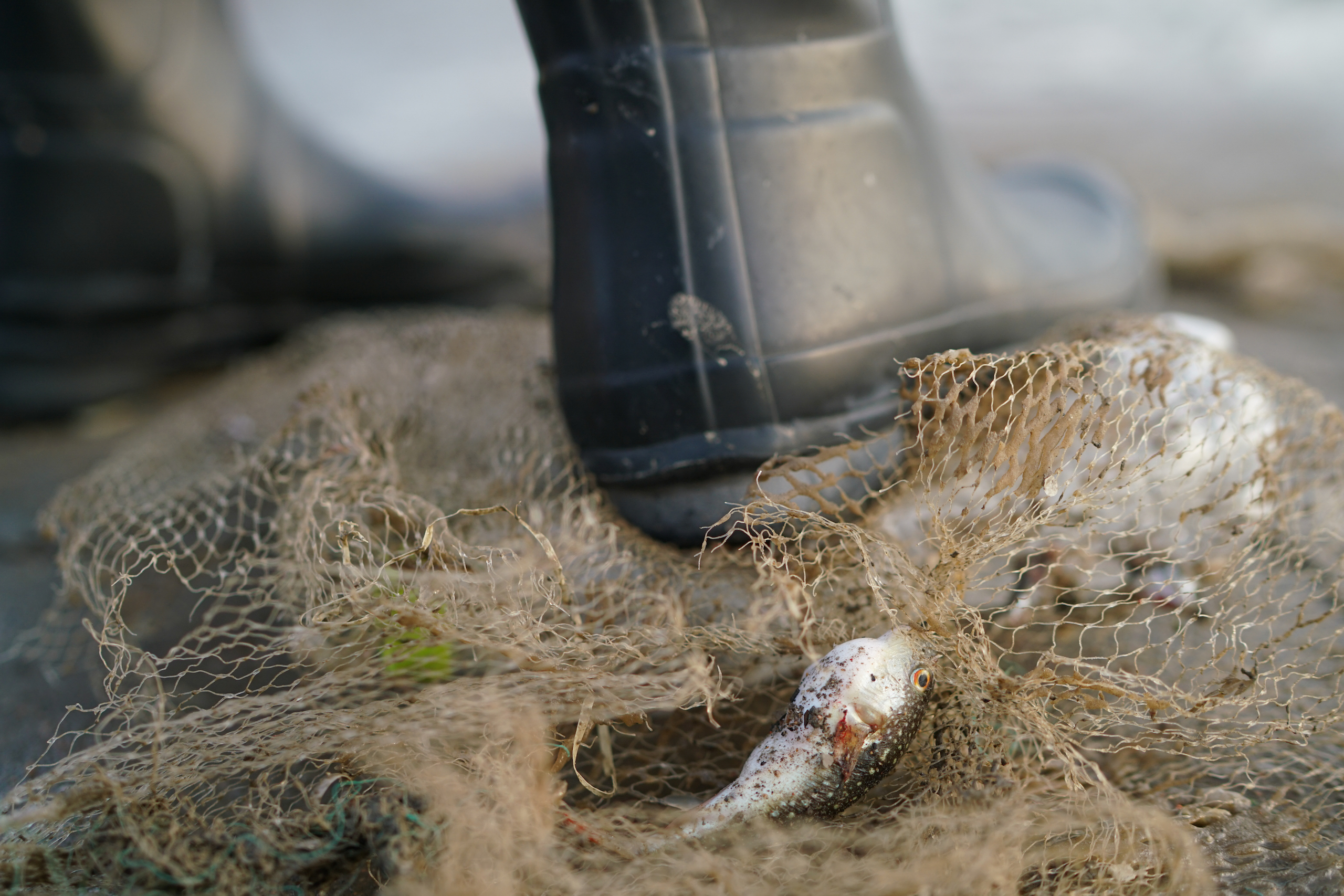 A juvenile puffer fish caught in a net at Shidao dock, Shandong. The fishing of juvenile and “trash fish” – too young or small for human consumption – is driven by demand from China’s booming aquaculture industry, which uses them as fish feed. (Image © Zhu Li / Greenpeace)

The annual limits are in line with those of the fuel subsidies after reductions were made in 2019. This will keep subsidy levels stable and avoid impacting fishers’ incomes.

The contribution subsidies make to incomes varies. A study looking at the finances of trawlers in Rongcheng in Shandong province, Xiangshan in Zhejiang, and Beihai in Guangxi, found that 5–12% of incomes were from subsidies in 2018. That percentage made the difference between profit or loss. Smaller boats are often owned and run by a single family that relies on fishing for its livelihood. Larger boats are still usually owned by an individual who serves as captain and is responsible for profits or losses.

The moves by Shandong and Fujian are towards implementing plans in the 14th FYP on fishing subsidies. Those plans also include the removal of fuel subsidies for fishing vessels, which have been in place since 2006.

The fuel subsidy originated with reforms carried out between 2006 and 2009 to bring oil prices in China in line with the market internationally, and to switch from taxes like road tax to fuel consumption taxes. That caused fuel prices to rise, and as fishers use fuel without using roads, many had to stop work due to the higher costs. The government put subsidies in place to get fishers and fishing firms working again.

At that point, the subsidy was designed to kick in when oil prices were over a 2006 baseline, and then fluctuate in line with fuel prices.

The subsidy did ease the impact on fishing and fishers, but also encouraged more intensive operations, worsening overfishing and stock depletion in China’s coastal waters. 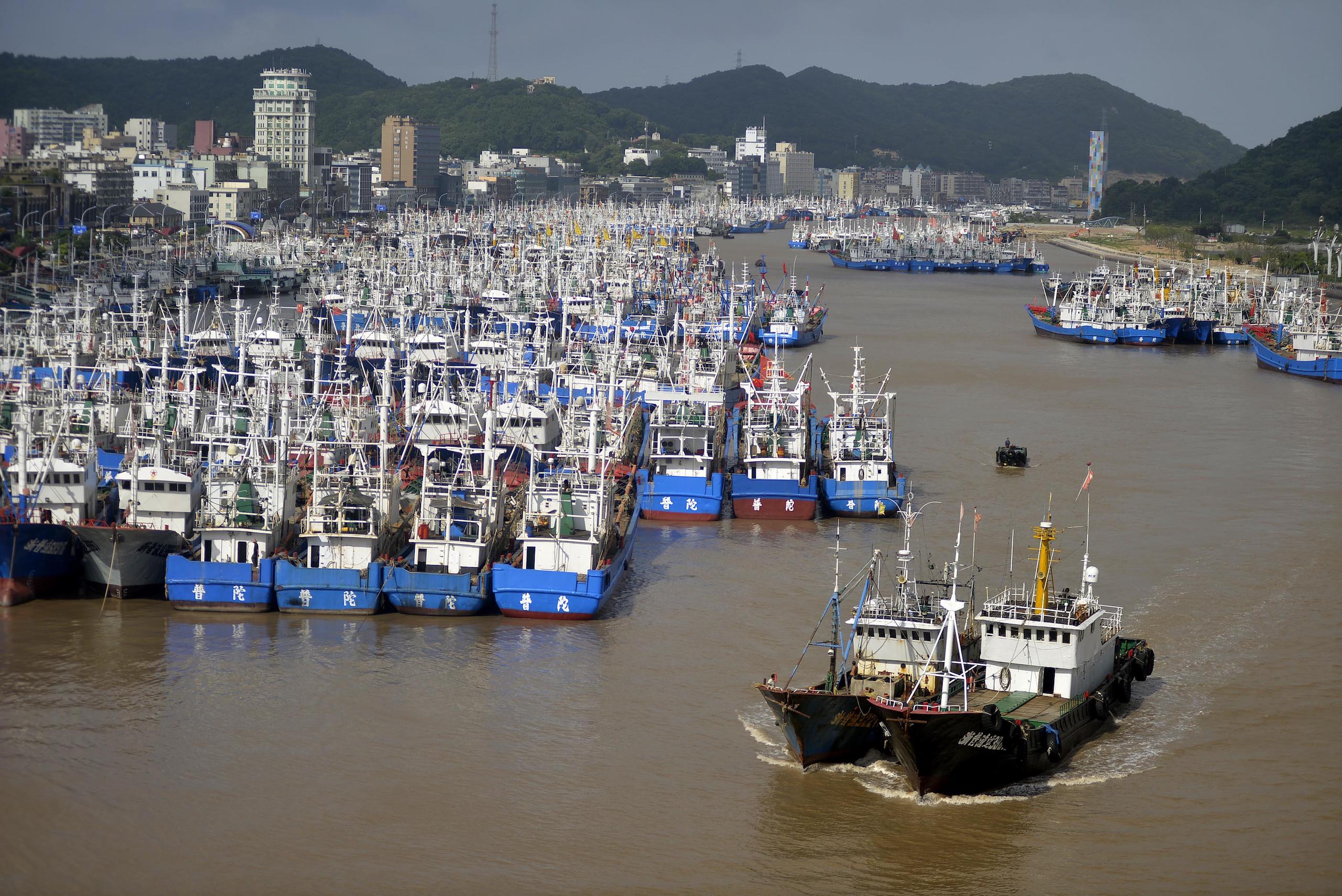 Those problems became more apparent as time went on. In 2015, the government announced changes to fuel subsidies for the fishing and aquaculture sectors. It said that by 2019 fishing fuel subsidies would drop to 40% of the 2014 level, in order to ensure that vessel numbers and total horsepower would drop by half, further improve the structure of the fishing sector, and bring fishing intensity under control.

Further changes came in May 2021 with the announcement of the stewardship subsidy. They added targets and rules on deduction which had not been in place from 2015 to 2019, meaning vessels had to tick certain boxes to get the full amount. And to get the subsidy, fishers will need to be familiar with, and abide by, fishery management systems.

The subsidies switch isn’t only driven by the need to make China’s fishing sector more sustainable: it is part of a global process. But it will still require ongoing monitoring and assessment to ensure it is promoting stability, and that problems are spotted and dealt with promptly.

First, some issues with the fuel subsidy carry over to the stewardship subsidy. For example, how does the subsidy interact with the 14th FYP’s aims to encourage fishers to change profession? Does it increase income expectations and discourage them from making that change? Moreover, as the subsidy is paid to vessel owners, complementary measures are needed to protect the interests of disadvantaged groups and fishers who do not own vessels, so the subsidy does not simply increase income disparities and cause conflict.

Secondly, subsidy indices such as the use of designated landing ports, hail-in/hail-out, fishing logs and location monitoring should be monitored constantly via technology and linked up with subsidy mechanisms, so fishers will proactively follow the rules.

Fishers should also be made fully aware of the aims of the subsidy, so they understand the differences with the fuel payments and how it will develop over time, to avoid any misunderstandings. China is making constant improvements to its management of the fishing industry and stewardship measures are starting to see results. But fishery resources remain in decline. We still need to study possible changes to fishery subsidies, in order to remove excess capacity and avoid damage to the ocean environment and biodiversity; to improve fishery management systems; to ensure that catch is in line with scientific surveys and stock assessments; and to help fishers transition to alternative work.