Globally, per capita fish consumption has doubled since 1960. The proportion of farmed fish compared to wild-caught grew from negligible to 52% of all fish for direct human consumption by 2018, according to the UN Food and Agriculture Organization. Aquaculture is hugely important for food and nutrition security, livelihoods and employment. The potential of the sector, and the role it will play in future food systems, is becoming ever more vital.

Despite freshwater aquaculture providing 77% of all edible aquaculture production (excluding aquatic plants), it has been much less published about than the saltwater equivalent. To raise awareness of its importance, Zhang Wenbo at Shanghai Ocean University joined forces with experts from institutions including the University of Stirling in the UK, Michigan State University in the US, and the World Fish Centre, to write a paper on aquaculture growth. Published in Nature magazine this March, it concluded that growth will continue to focus on land-based, freshwater operations – both in terms of the actual farming, and obtaining the resources to sustain it.

Freshwater and saltwater aquaculture are both important for ensuring global food security. They both face environmental and resource limitations, and require more technological innovation and research inputs for their sustainable development.

Two years before Zhang Wenbo’s paper, another, led by Christopher Costello from University of California’s Santa Barbara and Dr. Cao Ling from Shanghai Jiaotong University, had appeared in the same publication. It noted that as food demand rises, human activities on land could exacerbate climate warming and ecological damage. Concluding that saltwater aquaculture has huge potential for food production, it modelled a potential increase in food output from the ocean of 36–74% by 2050, with most of that growth coming from aquaculture. That would be enough to provide 12–25% of the increase in global demand for meat, according to the paper.

Zhang’s new paper stresses that the growth potential of freshwater aquaculture cannot be ignored, and will keep playing the dominant role in global aquaculture for a long time. By virtue of its relatively low cost and low technological demand, freshwater aquaculture has already proven to be an affordable, accessible and stable source of food, particularly in the global south, where most future growth of aquatic food consumption is set to occur.

Both fresh and saltwater aquaculture are seeking to grow sustainably. However, many believe that aquaculture as a whole has been marginalised in the global food system conversation. A lack of academic attention may hinder the realisation of its potential as the world population approaches 10 billion and countries strive to achieve the UN’s Sustainable Development Goals.

Responding to this lack, in 2020 more than 100 experts from 25 organisations around the world started the Blue Food Assessment. They sought to demonstrate how aquaculture contributes to human livelihood, nutrition and food security, and to motivate policy makers to pay more attention to aquatic food. In collaboration with Nature and its affiliated publications, the initiative is producing a series of papers on the topic.

Aquaculture and food security for the developing world

In the past two decades, the aquaculture sector and its value chain have been growing fast.

Zhang’s team noted that since 2000, demand for aquatic products in developed nations held steady at about 25 kilograms per person per year. This food was increasingly imported from the global south, including farmed freshwater species such as tilapia, pangasius and crayfish. Meanwhile, aquatic food consumption in countries in the global south rose from 5.2 kilograms per person in 1961 to 19.4 kilograms in 2017, mainly driven by the expansion of freshwater aquaculture. “In Southeast Asia and Africa, populations are growing fast, and so demand is too. That’s where future growth in demand will come from,” Zhang explained.

They think freshwater aquaculture – which is cheaper, involves simpler technology, lower feed demand, and is more adaptable to different environments – is a better choice for expansion to meet demand, particularly from developing nations.

We need to put more research efforts into farmed freshwater species in terms of genetics, feed and equipment, to ensure this sector can realise its potential in contributing to food security

Appropriate aquaculture methods and technology can even help low-income countries solve food shortages. By researching small fish rich in vitamins and minerals, Shakuntala Haraksingh Thilsted was able to develop a pond polyculture system which helped Bangladesh become the world’s fifth largest aquaculture producer, and significantly decrease its malnutrition rate. That sustainable approach has led to the country’s agricultural output tripling since 2000, benefiting 18 million Bangladeshis. Some Asian and African countries have adopted the same approach. In 2021, Thilsted was awarded the World Food Prize for her work.

Saltwater aquaculture also plays a role in ensuring many developing countries’ food and nutrition supply, usually in the form of shellfish and seaweed farming, which demand no feed input. For several years, China has boasted the world’s largest mariculture outputs, 70% of which are from shellfish and seaweed. 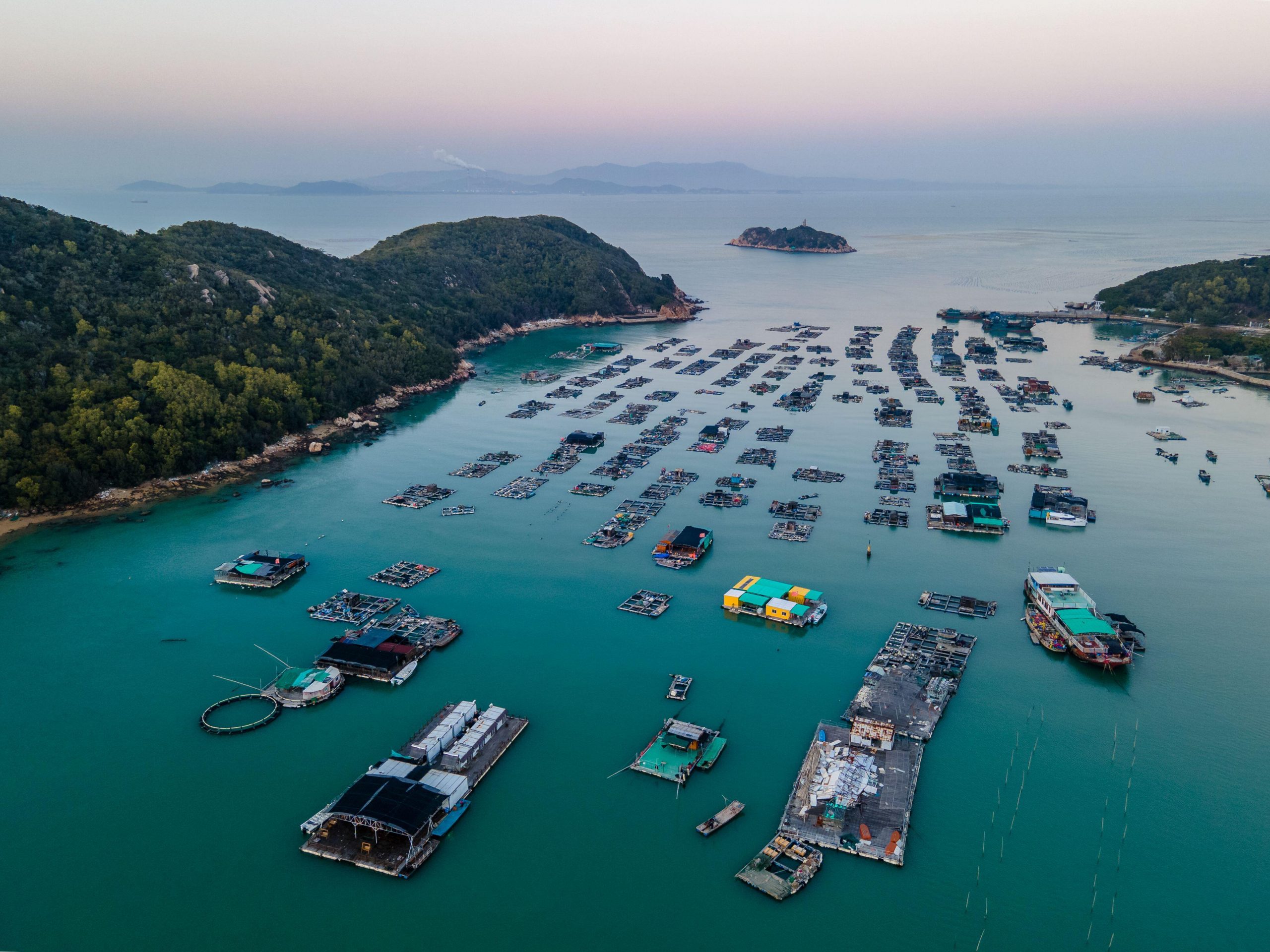 Aquaculture in Fujian province. Most of China’s saltwater aquaculture is currently concentrated in bays such as this. (Image: Zimu Liu / Alamy)

In comparison, equipment and feed for cultivating marine finned fish (such as salmon) is relatively expensive, and currently such aquaculture only exists in a few middle-to-high income countries. “Middle class consumers are the main source of demand for saltwater finned fish. And this group of consumers is increasing in China and a few other developing countries,” said Zhang Wenbo, “But in general we need to put more research efforts into farmed freshwater species in terms of genetics, feed and equipment, to ensure this sector can realise its potential in contributing to food security.”

David Little, professor at the University of Stirling’s Institute of Aquaculture, has told the media that the environmental impact of aquaculture mainly comes from producing feed. There is little difference between saltwater and freshwater aquaculture in terms of overall land and water use and impact on climate change and biodiversity, according to Little.

In 2018, output from feed-based (fed) aquaculture methods accounted for 69.1% of the total, up 13 percentage points on 2000. The proportion of fed systems in saltwater aquaculture is small, and concentrated on high-value fish for human consumption. Emphasis on protecting ocean resources has meant less fishmeal and fish oil being used in aquaculture feed, and more vegetable oils and proteins, which come from terrestrial farming.

Zhang Wenbo’s team gave the example of salmon farming. In 2016, almost 4,400 square kilometres of land was needed to supply feed for farmed salmon in Norway – ten times more than the water area needed for the actual farming.

One of the key assumptions made by Costello’s team when estimating the future potential of saltwater aquaculture was that technical innovations would provide a sustainable source of feed. Norway plans to increase output by four to five times by 2050, to five million tonnes, and is looking at obtaining raw materials from mesopelagic species, krill and zooplankton, and perhaps even grass and insects. This should reduce use of fishmeal and fish oil, and also soy, which may be in limited supply.

Although research has found that aquaculture only uses 4% of the world’s animal feed, far less than the poultry industry, the example of salmon farming in Norway shows that distribution and supply of raw materials are uneven and each country faces its own constraints.

Zhang’s research shows that most freshwater aquaculture occurs in major river basins and delta regions, where freshwater is comparatively abundant and the direct occupation of land areas is very small. Generally, resource constraints for freshwater aquaculture are no worse than for saltwater, and can be solved by horizontal expansion, intensification, and more efficient use of resources. All that is needed is more targeted research.

China: Best of both worlds

China is the world’s largest producer, exporter and consumer of aquatic food. Since 1985, its policy has been to focus on aquaculture over wild catch, and it now accounts for over 60% of global aquaculture output, making an important contribution to food security and poverty reduction. Both saltwater and freshwater aquaculture have been developed, with a long-standing 60:40 split in terms of live weight output. However, most saltwater aquaculture produces shellfish, which has lower yields of edible meat.

According to China’s plans for the 14th Five Year Plan period (2021–25), aquaculture output will grow as will its share of all aquatic food production. Alongside speeding up development of standardised pond-based aquaculture, industrial recirculating systems and combined aquaculture and rice-growing, China is also encouraging the development of deep-sea aquaculture standards and equipment.

Statistics from recent years show a new trend: environmental governance has meant the area of land dedicated to freshwater aquaculture has fallen since 2018, but total output has continued to grow. Pond-based aquaculture is still dominant, while combined aquaculture and rice-growing and intensive industrialised systems are growing fast. When it comes to saltwater aquaculture, there has been a clear fall in output from coastal shoals, where the more environmentally friendly farming of algae and shellfish is now preferred. Meanwhile, industrial-scale and deep-sea cage farming are small, but showing the most growth.

“Currently, saltwater aquaculture is concentrated in bays.” Zhang Wenbo said that a lack of data on the ocean conditions where deep-sea cage-based aquaculture is being rolled out by China, and a lack of experience and technology, means that more research on economic efficiency and work safety, and a cautious approach are needed, before the sector expands greatly.

“Freshwater aquaculture is also improving, in a more sustainable and intensive direction, with output by area continuing to grow,” he said. “The key is still where and how to carry out those operations.” He suggests more research and resources are needed, better balanced across freshwater and saltwater aquaculture, to help develop the sector and contribute to global food security.

Both are important sources of aquatic food, but regardless of how demand grows, there will be resource and environmental constraints. According to Cao Ling: “With both saltwater and freshwater aquaculture, you can’t just look at their potential to produce food and assume constant growth, while ignoring the vulnerabilities and risks to fishery systems caused by global changes and human activity.”

How Bangladesh’s shrimp industry is driving a freshwater crisis