Among Ghana’s fishing communities, tradition has dictated that one day a week remains free from any activity, as a way of protecting stocks. For the rest of the week, the shoreline would usually bustle with those returning with their catch.

But this is no longer the picture. On working days, fishers now sit around mending broken nets or napping in canoes. Depleted fish populations in the West African country’s waters mean that more than just one day a week is a day of rest.

According to data from the country’s Fisheries Commission, there has been a drop in annual marine and inland fish production – that is, fewer fish are being caught. Although there was an increase in 2020, catches were still over 15,000 tonnes lower than 2017 levels. One of the reasons for this is the amount of fish being lost to illegal, unreported and unregulated (IUU) fishing.

More than one in five fish around the world is estimated to be caught illegally – that is, by fishing that breaks fisheries laws and regulations, or occurs outside their reach. In hotspots such as West Africa, it’s as many as one in four fish. This amounts to an estimated 26 million tonnes of fish annually, valued at US$10–23 billion, according to the UN Food and Agriculture Organization.

IUU is costing developing countries considerably each year, with Ghana estimated to lose nearly US$23.7 million in revenue annually. Such activities have also decimated its small pelagic fish populations, such as sardinella, whose numbers have dropped by 80% in the past two decades.

Illegal fishing is one of the most serious threats to the sustainable exploitation of living aquatic resources, jeopardising international efforts to promote better ocean governance, the European Commission says. According to the commission, IUU also results in unfair competition for local fishing communities who abide by the rules. 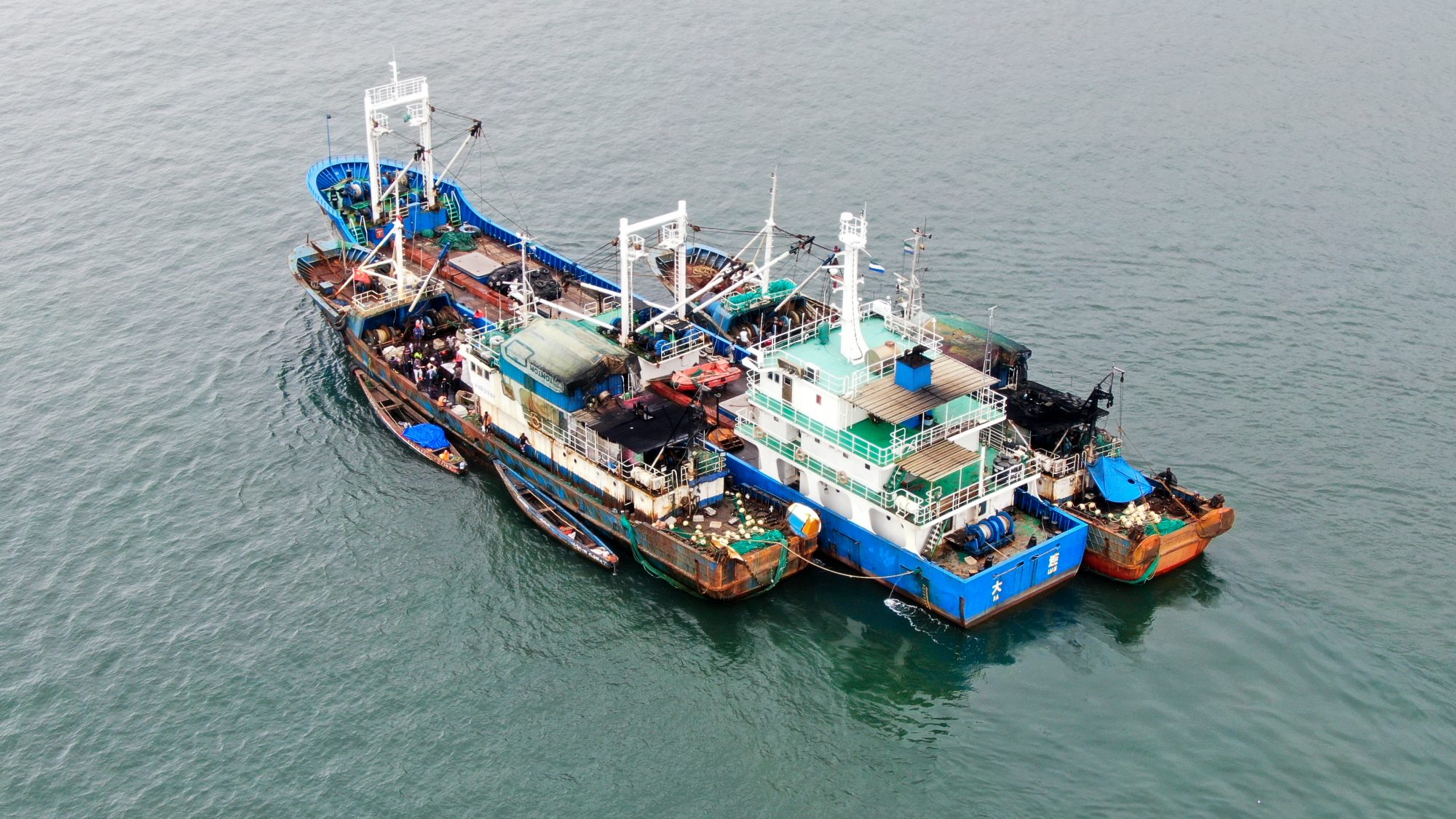 Foreign vessels conduct an illegal transhipment – the transfer of fish from one vessel to another at sea – off the coast of West Africa. The practice is often used to hide the origin of illegally caught fish. (Image © China Dialogue Ocean)

After concluding in 2013 that the country’s level of development and engagement against IUU fishing was inadequate, the European Commission issued Ghana its first “yellow card” warning. Although this was lifted in 2015 when the country instituted new legislation and a clear fisheries management plan, the lack of subsequent implementation has allowed the situation to deteriorate. In June 2021, the EU was forced to issue a second yellow.

Ghana is the first country ever to have been re-carded in this way. It must now urgently work to eradicate illegal fishing by vessels flying its flag and operating in its waters or face a red card. This would come with economic sanctions that could see the country completely lose access to the lucrative European seafood export market.

Kwaku Wangala was 25 when he first saw a foreign trawler in Ghana’s central region. In the 35 years since, he has seen the situation go from bad to worse.

“We could even catch fish with our hands, until the first two trawlers landed on our sea. We began recording low catches and sometimes no catch at all,” explains Wangala, now chairman of a fishing cooperative at Abrofo-Mpoano beach, 166 kilometres west of the capital Accra. The community has about 5,000 fishers – predominantly women, whose lives have been plunged into poverty. To stay in business, the fishers began to engage in “light fishing”, a method which uses lights above or under water to lure fish to specific areas to be caught. This method of fishing is classified as illegal under the 2002 Fisheries Act of Ghana.

How on earth do you ban locals from fishing under a closed season but allow foreign trawlers to fish?

“Those who introduced us to light fishing didn’t inform us about how long we could practice it. So, it became difficult to retract the practice, until arrests set in. Some fishermen still use light fishing methods because they would not watch helplessly while foreign trawlers took over their sea,” Wangala says.

Kwame Amoah, 45, left education for the lucrative path of fishing some 30 years ago. Now, he does not catch enough, and it has become difficult to pay his children’s school fees. For him, the second yellow card is both a blessing and a curse.

According to Amoah, the opinions of trawler owners are considered in decision-making because they pay taxes, whereas local fishers are excluded because they do not. This situation means that the challenges experienced by the country’s fishing sector are far from being resolved, Amoah says, as the trawlers that pay taxes are the same ones committing crimes at sea, and jeopardising the survival of fishing communities. 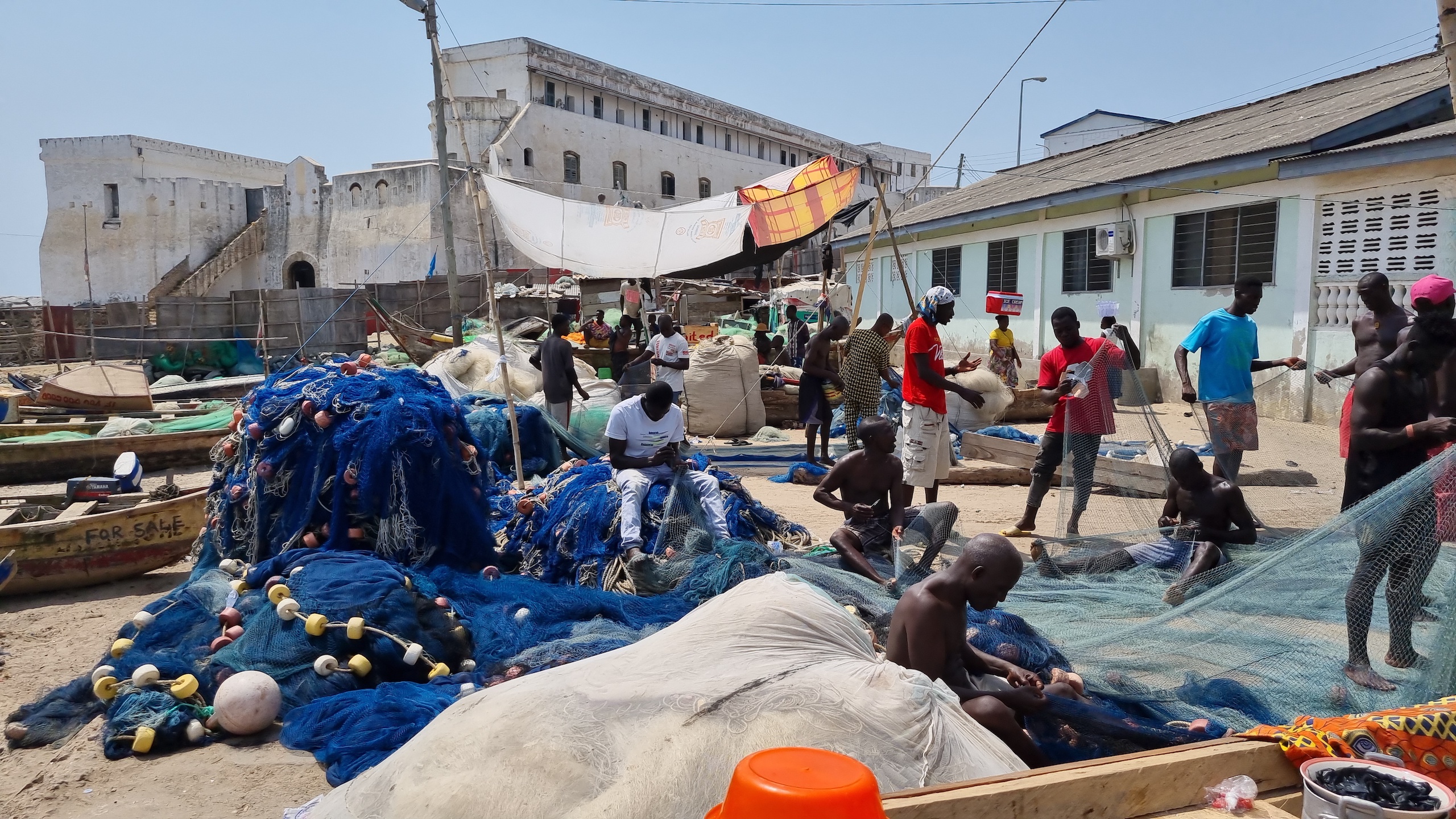 While the yellow card aims to push the government into implementing proper management by stopping transshipment – the transfer of fish from one vessel to another at sea – and “saiko” fishing, locals say they should not be part of “blanket policies” as it affects their livelihoods.

Saiko fishing is the transferring of fish from industrial trawlers to specially adapted canoes that outcompete smaller boats, and is a long-standing and critical problem in Ghanaian waters. It is estimated to account for around 100,000 tonnes of fish every year, worth as much as US$51 million. Saiko is illegal under Ghanaian law and carries fines of up to US$2 million, but these have proven difficult to enforce, and the practice remains attractive because it is so lucrative.

In the last three years, the government has implemented closed fishing seasons across Ghana’s waters, in which all activities in a certain area are halted for three months to allow populations to recover. But local fishers were far from satisfied. “How on earth do you ban locals from fishing under a closed season but allow foreign trawlers to fish?” Amoah asks.

Although the country’s fishing regulators have imposed sanctions on vessels engaged in or supporting IUU fishing activities (including ensuring that vessels with infractions and fines pay up before their licenses are renewed) critics say that these sanctions are ineffective because of corruption and lack of monitoring.

Fishers must be part of the solution

In 2021, Abrofo-Mpoano chairman Wangala insisted on improving consultations with fishers, after attending a meeting convened by the Fisheries Commission on the EU yellow card. He believes that local fishers are best placed to complement the government’s efforts in combating IUU at the grassroots level.

“We’re aware that the usage of detergents [to improve water clarity while fishing] and other unapproved gear in fishing isn’t right. We have even alluded to the dangers of Ghana’s fish stock, but we need a consultative plan that will ensure that trawlers are off the seas,” he insists.

In 2002, Ghana passed a law forbidding any foreign ownership or control of vessels flying its flag, in a bid to retain more revenue from its fisheries. But a 2018 investigation by the Environmental Justice Foundation (EJF) revealed that around 90% of Ghana’s industrial fleet is linked to foreign owners, who circumvent the law by using “front” companies to import their vessels and obtain licenses.

The Ministry of Fishery and Aquaculture Development (MOFAD) has reviewed policies that enforce regulations and monitoring of its seas, while a new National Plan for Action on IUU fishing covering 2021–2025 was  submitted to the UN Food and Agriculture Organization in May 2021.

Last year, the government also created the Fisheries Enforcement Unit, an inter-agency team under MOFAD, made up of the Fisheries Commission, Ghana Navy and Marine Police. It has intensified at-sea inspections and beach-combing operations to monitor compliance with fisheries laws and regulations. 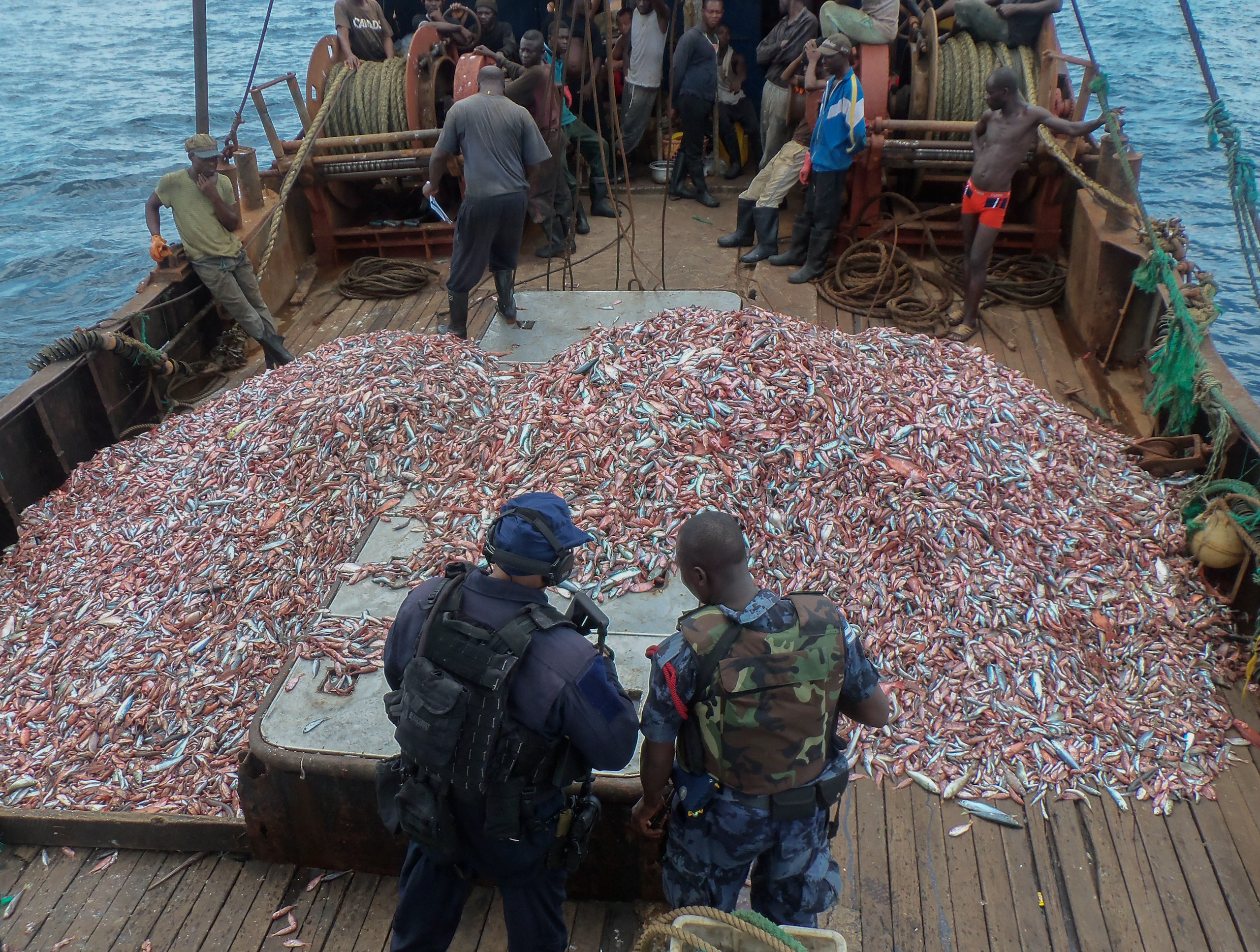 A Ghana Navy officer and US counterpart inspect a vessel suspected of illegal fishing, as part of the Africa Maritime Law Enforcement Partnership with the US Navy and US Coast Guard, which helped West African nations patrol and intercept IUU activity. (Image: Kwabena Akuamoah-Boateng / US Navy, Public domain)

As part of the action plan, the ministry also wants to place observers on all industrial vessels, who are mandated to report all infractions they witness.

However, one of the challenges both civil society and observers struggle with is the lack of evidence to enable legal prosecutions. It is hoped that help will come from a new app called Dase (meaning “evidence” in the local Fante dialect), which allows fishers, observers and even community members to submit geolocated videos or pictures of infractions at sea in real time. These reports are gathered by EJF, who then forward them to the Fisheries Commission for appropriate action to be taken.

Ghana is also seeking to ensure transparency around the operations of foreign trawlers by front companies, looking to clarify hire-purchase agreements, in which local fishing licence holders buy foreign vessels, paying in instalments while operating the vessel. It is hoped that these measures, if properly implemented, can help restore best practice at sea and enable the country to redeem itself from the EU’s yellow card book.

How Ghana’s weak penalties are letting trawlers off the hook