China is changing the structure of its ministries, with huge implications for its management of marine environments. The roles of the former State Oceanic Administration (SOA) have been divvied up across different bodies. So what will this mean for the management of the ocean?

As part of the reform of China’s ministerial structure, the SOA has been split in three. The bulk of its work goes to the newly-formed Ministry of Natural Resources (MNR). Environmental protection responsibilities are now part of the Ministry of Ecology and Environment (MEE), while coastguard duties have been taken over by the People’s Armed Police. China Dialogue looks at what this means for four key aspects of the marine governance in China. 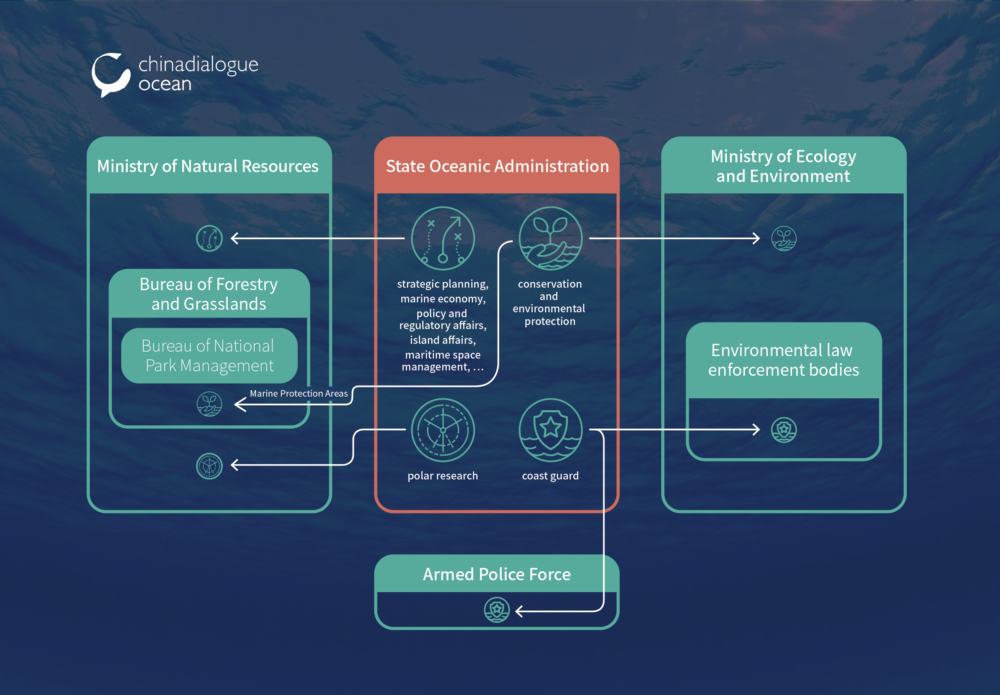 The formation of the MNR brings ownership of natural resources — such as forests, grasslands, land and water — under one roof, confirming that these ecosystems will be treated as an entirety and ending duplications in spatial planning. From now on the designation of marine reserves, and setting of red lines for marine environments, will be carried out as part of marine spatial planning under this new framework. This will help to avoid disputes about jurisdiction over reserves and conflicting policies.

Most of the marine reserves under the former SOA contained wetlands – which were under the purview of the former State Forestry Administration (SFA). It was therefore common for one area to have two or even more “owners”. That will now change.

The changes will see the MNR form a new National Forestry and Grasslands Bureau, based on the SFA, and a subordinate National Parks Management Bureau (responsible for management of the various reserves). Either of these could be given responsibility for marine reserves.

It has always been hard to coordinate the prevention of marine pollution. Those attempting to clean up the oceans often complain that pollution originates on land.

The new MEE is based on the former Ministry of Environmental Protection and has taken on the environmental protection responsibilities formerly divided across six other bodies. This links up marine and onshore governance and handling land-source marine pollution will no longer require cross-departmental cooperation.

Take plastic litter: The SOA had long been researching methods of tackling marine litter (an estimated 80% of which is plastic). That waste should be dealt with on land, and the reshuffle has provided the opportunity for a land-marine coordinated approach.

Fishing is a major issue for the marine environment. Fishing has always been managed by the Ministry of Agriculture’s Bureau of Fisheries and will see no major changes.

However, part of that bureau’s duties – inspection and supervision of fishing vessels – have been shifted to the Ministry of Transport, and are almost certain to end up with its water transport bureau.

The inspection regime for fishing vessels is similar to that for other vessels and there is no need for two separate systems. This change is therefore more of a structural refinement or optimisation than a drastic overhaul.

China’s fishing vessels are becoming larger and more advanced, with the coastal and deep-water fleet now numbering over 1 million vessels and making up an important part of marine traffic. It therefore makes sense for the Ministry of Transport to take over this responsibility.

The SOA had a number of subordinate agencies, including three marine research bodies and the Polar Research Institute of China (PRIC).

Experts have revealed that some local universities are interested in taking over the research bodies as a way of earning stripes in the field of marine science. This may lead to a tussle over who gets to lead China’s marine research.

The Chinese Arctic and Antarctic Administration and the Polar Research Institute may be placed under the MNR. The MNR itself has been created from the former Ministry of Land and Resources, which did not have any polar research interests but could establish a separate polar office, or directly absorb the relevant SOA departments.

The SOA name will be retained, as part of the MNR. Any ongoing work with outside partners will continue under the SOA banner.

If the polar bodies discussed above are moved along with the SOA then polar regulations, such as February’s Regulations on Environmental Protection in the Antarctic, can be expected to be overseen and enforced by the MNR.

The break-up of the SOA will mean changes in the domestic and international relationships it previously managed. This may raise some difficult issues. The SOA produced the 13th Five-Year Plan (FYP) for National Marine Economic Development, and it is not yet known exactly how the aims of that plan will now be achieved.

That plan included 10 main targets, but only two, both related to environmental protection, were binding; on water quality in coastal waters and retention of natural coastlines. It seems likely these will be passed on to the MEE (now responsible for monitoring and evaluating the marine environment) and the MNR (responsible for ecological protection) respectively.

Other FYP targets may end up in different hands after the shake-up. The target of strengthening overall environmental management of the oceans includes “strict oversight and enforcement of pollution from marine oil extraction, oceanic fish farming and shipping” – originally this would have been part of the resource and environmental law enforcement duties of the SOA’s coastguard department, but may now be handled by the MEE’s “Ecological and Environmental Law Enforcement Team.”

As the plan covers so much ground, some experts expect it to be temporarily shelved until a new organisational framework is finalised.

The State Council’s proposal for the changes only covers the allocation of the SOA’s primary functions. There are also over 20 agencies, including branches and research bodies, which may be broken up and reallocated as a result.

A fifteen-strong leadership group for the MNR has been finalised, with SOA head Wang Hong and two of his deputies listed. On March 31, at a State Council meeting on structural reform, vice premier Han Zheng called for the new bodies to be formed by mid-April, with responsibilities, organisational structure, staffing and budgets to be finalised by the end of June.

By the summer, the new framework for China’s governance of the ocean will be clearer.