A total of 410 commitments were made at the event, hosted jointly by the Republic of Palau and the United States. The conference is an annual event initiated in 2014 by then US secretary of state John Kerry, who is now the US special presidential envoy for climate. The conference was envisioned as a platform to mobilise support and funding for ocean initiatives to address the world’s most pressing ocean issues. As such, it’s a key milestone event for leaders to ensure global commitments on ocean health are upheld and backed by robust financing.

To date, the seven OOC events have accrued more than 1,800 commitments worth more than $108 billion and protected at least 13 million square kilometres of ocean. “We’re starting now finally to act with the urgency that the moment demands,” Kerry said in his closing remarks, “even as we understand that we have to accelerate even more.” 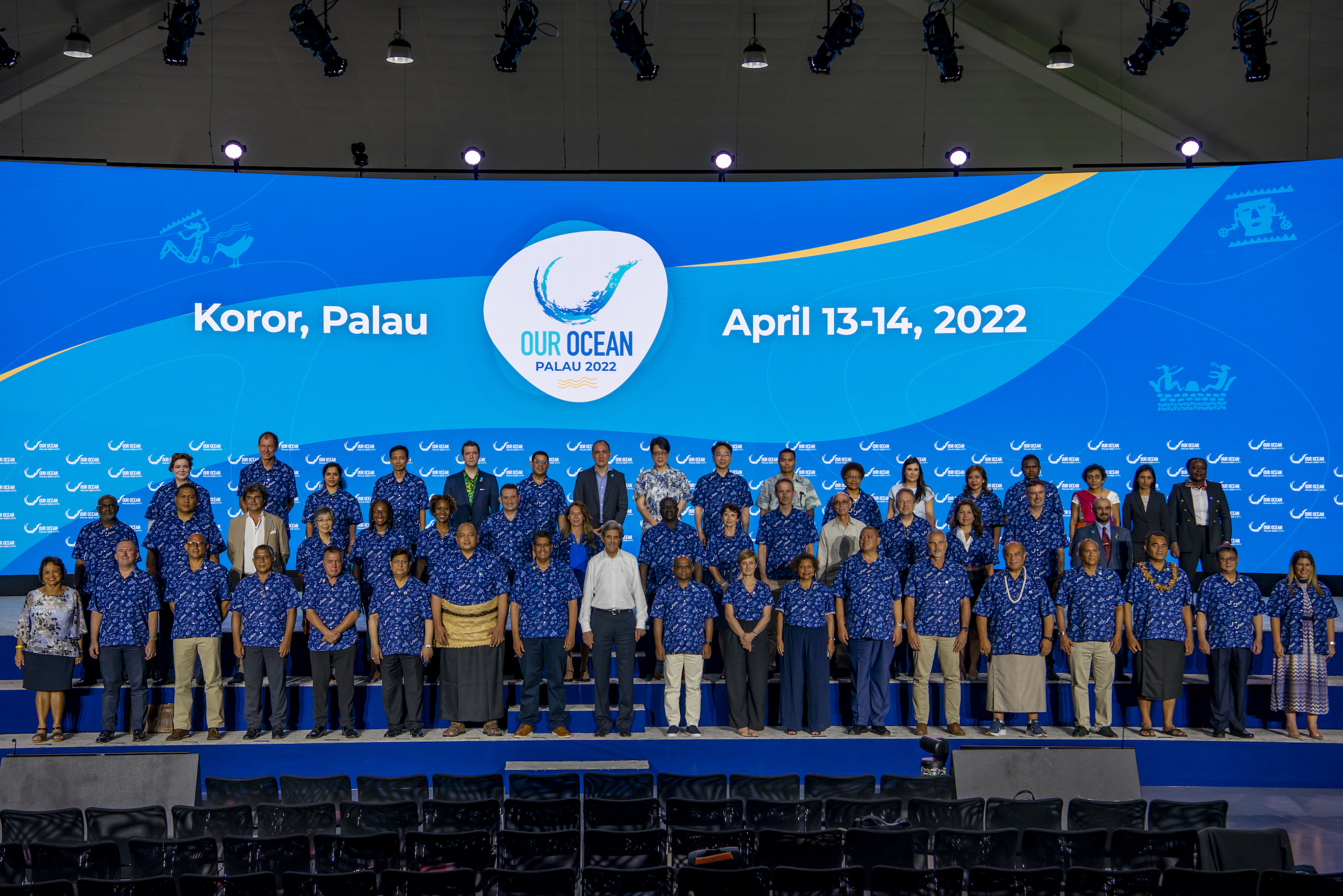 It was the first time a small island developing state had hosted the conference, which lent the event a unique perspective and focus, underscoring the intrinsic importance of healthy oceans to the well-being and prosperity of coastal communities, and the crucial role and leadership of indigenous peoples and local communities in tacking the climate change and ocean crises.

We should not be paralysed by the magnitude of this problem

“For me, like many Palauans, and millions of people from ocean communities around the world, our connection to the ocean is very personal,” Palau President Surangel Whipps Jr. said in his opening address. “Our lives, cultures and economies are inherently shaped by the ocean as a provider and protector. It’s our home, it’s our lifeline, it’s what makes us who we are.”

Whipps said it was a “huge victory” to see ocean issues a focus of attention at the COP26 climate negotiations in Glasgow last year. He said that due to the close link between ocean and climate health, action to protect the ocean is vital for small island developing states around the world that are experiencing higher temperatures, stronger typhoons, coral reef loss, rising sea levels and coastal flooding. “The Glasgow Pact validated the bitter reality that ocean and coastal communities bear the brunt of climate change,” he said. But “we should not be paralysed by the magnitude of this problem.” 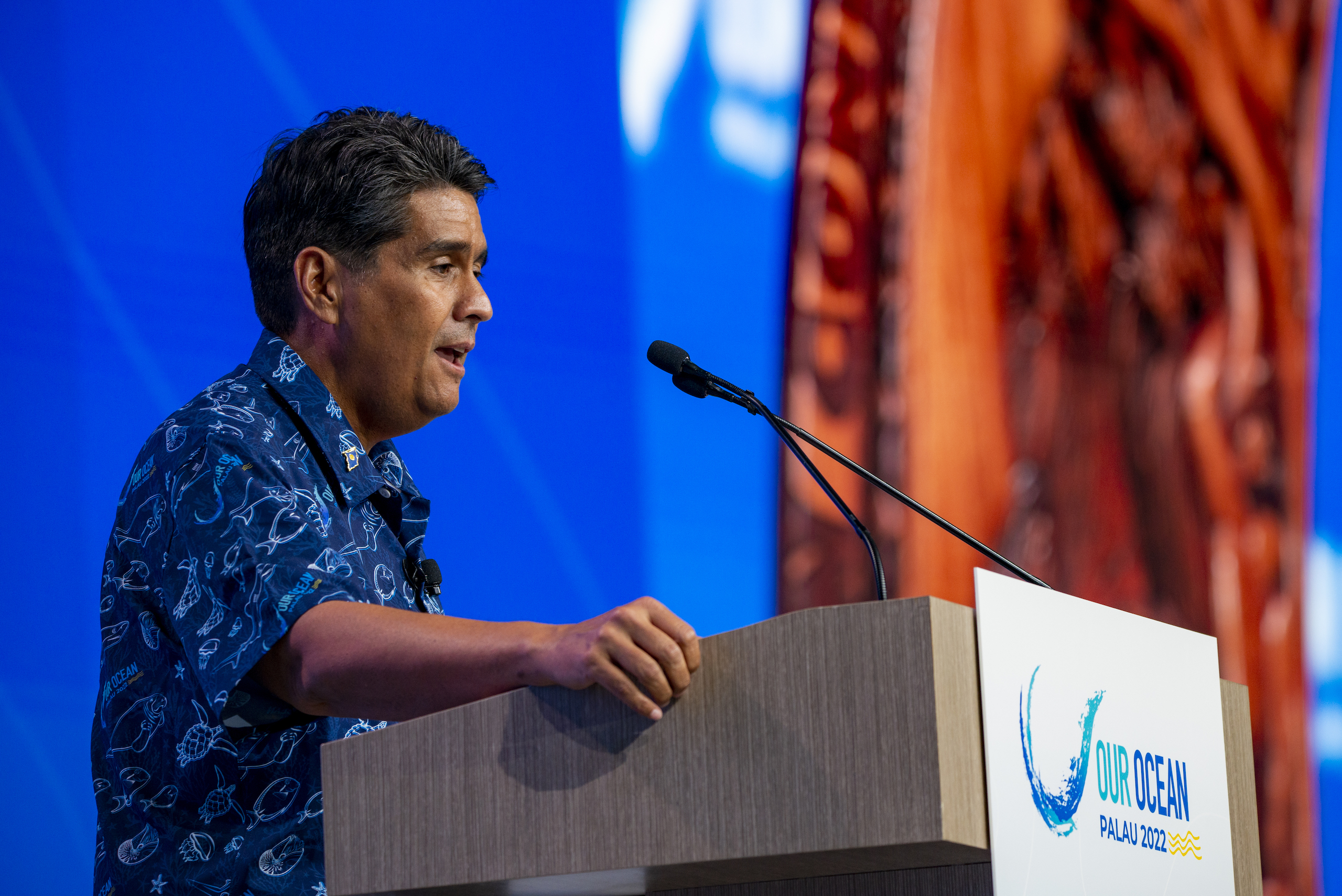 With 2021 the hottest year on record for the ocean, surpassing the previous record set in 2020, ocean-based solutions to the climate crisis were at the top of the agenda.

In his opening address, Kerry said the ocean and climate are intrinsically linked: ocean protection is key to confronting climate change, and cutting greenhouse gas emissions is vital for future ocean health.

Kerry called on participants to confront the challenges of the global climate–ocean crisis with a new level of urgency. “We know, every single one of us, that it costs far more money, in the trillions of dollars, to deal with the costs of the damage if we don’t invest those funds now. And the science tells us that every tenth of a degree [of heating] matters enormously.”

Kerry cited the latest report by the United Nations Intergovernmental Panel on Climate Change, published last month, which indicates that scaling up renewable energy and decarbonising the shipping sector, among other actions, could lower emissions enough to limit warming at less than 1.5C above pre-industrial levels. He said he remained optimistic that we can develop and implement the solutions to solve our problems, but warned that “none of us are yet moving fast enough.” 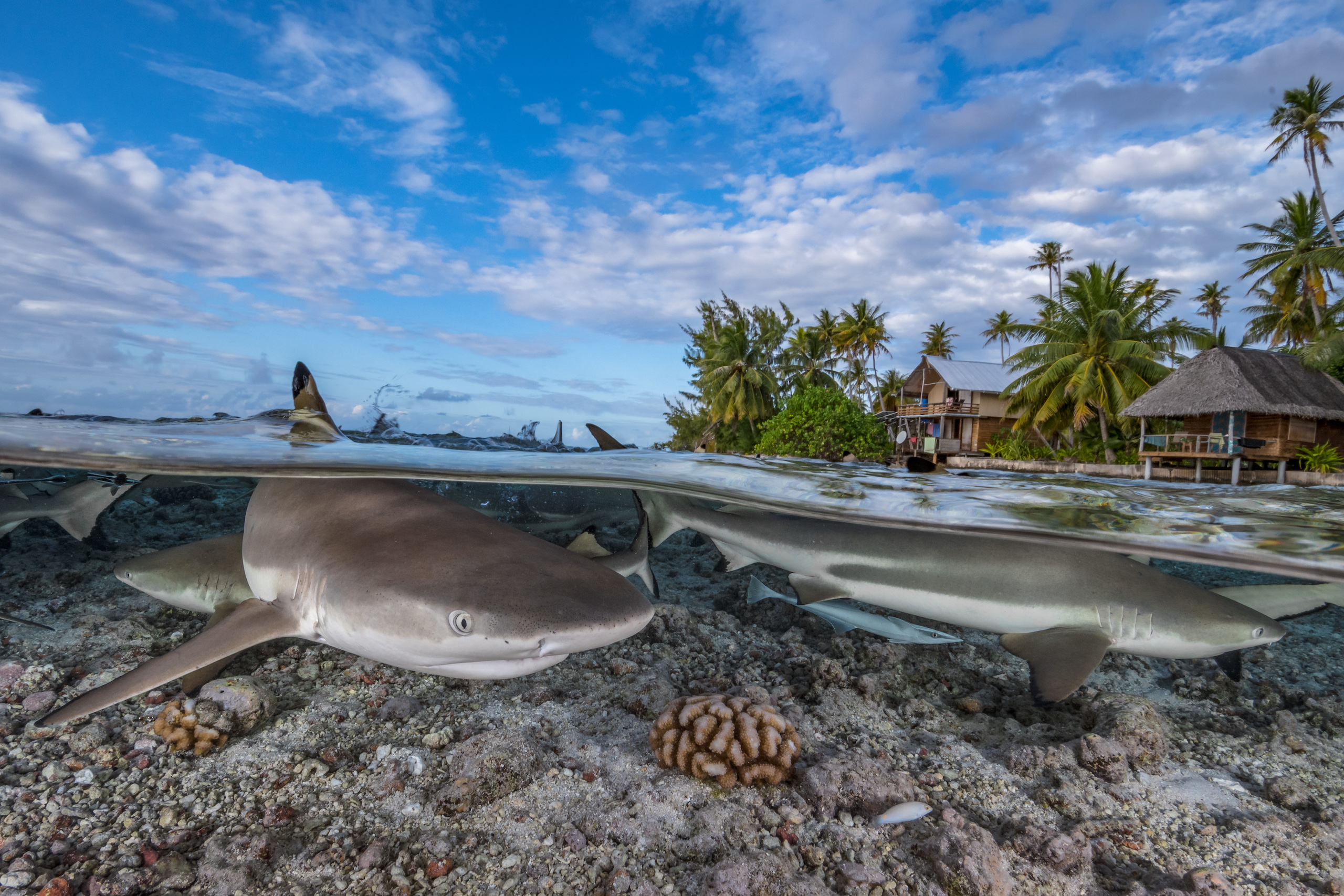 A central theme of the two-day event was managing ocean resources sustainably and equitably as part of a blue economy. Drawing on an IMO study from 2014, several speakers noted that if the shipping sector were a country, it would be the eighth-largest emitter of greenhouse gases in the world. Ambitions to make shipping green and zero-emission are underway, with signatories to the Declaration of Zero Emissions in the Maritime Industry by 2050 doubling during the conference. Pledges were also made to dramatically scale up offshore renewable energy.

Tackling plastic pollution was another key focus. Without action, the annual flow of plastic into the ocean will nearly triple by 2040. To this end, speakers acknowledged last month’s UN resolution to develop a legally binding treaty to combat plastic pollution over the next two years. Recognising the global problem of discarded fishing gear in the oceans, numerous commitments were made focusing around the collection, recycling and reduction of abandoned, or “ghost,” fishing nets, a common cause of entanglement and marine species fatalities.

The crucial role of traditional and indigenous knowledge to ocean management and decision-making was also a theme that ran through many discussions and presentations. A featured panel on indigenous-led conservation addressed a range of topics, from valuing customary practices and including diverse voices, to the need for sustained funding to help scale up projects, and the challenges of passing on traditional knowledge from one generation to the next. Indah Rufiati, fisheries lead with Indonesia-based nonprofit Pesisir Lestari, echoed the call to safeguard customary practices in a plenary session on advancing sustainable fisheries. She said securing the marine tenure rights of small-scale fishers is central to achieving sustainable marine resource management: “I believe that the communities have the solutions.” 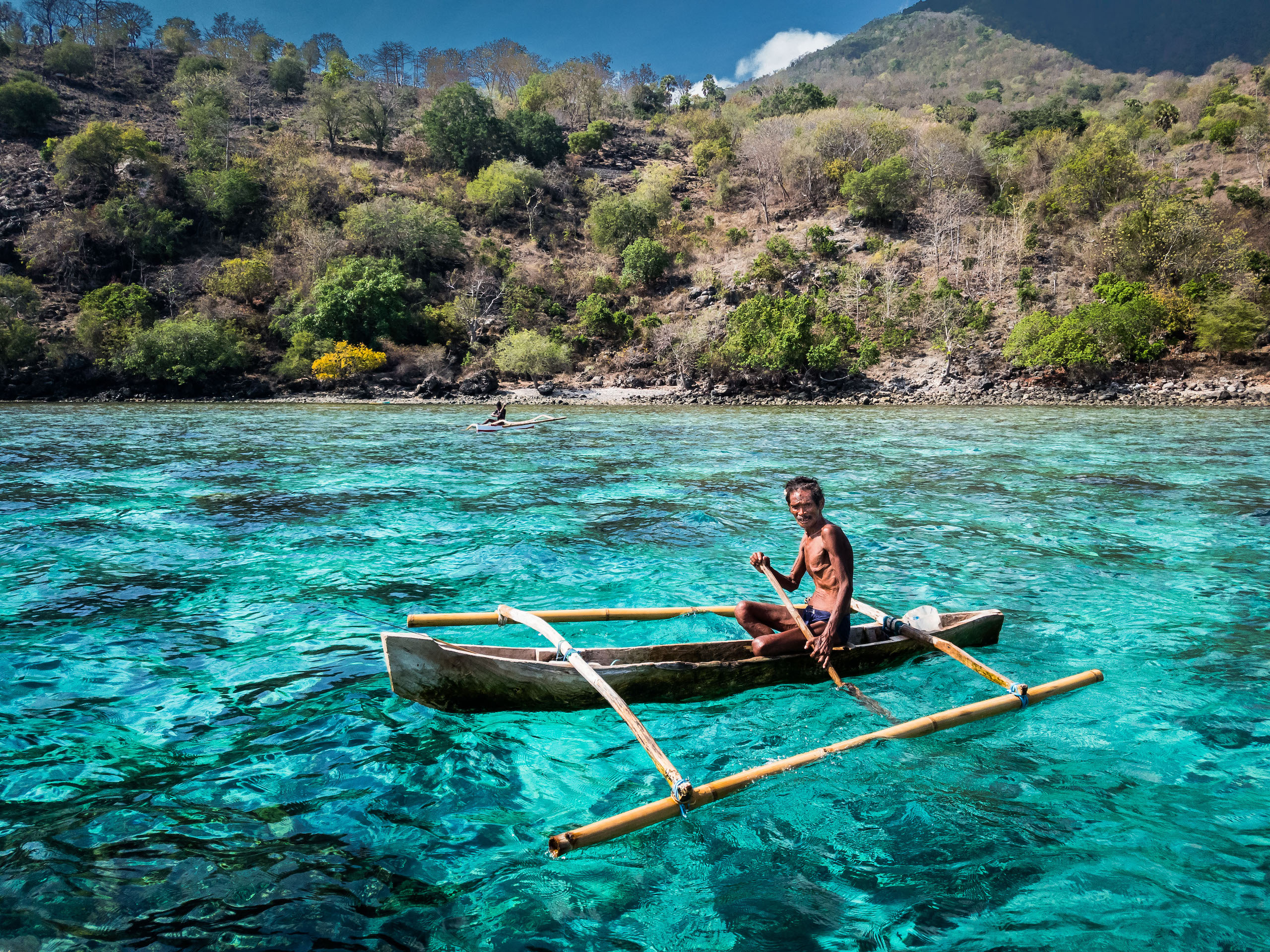 Another area of attention was marine protected areas (MPAs). With the event taking place in Palau, where 78% of the country’s exclusive economic zone is under high protection as part of the Palau National Marine Sanctuary, participants were encouraged to increase the expanse of their own territorial waters set aside as MPAs.

Speakers acknowledged the importance of UN negotiations on a treaty to protect and manage the high seas – international waters that span about two-thirds of the ocean. Although the talks failed to reach a consensus on several points, including on the framework for establishing high-seas MPAs, participants said they were hopeful that agreement would be reached by the end of 2022. Presenters also called for the protection of the waters around Antarctica.

A number of new MPAs were announced, and support given to the target to protect 30% of the ocean by 2030. Commitments included US$700 million from the Australian government to protect the Great Barrier Reef and $25 million from the Shark Conservation Fund toward expanding MPAs and strengthening trade and fisheries regulations to benefit sharks and rays.

The need to combat illegal, unreported and unregulated (IUU) fishing was another focal area, alongside the related issue of harmful fishing subsidies that encourage the depletion of fish stocks and undermine small-scale fisheries. New resources to be mobilised against IUU fishing include $250 million pledged in the form of policy, governance, on-the-water assets, technical assistance, and innovative forms of monitoring and traceability.

In closing the two-day event, Whipps said the conference had demonstrated “the immense value of traditional knowledge and practices of Indigenous people [as] a crucial supplement to science that cannot be ignored.” He also expressed his gratitude to the young conference participants who will form the next generation of ocean protectors. “In bearing witness to their passion and intelligent engagement,” he said, “I know that the ocean will be in good hands.”

This article was originally published by Mongabay.

Protecting the ocean, from the land