In the port city of Xiamen on China’s southeast coast, three cameras watch the Jiulong river as it wends its way to the sea; not for the beautiful views, but to monitor litter. The images are processed to identify types of waste, predicted drift patterns are quickly calculated and ideal collection points are chosen. The following day, the bulk of the stray waste will be hauled aboard a boat.

This forecasting system, developed by Xiamen University, has been running since July 2017 and has made the collection of marine waste more efficient.

Xiamen has also managed to identify upstream sources and implement regulations to stem them. Separate work is being done to deal with the pernicious problem of abandoned fishing gear, either by making it biodegradable or making sure it is recycled.

Other coastal cities in China are also developing strategies to prevent trash entering the sea. With the whole world wanting solutions to the blight of ocean plastic, is Xiamen showing the way?

The report that prompted an investigation into marine waste

Before 2015, there had been little serious research into how much plastic was ending up in the ocean via China’s numerous rivers and 18,000-km coastline. That year, Jenna Jambeck and others calculated that in 2010 China had accounted for almost one-third of all plastic waste entering the ocean, more than any other nation.

The paper, published in Science, caused a stir. Many Chinese researchers thought the amount of waste entering the ocean from China was overstated, though they had no data to prove it.

Then in 2018, a team led by Professor Li Daoji of East China Normal University calculated that Chinese ocean waste in 2011 was only a third of Jambeck’s figure for 2010, and that preventative measures would see that halved by 2020. The huge discrepancy was due to the limited accuracy of Jambeck’s global model, and a failure to use basic data from China, said a member of Li Daoji’s team who preferred to remain anonymous.

Jambeck’s report certainly pushed marine plastics up the agenda. Liu Yonglong, chair of the Shanghai Rendu Ocean Development Centre, admitted that for a while China was on the back foot internationally, due to the lack of its own data.

As research has progressed, the country has come up with its own approaches to marine waste. In this Xiamen has been a leader.

The city set up an ocean sanitation station over two decades ago to remove waste from the ocean and keep the seascapes beautiful and shipping safe. 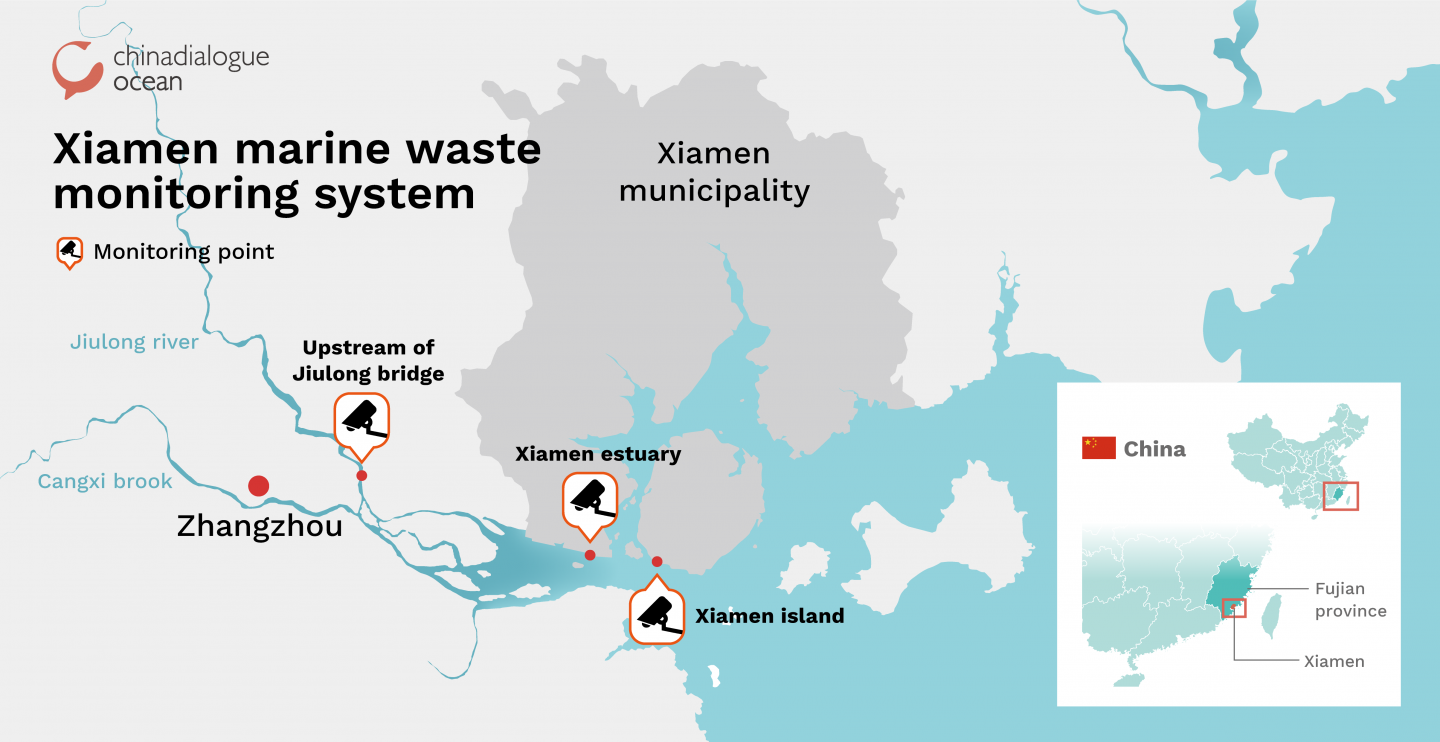 The forecasting system developed at Xiamen University is a key part of that. At 6pm it issues a forecast for the following day, making waste collection easier and emergency responses possible.

Forecasting is only a part of the Xiamen model. In 2016, the city began surveying sources of marine waste. The largest were found to be effluent outlets and beach tourism, accounting for over 500 tonnes of waste a year, with aquaculture close behind.

The survey allowed Xiamen to improve its monitoring guidelines, based on location and size of waste items. It also put in place regulations to reduce the outflow of trash.

Xiamen is looking at using “environmental compensation” to reduce plastic waste entering the Jiulong river upstream in the city of Zhangzhou, according to Pan Zhong, an associate researcher with the Ministry of Natural Resources. Xiamen and Zhangzhou are discussing targets for waste reduction, with Zhangzhou to be paid if targets are met – or to pay Xiamen if they are not. Pan explained that payment levels are being discussed and targets would be set by the two cities at annual meetings.

But given the costs of monitoring and capturing marine trash, replicating the Xiamen model along the extent of China’s coastline would be no easy task.

One major source of marine plastic is fishing gear discarded from vessels at sea – beyond the reach of Xiamen’s approach. Research from 2018 found that almost half of the Great Pacific Garbage Patch consists of “ghost nets” from the fishing industry. This type of waste is much harder to bring back to land.

Zhang Yu of the Chinese Academy of Fisheries Sciences said the impact of discarded fishing gear has only recently been taken seriously in China, with his institute being one of the few bodies researching how to manage it. But with increasing concern in China over marine plastics, the institute has now been tasked with investigating how to reduce the dumping.

Zhang explained the research is focused on two tracks: making the gear biodegradable and recycling it.

Biodegradable gear breaks more easily and so is unpopular with the industry. As for recycling, the process itself creates pollution, and tracking recycling requires a new system to be put in place, managed by the fishing authorities and ports, as well as cooperation from fishers. Zhang’s East China Sea Fisheries Research Institute is designing a system to both track and recycle fishing gear, which may be trialled on some vessels.

Experts and NGOs contacted by China Dialogue Ocean all agreed that the monitoring, capture and recovery underway in Xiamen isn’t enough by itself to deal with ocean waste. More fundamental solutions are needed.

“When you go to the coast and see plastics broken down into pieces too small to pick up, all mixed up with the reeds and grasses, any hope you had for dealing with ocean waste is lost,” said Liu Yonglong.

In March 2019, another coastal province, Hainan, announced a plastics ban. By the end of 2020, the production, sale and use of single-use non-biodegradable plastics will be banned on the island, while the production of biodegradable alternatives will be encouraged, with support provided for small- and medium-sized manufacturers.

Patrick Yeung of the World Wide Fund for Nature thinks tackling ocean waste is a system-wide project requiring reduction in plastic use (through restrictions and replacement), better sorting and recycling, and new renewable products being brought to the market. “Currently, products travel in a straight line from production to disposal. We need to make that a circle,” he said.

'Industry needs to step up its game' on plastics