When Austrian chemist Wolfgang Trettnak moved to north-west Spain he was horrified by the volume of plastic and marine debris that collected on the beach near his home. The plastic fishing nets, bottles, bags, buoys, ropes, old boots and even toys strewn along the coastline for miles alerted him to the urgent environmental consequences of our plastic usage.

In response, he and Spanish fellow chemist Margarita Cimadevila founded an association, ArSciencia, dedicated to bringing art and science together to produce creative, innovative works that inform and inspire public action around pollution, overfishing and exploitation of the oceans, especially among young people.

Their exhibition, Mare Plasticum, is a colourful yet sobering collection of marine inspired art works that have been created exclusively from the human detritus washed up on the beaches of Galicia on the Atlantic Ocean.

Plastic bottles, bags, fishing nets, ropes, shoes and toys have been repurposed into art forms such as collages and mobiles. The diverse formats tell a singular message: that the marine environment and ecology is suffering cruelly from the avoidable ingestion of plastics, entanglement and raised toxicity resulting from Europe’s waste problem. 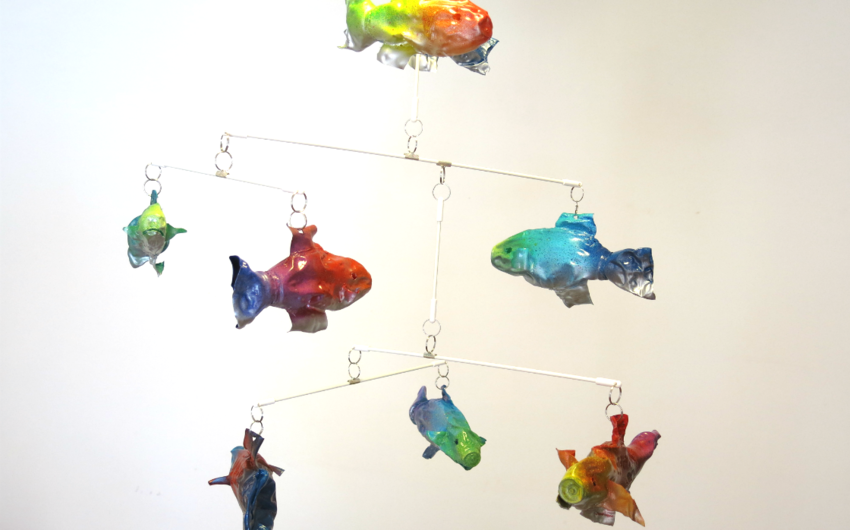 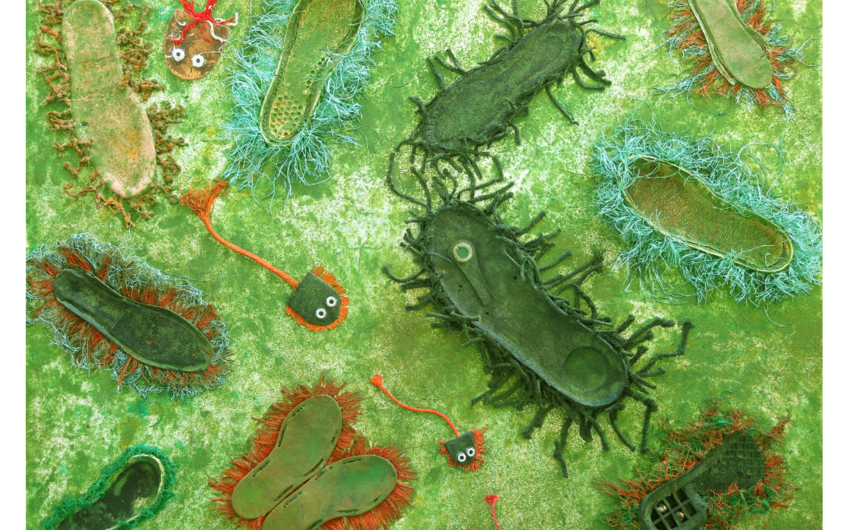 Slipper Animalcules. From shoe rack to beach front, old soles are a common site on shores.

The show belongs to a new wave of experimental “eco-art” that engages people on environment, sustainability and recycling issues.

We caught up with Wolfgang and Margarita at the opening of their show last month at the European Commission’s Our Oceans Conference in Malta.

Where does all this plastic come from?

A big part of the plastics come from fishing activities: nets, trap-boxes, lines ropes – anything used by fishermen, even shoes. Another big part comes from aquaculture, which is an important industry for Galicia, which farms mussels and oysters. The third source is domestic and urban litter. Anything you can buy in the supermarket you will find on the beach. 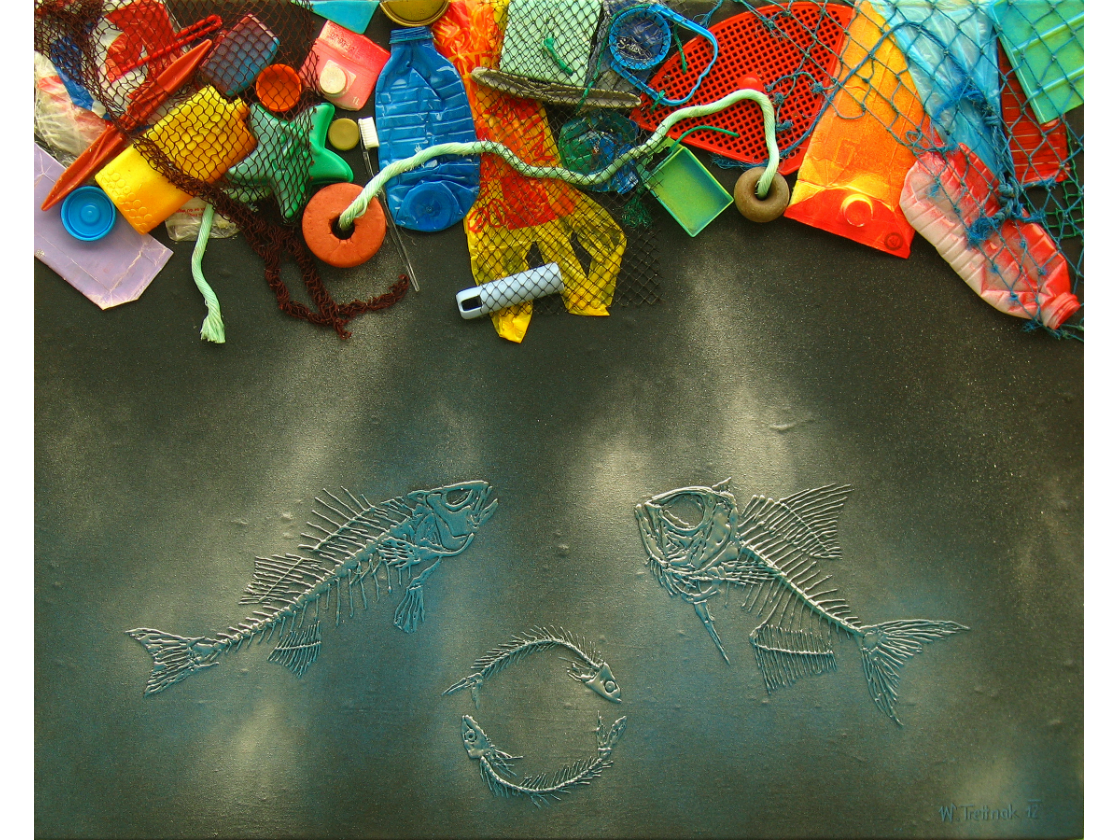 Below the Great Garbage Patch. In the Mediterranean, as many as one in four fish sold at market contain plastic.

It is one thing to investigate plastic but to then make art out of it, how did that come about?

Science and art are very similar, they have the same steps: investigation, mediation, experimentation. Our intention is to fight plastic contamination so we put cards next to the works to explain the problem being highlighted and how to fight it. 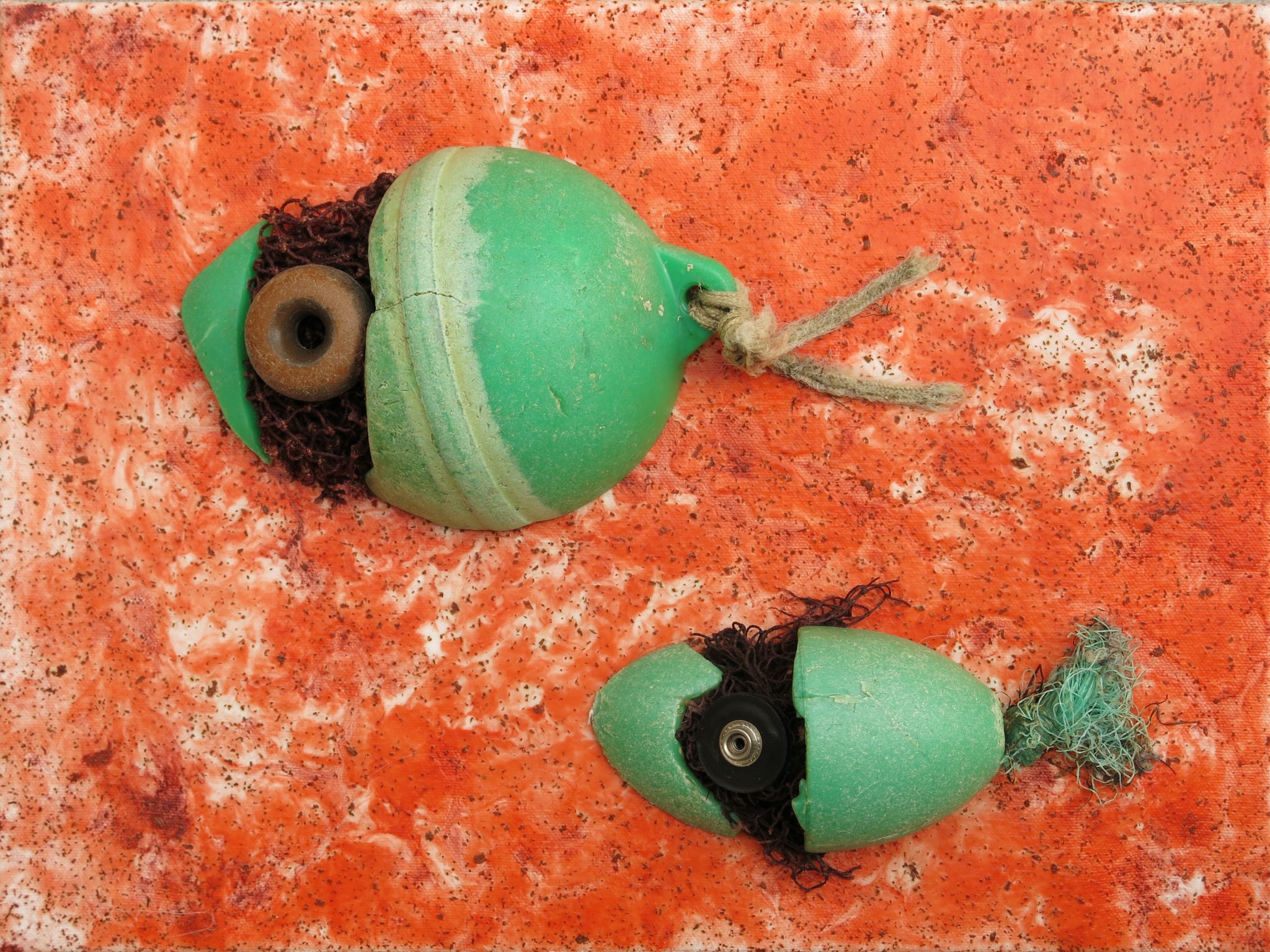 Pufferfish. Art that pops out at you sculpted from marine debris.

Were you shocked by what you discovered?

I learned that fish are eating plastic and fish are dying because they end up in fishing nets, which travel all around the world. The toxicity of plastic materials is changing the sex of fish and causing other strange effects. It’s shocking because there was little scientific information available when we started. 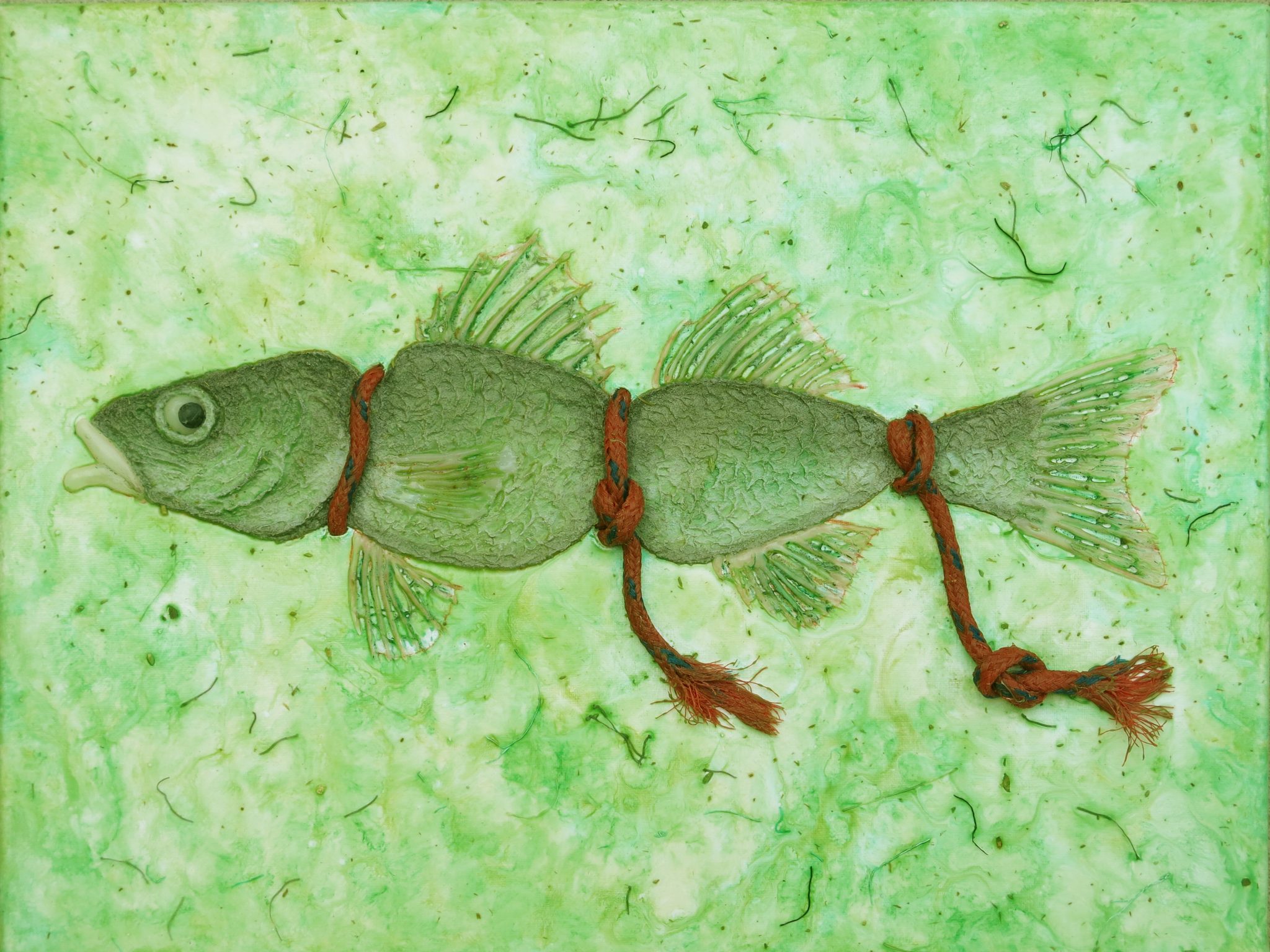 What do you hope to achieve through art as opposed to science?

We think art is a medium to give a message to people, especially young people. We are not using shocking images, as usually appear, but a more poetic approach, let’s say. But with a serious theme behind it. 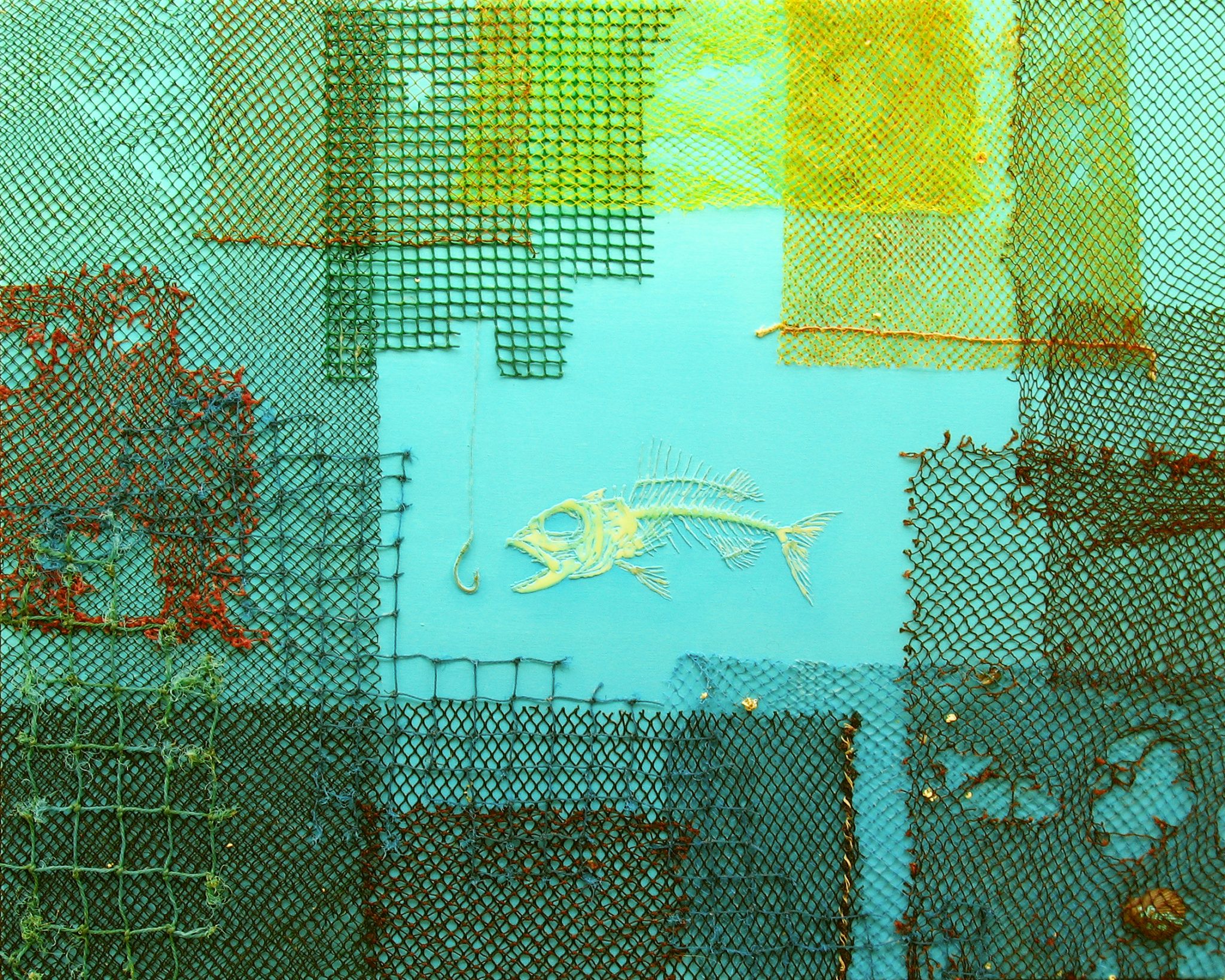 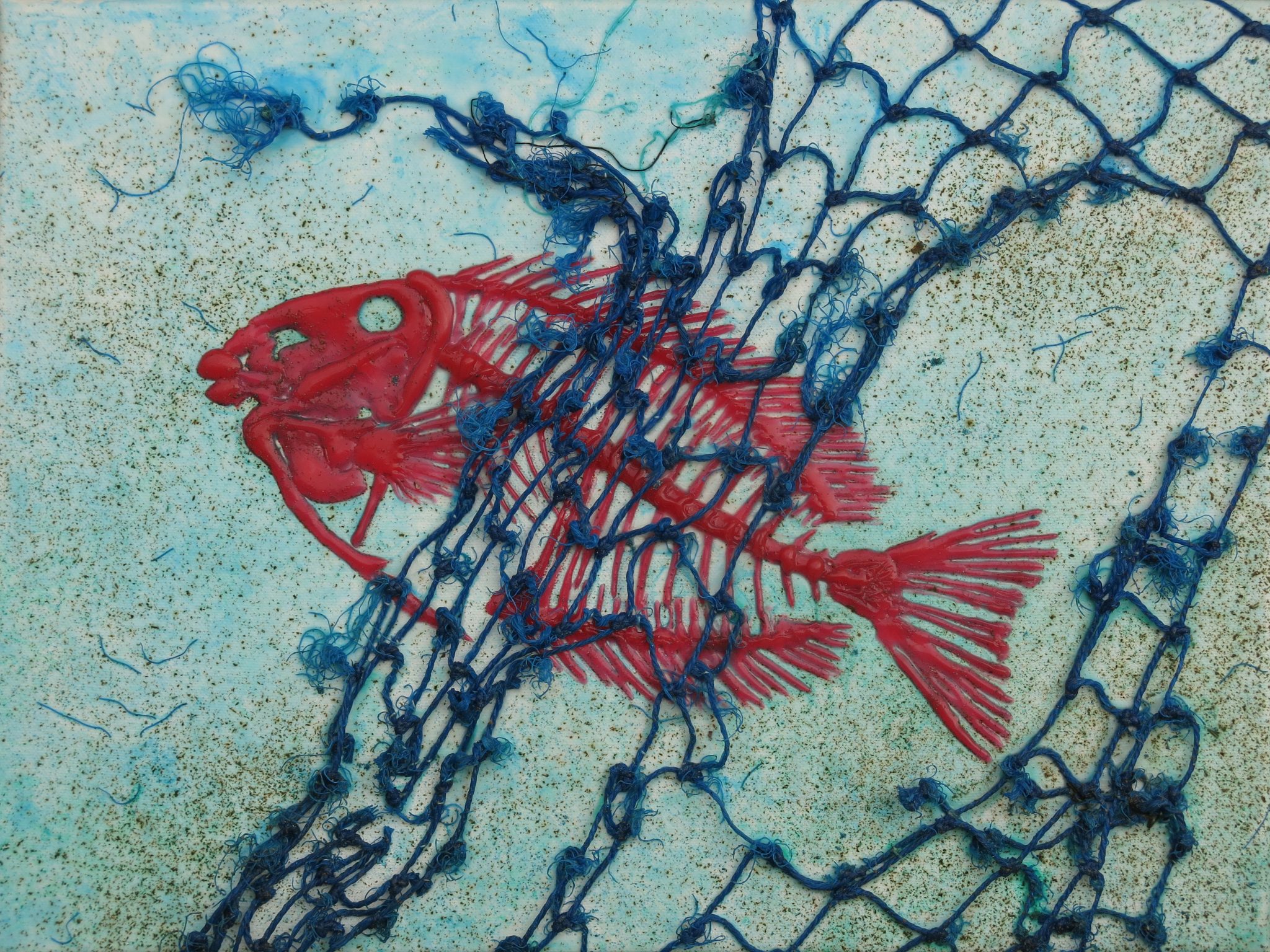 You say a lot of this litter comes from work activity from fishing and aquaculture. What can people do about that? 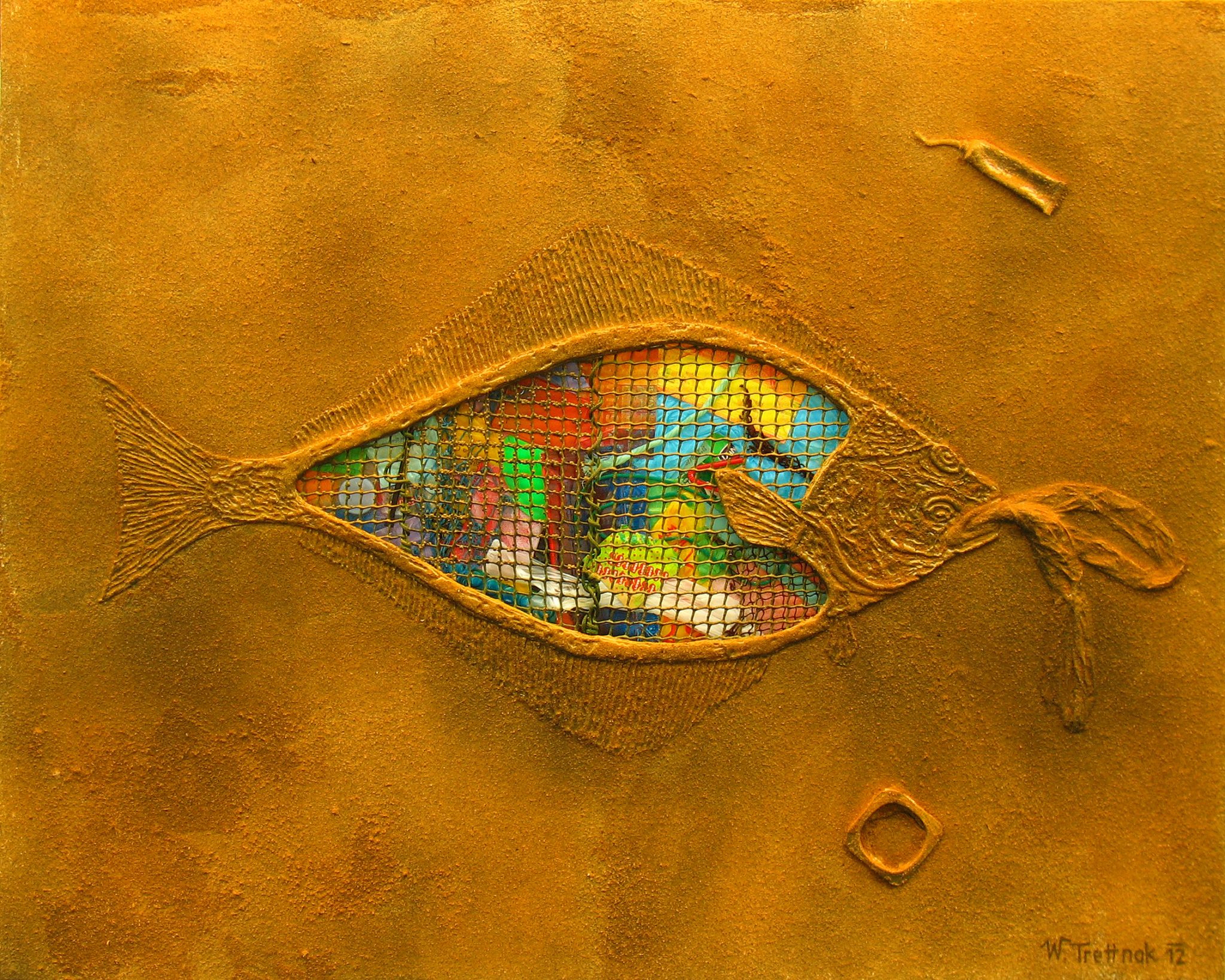 I Am Stuffed up! A fish full of plastic.

… so not losing them?

Some material might come from storms that have hit aquaculture farms, so this is not intentional. People should take care not to leave litter on the beach. In the summer, I see a lot of people leave litter. People are not dirty, but a lot of people leave a little litter so it accumulates. Some litter is blown in. Galicia is a windy place so even if you put it in the litter bin the wind may take it and later you’ll find it in the water.

Shark Fin Soup. This painting went to Beijing’s National China Museum for an exhibition on shark protection. The practice of “finning” is forbidden in Europe but in East Asia is still a big problem.

Some countries have banned plastic bags, do you think that’s a helpful solution?

Yes, it’s a start. In Spain they have started banning them slowly, asking for a few cents for each bag. I can see usage is decreasing, but overall the amount of plastic bag use is still enormous. It’s the same problem with drinking bottles. Tap water is not always good and smells of chlorine so the amount of people buying bottled water is enormous. That is the reason why we made a fish mobile from plastic bottles.

The message is very clear: It’s time to act; we really have a problem. 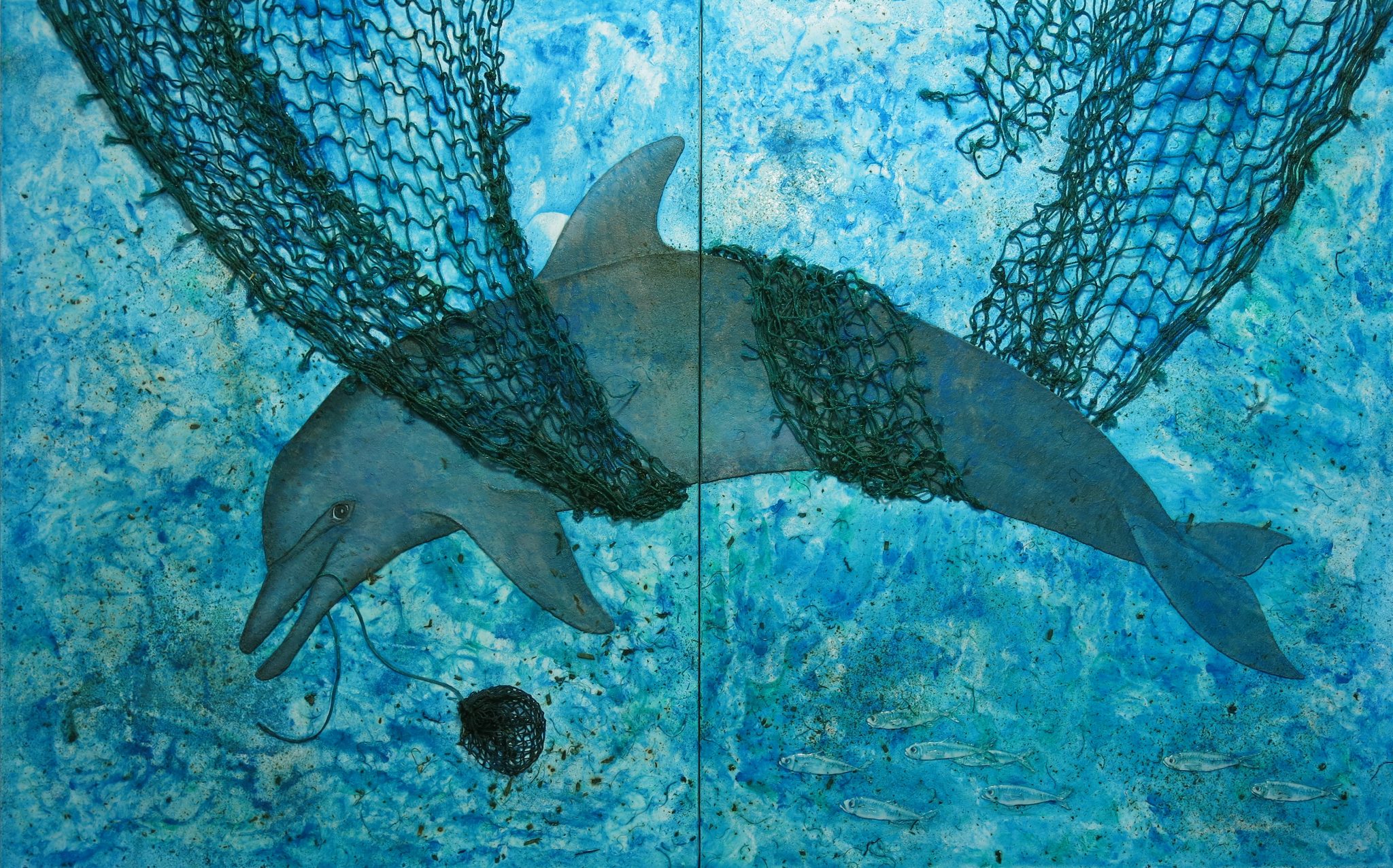 Plastics are making our ocean sick

Time running out for WTO to act on fishing subsidies