In Nairobi this month, the world’s governments will discuss the path towards the first global treaty to tackle plastic pollution. But with multiple proposals on the table, the scope and ambition of a future treaty hangs in the balance.

The UN Environment Assembly, which is scheduled for 28 February to 2 March in the Kenyan capital, could deliver a mandate for an intergovernmental negotiating committee to broker an agreement obliging all countries to eliminate plastic leakage – especially into the ocean – through national targets and plans for reduction, recycling and management.

There’s an incomprehensible amount of plastic in the ocean – up to 51 trillion fragments in surface waters alone. Marine plastic pollution harms animals, which ingest or become entangled in it, while the risk to humans who eat seafood contaminated with it is still unknown.

Much of the plastic entering the sea comes from rivers: a 2017 report found that up to 95% was coming from just 10 river systems, with eight of these in Asia. A lot of this stems from developed nations, who have exported it to developing countries to recycle or dispose of. In 2018, China banned “foreign garbage” after years of importing almost half of the world’s plastic waste.

As well as large accumulations of floating plastic, such as the Great Pacific Garbage Patch, which covers an area three times the size of France, scientists are concerned about microplastics of less than 5mm. These have been found everywhere from the remote Antarctic to the deepest ocean trench.

Nor is plastic pollution restricted to water. Plastics have been detected in every corner of the Earth, from the Arctic to the top of Everest. What’s more, plastic production is a major driver of climate change. If the whole plastics lifecycle were a country, it would be the fifth-largest emitter of greenhouse gases.

While technological solutions to clean up plastic waste are proving successful, and attempts to curb the use of single-use plastics are popular, the challenge remains to limit the production of the material in the first place. Only a global deal can achieve this.

Existing global treaties cover elements of the issue: the Basel Convention regulates trade in waste, including plastic; the International Maritime Organisation is responsible for marine plastic litter from ships; while the Stockholm Convention protects humans against harm from plastic products. However, none represents a holistic tool to tackle the problem at the global level. Unlike for climate change and biodiversity loss, there is currently no international framework to address plastic pollution, despite growing recognition that it, too, could pose a “planetary boundary threat”.

The UN raised the idea of a global response to plastic pollution at the third Environment Assembly in 2017. It established an ad hoc open-ended expert group on marine litter and microplastics to consider what a global agreement would look like.

Momentum has been building ahead of this month’s talks, with 154 states already supporting talks on a new global agreement. Late last year, the UN special envoy for the ocean, Peter Thomson, said at the COP26 climate summit that a treaty in Nairobi would be critical to keeping oceans healthy. More than 70 consumer brands including Coca-Cola, PepsiCo, Unilever and Ikea issued a joint statement in January setting out plans for reducing plastic production and use. Significantly, the US, the world’s largest producer of plastic waste, announced late last year that it would participate in talks.

In order for negotiations over a global treaty to begin, a resolution which sets the scope and mandate for them must first be adopted at this month’s Environment Assembly.

Three such resolutions have been tabled. Two call for a legally binding framework on plastics, which would be the first of its kind. But the differences between the two are significant. 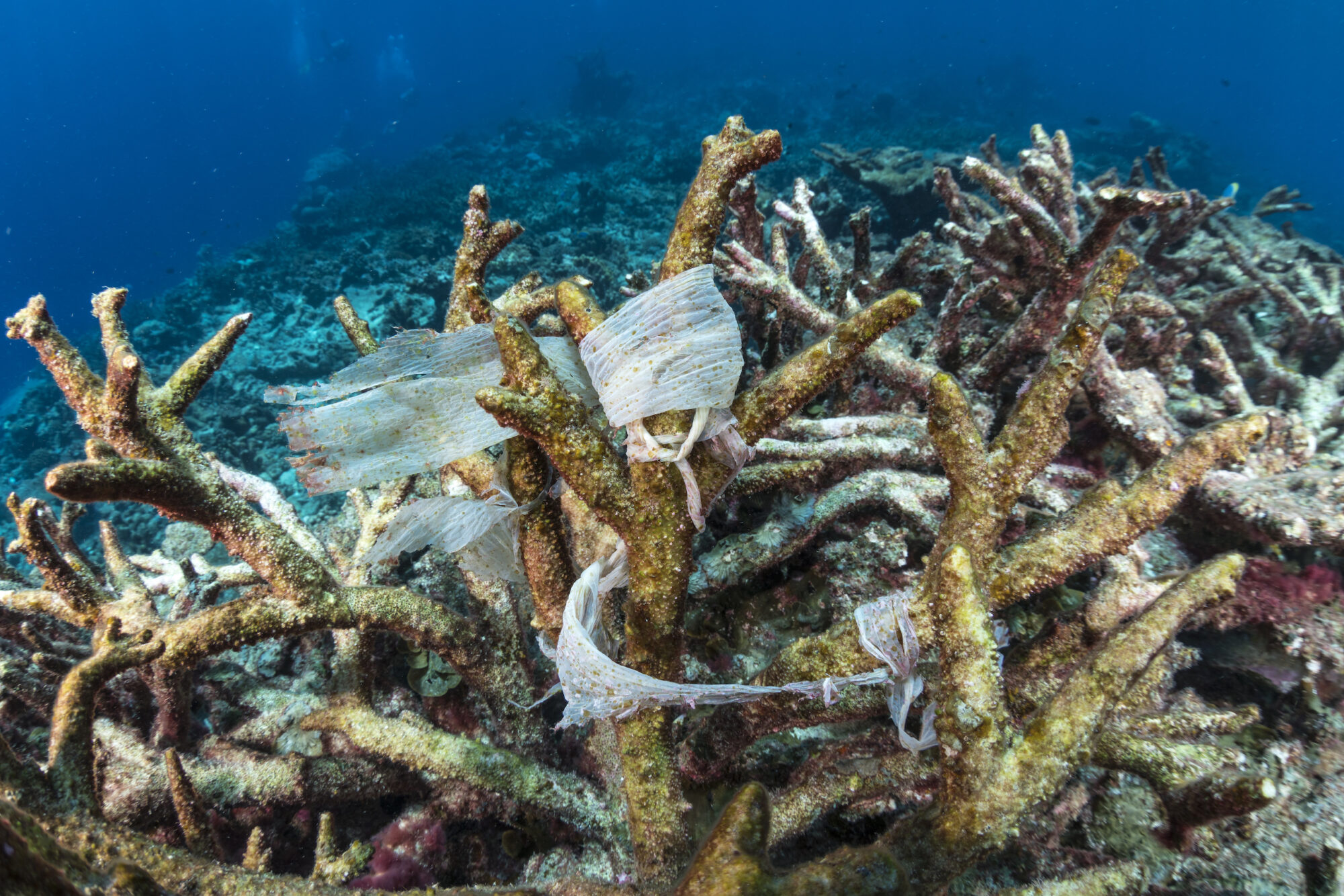 Plastic stuck in bleached corals around Addu Atoll in the Maldives. A total of 154 countries have expressed support for negotiating a global agreement on plastic pollution. (Image: Uli Kunz/Greenpeace)

The resolution tabled by Rwanda and Peru, and co-sponsored by about 50 countries including Norway, Chile, Pakistan and the EU, is considered the most ambitious. It proposes an “open mandate” for a negotiating committee, meaning negotiators could work on a broad range of issues relevant to plastic pollution as discussions progress. It suggests a “full life cycle” approach to plastics, tackling plastic production as well as waste management. And it is worded to address plastic pollution in any environment, not just the ocean.

A second resolution from Japan, and supported by Antigua and Barbuda, Cambodia, Palau and Sri Lanka, is more limited in scope. The resolution specifically addresses “marine plastic pollution”, is focused on management of plastic waste (rather than production), and proposes a closed mandate, which would mean negotiators could only address this aspect of plastic pollution when working towards an agreement.

Meanwhile, India entered discussions at the 11th hour with an alternative resolution on single-use plastics, published on 31 January. Unlike the other proposals, India’s document focuses on a voluntary framework, rather than a mandate for the creation of a legally binding global agreement.

Several UN member states have asked that the two original proposals be merged before the main meeting. “Japan has already started dialogue with Norway,” said Shahriar Hossain, secretary general of the Bangladesh-based non-profit Environment and Social Development Organization. “I believe that nobody is interested in going for a vote, so they will come up with some compromise plan.”

In a statement with the G77 on 3 February, China stated its support for starting negotiations on plastic pollution, calling for “ambitious goals and equally ambitious means of implementation”, pledging to “engage actively and constructively in the negotiation of the different tabled resolutions”.

Christina Dixon, deputy ocean campaign lead at the Environmental Investigation Agency, which published a table comparing the two proposals, said: “The rampant over-production and consumption of plastics, as well as their myriad of toxic additives… has created an environmental disaster that must now be urgently addressed. We are on the precipice of securing a potentially world-changing global agreement on plastic pollution and it is essential that governments remain ambitious on its scope, equipping it with a mandate to look at plastic pollution across its lifecycle and in all environmental compartments.”

Peter Thomson, UN ocean envoy, who will travel to Nairobi to assist efforts on the treaty, said preventing marine pollution is a major component of the UN’s Sustainable Development Goal (SDG) 14, which covers Life Below Water. “The largest and most harmful fraction of that pollution – some 85% – is plastic. We currently dump 11 million metric tons of it into the ocean each year and this figure is projected to double by 2030 and nearly triple by 2040. As responsible residents of Planet Earth, we cannot allow that travesty to continue.”

Manila Bay, in the Philippines, flooded with plastics after Typhoon Yagi in 2018 (Image: Jilson Tiu/Greenpeace)

Andrew Norton, director of IIED (the International Institute for Environment and Development), said low-income countries had ended up as the dumping ground for plastics from richer nations. “Major investment and support will be needed to find viable alternative models for dealing with plastic that properly incentivise more sustainable and just practices in future,” he said.

Gary Stokes, operations director of NGO Oceans Asia, said it was particularly important that negotiations addressed plastic pollution in the form of discarded fishing equipment. “If governments want to seriously address [this], they must look at the fishing industry and hold them accountable,” he said, adding that the UN Environment Assembly “has the potential for a concerted global address of plastic waste, but with so many varied interests involved, from countries to plastic producers, users and NGOs, we fear that this will follow the same lines as the climate change meetings.”

Torsten Thiele, founder of Global Ocean Trust, said finance must be considered at the outset of negotiations “if we want to ensure that an ambitious agreement can be implemented. This will include both appropriate needs assessment and capacity-building as well as institutional funding arrangements and innovative financing mechanisms that engage the private sector sufficiently.”

How does plastic pollution affect the ocean?

Twenty plastic-busting inventions to clean our rivers and seas