The UN has laid the foundation for negotiations to begin on the world’s first legally binding treaty to end plastic pollution. At the United Nations Environment Assembly (UNEA) in Nairobi earlier this month, the parameters were set for a future treaty, including hard-won provisions to address the full life cycle of plastics and tackle waste in all environments, not just the ocean.

The decision on 2 March was met with applause, cheers and tears from delegates of 175 member states. They had gathered to negotiate several multilateral environmental agreements, but most notably one on plastics. “The bottom line is, we will eliminate plastic pollution from our environment,” said Inger Andersen, executive director of the United Nations Environment Programme (UNEP), during the closing plenary.

“It’s a really important step. When I first started working on [plastics], there wasn’t a broad consensus about the scale of the problem, or even agreement that there was a problem,” says Richard Thompson, a marine scientist at the University of Plymouth who has been studying plastic pollution for 30 years, and coined the term “microplastics”.

With plastic production doubling from 234 to 460 million tonnes in the past 20 years, it is now accepted that the scale of the resulting pollution means that neither voluntary nor national actions are enough. Recent years have seen a push for a coordinated global response, backed by a Scientists’ Declaration and popular opinion. A survey published last month by WWF revealed that nine out of 10 citizens in 28 countries believe in the need for a global treaty on plastic waste, with the greatest support coming from Mexico, Peru and China. Even plastics producers and brands heavily dependent on plastic packaging, such as Coca-Cola, Nestlé and Unilever, are backing the idea.

This mounting support came to a head during a week of negotiations in late February, when countries used two proposals for tackling plastic pollution, put forward by Rwanda and Peru and by Japan, as the basis for a final resolution. After days of heated discussion and fine-tuning, a draft of the resolution was tabled for consideration by the world’s environment ministers in the early hours of 28 February, the day the UNEA began.

The adopted text has been called the “most important” deal since Paris. It insists that a final treaty be legally binding, which was not a guarantee at the start of negotiations. It calls for an “end”, rather than a reduction, to plastic pollution, and sets an ambitious 2024 deadline for finalising the treaty. “Countries have come together and said, ‘We want to do this quickly in recognition of the urgency of the problems’,” says Christina Dixon, deputy campaigns lead for oceans at NGO the Environmental Investigation Agency (EIA), who was an observer during the negotiations.

Civil society groups are celebrating the ambitious scope of the resolution, which reduces the risk of negotiators delivering a narrow and toothless treaty. The text asserts that negotiations must focus on ending all plastic pollution, in all ecosystems, not just marine environments (where most policy efforts are currently focussed due to the large-scale impacts there.) This provision is important given river-transported plastic is a major source of ocean pollution.

The industry is always saying, ‘We need a better mop.’ But in reality, we need to turn off the tap

The resolution also uses a generous interpretation of “impact”. Rather than just plastic waste, it considers the well-established risks that chemicals from plastics pose to human health, with microplastics now found in major organs including human placentas.

Crucially, it specifies that a future treaty must address the full life cycle of plastic if it is to succeed. This widens the scope beyond tackling waste to potentially reducing production, especially of single-use products.

“The industry is always saying, ‘We need a better mop.’ But in reality, we need to turn off the tap,” says Christopher Chin, an expert on single-use plastic legislation and executive director of the non-profit Centre of Oceanic Awareness, Research and Education, which was also an observer at the talks. The resolution responds to that need by “looking at plastic pollution in a more holistic way”, he says. 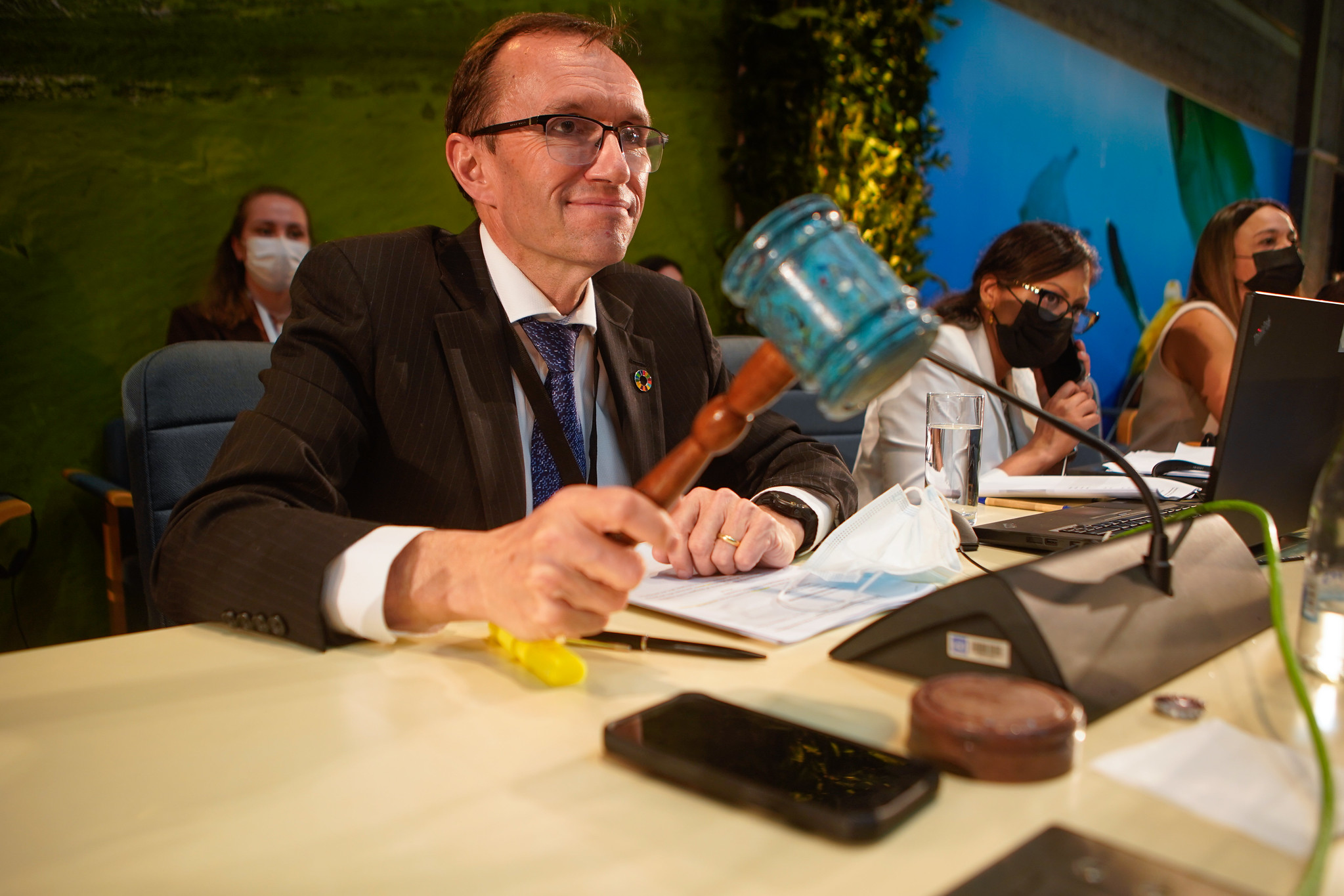 Espen Barth Eide, UNEA president and Norway’s environment minister, passes the plastics resolution with a bang of his gavel (Image: UNEP/Flickr, CC BY 2.0)

The resolution includes provisions for financing, Dixon notes, which will help countries meet their legal obligations once a treaty comes into force. That’s important because, as the text highlights, establishing new circular economies will be key to limiting plastic production, increasing recycling and extending its life: these upgrades will require significant resources in countries that don’t have the capacity yet.

The resolution also calls for national action plans and better plastic production and waste monitoring, crucial to measure progress. It also highlights the role of indigenous and traditional knowledge in forming solutions, and recognises the role of informal waste-pickers in recycling plastic globally.

“Broadly speaking, we’re pretty happy with the contents of the resolution,” says Dixon. “There’s a reference to health, which means that we can have a conversation about [toxins from plastics],” she says. “It talks about sustainable production and consumption, which means we can talk about reporting on plastic production. “Now, she cautions, “is when the hard work begins.”

From resolution to treaty

The resolution establishes an intergovernmental negotiating committee, which will thrash out the terms of the final treaty. Its first meeting is scheduled for May 2022 in Senegal.

Some of the tougher debates will centre around how the treaty enables all countries to enact the necessary changes to their plastics economy – such as establishing circular infrastructure. Colombian lawyer Mónica de Greiff Lindo, speaking at UNEA on behalf of the G77 and China, emphasised that developing countries will need finance and technology transferred from developed countries to aid their transition to sustainable systems of consumption and production. Firming up countries’ obligations for this will be crucial, she said.

Another challenge is creating supportive markets for plastic alternatives and recycled materials. “We see the treaty as an enabler of progress,” said Ed Shepherd, senior global sustainability manager at the consumer goods giant, Unilever, speaking at a UNEA side event. But he added that the low price of virgin plastics may discourage businesses from getting their new products ready for the circular economy. One way for the treaty to correct skewed market dynamics would be to introduce extended producer responsibility schemes that build the costs of plastic waste into production, or to apply a tax on virgin plastics.

Christopher Chin cautions that open-ended wording in the resolution text around the “full life cycle” of plastics could lead to questions about where exactly a plastic’s “life” begins, and therefore who has responsibility to tackle production and waste. “Some people will tell you that the life cycle of plastic begins as a product, or as a polymer, or at extraction,” he explains. On this point, Dixon says the EIA will be watching for lobbying during the negotiations, because the new life cycle focus might bring fossil fuel companies into the picture: “The petrochemical industry hasn’t really had to worry about this until the deal was done,” she says.

Meanwhile, Thompson says that in the inevitable scramble for solutions that this global agreement will trigger, more research is needed to determine what really works. “We’ve got more evidence than we need about [plastics’] harm. What we don’t have as much evidence about is how to apply which solution in which context, in order to get the best traction,” he says.

This will require environmental scientists, economists, materials scientists, behavioural psychologists, and others to come together to find holistic solutions along the entire plastics life cycle, he says. Without this, a treaty runs the risk of enforcing measures that are ill-fitted to the challenge.

In the meantime, Inger Andersen urged countries to take the momentum of the talks back home using Kenya, the home of UNEA, as an example of a country that has recently brought in decisive bans on single-use plastics. “Do not sit back and wait for the plastic treaty to be ratified and signed,” she said. “There is lots that you can do.”

How plastic pollution is being woven into fast fashion culture